Person of the Week: Walt Timblin 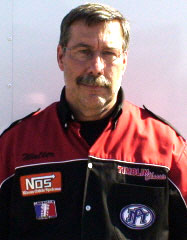 Born May 2, 1953 in Aiken, South Carolina, Walter Timblin grew up to follow in footsteps of the man he most admired, his father. Walt’s dad was a pipefitter and worked in paper mills & power plants. After graduating from high school Walt served five years as a pipefitter apprentice and then eighteen years as a journeyman pipefitter / welder in local union 177. His work as a specialized x-ray welder in the nuclear field helped hone the skills that led to the design and construction of some of the world’s quickest and fastest motorcycles.

In 1978, when Terry Vance made the Suzuki GS 1000 the most sought after motorcycle on the streets by running 9.0’s, Walt just had to have one. Over time he built a swingarm and struts, added an air shifter, etc. and started playing with it at the track. That’s where he met John Davis (father and crew chief to Funnybike Champion, Travis Davis) and got serious about racing. One weekend, he was taking medication and was forbid to race by his doctor. That same weekend, the late Randy Stevens showed up at Twiggs County Dragway without a ride. John convinced Walt to let Randy ride the GS. Randy won the event and secured himself a new ride and team.

In 1999, Walt, John Davis, Randy Stevens, Doug Frierson and Jackie Bryce formed the South Eastern Motorcycle Drag Racing Association (SEMDRA) in an effort to serve the vast contingent of racers in the Southeast United States. Prostar had grown to such proportions that time between rounds took hours plus many could not afford to travel the distances required to compete on a 3-day national event series. The 1-day format was very successful and celebrates its 10th anniversary this year.

Walt’s most memorable day in drag racing was at the 2000 Prostar event at Atco where Matt Smith ran the first ever 200mph pass on a small tire bike, competing in the Top Eliminator class. Walt said, “I still get goose bumps when I think of that day. I remember it as if it was yesterday.” That weekend they won the event running a 201.01 and a 201.43. “Ironically, 201.43 is the number Elmer Trett first ran when he broke into the 200mph barrier,” Walt recalled. Walt and Matt went on to win the championship over Ryan Schnitz that year, which also earned Walt the Mechanic of the Year honors.

Today, Walt is the crew chief for ADRL’s current PXM record hold, Charlie Prophit. Charlie holds the current record at 4.212 in the eighth mile set at this year’s event in Valdosta. Charlie and his brother Matt are the current points leaders in ADRL with Matt sitting in first. Walt said he is astonished at the competition at ADRL with over 40 bikes entering PXM and qualifying within a tenth and a half. If it were a 32-bike field, there would still only be a little over two tenths spread over the entire field. Walt is living the dream. His son Stuart is now working with his dad as a machinist at Timblin Chassis. Walt says, “He is a great machinist and I’m proud to having him working with me.” I guess that Timblin apple once again has not fallen far from the tree.

Favorite movies: Scent Of A Woman