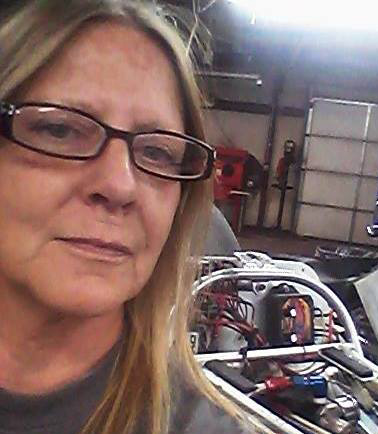 Tamre had a pretty normal childhood. She grew up in Cardiff-by-the-Sea, CA and Dayton/Huber Heights, OH and wanted to be an Oceanographer. She loved the Pacific and the life in it. Growing up, her mother had a huge impact on her wanting to get involved in racing. When she was in elementary school, her mom and a friend entered into a powder puff derby at a local track. Her mother never got to race in the event because her father “forbade” her to do it thinking she would kill herself and leave him alone to raise four kids! She always remembered how her mother didn’t get to do something that she really wanted to do. She said her mom would sometimes put the kids in the car and put the “pedal to the metal!” She was a speed demon and knew how to wear out a clutch.

At about 11/12 yrs old, the McIvain kids in her California neighborhood had motorcycles and raced a lot. Many of the kids at school had dirt bikes back in 1970-71. Her sister, Casi, and Tamre would hitch rides in the canyon. In 1972, after retiring from the Marine Corps, her dad bought her and her sister a Honda CT70 trail bike, packed up the family and camped across the USA for 3 1/2months. They had a blast running all those dirt roads that summer, bugs flying in our mouths and laughing all the while! It was an awesome summer.

What was your first exposure to racing ?

High School, Kil-Kare Raceway in Xenia, OH! A lot of good times and Stroh’s beer there on the weekends with my best friend Judy and her then boyfriend Jeff! Oh the stories! First NHRA experience was the mid ‘80’s, National Trail Raceway. What an experience and got to meet Kenny Bernstein!

Funny story, in 2008, my now ex and dear friend/Mentor Mike Stock raced when he was younger and had for far too many years “talked” about getting back into racing. One day in 2008, I got tired of hearing “the talk” when Mike said something about building a slick and bar bike. I got on eBay and lo and behold there were 2 Kawasaki rolling chassis bikes for sale in Montana by the same owner. Pretty much told Mike there were no more excuses not to do it and thus, Mike Stock Racing was born. Life had not been boring since. 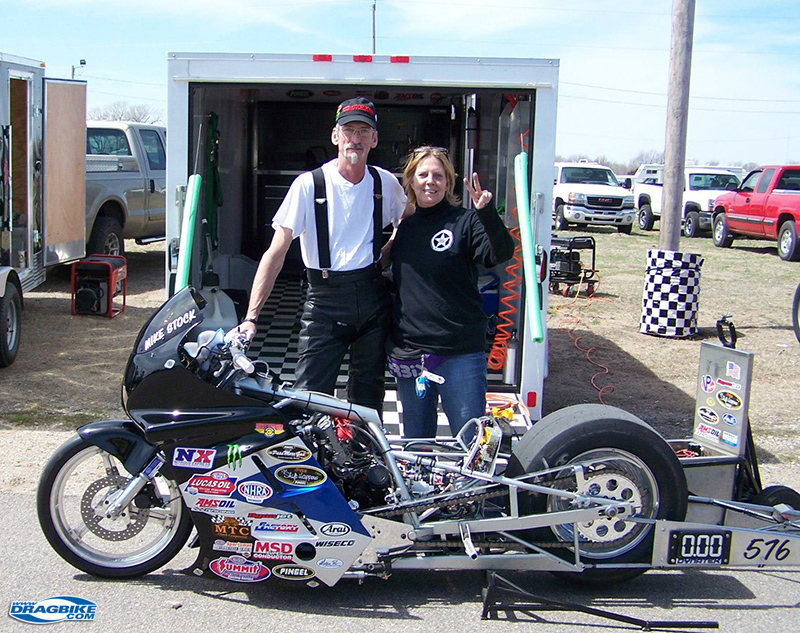 How did you meet your significant other and what is their involvement in your racing?

Wes and I met years ago at one of our local watering holes but I also use to work on his ATV’s. Recently we became engaged. Wes isn’t a racer but is my biggest fan and supports everything I do involving drag racing. The long hours at the track, the frustrations and celebrations and even my out of town racing weekends are all something he supports. I believe my hard working attitude and dedication to the sport is part of what he loves about me.

What year did you start racing or being involved in racing?

2010 but in actuality it was the 2009 season at Kansas International Dragway because Mike and I spent that entire season checking out what the slick and bar bike racers setups and such were while we were building his race bike. 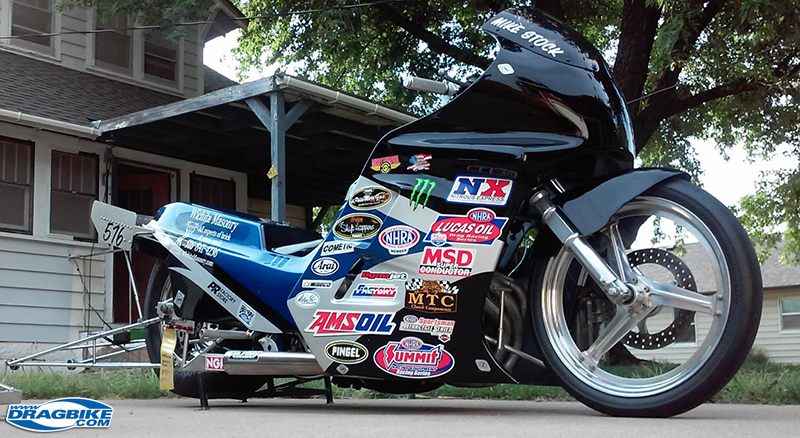 Pro Bike with Mike Stock Racing from 2010 thru 2015. Mike runs an ‘89/’90 Kawasaki ZX10/11 blended motor on a Kosman KZ chassis. We started out running just on motor and for an older setup, we actually got the bike down into the low 9’s those first 2 seasons. Not bad considering the older, mostly stock equipment we ran on in those days, not to mention how heavy the old girl was and still is. By 2012, we were fitting her with Nitrous, battled tons of electrical issues, boxes giving us fits, breaking the chassis once, you name it. Seemed for a while that we’d killed the fun we had been having! Then in 2014,  Mike & I had gotten the “Hoodoo Voodoo Monkey” off our backs and the ‘ol girl started laying down consistent low, low 8’s. I was pretty sure one night that after a damn perfectly sexy 8.02 pass in testing, that on our next pass we were gonna hit the 7’s. That’s when the tranny went “Kaboom!” That ended our 2014 season. Nothing but issues since but I’m pretty sure that after only testing in the 2015 season, Mike’s got new blood flowing thru the old girl for this upcoming season.  I’ve always had some numbers that I believe that bike will run in my head and it won’t surprise me to see that happen this year.

I’ve always had some numbers that I believe that bike will run in my head and it won’t surprise me to see that happen this year. 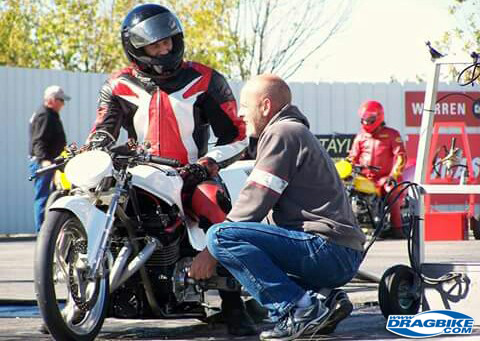 I’m making a “switch” for the 2016 Season. I’ll be helping out in the pits with another team. PMRA series, Pro Open class with Derek Gibson’s 2003 1640cc Suzuki, Todd Athanis chassis, Pro Mod team. Derek is giving me an opportunity to expand my knowledge base this season, of which I’m grateful to Derek for giving me a spot on his Pro Mod team and to Mike Stock for encouraging me to do in light of his work schedule for this year. I’m looking forward to taking a lighter duty on the Gibson team and watching how Derek’s mind works. I’ll be soaking it all in on a higher learning curve this season and am looking very forward to this experience. Gibson Racing is planning on entering all the PMRA events this season, Truett & Osborn Drags and we are also working out details for the trip to ManCup in Memphis. It’s going to be an exciting season.

2015 season was a milestone for me. I got to meet the woman I idolized as a kid, Shirley Muldowney. She is a “hoot!” A day I will never forget. I also attended my first PMRA World Finals and was able to meet and “shadow” Jerry Cooper of Cooper Performance, and the “Preacher Man” as I liked to call him, Grant. So many years of knowledge inside the brain of Jerry Cooper and watching him work with Rod Mansaw and Raymond Marquardt’s bikes that weekend was an experience I will always cherish. 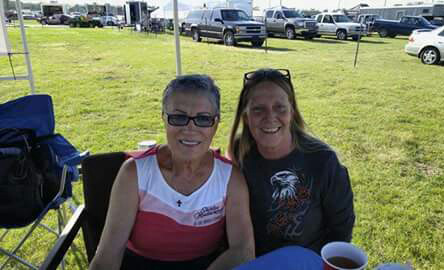 I’d also like to say that there is nothing, and I mean nothing, like the people that spend all their time and money on Drag Bike Racing. We all feel it all over the world from Canada to Australia, Netherlands to the U.S.A. It’s a tight community; it’s family, no matter what track or what weekend. There’s a bond like no other and I feel fortunate to be a part of it all, a part of this Family we call Drag Racing.

Occupation:
Retired – Motorcycle Mechanic
Pit Bitch for  Derek Gibson Racing
I live in the country so there is always work!

Crew Members: Chris Butler and myself.

Sponsors:  Self sponsored with huge “nods” to Chris Wedeman and Mark Rendeluk for all their help and support with Derek Gibson Racing.

Accomplishments: I’m an “old broad” and still able to do this sport.  I believe that’s an accomplishment! Lol 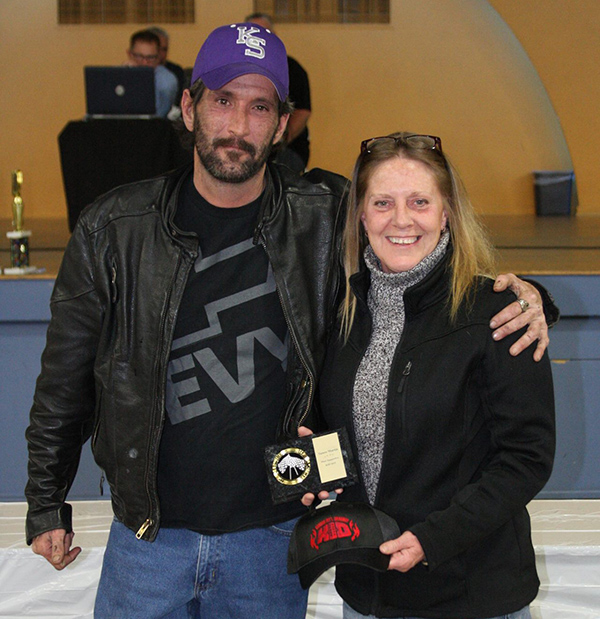 Goals: To never stop learning, never stop loving this life I am blessed with and loving all the folks that are in my life.

Interest outside of racing: COOKING! I also garden, take photos and love to make people laugh. I’m a bit of a “goof” as my Facebook page says it all, lol.

Favorite quote or saying: A recent Facebook test says two of my favorite words are “Mac and Anthony!” Hahaha!

Favorite movie: I love them all!

Hero: Everyone brave enough to Drag Race anything, my Dad and And Albert Einstein!