Harley Davidson and other Motorcycle companies created this method of transportation. These vehicles were built for the wild, free, and adventurous people back in the early 1900’s. Thrill seekers with the wind on their faces became drawn to this vehicle as methods of transportation. It created exciting sports such as Flat Track, Motocross, Grand Prix, LeMans, and Motorcycle Drag Racing. Each one of these sports pushes the machine and human entity to its physical limits. These groups formed brotherhoods of riders and racers that have all experienced the emotions of winning and losing.

After WWII this bond grew into an even stronger group of people, with their Harley Davidson motorcycles they rode during the war. 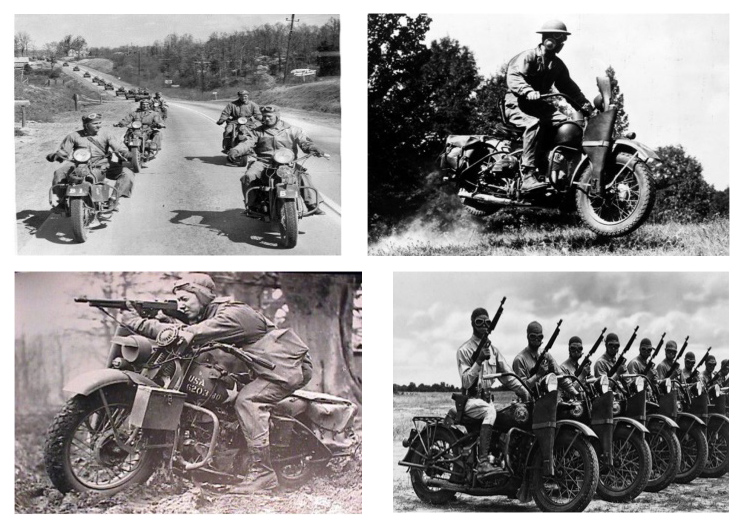 Rather than choosing a foreign-made machine from another country, they had just fought with, and against, they became attached to the American Harley Davidson. These bikes helped the Military win the war, and the army orders establish the Harley Davidson company. It became a symbol of men returning from the war. It seemed to help with their cheating of death memories, that war left etched in their minds. The confidence the Military gave them to survive these life threating times. The life-saving spirit that came to them from the rules, commands, divisions, and camaraderie taught to them by the military life. This way of life became so sought after as instructions to live by and with, in society. The Motorcycle Drag Racing group and it’s Military similarities is the best example of this. The Military divides up into various service groups with each one listed here, and their specialties.  The Airforce, Navy, Marine, Army, and Special Ops which are the elite military member’s group.

The Airforce Brotherhood is the Speed Junkies and known for the money their equipment cost to go fast. They want to be the fastest out there and get their accolades through the cost of their machines. They might race highly modified Hayabusa, which cost a lot of money.The person with the most funds comes up the winner.

The Navy Brotherhood is the “want-a-be,” Speed Junkies and they are running on limited funds and want to be fast but only at so much expense. They might also race a Hayabusa, with much less modification.

The Marine Brotherhood are the crazy members of the groups wanting to be fast. They might ride a Kawasaki, or Suzuki, with turbo’s or an insertion system spaying Nitrous Oxide to give them a Jolt of speed as needed.

The Army Brotherhood are the Sportsmen of the groups; they are more about perfecting their riding skills to become winners.

The above groups are the four cylinder motors called Crotch Rocket style motorcycles. The only group not mentioned are the Special Ops using V-Twin engines. The V-Twin engine is the great equalizer! No amount of money can just buy winner circles using the V-Twin.

Just like in the service what group will put themselves in the toughest situations imaginable and succeed. The military calls them Special Ops. The Special Ops group, outperform all others and are the ones that can do and make something out of nothing. These people are the Hero’s, Fireman, Astronaut, Seal Team members, that are not worried about what other people think. They are in this to become better people by making themselves the best they can be. They are not looking for the accolades from their actions. Just getting the personal satisfaction knowing they have done something most people cannot. The V-Twin motors are so hard to make run fast; you have to spend your apprenticeship time learning and becoming better every day. I am not sure the spectators appreciate that level of determination. The V-Twin racer needs all the following personality traits to compete competitively. They need to be, detailed-oriented, organized, selfless, loyalty, decisive, dedicated, and confident enough to make the V-Twin be a winner.

In the Crotch Rocket groups, if a racer breaks and cannot continue competing, the competition celebrates it as a win. Like the Military Special Ops Brotherhood says, “no man gets left behind.” Every AMRA Special Ops member pitches in to make sure, if there is any way possible that competitor can make it to the starting line the group helps him. The V-Twin Drag Racing truly is a way to live your life. It teaches you how society should act towards each other, and has been a staple in society since the Greek and Roman times.

If you see yourself as a person, I have just described. You should buy a $ 5,000.00 Harley Davidson Sportster, see what it is like to test your personal skills to be in such an elite group. Just be warned, this will not be an overnight undertaking.  It takes time, perseverance, and dedication to become good enough to make your machine fast. You will never find better friends or learn more from people that make a difference in life by helping you shape your abilities for success.

Just think folks if you were to meet the pilot of the SR-71 or an actual Navy Seal from the Seal Team 6, which one would have your attention and admiration.

Even John Force who seemed slightly in awe of this group praised the V-Twin Nitro Harley Drag Bike racing in Arizona on Feb. 25-26, 2017. 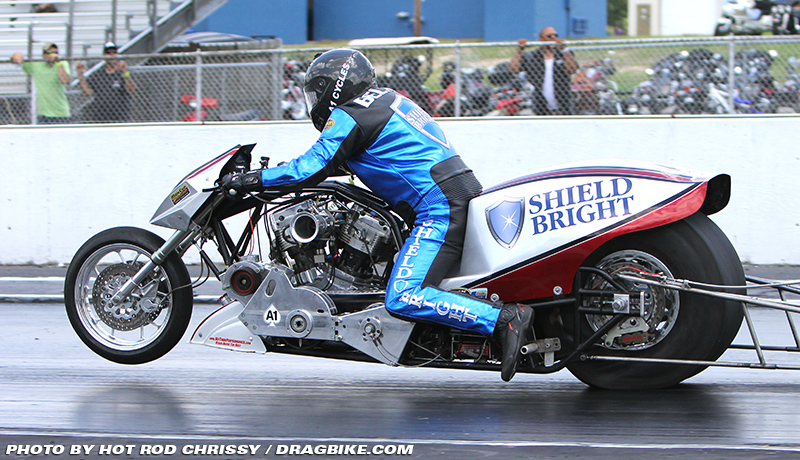 Michael Beland, asks for John’s thoughts about the Top Fuel Nitro Harley Drag races? John said, “Bravest guys in the land, running as fast as us on two wheels, are you kidding me, love to watch them, great sport, and the fans love them, what else can you say.”

Anyone that sees him or herself as a person that has always strived to be the best you can be or that admires those traits. You should watch the upcoming AMRA races and see how your local HERO’S perform.  I can guarantee excitement from, and access to your heroes in the pits.