Who will be the first in the 6.8x zone? All year a lot of people have expected Joey Gladstone on the D.M.E. Racing bike to run the first 6.80 pass. Well this past weekend at the NHDRO Fall Fury, catching us off guard, Jeremy ran a 6.864 at 207.91 during Friday night’s ‘No Time’ session. No one was waiting for it, announcing about it or anticipating it. It was a Friday night and we were all in Grudge mode having a great time. Jeremy’s pass looked fast, no doubt about it. Only 5 minutes after his run did word spread throughout the track that it was a 6.86, so much for the secrecy of ‘No Time’ racing.

Some were suspicious, and all we could do was wait for him to throw it up on the boards on Saturday. And not only did a 6.8x come up on the boards on Saturday, that was all Jeremy was running! Best ET of the weekend was 6.843 at 207.88. We also couldn’t help but notice that Drake Motorsports had Rodney Williford on location all weekend tuning the ‘No Fear’ bike while racing their other bike ‘Ambition’. NHDRO tech led by Joe Marasco tore the bike down to the bone and gave it a passing grade! So it’s official, Jeremy Teasley is the first into the 6.80’s. Now who is going to be the first in the 6.7x’s?

This weekend the Battle Royale at MIROCK is going to hit a whole new level, Drake Motorsports is now the team to beat! Tune into Dragbike.com this weekend and keep up on all the action. 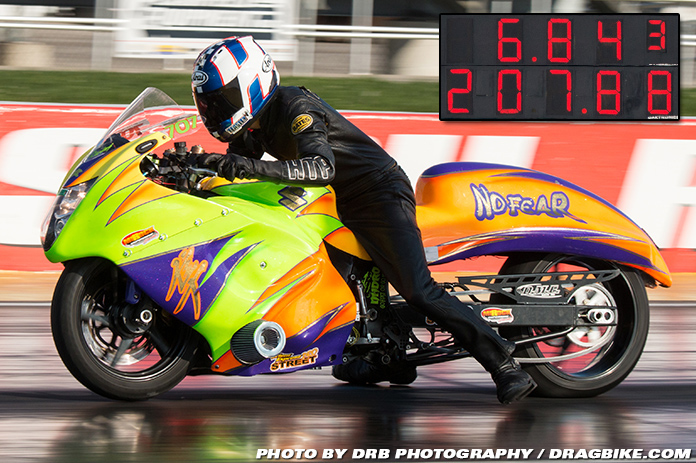