Photo of the Week : Tyler Fisher

Tyler Fisher ran his first 6 second pass in 2013 at the NHDRO Fall Fury aboard the Mark Paquette Pro Street bike. Here was Tyler’s response when asked for a comment about this photo.

“This was our third qualifying attempt at final Indy NHDRO event, the bike started coming up right at the starting line and continued to carry the front tire through 3rd gear before it went airborne and I had to set it down. We went a 7.50@ 196mph on this wheelie pass.” said Tyler “On the next run Mark added 5lbs of ballast to the nose of the bike and made a few slight tuning adjustments, it was the final qualifying attempt and ended up being the final pass of the NHDRO 2013 season due to weather, but the statement saving the best for last came to reality when we went a 6.98 @211 mph!! “My first time, and the bikes first time in the 6 sec. zone which qualified us #2 behind Frankie Stotz” “ In my first season on the bike to go consistent 7.0’s and then put a 6 on the board at the final race it was more than I ever expected” “I told myself before this event that I wasn’t going to try and ride the bike like the majority of other PST riders out there, I was going to ride it the way I learned and grew up riding, I rode it like a bar bike and let my instincts do the rest”. I want to thank my Dad for planting in my head at a young age “the fastest way to go from point A to point B on a race bike is in a perfectly straight line, with as little body movement as possible”. “Also, George Bryce’s PSM school was a big help in giving me success in my rookie Pro Street season, I had the same mentality and rode the bike the same way I rode the pro stock down in Gainesville”. We can’t wait to see what the 2014 season brings, Mark has a great machine and is tuning the bike to go faster and faster with each run. I felt we really started to gel as a team at the end of last year. We have some big announcements coming up for the 2014 race season as well including a second PST bike and a mult- time champion rider coming on board with Paquette Racing! Official announcement to be made this month. I want to thank all our sponsors for supporting us: 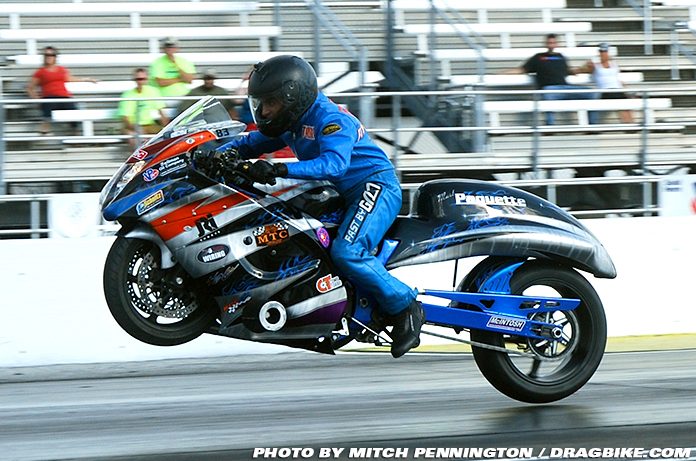