The PMRA kicked off its thirteenth year in grand
fashion. The race was held at Thunder Valley Raceway in Noble Oklahoma, and
was hosted by the PMRA and the staff at TVR, who performed up to their usual
level, which is always excellent.

Seven classes were contested on a cold and windy
day but the competition was intense, especially with the introduction of a new
twist in drag racing … Team Competition ….

The team competition consists of four man/woman
teams and points are awarded for wins, runner-ups, semi-finals and No. 1 qualifiers.
At the first race of the year seven teams signed up for the competition.

The names are somewhat “tongue-in-cheek”,
for example, the name NDART was given to the team from Nebraska because they
seemed to enjoy the beer brackets more than any other class and stands for “Nebraska
drinking and racing team”. Members of the team have won several championships
so they have matured from beer swilling also-rans to true competitors. They
don’t drink anymore, they don’t drink any less either.

Ellis County Dragbikes was a play on words after
Orange County Choppers became popular and at that time most of the members lived
in Ellis County (southern suburb of Dallas); however, most of the members of
this very loose organization do not live in Ellis County, some live as far away
as Abilene, which is three hours west of Dallas. Ellis County Dragbikes is really
more a state of mind than a geographic or ideological organization. Their motto
“mess with me and you mess with the whole trailer park” is indicative
of their state of mind. Ellis County had two teams in competition at the first
race and one of them scored a point.

One of the more colorful teams is the West Texas
Rainbow Warriors, they have rainbow stickers on their bikes and trailers and
wear very colorful leathers. This team is not without its share of controversy,
not only are they not very good racers but the name and colors of the team have
drawn comments such as “Rainbow Warriors, it reminds me of a squad of
gay leprechauns” by Larry the Pit Guy. That comment is not funny but since
the leader of the group looks like a cross between a Care Bear and a Teletubby
they are bound to attract some attention.

The KECA team, who won the first race, is also
a very loose organization. They even have a grand poobah, Larry the Pit Guy,
who calls meetings and makes suggestions on which fruity beer he likes this
week and how to aggravate members of competing teams.

His first order of business was to come up with
a proper name for their team, hence the name KECA….which stands for “Kansas
Elite Consumer Association”…what the heck is that ??????? Well,
it didn’t take long to figure out it really stood for “Kick Ellis
Counties A**”. A name that they vigorously deny, but Consumer Association
???? please, I think not. This team has monthly meetings in which they don’t
get anything accomplished except achieving a level of inebriation that would
make Willie Nelson proud and complain about how the Ellis County team is always
picking on them. 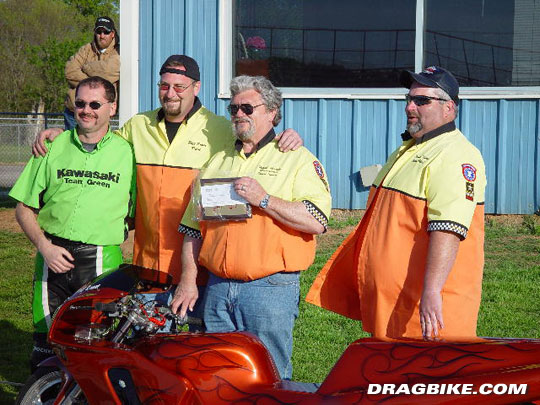 KECA also has a whipping boy, Larry Green, who
was once a Darwin Award nominee but lost out because he survived.

However, KECA won the first race of the year
with seven points, made up of one win and one runner-up. Actually they entered
two teams and they tied for first place, so they can race even if they can’t
drink.

The KC Elite Team didn’t get any points at the first
race, they signed up for the competition but didn’t enter any bikes, makes
you wonder who is making the decisions for the team. They had the Chutzpah to
ask for a refund on the entry fee but the request was denied due to the fact
that they paid the fee without having any bikes at the race….DUH !

Competition for the traveling trophy has already proven to
be intense. Proclamations on who will win the trophy at the May 12th race have
been made and challenges issued. The Rainbow Warriors have warned everyone that
they will “Scratch your eyes out” if anyone makes negative comments
about their colorful leathers and Larry the Pit Guy of KECA is writing his acceptance
speech for Grand Poobah of the year on a Hooters napkin. 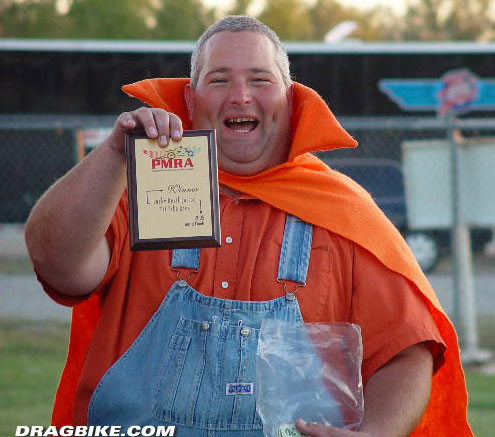 It does not matter which team wins, the competition will be
passionate and the loosing teams will work harder to win the next race. One
aspect of the team competition is the team with the lowest score at the end
of the year has to run the 1/4 mile on foot, in pink tutu’s.