With such a late start to the season due to Mother Nature, PMRA will return to Thunder Valley Raceway in Noble, OK for the 3rd of 6 races for the 2017 season. For our loyal PMRA racers, we will be holding our second of 2 makeup dates which will get us to our normal 6 race schedule. We will be finishing up with 4 races in roughly 6 weeks. The make-up race will be held at Thunder Valley on October 14th two weeks before the PMRA Finals double header weekend that is to be held at Tulsa Raceway Park on October 28-29. Please check out our website at PMRA.net and our Facebook page for updates. With that being said, the upcoming race weekend will surely be one for the ages!

In Mr. Paint Pro Open, we have someone new atop our leaderboards for the first time in a few years with Brunson Grothus leading the way by 76 points over perennial contender Mark Rendeluk. With 4 races to go, this chase is far from over, especially with Brian Lewis, Derek Gibson, Vince Testa, Chris Cutsinger, and others lurking.

Fast by Gast Top Gas has multi-time champ Phil Snare leading the way over some stout competition in Mark Brady and multi-class racer Lucas Townsend. This could be anyone’s race with 4 races left in a short amount of time and the possibility of having something break is high. 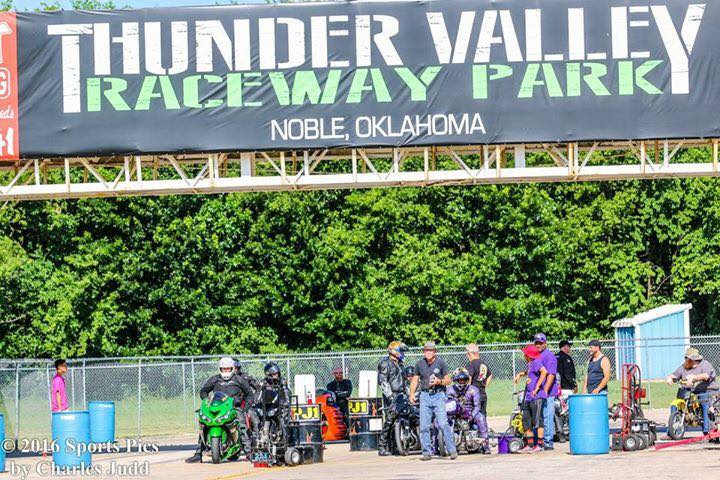 Sea Breeze Pools Super Comp will be a chase all the way to the end if the competition stays as it was during the first 2 races this season. Dwayne Gaines and Mike “Roadrunner” Hudson are tied atop the standings with Nick Johnson and Robert Williams within 45 points. Last year this class was decided during the last race of the season and roughly 1 round of racing was what made the difference.

Super Street is another class where the top 4 are within 30 points of each other, with Lucas Townsend leading the way. Glenn Todd, Josh Pilcher, and Zak Taylor are all nipping at his heels and waiting to pounce to take the lead.

Wedman Motorsports Super Gas has a veteran racer in Jim Miller leading the points for the first time in a couple of years. Brad Smith is keeping him honest with only being 1 round of racing behind. With Jon Haney bowing out of competition in Super Gas we are sure to see a new champion for 2017.

In Pingel Pro ET, Les Knaak is leading the way over Patrick Roetto and Jonathan Whitley by just one round of racing. Pro ET always comes down to the end of the year for the championship and it looks like it will be the same this year!

Schnitz Racing Street ET has 2-time championship runner-up Ben Gartner leading the way with a 200 point lead over the always tough Patrick Roetto and new comer Steve Chanthalakeo. Street ET always has stiff competition throughout the year and the championship is still up for grabs!

With the changes that were made to Synergy Motorworks E Street class allowing bikes with stock clutch and no air shifters, and not just a beginner class, we seen some stiff competition between Kelly Hancock and Thad White each day. They each took 1 win away from the first weekend but no points are awarded in the class. We are hoping to grow this class to prime new racers for the other classes that are offered.

JR Fence Ultra Street will also make a comeback for the September race, with race 1 winner Ben Gartner looking to defend his win against Elyse McKinnon and other challengers. With the main limiting factor being stock clutches and no power adders this class looks to be an exciting one even with it not being a championship eligible class this year. We are looking to increase participation and grow this class in the future, so if you have a bike that fits the class, make sure to join in the fun!

Racers get your maintenance done and be ready to race! Thank you to all of our sponsors and racers for supporting this great sport we all love! See you in Noble!