The most exciting new class for 2007 will undoubtedly be the 9.50 Superbike
class. The PMRA held its inaugural Superbike race at the Season Finale at Thunder
Valley in Oklahoma City. It was a huge success with 25 competitors on a variety
of street legal bikes.

The idea is simple, a class where hot street bikes could compete without spending
a fortune. 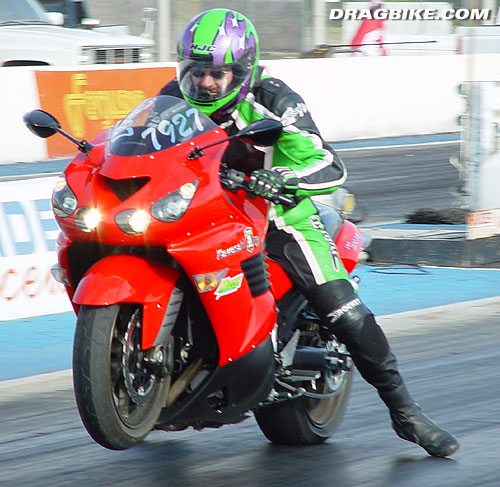 The class was exhibition only in the 2006 season but will be a regular class,
contested at all PMRA races, in 2007. As stock bikes get quicker right off the
showroom floor, a new class was inevitable for street bikes that could run in
the mid 9s. Many new Superbikes are a pipe, arm and commander away from being
competitive in this class.

The picture below is an example of the typical bike in the field. Most were
ZX12, ZX14 or Busa’s but there were a few Bandits and even two Harleys.
There are a lot of “kids” on hot street bikes in the PMRA so the
class was destined to be a hit, and it was, just not with the competitors we
were expecting. 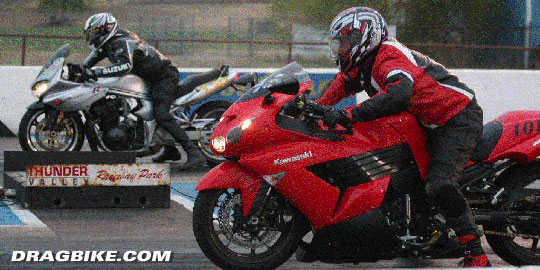 One aspect of the class that took me by surprise
was the age of the competitors, as previously mentioned there are a lot of kids
on hot street bikes and we were expecting a bunch of 18-25 year old competitors
but were surprised that out of 25 bikes most of the riders were over age 30
and at least four were over age 50, including the winner, Ken Emmons. 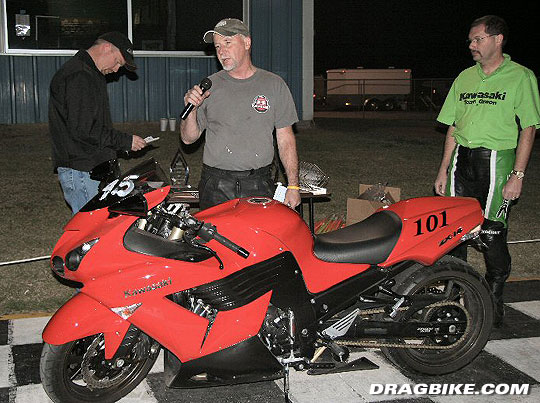 Standing
behind Ken, looking at the list of Pizza restaurants in Oklahoma City, is Mitch
Brown, director of the PMRA and to the right is Dr. Joe, official PMRA announcer
and competitor in Super Bike, runner-up at this event. Ken was thanking all
his supporters, like Depends, AARP and his Dr. at the colonoscopy center.

The rules for this class are very simple, street legal bike, with street tires,
capable of running 9.50, on a pro (4 tenths) tree, no breakout. Its not an easy
class, cutting a light on a pro tree with a street legal bike is a challenge
(see picture on next page). Here are a couple of more pictures from the event. 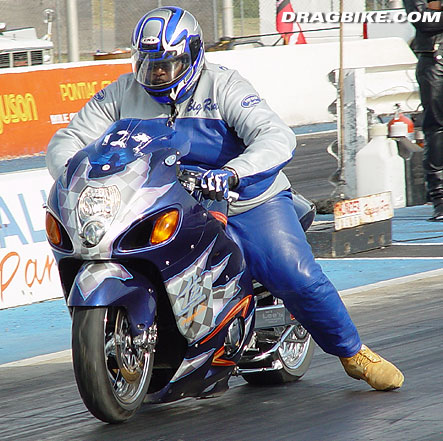 Who says big men
can’t fly, tell that to Big Daddy! Traction problems…I don’t
think so. His biggest problem was slowing down to the 9.50 index. 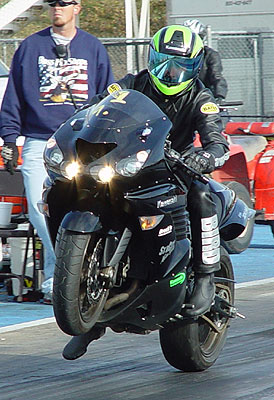 Did I say
cutting a pro light with a street bike is difficult? Two-time Street ET Champion
Joe Bird still ran a 9.58 after a somewhat dubious launch.

Conversations over the winter indicate a number of racers are making plans to
join this exciting class next year.

Several of the competitors were interviewed after the race and these were some
of the responses: Winner, Ken Emmons: “It’s about time we had a
class where old age and treachery could be use to my advantage”

Runner up, Dr. Joe Shaffer: “Why are all three amber
lights flashing at the same time?” Editor’s note: It’s called
a “Pro-Tree” Buddy Morahan, Age 68: “These kids with their
rock and roll music, this place is going to the dogs, back in my day we raced
on dirt and real men…… truncated for space considerations.

Big Daddy: “I thought there was going to be a buffet
after the race”

Joe Bird: “Tell Ken to stop picking on me”

John Choat: “Can I get a discount on my entry fee with
my AARP card?”

All things considered it was a great race
and will be a great class in 2007.

We anticipate a two-fold increase in competitors next year. 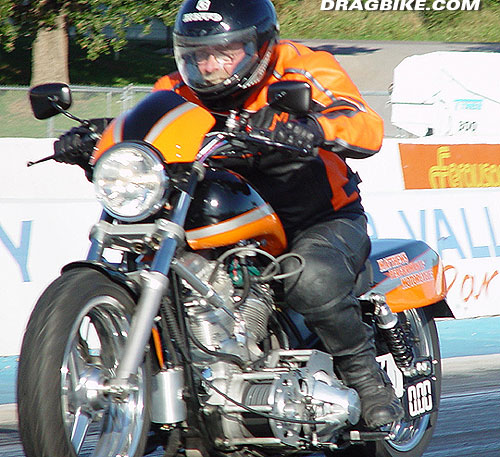