PMRA: THE DLORAH LEE, DAVE HOWELL AWARD
The most coveted award given in the PMRA is not for Racer or the Year, not for
Mechanic of the Year, not for Crew Chief of the Year, not even for a class championships,
its for the person who has given the most to the sport of Motorcycle Drag Racing.
It is named after two very important people who have left us a legacy of passion
for our sport of motorcycle drag racing. The heritage that is Dlorah Lee and
Dave Howell belongs to all of us but at the end of each season the racers decide
who best has embraced their legacy.

And what is that legacy:

Taken from February 2002, AMERICAN DRAG NEWS:
”If our community of racers were Dlorah’s family, the motorcycle
racers became her children. Even in the last two very difficult years, Dlorah
made every effort to be at the PMRA and other areas motorcycle races. She never
stopped lobbying for more pages for motorcycles and the motorcycle racers were
never far from her heart or thoughts. Perhaps no one else knew that her secret
desire was to have her own, all motorcycle drag racing paper.

I think Dlorah’s reward was becoming part of our community. She loved
getting to know the racers, their families and all involved our sport. Her unique
perspective gave us all new insight to our sport and our lives. If you ever
had the pleasure of meeting Dlorah Lee, even for a moment, you couldn’t
help but smile. Because chances are, she was smiling and she told you something
that you had never considered before.” 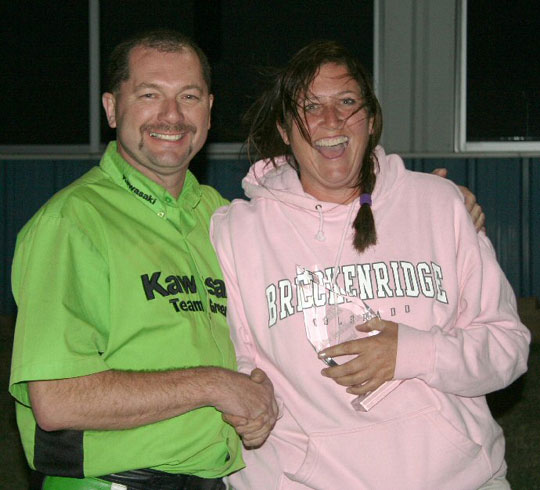 At the end of the 2007 season the racers of the PMRA selected a special person
as this years recipient, Ms. Marsh Crook, the track manager at Thunder Valley
Raceway in Noble Oklahoma.

It may be a little unusual for a racing sanction to vote for a track manager
as a recipient of its most prestigious award but it wouldn’t seem unusual
if you knew Marsha. She is a very likeable person who treats everyone in the
PMRA like family, as can be seen in her photograph she is a shy wall-flower…ha,
actually she has never met a stranger.

The PMRA has been racing at TVR for 13 seasons and Marsha has always been a
big part of making the PMRA a success. She makes sure that the track is prepared,
the pits are clean, the track is properly staffed and well, you know, all those
things that go into making a track a good place to race. She can be seen working
the booth at the front gate, driving the big sweeper through the pits, in the
tower even down in the staging lanes making sure that everything is running
smoothly.

But if all she did was make sure the track ran smoothly she probably wouldn’t
be our Dlorah Lee/Dave Howell recipient, the reason she was voted this award
is because of her care and concern for every racer. She is a cherished member
of our racing family. When her name was announced at the awards ceremony the
place went crazy…. We love Marsha !!!!