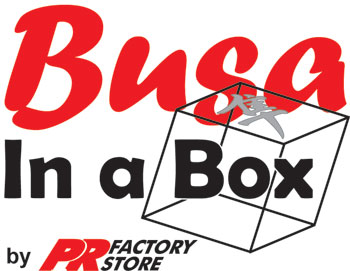 Busa in a Box

At the birth of the Suzuki Hayabusa the sport of motorcycle drag racing changed forever. In the old days, when the drag racing bug bit, you had two choices: buy an existing dragbike or build it. Street ET was developed partly to give the Hayabusa customers an introduction into drag racing. Aftermarket companies quickly started building aftermarket parts but it was the true drag racing elitist that started to conform the Hayabusa into true dragbikes. The problem is, there are far more people who have a need for full chassis Hayabusa dragbikes than have the machinery or experience to build such a bike. 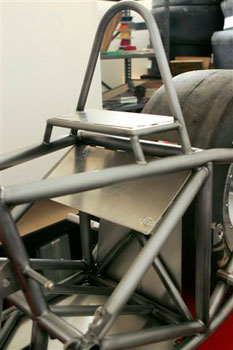 Don Plesser, owner of the PR Factory Store, has solved the problem by introducing the “Busa in a Box” to the drag racing community. A four stage project where the average guy with a starter set of metric tools and a rubber mallet can take a bone stock Hayabusa and turn it into a full-blown Top Gas dragbike.

The idea was birthed through a discussion between Don Plesser and Sandy Kosman, of Kosman Racing. They were brainstorming about coming up with a project that was “repeatable.” For decades Sandy built bikes that were a little different. Custom bike building adds cost and waiting time for an order. Sandy recognized this problem as a builder and Don recognized it as a consumer. This discovery also led to Sandy building G2 Pro Stock bikes.

NHRA Pro Stock racer and PR Factory Store, Race Pak customer, Craig Treble encouraged Don to look at the Hayabusa. At the time, Craig already had a big tire Pro Stock style chassis with a stock Hayabusa engine. With only carbs and a slider it ran an impressive 8.70. That opened up the term coined by Kosman “repeatable” to be attached to the Busa.

Don is no stranger to what it takes to build a dragbike. That’s why he has developed a system to make it easier for both the newcomer to the sport and the seasoned veteran that simply does not have the time to build a “from scratch” race bike. Even better, it’s the perfect bike to make the jump from streetbike to full chassis dragbike without the hassle of welding and fabricating. 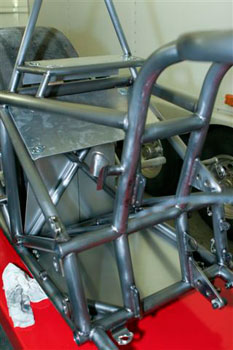 To give you a little of Don’s background, he started drag racing during the bicentennial (1976, the two hundredth anniversary of the United States of America, for you youngsters). He started out racing a Honda 400-four and worked his way up to Pro Stock, winning the AMA Dragbike Pro Stock National Championship in 1983. Nearly a decade later, Don competed in Pro Comp winning an IHRA event in St. Louis when selected pro bikes ran at car events. Don also briefly ran in Top Fuel until Prostar wrote the “Don Plesser rule” to keep racers from racing their Pro Comp bike in Top Fuel. It was allowed until Don advanced to the final round against Larry McBride and took home big bucks. Between the Honda and Top Fuel, Don raced a plethora of bikes that included one the first Vance & Hines engines with top end serial number 50. He ran Pro Stock until Jack O’Malley, of Orient Express, built Don a nitrous motor for Top Gas as a bridge to Pro Comp. There is a lot more racing to talk about, but let’s get back to the “Busa in a Box.”

Each bike Don raced is a testimony to the numerous hours dedicated to taking someone else’s “one-off” chassis and taking it to race ready. The “Busa in a Box” is Don’s answer to offering a product that is easy to build and easy to maintain. The beauty is that the “Busa in a Box” can be purchased in stages that will take the purchaser’s new ride from Mild to Wild. Well, if you call a 10” tire chassis bike that runs 8.70’s @ 175mph in the Stage 1 trim, mild.

So, what is a “Busa in a Box?” A “Busa in a Box” is an all-inclusive chassis that has all necessary bolt on components to create a complete package. NO WELDING; NO MACHINING NECESSARY! All you need is the previously mentioned tools and the ability to follow a simple set of instructions, much like you used to build muscle car models as a kid. No glue required, but you will need grease to pack the bearings. Then you will be the proud owner of a roller. 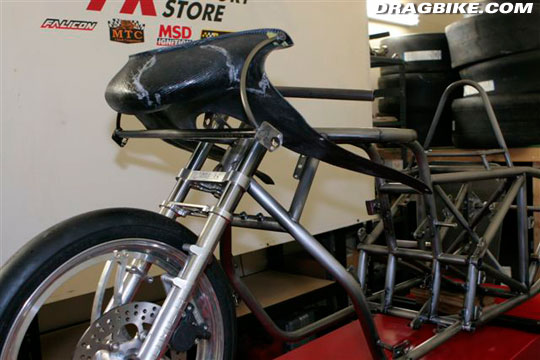 To bring the original project together, Don called upon legendary Top Fuel racer and chassis fabricator, Sam Wills, owner of Racing Innovations in Oklahoma. The chassis is composed of 4130 chrome moly constructed on a bike jig utilizing heli-arc welding to NHRA specs. The design also incorporates the maximum distance between the crank shaft and rear wheel possible. This allows for smoother launches and down track stability. Although NHRA legal, it will not pass NHRA Pro Stock rules due to the fact that the body does not pass the NHRA template rules.

The Stage 1 kit comes with all the tabs welded in the right locations, nitrous brackets, mounts, steering stabilizer, air shifter mounts, exhaust mounts, brakes, front end spacers, and rear wheel spacers. The front end, rear end, wheels and components are from Precision Metal Fab Racing (PMFR). Again, no fabrication necessary. The front end and rear end simply bolt on. The most complicated part about bolting the chassis is packing the bearings. It can’t get any simpler.

Don’s choice for the body was none other than Beasley Fiberglass. Ben Beasley custom-made a fender to fit the PMFR front end. The “Busa in a Box” is delivered with the Hayabusa body mounted. One less worry for the consumer! 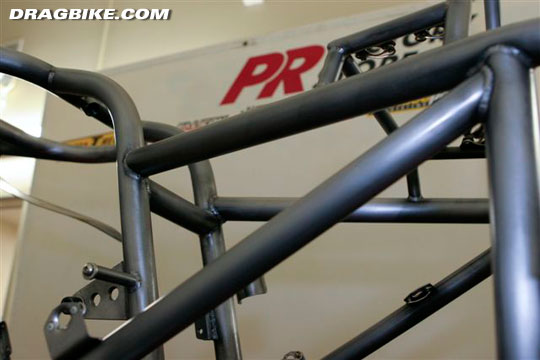 As the “Busa in a Box” concept was being formed, Don also thought to showcase the products that the PR Factory Store represents and sells. With that said, the mounts welded on the chassis are made for particular manufacturer’s products. Otherwise the end-user would be back to welding mounting tabs to the chassis to fit the one of hundreds of aftermarket manufacturer options. Mounts for the air shifter will fit Pingel products, mounts for ignition systems will fit MSD products, mounts are also included for a Racepak Data Collection System. Additional mounts for Holley nitrous systems as well as mounts for a Vance & Hines Sidewinder exhaust system. The advantage of the 4 into 2 into 1Sidewinder is that it drops 66% of the exhaust weight from 30 lbs to just over 10 lbs adding 2 horsepower all the way through and 3-4 pounds of torque.

Not that all these products are needed for a Stage 1 race bike. The kit does allow for performance upgrades included in other stages. But, if your preference is to utilize other brand products, this can be done but will require modifications from the end-user, but that somewhat goes against the principle of having a fabrication free all inclusive kit in the first place. 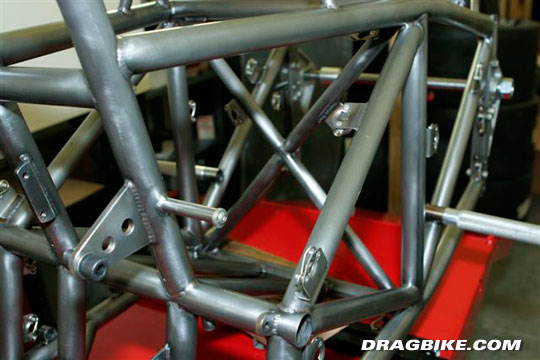 Although the “Busa in a Box” does not come with an engine, Don obviously needed one to build the concept bike. You are certainly welcome to use a bone stock Hayabusa engine, but I’m sure if you are investing your time and money into stepping up, well by all means, step up.

In an upcoming article, “Stage 2,” we will be looking at the engine package Don used which features some of the best names in the industry like Vance & Hines, MTC, Falicon, Robinson Industries and MRE to make up the engine package. Additional future article “Stage 3” will cover electronics, including Data Collection, Ignition, Fuel Injection wiring and more.