The last time 2009 world champion Hector Arana Sr. visited the winner’s circle was in 2015 at Atlanta Dragway, the site of this weekend’s 37th annual Lucas Oil NHRA Southern Nationals. Now more than ever, with his team’s title sponsor — Lucas Oil — supporting the race, Arana Sr. hopes to repeat the feat on his Buell V-Twin.

“It’s great that Lucas Oil jumped on board a few weeks ago to become the sponsor of this race because it’s always been a stop on the tour that I enjoy,” Arana Sr. said. “Any time you have a drag strip where you’ve done well in the past, it gives you that extra feeling of being relaxed. You have positive thoughts in your head instead of ‘oh no, that’s where such-and-such happened.'” 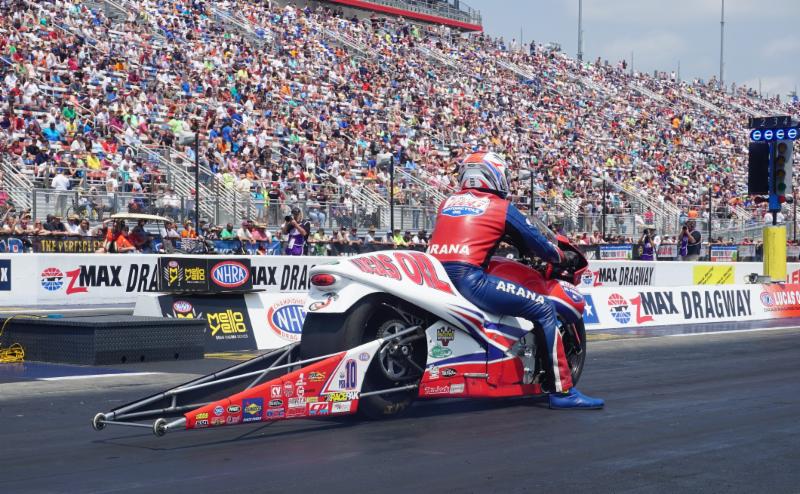 Aside from his 2015 victory, Arana Sr. raced to the final of this event in 2010, when he finished second to five-time world champion Andrew Hines. Arana Sr. also was the top qualifier at this race in 2010 and 2012 on his Lucas Oil bike.

“When I think about how to prepare for Atlanta, the first thing I do is check the weather,” Arana said. “The weather always plays a role wherever we go but I’m not sure it changes as much from hour-to-hour and day-to-day as we’ve seen in Atlanta.

“Because of that you have to be prepared for anything. You have to look at past runs you’ve made in humid conditions, hot conditions, cooler conditions, running on a green track right after rain, all of it. This place is a good test for your abilities as a crew chief.”

As they have all year, Arana Racing will utilize the tuning talents of retired two-time Pro Stock world champion Jim Yates, who can recall his two victories at the facility in 1997 and 2001.

“Jim’s been a big help already and as he becomes more familiar with the bikes and how we’re a little bit different than the cars he drove and tuned in the past, he’ll become an even bigger help,” Arana Sr. said. “We all work together: me, Jim, my son Hector Jr., we all talk about what we think will work. That’ll never change.”

Before he gets started at the track, Arana Sr. will enjoy the exclusive Night of Champions gala at Coca-Cola world headquarters in Atlanta. The special event honors all of the professional class champions from the last 16 years since Coca-Cola has been involved as sponsor of the NHRA series.

“I look forward to this party every year,” Arana Sr. said. “You look around that room and feel a very big sense of accomplishment. It also motivates you to win another championship, which is exactly what we want to do for Lucas Oil.”