I would like to start by saying how sorry I am
for being away so long from writing product reviews for Dragbike.com and you
my fellow racers. With that said, I would like to introduce you to one of the
hottest new products to arrive on the racing scene in recent years, the UCS1
Cycle Stand from Cycle Cat. 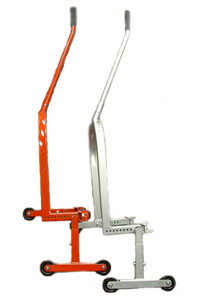 This new cycle
stand represents a new and much improved way to raise your bike on a rear stand
with out any help from anyone and without the tension of wondering if your bike
is going to fall over. If you are a racer or anyone who has ever used a standard
rear wheel stand, you know how hard it is to balance your bike upright while
trying to get the rear stand placed properly all at the same time. Normally
you would ask a friend to balance your bike upright and then someone else positions
the stand to raise it. Well not any more! The USC1 actually is engineered for
you to raise your bike from the kickstand position to sidestand position and
raise it geometrically correct every time without the assistance of another
person. I know what you’re thinking, how can that be you ask? Well, the
boys at Cycle Cat figured out how to make a stand that actually pivots to one
side to match up to the slanted angle of the rear swingarm and allow you to
lift the bike without the strain or worry that it will fall while doing so.

The stand is made to angle towards the kickstand as you bring the stand in to
place, then as you lower the arm to raise the bike; it automatically lifts your
bike in to a straight up position on to its mounts. How you ask? It’s
all in the geometry of the pivots of the arms that moves in a synchronized manner
as you lower the lift arm.

The USC1 is the result of a 6 month development program from the boys at Cycle
Cat and was built for the professional and experienced riders and mechanics
who know simplicity and the elimination of risk are mission critical. Even if
you have never raised a bike before with a rearstand, the new USC1 actually
makes it almost fool proof for the beginner. With that in mind, they created
a system which takes a bike from sidestand to rearstand in one motion, and which
is so stable and easy to use, that it is not even necessary to physically touch
the motorcycle. Think about it folks, in one easy movement, you have lifted
your bike up without even touching your bike! It works smoothly and efficiently
with any (dual swingarm) bike, with or without spools. Designed as a true solo
tool, it’s safe, and actually a pleasure to use. 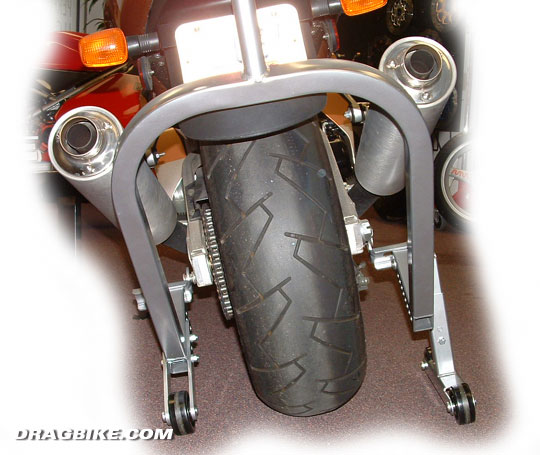 The USC1 is the proud winner of Motorcyclist Magazine’s prestigious MOTY
award for the best new product of 2005. All USC1 kits include fittings for both
under–swingarm and spool use. There are no extra attachments to buy, everything
is included. As with everything that Cycle Cat does, the USC1 rearstand is built
for professional duty. Constructed of welded and powder-coated steel tubing,
the USC1 provides a stable, solid platform, and more. The handle is removable
which allows for storage up close to walls in your trailer and shop while eliminating
trip hazards. 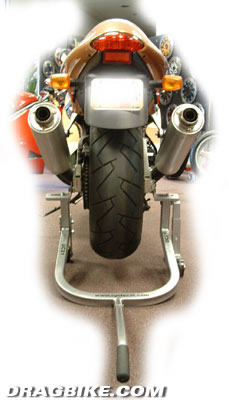 The whole system is so strong, and geometrically
so correct, that a bike can easily be rolled around while on the stand. The
USC1 is a Patent Pending breakthrough design. Available in both red and silver,
all kits come complete with adaptors for both spools and underarm swingarm lifting,
making it universal for dual-swingarm bikes. 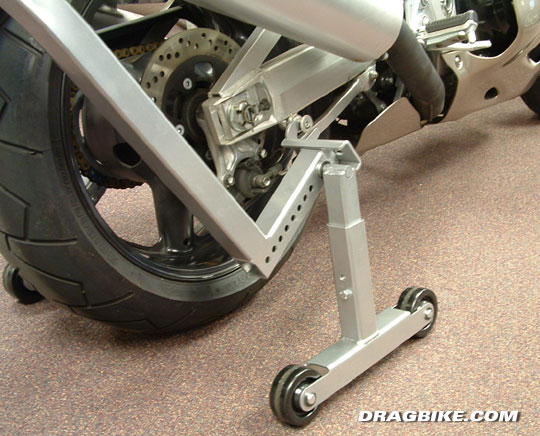 Bottom line, the USC1 is a great example of what
Cycle Cat’s all about. Those guys just love problem solving. The USC1
represents the result of looking at a real issue – the awkward, tedious,
and risky balancing act required to single-handedly, put a motorcycle on a rearstand.
It represents the response to input from professionals who confessed that though
very experienced at lifting a bike, they had dropped one or two in their career.
If you have dropped just one bike one time, you’ll have paid for this
stand 2 – 3 times over.

For the little extra money you’ll spend
for this product, you’ll have saved probably thousands in repairs of bikes
falling over in its lifetime and yours.
I just love my new USC1, and you can too! Don’t delay; check out this
and all the new products at Cycle Cat.

This product however,
does not work with a single sided swingarm bike.

Cycle Cat can be contacted at www.CycleCat.com

Until
next time, safe racing to all.

Guy Caputo can be reached
at GuyCaputo@buckeye-express.com