The drag racing-crazed nation of Kuwait finally saw the opening of its long-awaited new dragstrip at Kuwait Motor Town last week, and the result was an over-the-top festival of big horsepower and good times. Fans overfilled the temporary bleachers and packed in along the fences—cheering, jeering, applauding, and overall showing big love for the sport—even at test & tune!

And drivers delivered on-track action that was just as big, racing through the night and into the wee hours of Saturday morning as the Kuwait International Drag Racing Championship ran out its ladders for thirteen classes. 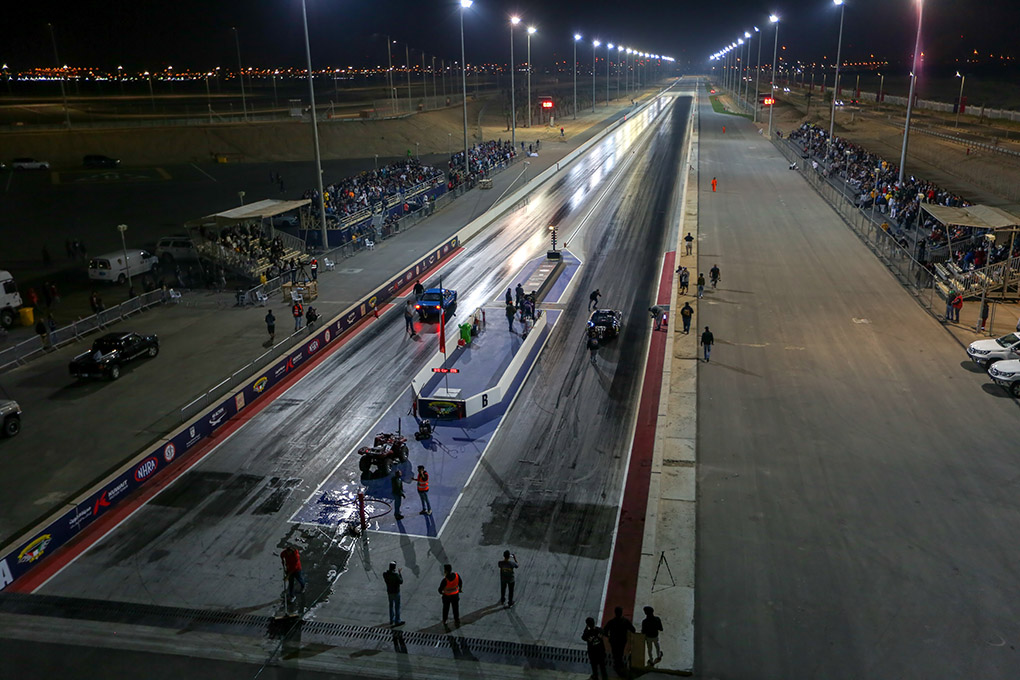 Bahrain racer Ali Haji bears more than a passing resemblance to “Léon: The Professional,” so it’s only fitting that he applied the hit on KMT’s first Pro Mod race.

Haji normally races his black, split-bumper, Q80, 1970 Camaro in 4.50 Index, but entered Pro Mod at this event “for testing.” That testing excursion landed Haji a cool $30,000US when number one qualifier Turky Al-Hemady (3.96 at 324) rolled the beams on the two-step in the final aboard his true Pro Mod, Q80 Camaro.

“I got lucky,” said Haji, who works a day job in ground operations at the Bahrain airport. “Between my cars and Turky’s, they are very different in power.” Haji’s car has run a best of 4.40 and he expects to be entered back in 4.50 next time out.

Even an old drag racing sage like Bret Kepner was impressed with KMT’s 4.0 index class. Basel Abbas launched his fire engine red Corvette to a big .072 to .228 lead at the tree in the 4.0 final. His opponent Salem Al-Temeemi (number one qualifier) then ran much closer to the dial-in with a 4.35 in his former Gotham City Pro Mod, but didn’t make up the difference and Abbas won with a 4.46.

Q80 rider Meshal Al-Saber laid down a killer .002 light and was off to a big lead on his Brad McCoy-tuned Suzuki in the Pro Bike final. Drag 965’s Mohammed Bourashid had a decent .021 himself and passed Al-Saber when Meshal’s bike wouldn’t shift. Bourashid then grenaded his own motor but still had enough steam to leg out the win.

Mohammed “Big Mo” Al-Awad qualified number one with a William Garner-tuned 4.02 at 284 on his carbureted bike, but let himself down with a .221 light against Bourashid in E1. 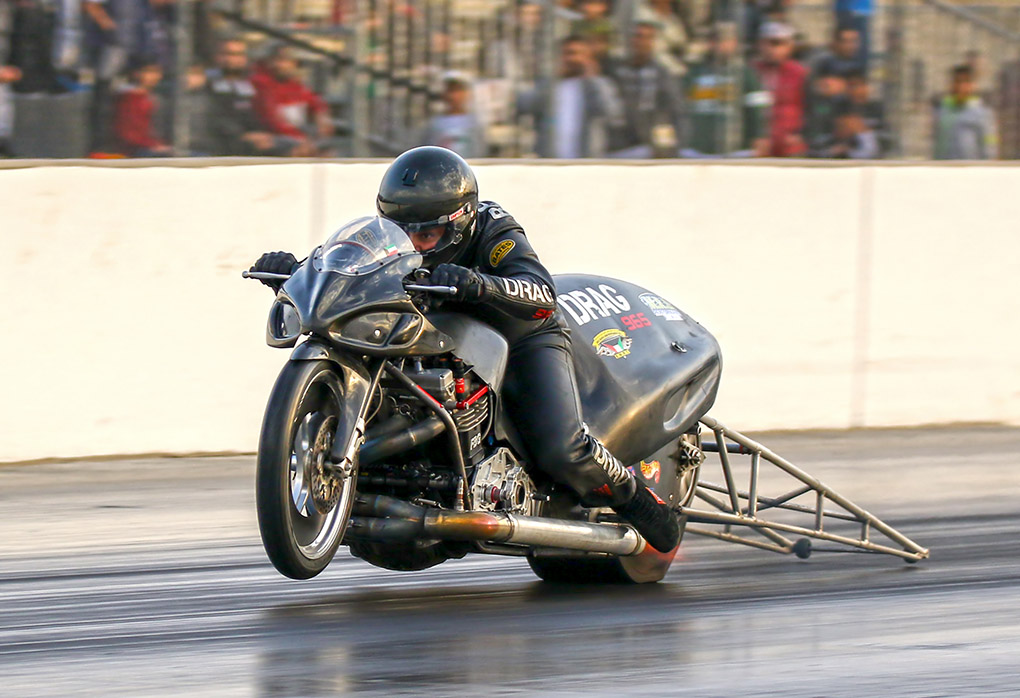 Bahrain’s Hussain Mohammed won a rousing, all-white Mustang, Pro Super Street final against Majed Al-Enazi. It was close at the tree with Al-Enazi taking a .012 advantage. Both cars raced side-by-side with steady flames pouring out of their bullhorns, but in the end it was Mohammed to the front with a 4.34 at 263 kph to Al-Enazi’s 4.59 at 246. Number one qualifier Jaber Al-Magrahbi (4.24 at 310 kph) lost to Al-Enazi in round one.

Although their colors varied, Super Street was also an all-Mustang final. Number one qualifier (4.51 at 258) Mohammed Al-Mutairi’s Carolina blue mount was running like a bracket car, ringing up a 4.380 in the semi and a 4.388 at 253.94 kph in the final.

Mezher Tannak’s passes were even more tightly packed—a 5.195 in round 1 and a 5.193 in the final after taking the tree on a round 2 broke bye. But compare the two driver’s numbers and you can see that Al-Mutairi found himself on the winning end of the pair when the win light came on in the final—especially with an .060 starting line advantage.

Ahmed Al-Juhail’s .011 light bought him plenty of breathing room against number one qualifier Naser Al Shatti’s .156 in the 4.50 Index Dragster final. Al Shatti ran closer to the index with a 4.54 but couldn’t make up the difference, and Al-Juhail’s 4.57 lit the win light.

Veteran Saudi Super Street Bike racer Mishari Al-Turki always knows how to take Fahad Al Hamoud’s tune-up and carry it to the finish line on his 75-inch wheelbase, turbocharged Suzuki Hayabusa. Number one qualifier (4.40 at 274.36) Al-Turki’s .072 light started him out in front of Bader Bin Eidan’s .143. Feet on the footpegs right out of the gate, former eighth mile, no-bar, world record-holder Mishari’s smooth, steady and straight pass of 4.41 at 268 kept him ahead of Bader’s 4.60 at 275. 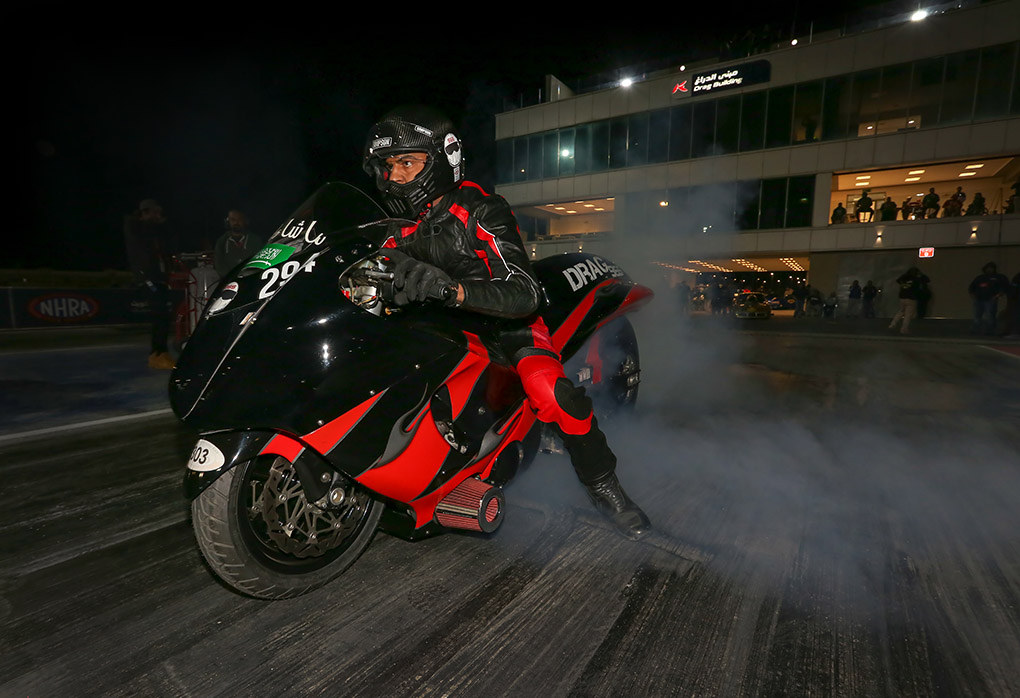 Bin Eidan was up in another final, this time the Streetbike class. Wheelbase for these bikes stretches from 60 to 64 inches based on rider weight, and big all-motor strokers lay down their power through any clutch you want as a long as it isn’t a slider.

Bader’s “Bin Eidan blue” bike faced Mousa Al-Buloshi’s Jason Dunigan-esque ‘Busa, which ran as good as it looked. Bader could have helped himself on the tree, giving it up with a .276 to an .080 for Al-Buloshi. But from then on, both bikes were locked together, with Al-Buloshi taking the win with a 7.98 to Bin Eidan’s 8.00. Number one qualifier Fahed Al-Harbi (7.65 at 288.58) lost to Al-Buloshi in round 2. 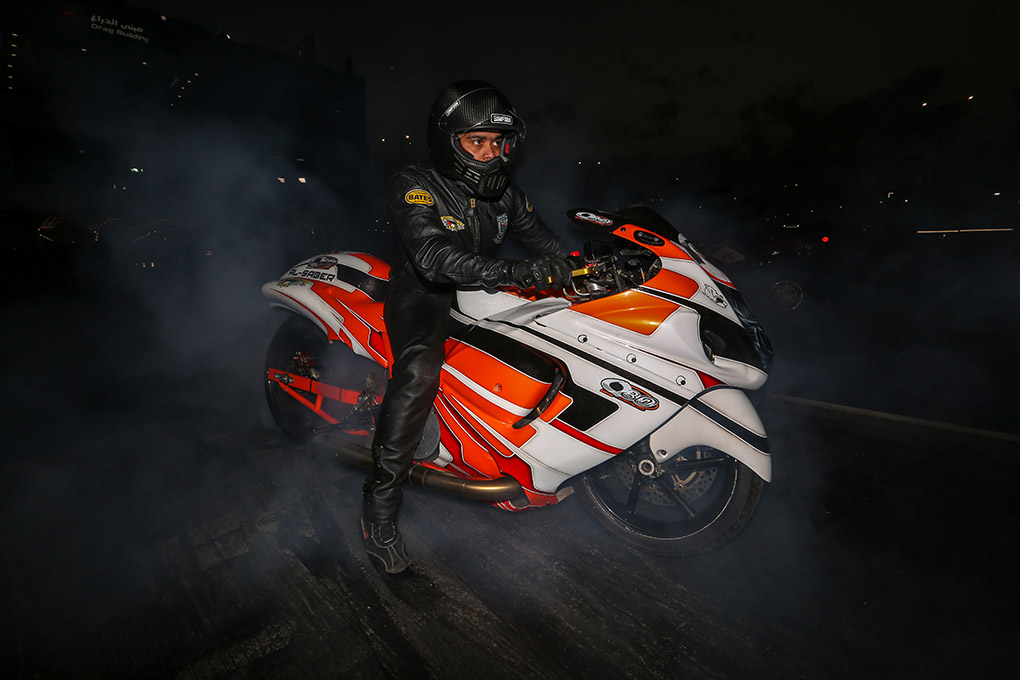 Outlaw 6 Cylinder winner Mohammed Al-Shagag laid down a 5.71 at 168.99 for the final in his turbo Mustang, but could have taken it easier. Runner-up Mohammed Al-Agber (number one qualifier with a 4.75 at 259) timed out in his wounded turbo-nitrous Toyota Supra and never left the starting line, and in fact, didn’t make a full-on pass all day as he admitted his motor needed some major repair.

Mohammed Al-Buloshi did a proper burnout in his “Fear the Beard” white Mustang, but then eased slowly away from the starting line in the 8.0 Index Car final on the full quarter mile. Ali Maddouh buzzed away in his bumblebee black and yellow Mustang for the win in the left lane. Number one qualifier Adnan Hussain broke out and lost to Maddouh in E2.

Ditto for the 9.0 Index Car runner-up, who also drove a white ‘Stang. Khaled Al-Qloushi pulled away from the tree like a grandma while the super sweet Chevy II of Sulaiman Al-Eraier hiked the wheels and rumbled to a 9.42 at 187 kph win. Number one qualifier Mohammed Ibrahim lost to Al-Qloushi in the first round

Also somewhat anticlimactically, Naser Borbaa goosed the throttle too soon, red lighting and cutting gas on his Hayabusa in the 9.0 Index Bike final. Number one qualifier Abdullah Al-Ansari streaked away in the other lane, but didn’t need to test the output of his all-motor, ported, stroked, and with-a-cam ‘Busa to collect the win. He eased the throttle when he saw his win light on and began waving to the crowd—something American grudge star Keith Dennis might do. 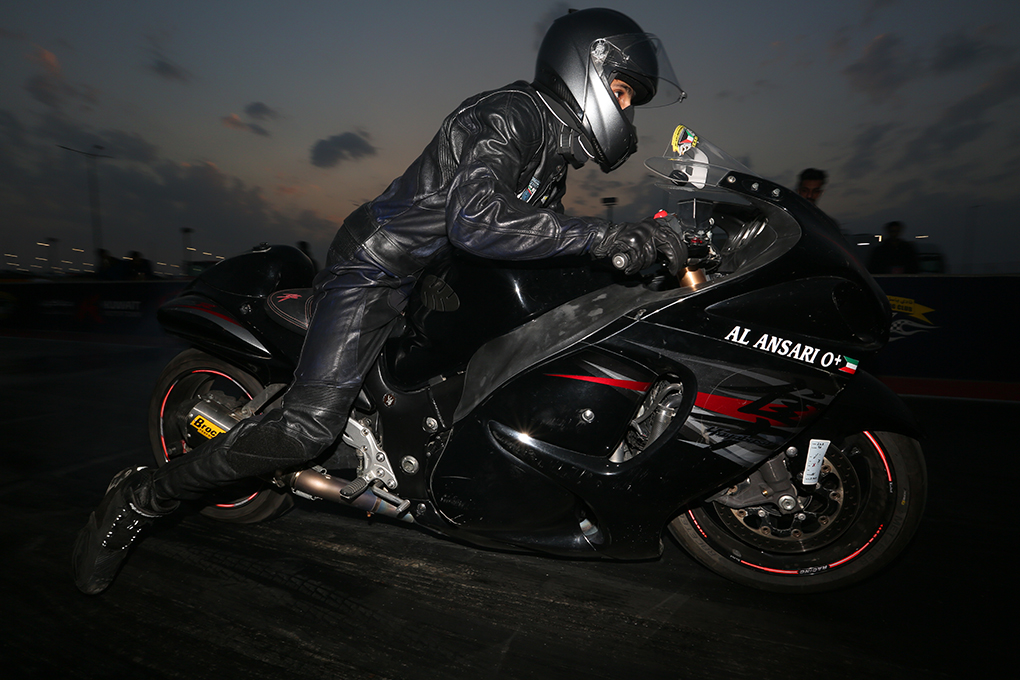 By this time it was past 2:00 am and the starter button had literally broken on the last pair. Winners circle photos turned into wild celebrations of joy, pride, and even relief.

Veteran track manager Scott Valetti was hired to take the beautiful facility and make it race ready—a huge job considering that two weeks before the event the track had no trained staff, and with less than a week to go there were no bleachers. These are only two boxes of a mile long list that Valetti checked off as race weekend loomed near.

Kurt Johnson’s Total Venue Concepts crew came in several days before the event to grind the track, lay down some PJ1, and rotate in the rubber. They maintained a screwed tight surface from the first test & tune pass to the last round of competition.

The second drag race at Kuwait Motor Town will be March 19-22, and you can bet that as word gets around about how great the first event was, crowds will be even larger next time around. 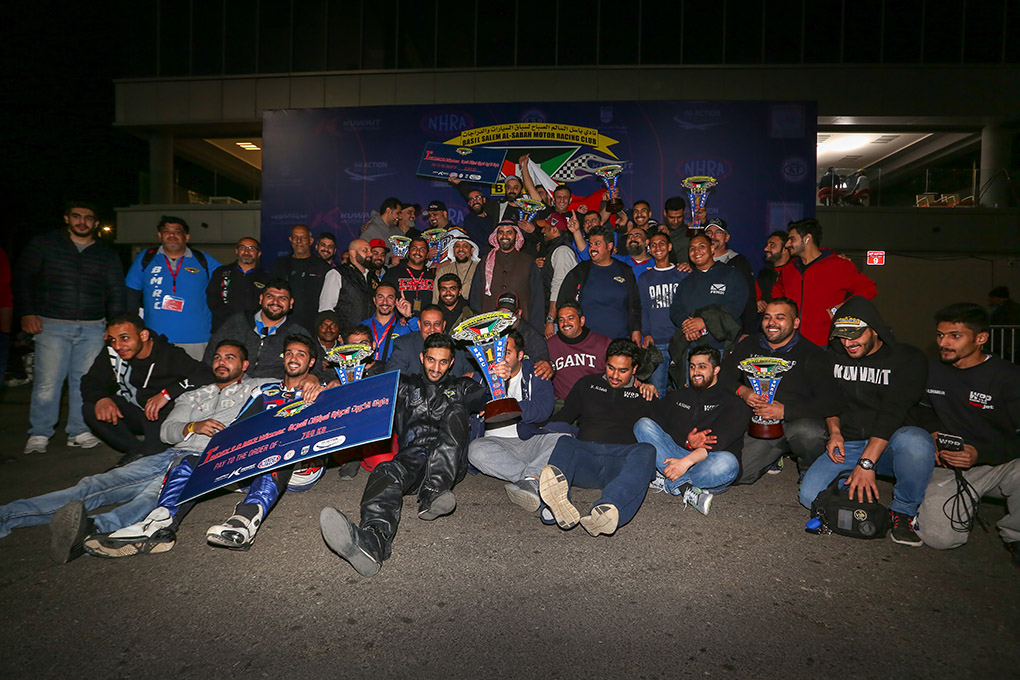 Find out more about Kuwait Motor Town at https://www.kmt.kw