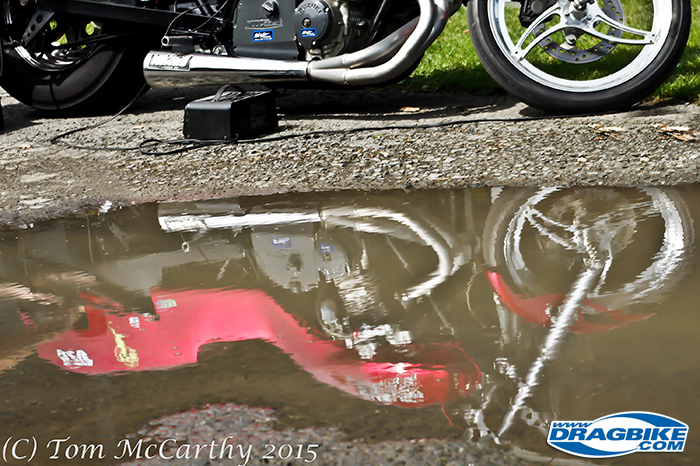 Racing and rain, never let the water get between you and your dreams.

It’s well known, sometime’s welcomed, that into every life a little rain must fall. After all, where would we be without it? A wet drag strip, or the prospect of a weather threatened drag race, presents a whole new subject apart from plant growth or the lack thereof. For this very reason, its important racers understand the consequences and the business side of rain, drag racing and the interrelationship between them. This relationship impacts the very future of the sport.

An important case in point: the 1976 AMDRA racing season. In 1976, the American Motorcycle Drag Racing Association (AMDRA), which was the first “all motorcycle” drag bike racing sanction, suffered one too many rain impacted events that year. At the time, they were struggling for existence with a coast to coast schedule that showcased the best in all-motorcycle drag racing back in the mid 1970’s. Then came 13 rain impacted events during a 26 race season that year. That was all for the AMDRA. They had no choice but to fold at the end of the 1976 season. This was a financial disaster of epic proportions for Roy Strawn, the then director of the AMDRA, who ended the year dealing with bankruptcy proceedings.

Drag racing and rain do not mix well at all. The reasons for this have mostly to do with how and why drag strips and sanctions interact in terms of their business relationships.

When a racing sanction lays out it’s intended racing schedule for a season it must do so a year, or more, in advance of a coming season. In fact in order to secure prime race dates with some tracks, a sanction may have to wait several years to get a specific date at a specific race track. This being indicated, it’s easy to see, a prime race track with a prime date will sometimes require a partial payment in advance, before a scheduled race date. Once a racing facility commits to saving a race date for a sanction, remember, they have forsaken all other income revenue opportunities for that sanction’s request.

What does it cost to rent a drag racing facility? That varies from race track to race track and whatever additional track services are entered into the clauses within a specific contract. Some racing facilities cost $4000 per day, others cost upwards of $10,000 per day, or more, depending on all the aforementioned factors. One popular facility, very popular with motorcycle drag racers the world over, has a current rental price tag of $45,000 for a three day race.

It’s vital that racers do all they can to make a race once a sanction puts the money up to run a sanctioned event. Sponsors have committed their money, vendors have committed to renting vendor space, local law enforcement may have been reserved for crowd control for an event – financial wheels are in motion. This is business on a grand scale as in many grand worth of committed funds.

Racers can turn a cold shoulder to this and say that’s not their problem. But it becomes their problem when a sanction goes belly up and their pride and joy drag bikes no longer have a class to race in.

Once a racing sanction has to start shelling out schillings to the track and to the racers without greater income, the downward spiral has begun. Racers must remember that in the end, a sanction is a business entity. Unless a sanction takes in more income than it puts out, they can’t run in the red for long.

Racers should realize, no sanction expects racers to show up in a deluge with nothing by inches of rain forecast within a 24 to 48 hour period. To some sanction’s credit, the next time a drag race is cancelled before it even happens will not be the first time it’s ever happened due to serious weather pattern looming just before an event.

So how should racers respond to a pending weather challenged event? While racers who are budget minded will understandably not try to spend hundreds of dollars in gasoline by driving to a potential rain plagued race, the least they can do to support the sport is not make things worse. Self imposed weather prognosticators hurt racing sanctions significantly via social media postings.

Once racers start posting on line, in social media circles, “I’m not going there, the weather looks iffy,” then instantly, other racers begin to weigh their options. When racers don’t show for a scheduled sanctioned event, everyone suffers. Often times a rented race track is track is still going to make its money, but the sanction is still going to make only what the racers bring to the table, less rain out returned funds. Know this: the more racers that stay away from a questionable weather forecast race, they are dealing significant financial damage to the racing sanction.

When racers are seeing “the possibility of rain” in a given weather forecast, racers need to think hard about the survivability of a sanction if they want to see a particular sanction stay alive, then do something positive about it. Racers involved in points chases are pretty reliable and committed to a sanction due to a championship points run and they will more often than not show up for a race no matter what. But they are the minority number when looking at what would normally be a 400 to 600 entry bike count. If only 200 plus bikes show up for an event, the sanction is screwed before they even open up the pit gates.

Currently during the 2015 racing season, almost every sanctioned scheduled motorcycle drag race has experienced some level of precipitation. It is vital to the survival of the sanctions that racers to the best they can to support the sanctions.

2020 What is the Most Popular Motorcycle Drag Racing Class?