After spending years at the front of the national Pro Stock Motorcycle class, Ray Easson – who will be in action this Saturday for the WA Drag Nitro Championships event – now searches for different challenges when he goes racing at Perth Motorplex.

Easson was a national record-setter and the 1993 title winner for Pro Stock Motorcycle, crisscrossing the country to chase a championship. It was an exciting but intensive way to go drag racing.

In the early years of Perth Motorplex, he racked up two Competition Bike state titles. Now he is in the far more relaxed Modified Bike class, where personal goals are the priority.

“In the last 15 years I have been racing vintage motocross, as well as still doing some drag racing at Whoop Ass Wednesday street events and the Fast Series. Modified Bike is my next challenge,” he said. 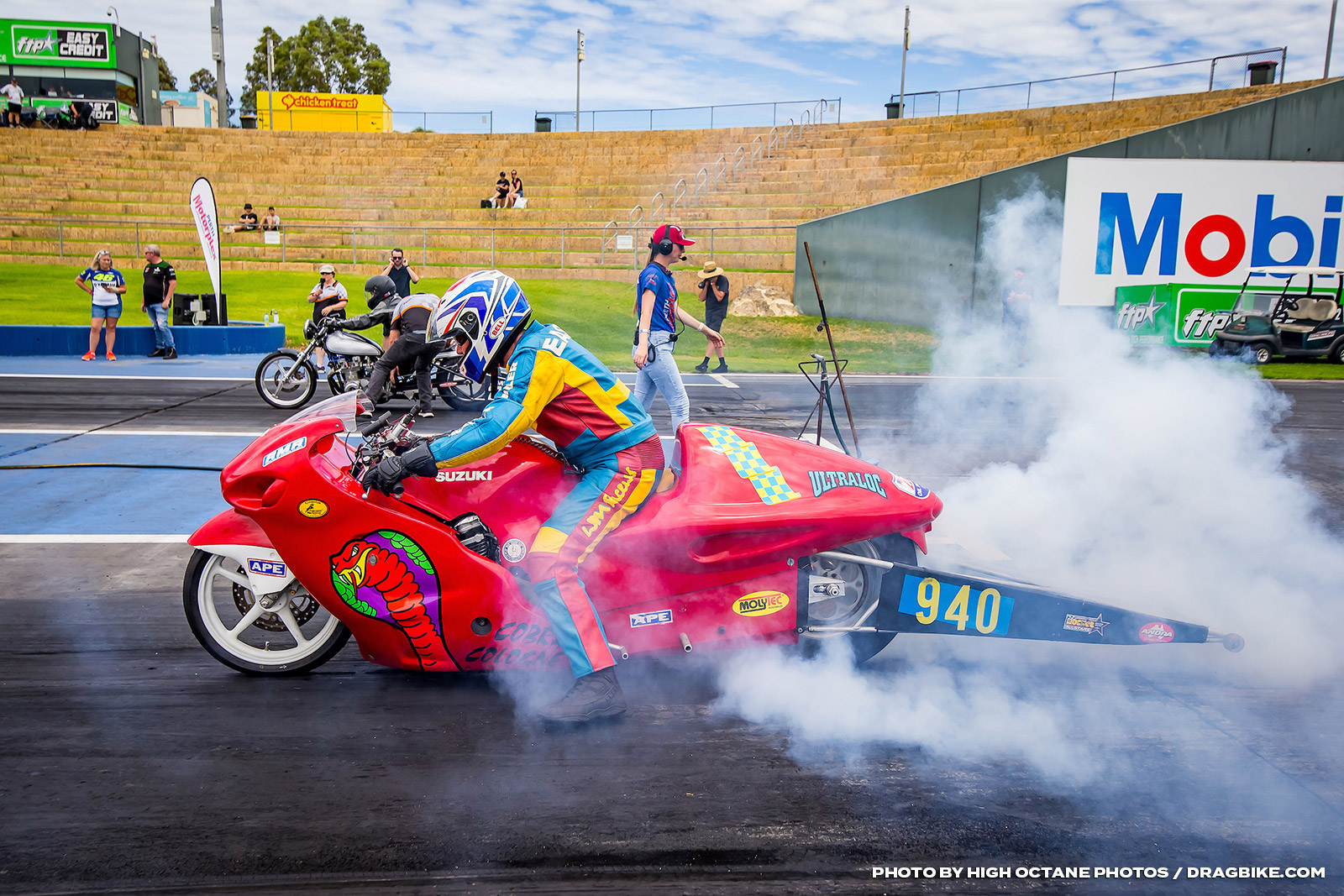 Easson has assembled quite the weapon for the class. The bike has a Pro Stock Motorcycle-style chassis as a base and is equipped with a Suzuki GSX 1570cc motor, making 250hp at 11,000rpm. So far it has run as quick as 7.80sec at 273kmh.

Modified Bike is a class where racers are equalized using self-determined handicaps. Consistency is more valuable than outright speed.

“I didn’t want to do the same things again,” Easson said. “Running Modified Bike with a mid 7sec. bike while the average time for the class is in the 10sec. zone will be a test.

“This will be it for me. Maybe we can go a tenth of a second or two faster with this bike, but I have no other bikes planned.”

The Suzuki is top-tier, but Easson said he needs to match his own skills to the capabilities of the motorcycle. He will get that opportunity at this Saturday’s Western Australian Nitro Championship event.

“My riding definitely needs improving, and I’m hoping it will improve once I start doing more laps. The bike has a new clutch progression stage to try for this meeting. There was also a high speed fuel modification for the carburettors to try, but it didn’t work on the dyno so I have shelved that mod for now. Hopefully I can go fast enough to satisfy my ego, win a round or two and go home happy.”

While it might help to be a former pro champion, Easson said Modified Bike offers some of the best entry level racing he has seen in his career.

“I have raced most forms of motorcycle racing, and Whoop Ass Wednesday street meets and Modified Bike drag racing are the cheapest and easiest forms of bike racing to have a go at. Anyone thinking about it should get out there and give it a shot.”