Richard Gadson is in the process of building a new bike for the drag strip, and it’s not a Hayabusa or a ZX-14; it’s a Yamaha R6. Wait, did you read that right? Yes you did, it’s not a misprint! We asked Richard, why an R6? “I’ve been super interested in setting a new R6 up for drag racing because the old 600 classes are where a lot of good riders have come from, and it was just a fun class to be a part of. I have spoken to a few competitors from the old days, and we talked about the possibilities of what a newer 600 could do, and we all figured 120 hp out of a bone stock engine would be respectable. We struggled to get that much when we were going into the motors back in the day, so set a goal!” said Gadson. 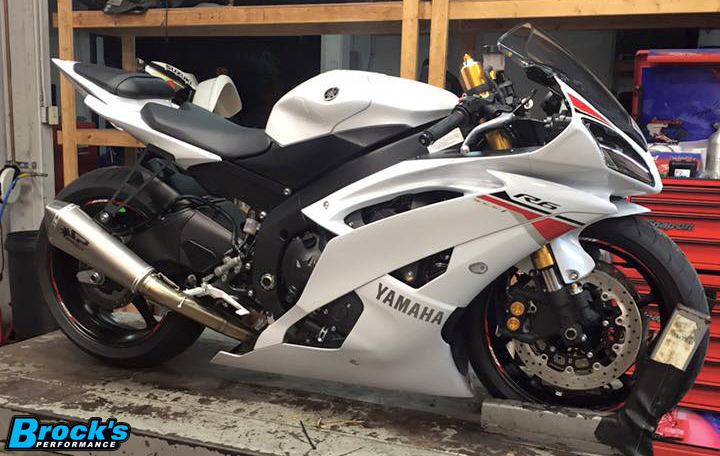 Richard set out with the help of Carrington M. Lloyd, III and Mike Belo to snag a brand new 2015 Yamaha R6 off the show room floor from Greater Motorsports in Florida.

“The first thing I did was put it on the dyno. I didn’t know what to expect, and to be honest, I was somewhat disappointed. It made a lackluster 105.97 hp and 43.37 ft. lbs of torque (Run 5 in the picture). Keep in mind it had 93 octane pump gas and ZERO miles. Does break in matter? I don’t really know,” laughed Richard. “I didn’t see much of a difference as this particular bike got miles, but maybe some people believe in it. Also, keep in mind that Yamaha’s engine program in the R6 has been virtually untouched since 2007. It’s not like this is some new 2015 technology in a motor; it’s actually quite old. I think Kawasaki is the only manufacturer still trying to find horsepower in the 600cc department.” 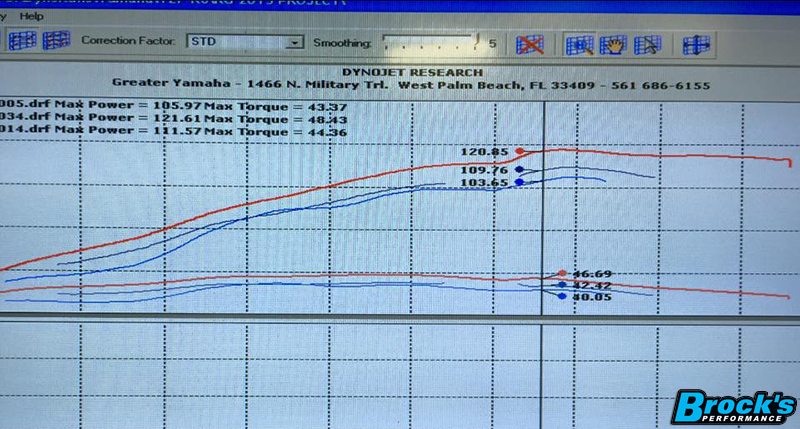 “Once I got into the ECU, I knew why it made no power. Like most of your new production bikes, it was extremely restricted. Why restrict a 600 is what you’re thinking right? Yea, me too! But the mapping was all over the place and this is a throttle by wire bike. Not many people may understand how much of a pain in the ass it is to tune a throttle by wire bike, right Brock Davidson? Well it’s not really rocket science how to fix that or get around it, but I don’t really want to tell the world how to do it. So I’ll just say I had to fix that and a few other restrictions in the ECU to unleash whatever power this 600 would have. But first, I wanted an apples to apples comparison with an exhaust to see the gains it would yield.” 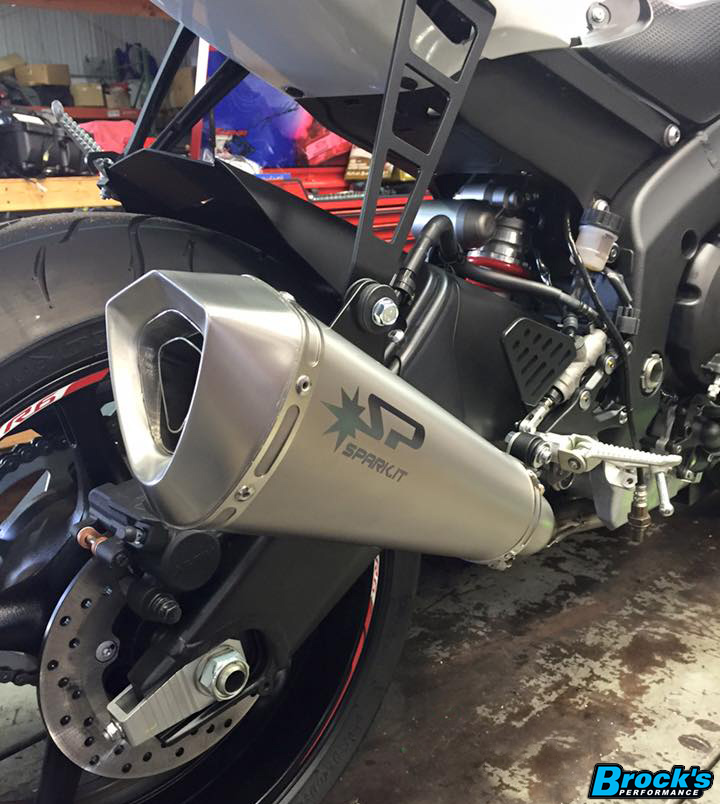 “I didn’t really have to look that hard because my first choice was, and will always be, Brock’s Performance products. But they don’t make an R6 exhaust. However, they now carry a new exhaust line called Spark Exhausts. I must say it’s a really cool exhaust, and I fell in love with it immediately. Once we put it on, I dyno’d it with minimal changes in the ECU. All I really did was extend the rev limiter, which didn’t do anything for power because it falls off so early anyway. And I cleaned up some of the bogus mapping between 8-10,000 rpm. The results were 111.57 hp and 44.36 ft. lbs of torque (Run 14 in the picture). Most of the exhaust companies I researched were making between 4-7 hp gains with a full exhaust, AFTER tuning to the exhaust, so this was pretty on par with everyone else. Still a good ways away from my 120 hp goal, but it still had 93 pump gas in it, as well as minimal tuning and still some restrictions. BUT, now I get to start having my fun!”

“I took the ECU out and went to work! I ‘unleashed’ the power, fixed the throttle by wire issues, messed around with ignition timing (which I still need to do more of), ordered a Bazzaz box to tune it a little better, removed the stock air filter and installed a Sprint Filter air filter from Brock’s Performance, took the stock oil out and replaced it with some Less than Zero weight Alisyn oil and Brock’s Petron additive, got some heavy duty clutch springs from Skip Dowling at Orient Express, and added VP MR12 race fuel. Of course I lowered it and changed the gearing and chain as well to get ready for the drag strip. I’m not sure what gearing to use yet until I ride it, but I took a good guess at it.”

“That reached my goal of 120 hp and certainly produces enough hp to go some decent numbers. You have to gear the heck out of a 600 to make it run, and it makes them a handful off the starting line. Back in the day, we had a bunch of weight on the front end to help, but I’m not going to put weight on this brand new bike, which is actually still for sale here at Greater Motorsports.”

Now off to the track for some real world testing. While dyno results give a peak into how your motorcycle will perform, track testing is crucial to really see where you are at.

“So we headed out to Orlando Speed World to get some seat time. Unfortunately we only got one pass in on this bike, but it was enough to know we are going to have some fun on this bike. The bike has a lot of potential, which is apparent in the 140 mph number (see time slip). That would’ve been an exceptional mph back in the original days of 600 Super Sport (SS), especially considering this is a stock motor! The guess I had made on the gearing was a little off; it was a wheelie monster, and I couldn’t leave aggressively. However with a gearing change, I should be able to run 9.70’s my next time out to the track, so stay tuned!” 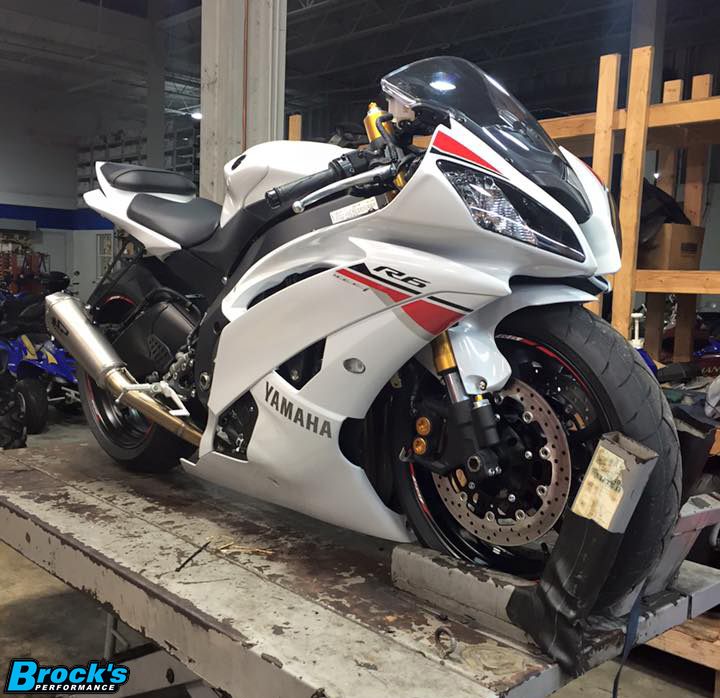 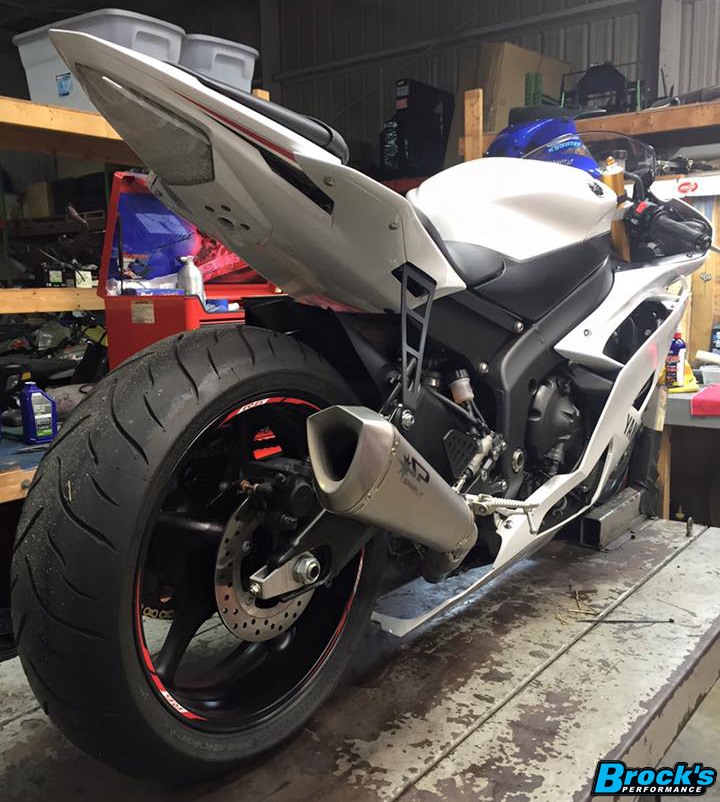 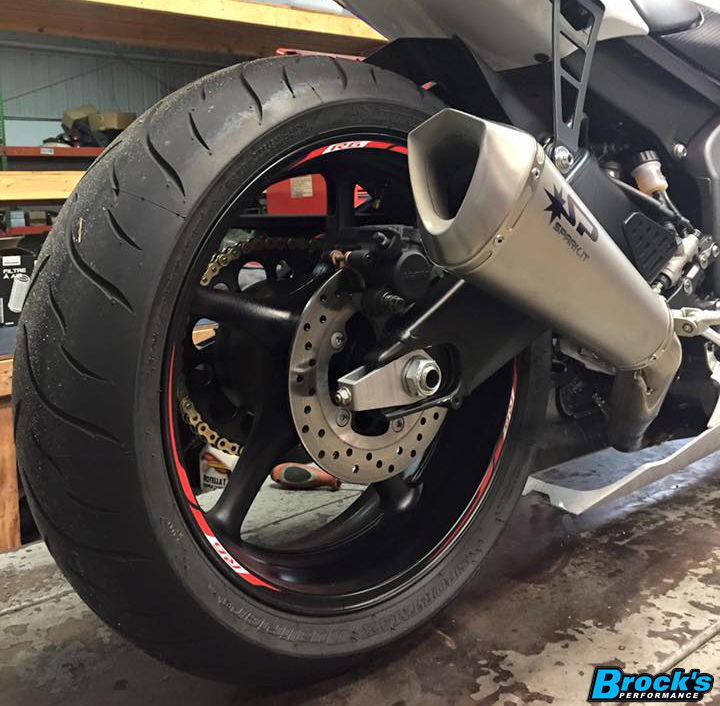