Words and pictures Ivan Sansom and Rose Hughes
Thanks to TSI Timers (Europe) for access to the timing data
Cool conditions and a sticky Santa Pod track combined to provide the scene for a FIM-Europe season opener that saw some very quick times, a slew of personal bests and one of the strangest finals in European drag bike history. 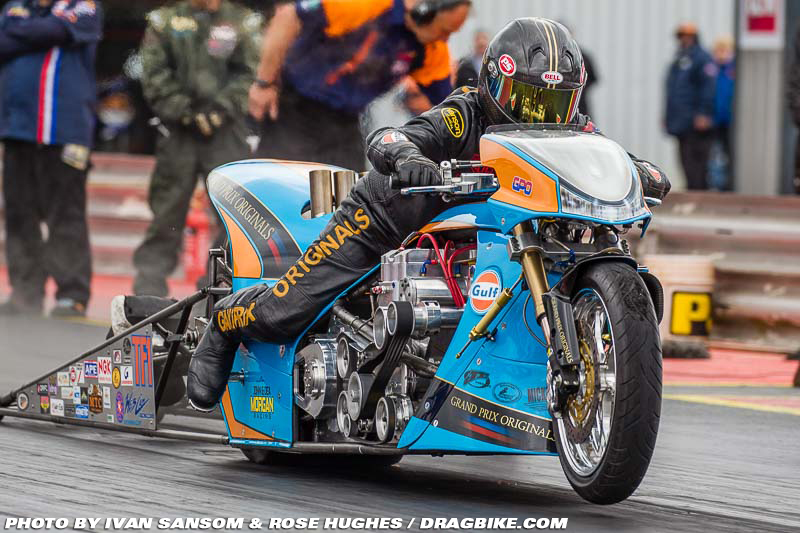 FIM-E Top Fuel Bike attracted eight entries, with multi-time series champion Ian King qualifying in the number one spot and the quickest run of the event with a 5.8305/232.52mph run (the Gulf Oil bike having propelled King to a 237.32mph clocking on an earlier 6.0103). Rikard Gustafsson produced a similarly world class number of 6.3880/215.85 from his Suzuki Funnybike to qualifying in second spot, with Steve Woollatt (6.6025/197.97) and Filippos Papafilippou (6.6322/203.48) rounding out the top half of the field. The first round of eliminations saw King take a solo, breaking traction, stripping the rear sprocket and shedding the chain on an eight second clocking, with Gustafsson (6.5666/210.87 over Otto Knebl’s 7.8897), Papafilippou (6.7472/202.55 when Rene van den Berg was a no show) and Nick Milburn (the FIM-E rookie on a solo when Woollatt experienced fuel system problems before completing the burnout) making up the semi-final quartet. 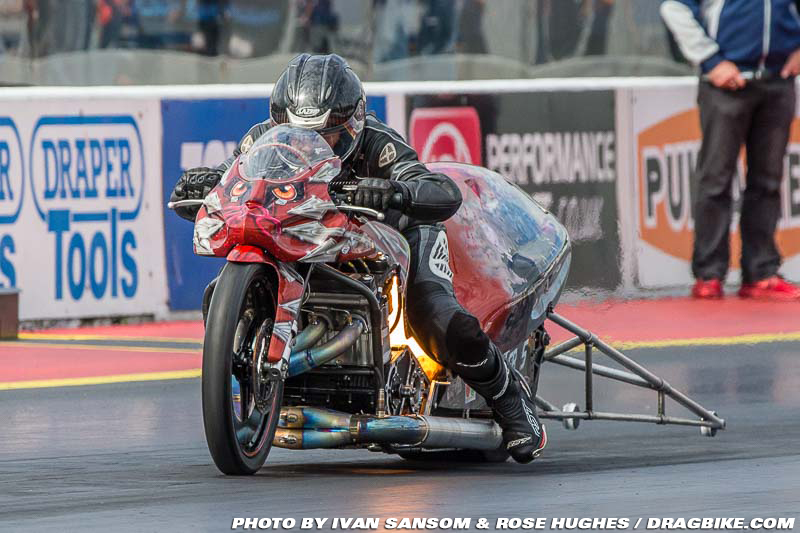 Milburn was an unfortunate no-show handing Gustafsson a competition bye which the Swede took with a 6.6593/201.51. On the other side of the ladder, King was stricken with traction woes again handing victory to Papafilippou’s 6.7596/199.00 by the best part of two seconds. With the final a Swede v Greek affair, Gustafsson taking the win in bizarre fashion when Papafilippou coming to a halt after brief nitrous fire shortly after leaving the startline, with Gustafsson seemingly stranded but frantically seeking to engage the transmission and ended up idling to a 21 second clocking from his Suzuki Funnybike passing Fil with a friendly ‘wave’ on the way. 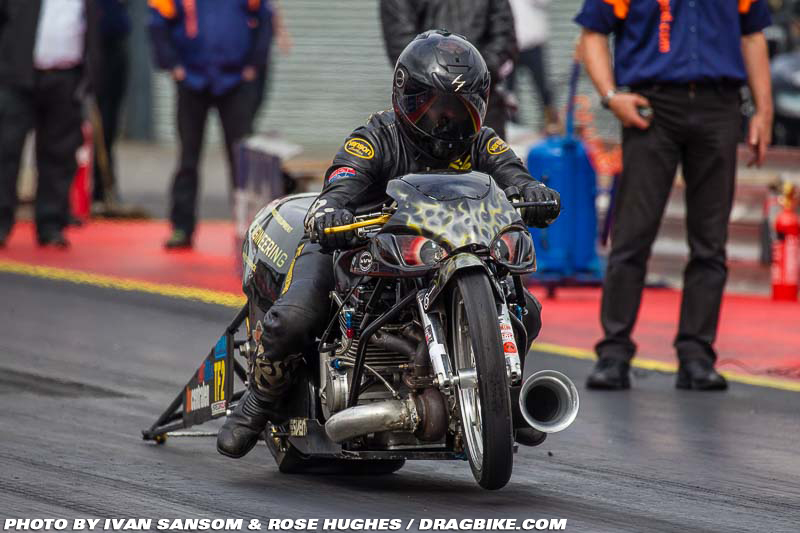 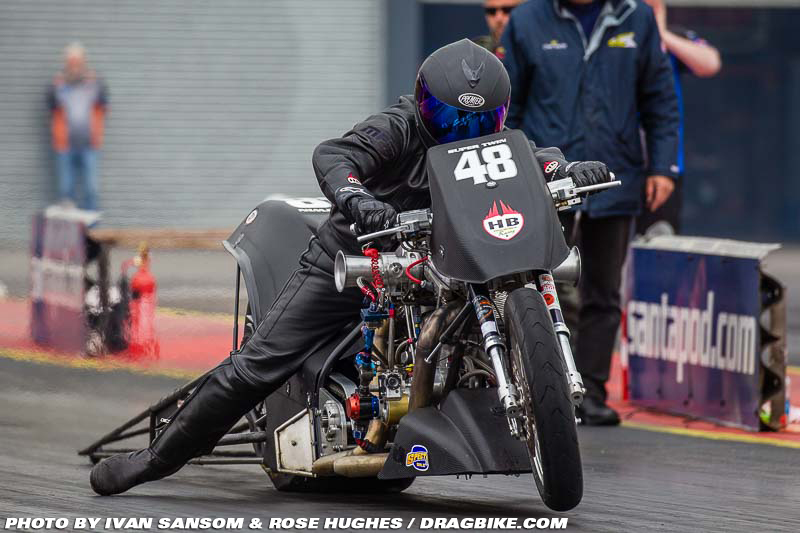 Qualifying in FIM-E Super Twin depleted the field with Czech Roman Sixta destroying his nitro V-Twin on his first competition outing with a new Stateside-sourced entry. The remaining three competitors had mixed fortunes with the Ton & Vincent Pels’ Zodiac entry scuffing the pistons twice during qualifying ensuring a thrash for the Pels and rider Ronny Aasen to make raceday, when it happened again resulting in a first round exit. Job Heezen (victor over Aasen) was also struggling with the fuel setup having made many changes over the winter and was mired in the seven second zone throughout qualifying and indeed eliminations. 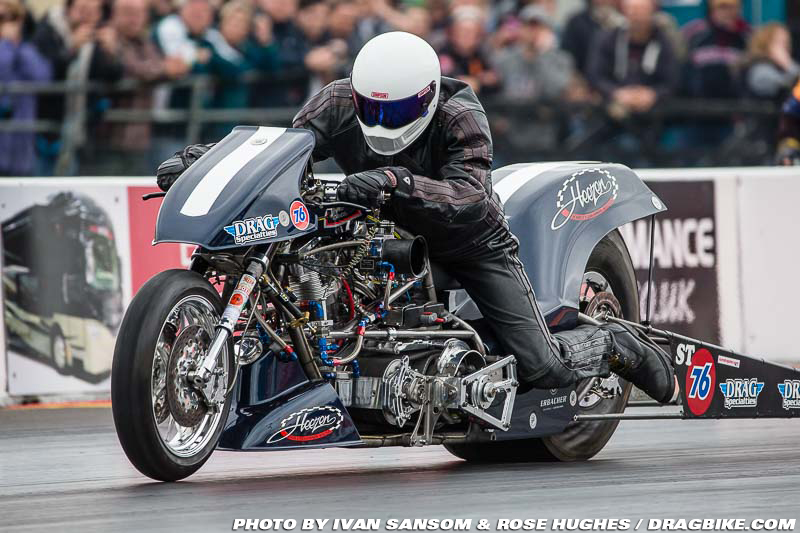 Low qualifier (with a 6.7358/208.04) and eventual winner Martijn de Haas seemed to have a much calmer event, defeating fellow Dutchman Heezen with a 6.6056/212.81mph to a 7.3536/205.24mph decision, although he had a bit of a scare when his helmet visor flew off at close to 200mph at the finishline in qualifying leading to a somewhat erratic braking episode. 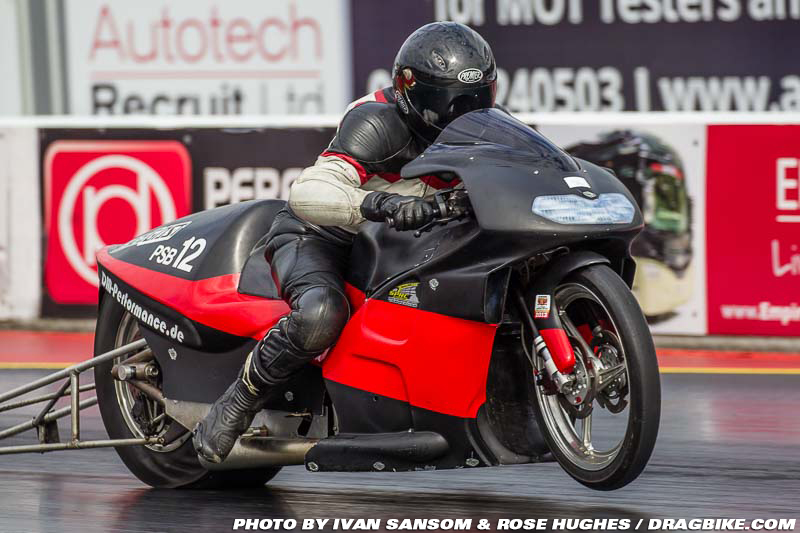 A bumper eleven riders took aim at the eight spots in the FIM-E Pro Stock Bike elimination day field, although breakages prevented Gert-Jan Laseur (the Dutch Buell rider had the high of setting a new PB elapsed time mark with a 7.1465/180.64 to gain third spot on the ladder, followed by the low of destroying the V-Twin motor on the next pass) and Allan Davies (also in PB territory with a 7.6259 to take the eighth spot) from making raceday. 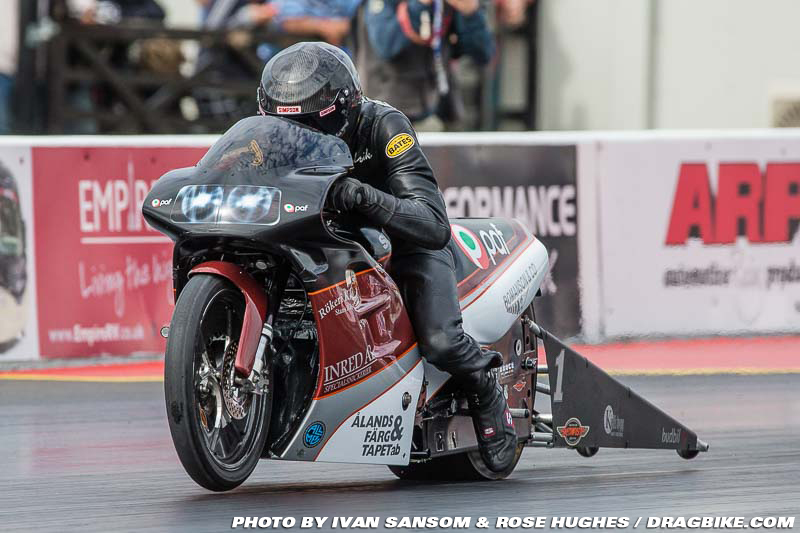 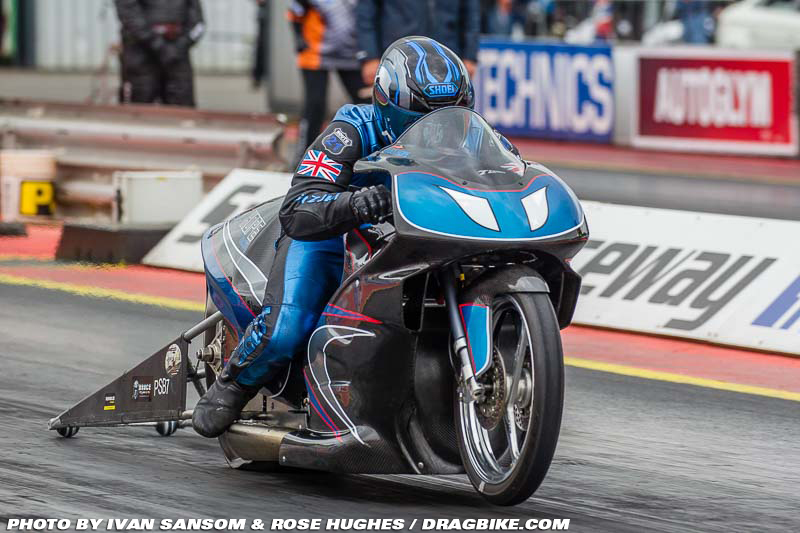 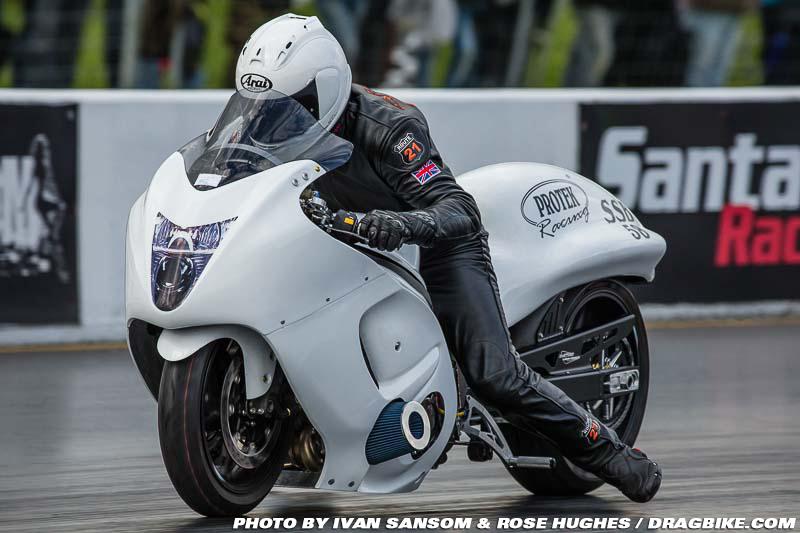 The no bar FIM-E Super Street Bike Cup collective produced some spectacular numbers, with the class ET mark repeatedly reset with Dave Holland initially taking it down to a 7.0686/205.19 to qualify on top of the heap. ‘Dutch’ lowered the mark further in the opening round of eliminations with a 7.0387/207.90, but the black and orange Busa was gone in the quarter-final stage, losing out to Danny Cockerill. 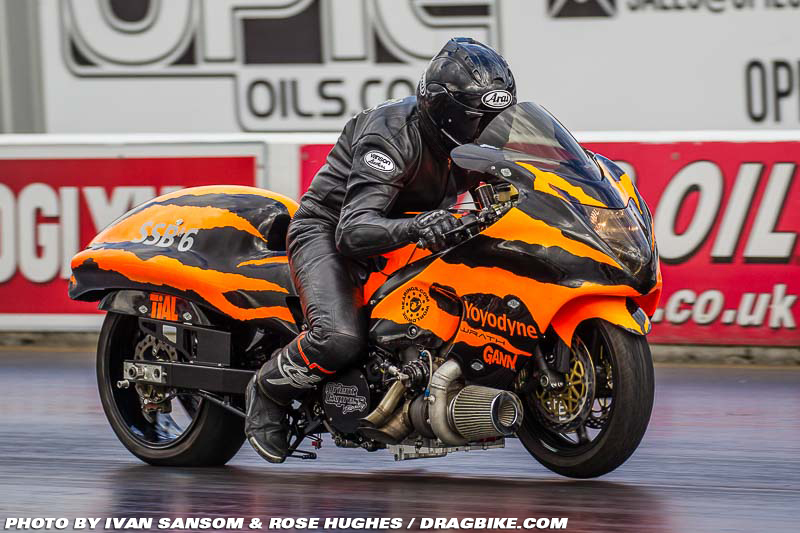 The final would pit 2014 Cup holder Steve Venables against a returning Rick Stubbins and in what could be considered an upset, the Protek Racing rider took the win when Venables pulled a huge red light (perhaps wary of the 7.1138/201.46 PB that Stubbins put up in the semifinals to defeat Cockerill). 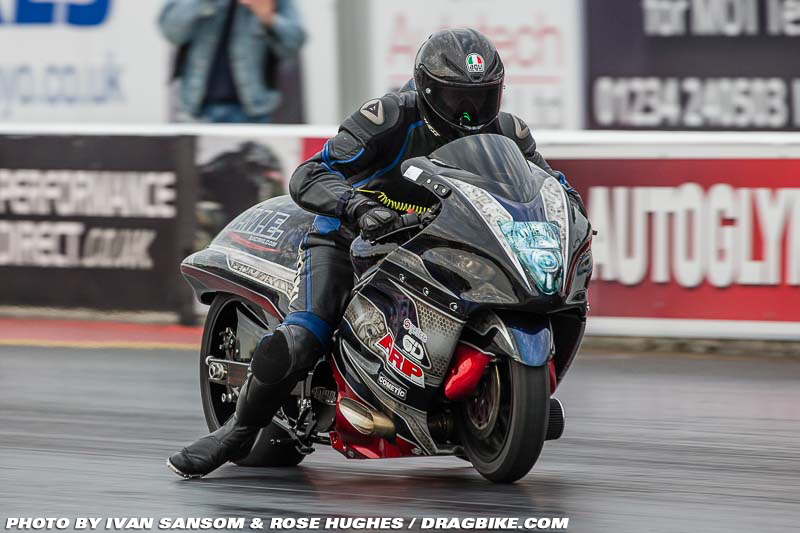