The stars of the NHRA’s Top Fuel Harley motorcycle series including newly-crowned champion and U.S. Nationals winner Ryan Peery of Milford, Ohio, and former multiple-time series champs Jay Turner of Julian and Tii Tharpe of Pfafftown are among those who will duel this week for the Ray Price Trophy at the 30th AMRA Jim McClure Memorial Nitro World Finals at Rockingham Dragway. 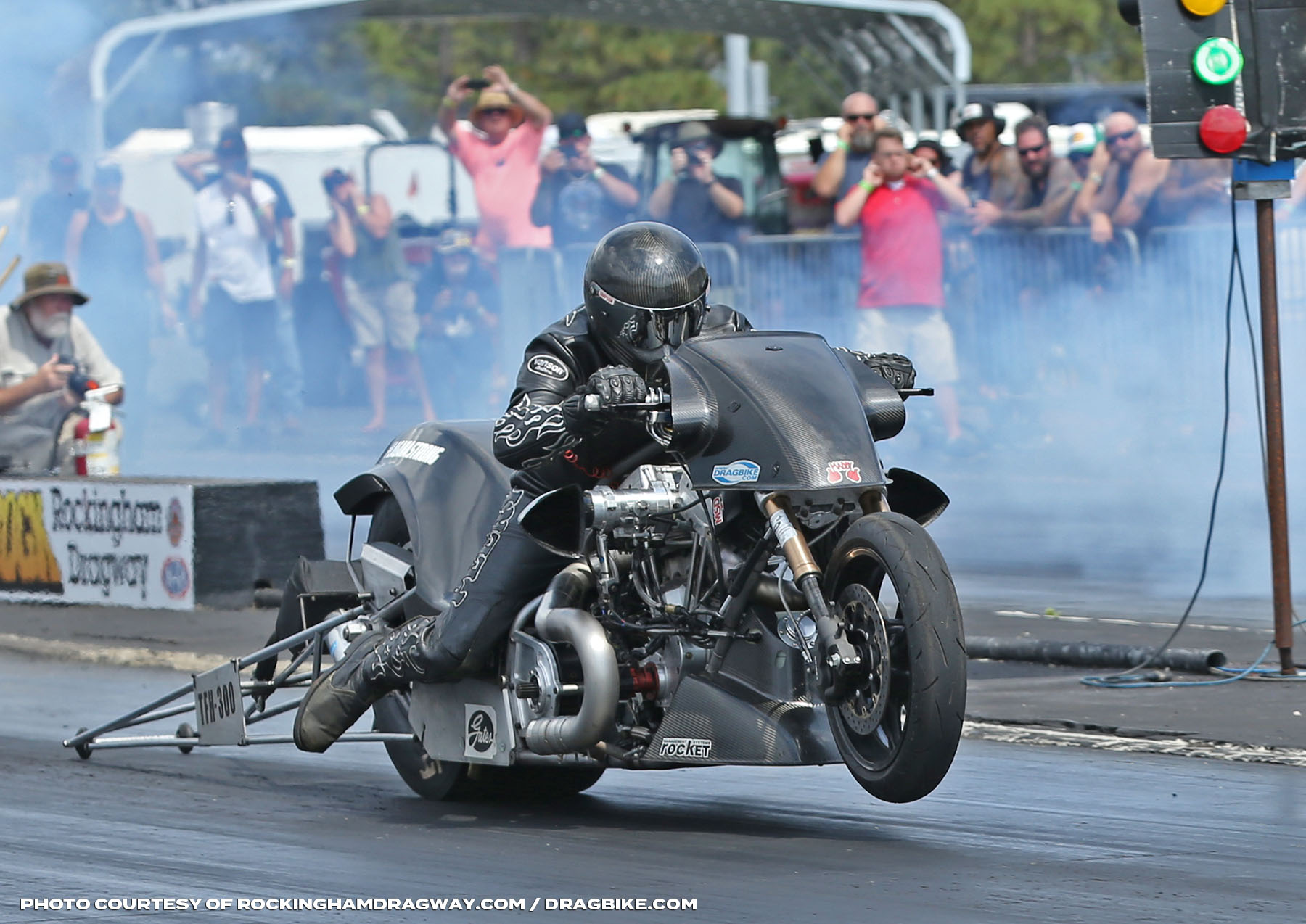 Peery, who this year dominated through qualifying and the first two rounds in June at the AHDRA Summer Nationals, has been virtually unbeatable this season and will be trying to complete a Top Fuel sweep at The Rock.

It won’t be an easy task for the AMRA speed record holder (231.70 mph), though, because the field also is expected to include 2020 NHRA Top Fuel champion Randal Andras of Amelia, La., Ashville’s Tracy Kile, Texan Rickey House, 2020 AHDRA series champ Rich Vreeland of Bloomsburg, Pa., Frank Capone of Wakefield, Mass., and Walnut Cove’s Tyler Wilson, who applied an exclamation point to his rookie Top Fuel season by earning runner-up honors to Peery at the NHRA U.S. Nationals at Indianapolis.

That’s an awful lot of Top Fuel firepower and that alone may place in jeopardy the eight-year-old Top Fuel Harley quarter mile record of 6.197 seconds set at The Rock by Tommy Grimes astride the late Ray Price’s bike.

The other nitro categories boast equally formidable lineups. In Nitro Funny Bike, last year’s finalists are back and battling one another for the series title. Nashville’s Chris Smith and Tokyo, Japan’s Tadashi Saito are 1-2 in points, the same way they finished last year in the McClure race. They’ll be challenged by James Hoffman of Edwardsburg, Mich., Jordan Peterson of Titonka, Iowa, Winston-Salem’s Jay Beasley and perhaps even Pro Fuel standout Sam White of Chapin, S.C.
The 2018 McClure winner, White will be among the favorites in a Pro Fuel category that also features point leader Jim Martin of Palatine, Ill., former Rockingham winner Rocky Jackson of Arnaudville, La., and defending champion Preston Bartlett of Palatka, Fla.

Also expected back is Andie Rawlings of Lakeland, Fla., who last fall made history when he won Dial-In Eliminator at The McClure on an electric Harley.

The track will be open Thursday for early parking before a test-and-tune session from 12 noon until 6 p.m. Saturday’s pro qualifying begins at 10 a.m. and single elimination finals kick off at 11 a.m. Sunday. Discounted tickets are available for two days ($35), three days ($45) or four days ($55). Single day adult admission is $20 with children under six free with a ticketed adult.