Savoie Number 1 on Friday at zMAX

Savoie Number 1 on Friday at zMAX

Pro Stock Motorcycle champion Jerry Savoie and the White Alligator Racing (WAR) team unloaded hot at the NHRA Four-Wide Nationals at Concord, North Carolina’s zMAX Dragway, then stayed that way through the end of the day to hold the provisional number one qualifier. Savoie will have two more rounds to defend his number one spot before the unique Four-Wide eliminations begin on Sunday. 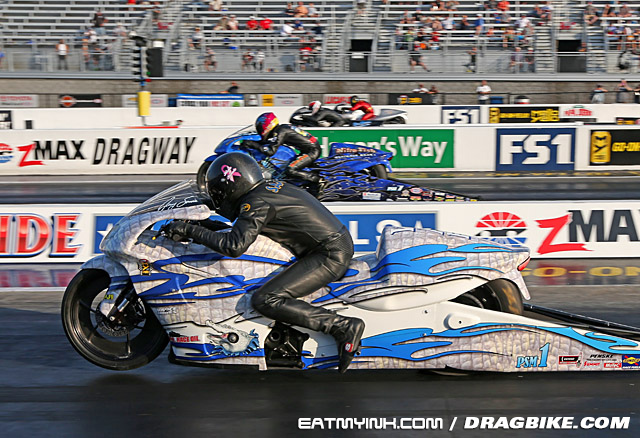 Savoie’s Suzuki TL1000 body is brand new this weekend, and even though it’s a duplicate of his championship winning body, it fits slightly different. “Tim (WAR tuner Tim Kulungian) told me before we got here that, because this body hadn’t been in the wind tunnel, we might not run so well this weekend.” Thankfully for Savoie and the team, Kulungian was just being cautious.

“The other body might have been a little faster, who knows. But hats off to Tim and the crew. I’m just a rider. I’m sure there’s someone else that could do just as well if they had my bike and this team. Those guys are great and they get the credit.”

Savoie’s teammate LE Tonglet sat third after Q1 with a 6.894 on his Nitrofish Suzuki and, despite improving slightly to a 6.880, fell to sixth in Q2. “We’ve been having a problem with the bike blowing through the clutch on LE’s bike,” said Savoie. “They’re supposed to be identical bikes, but there are differences. We’ll get it figured out.”

Savoie, who qualified number one at the PSM opener in Gainesville, is excited to be starting out the season with class-leading performance. “If you look back over the years since Tim and started working together, we’ve always started out slow.”

Whether it was switching to fuel injection or the switch in fuel brands made by the NHRA, the WAR team has always started previous season on the back foot. Now with a championship trophy in hand and a fast bike out of the box, the rest of the PSM field had better watch out as the WAR team has started 2017 moving forward and punching.

For more information about Jerry Savoie and White Alligator Racing go to http://www.whitealligatorracing.com/

Find out more about the NHRA at http://www.nhra.com/