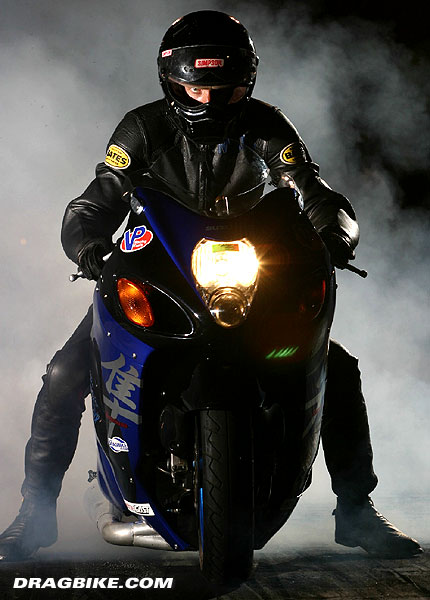 After a long day hot day of qualifying in the tough 60 Inch Pro Sportbike class, all a racer wants to do is check out the ladder sheet for Sunday and down a couple of cold ones. This season however more than one racer has swallowed a bit too hard on his brew, coughing and choking when he looked at his first-round opponent. Many were heard to exclaim,…”Say it ain’t Slowe!” 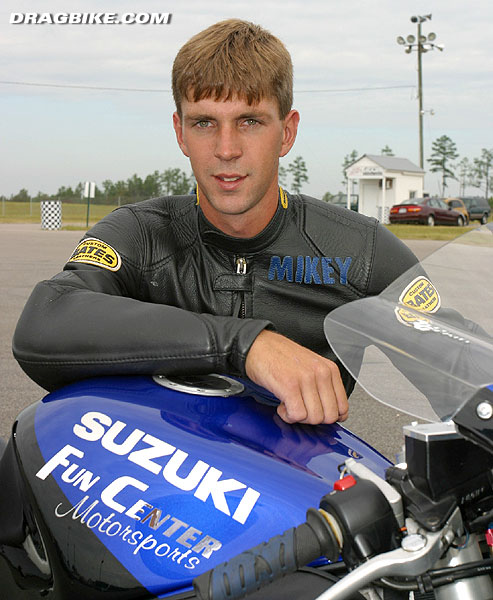 When the now-infamous name of Mike Slowe appears in the ladder sheet next to yours, all thoughts of a leisurely night of bench racing goes right out of your head. These thoughts are replaced by thoughts of how you can squeeze a few more hundredths out of the bike or just how far you can push the light to get an advantage. But for the most part those thoughts are just that…thoughts. It seems no matter how many horses you unleash or how big a jump you try to get off the line you are still looking at the back end of the quickest and fastest 60 Inch Pro Sportbike rider in the world. 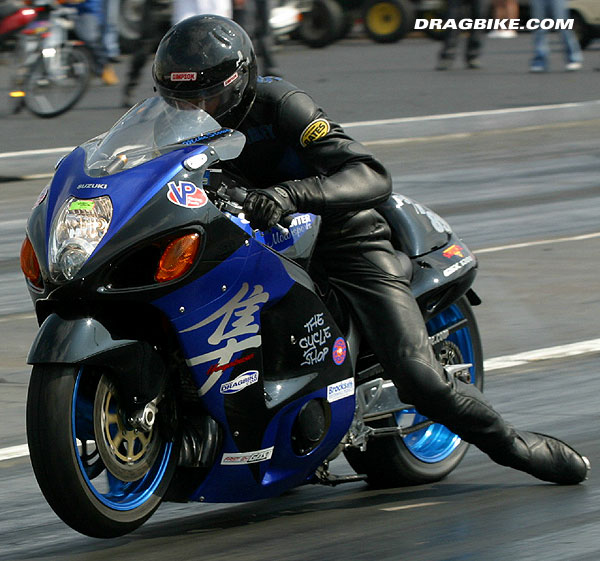 Mike Slowe, a native of Bensalem, Pennsylvania has made a real name for himself in the MIR/Rock Series competing against some of the finest 60-inch riders in the world. Names like Johnny Locklear, Rickey Gadson, Doug Witt, Lee Shierts, and Butch Thompson are littered all over the qualifying sheets at these events but the win light more often than not shines brightly in the Slowe lane. But it hasn’t always been this way for the lanky Slowe. In fact the 25-year-old started the season with a bent valve that forced him to pack up and leave the first race before eliminations began. Since then he has come back with a vengeance. He now holds both ends of the 60 Inch Pro Sportbike record and is one round away from clinching the MIR/Rock Series championship for 2003. 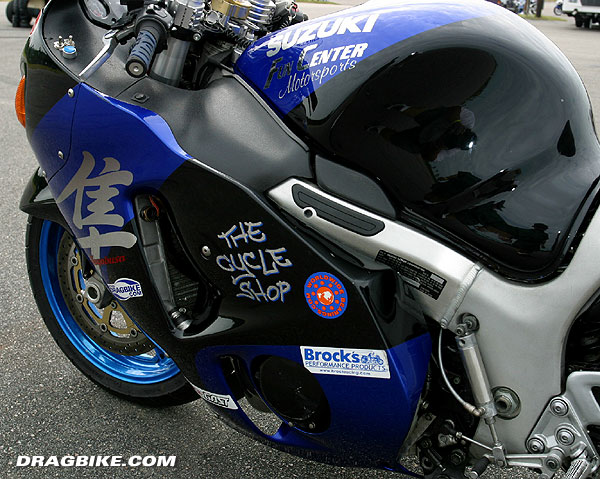 The question you get most often at the track is: where did Slowe come from? Actually, he has only been riding motorcycles for the past five years and racing locally for four seasons. ” I got my start on a GSXR 600 that I bracket raced locally”, said Slowe. “Then I met Carl Stieffenhofer of the Cycle Shop at a street event and again at Atco. We got to talking and my Hayabusa began to take form.” Slowe got the bike together in time to make a couple of races late in 2002 with little success. “I think at one race we qualified last, but that was all we did last year. Since then I was able to get some help from some great guys and we have turned our program around.” The help mentioned has come from Stieffenhofer and teammates Gary Kramer and Paul Watkins. “We all work well together and it has shown on the track.” Indeed it has. The Team Slowe machine now has two wins and a runner-up (all at MIR) as well as qualifying number one at five events (2-MIR, 3-Rock). He is also the national record holder in the class after running a head-turning 8.20 at 181.84 MPH at the last Rock event. 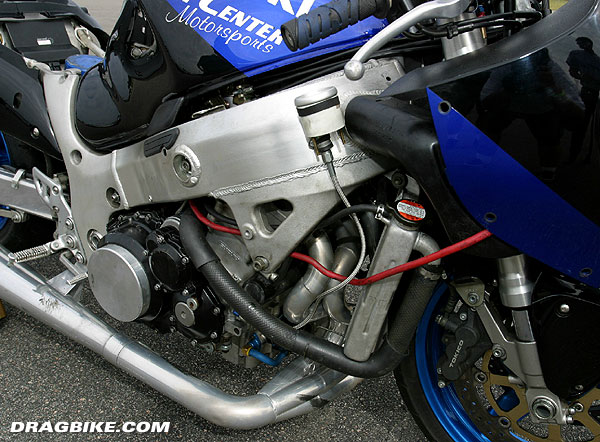 However for all his success Slowe has paid the price. He tests weekly, sometimes more than once. Unfortunately his last test run almost ended his season. ” I was making a pass at Atco when a rod broke just below the wristpin. I was on the top end of the track, got into some of my own oil and the next thing I saw was the Armco barrier coming up at me. It was then I decided it was time to get off.” That “get off” resulted in a broken knuckle on his pinky, some bruising and some serious road rash on his shoulder. “The shoulder has been the worst part of the crash, said Slowe, it’s been three weeks and you can still see the muscle and bone. I have been using a cream that eliminates the dead skin in the area and this week they will be changing my medication to help promote the healing process. If all goes well there will be no need for any skin grafts.” 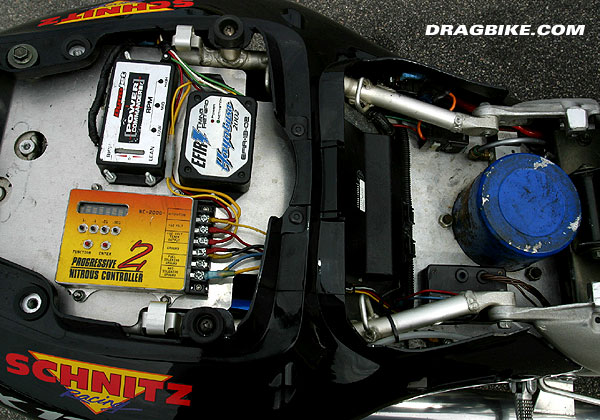 While all the bodily healing has been taking place, the rebuild of the motorcycle has been going on as well. Gary Kramer and Paul Watkins as well as Carl Stieffenhofer have been burning the midnight oil in order to prepare the bike for the last Rock event on November 22 and 23. “We borrowed Anthony Navarro’s motor which is identical to mine and we are fixing all the little things that were injured in the crash. We hope to have the bike ready to ride this weekend and Anthony will make a couple of passes on it until I am ready to run. I will make some runs on my street bike this weekend, probably at Englishtown, to get myself acclimated to riding again after the crash. I can still see those metal barriers coming up at me!”

As long as all goes well, all Slowe needs to do is qualify and win one round in Rockingham and he will lock up his championship. “It has been an interesting season for the team and a win in Rockingham would make it all worthwhile.” While he has been working hard to get ready for the end of this season, Slowe has also been making plans for next season. “I have a deal to ride the 60″ class next year on a turbocharged Hayabusa prepped by Barry Henson. Henson’s Velocity Racing out of Florida will sponsor the bike. I’m not sure yet what I will do with my current bike but I am leaning towards making the changes it needs to fit into the AMA/Prostar Streetbike Shootout class. We have some time to make that decision but for now I am concentrating on getting well and winning the MIR/Rock Series championship.”

Slowe is very grateful to all the people who have come to his aid since the mishap and wants everyone to know just how much he appreciates their help and concern. He especially appreciates his sponsors: the Cycle Shop, World Wide Bearings, Fun Center Motorsports, Baxley Wheel Chocks, Schnitz Racing, Fast by Gast and Dragbike.com. He would also like to thank Nicole McCarron, Veronica and Gil Slowe, Carl Stieffenhofer, Gary Kramer, Paul Watkins and Anthony Navarro for all their help and support.