The Southeastern Drag Bike Association, brought to you by Rob Bush Motorsports/190Hookup.com, hosted the Hard Times Parts and Service / Kathy Acuff Memorial Race on July 18th, 2020 at Knoxville Dragway in Knoxville, TN. Even with temps of up to 98 degrees and track temps up to 140 degrees, the show went off without a hitch. Nearly 150 motorcycles came into the furnace of July heat to try their hands at the SDBA guaranteed payouts.

The 865 Racing 32-bike Shootout on Friday night was down to four bikes and it was John Markham, Wes Brown and both of Dustin Lee’s double-entered bikes when the DRR Team decided to split amongst teammates. 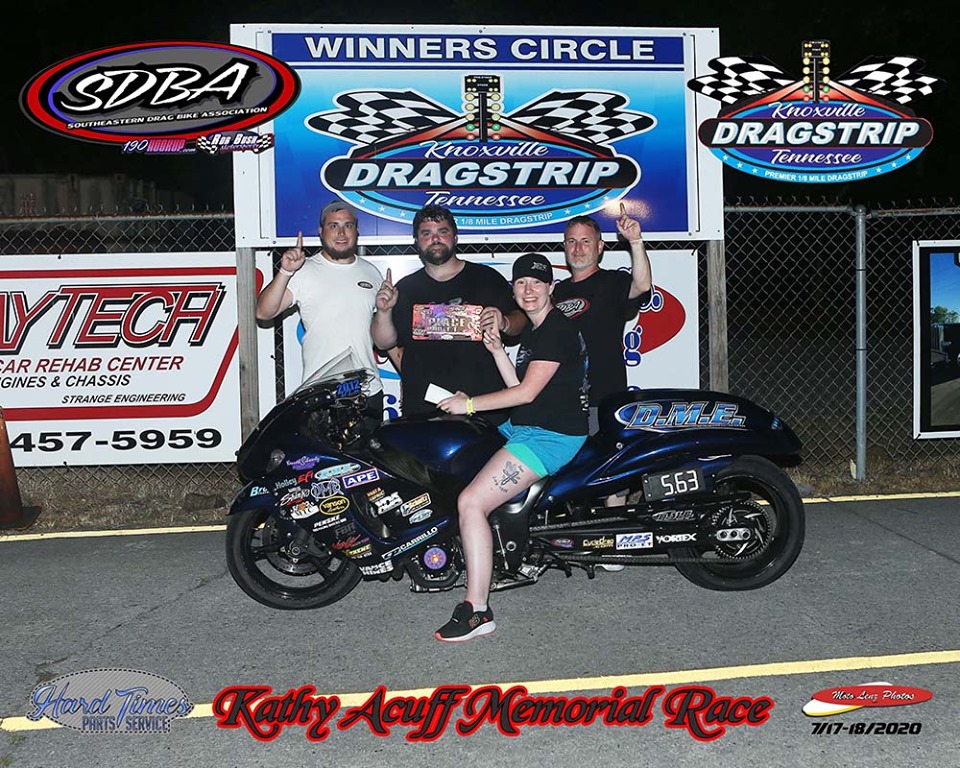 Liguori Drag Racing Super Comp – In the semis John Markham defeated Shaun Bizette from Louisiana as Spencer Claycomb “the Amish Outlaw” defeated Dustin Lee and in the finals Claycomb prevailed for the win on his street bike with a .003 r/t over the bar bike of John Markham with his .013 r/t. 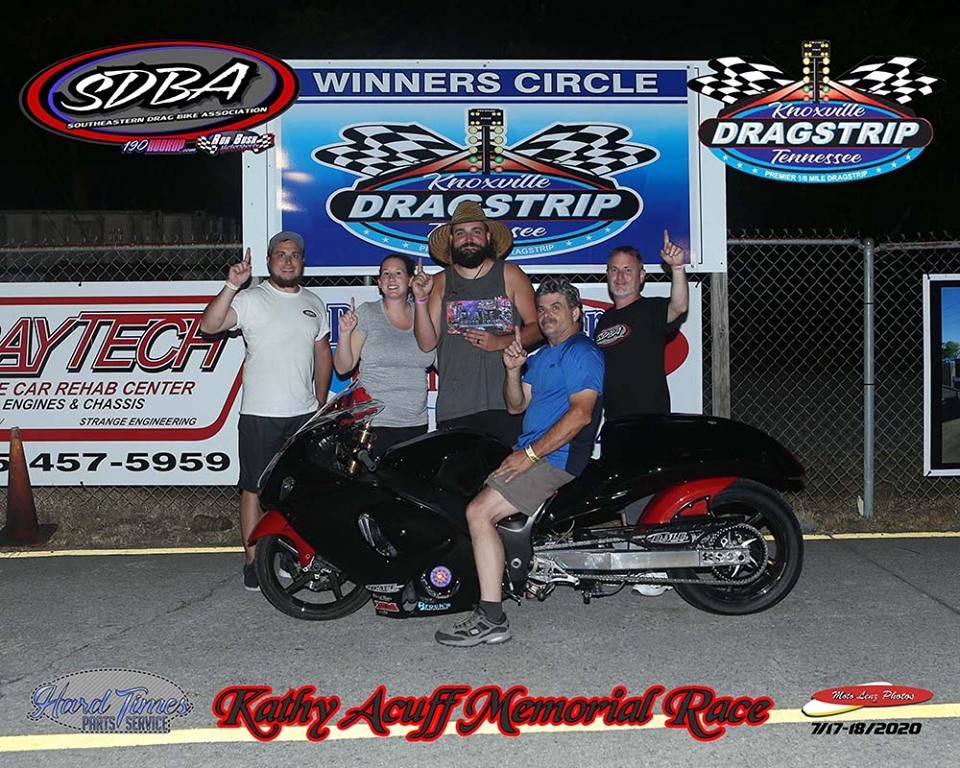 HTP Performance Super Stock – It was Patrick Cooper vs Brandon Pryor in the finals. Patrick had his competitor covered based on previous rounds and decided to go conservative on the tree. Brandon, with little to lose took a stab at the light – that’s right, a guess on the .400 pro tree.. and he nailed it with a .010 light for a .211 holeshot and it worked for the win. Brandon ran a 6.054 to Patrick’s 5.884 overcoming the 17 number difference and a margin of win of .041.

865 Racing 6.0 – In the semi’s, Pablo Gonzalez picked up a win over Casey Hunt with a .010 light while Duane Jackson had the bye. Pablo took the win over Duane in the final in a super close final. 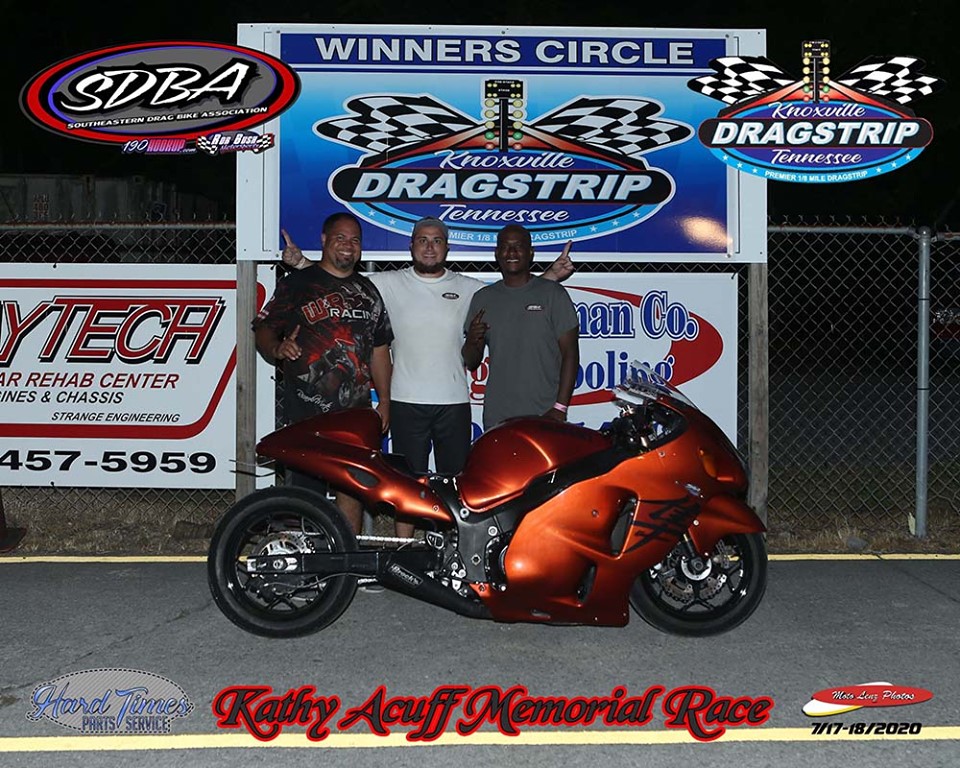 MPS Pro ET – In the semi-finals it was a double red light as Jerry Tuner fouled before Dustin Lee’s .001 red. Don Richter appeared to be on the brakes harder than John Markham by .001 in their double breakout super close match. Dustin Lee (with Hard Times Parts and Service and was the race sponsor) went on to defeat Don Richter in the final.

Brock’s Performance Street ET – It was a barn burner in the finals between Wes Brown and Dustin Lee with a margin of victory in the triple digits. Both riders had double-0 lights and double breakouts as they went through the 1/8th mile side by side and with a little more than a tire width of difference at the finish line, Wes Brown was closest to his dial for the victory. 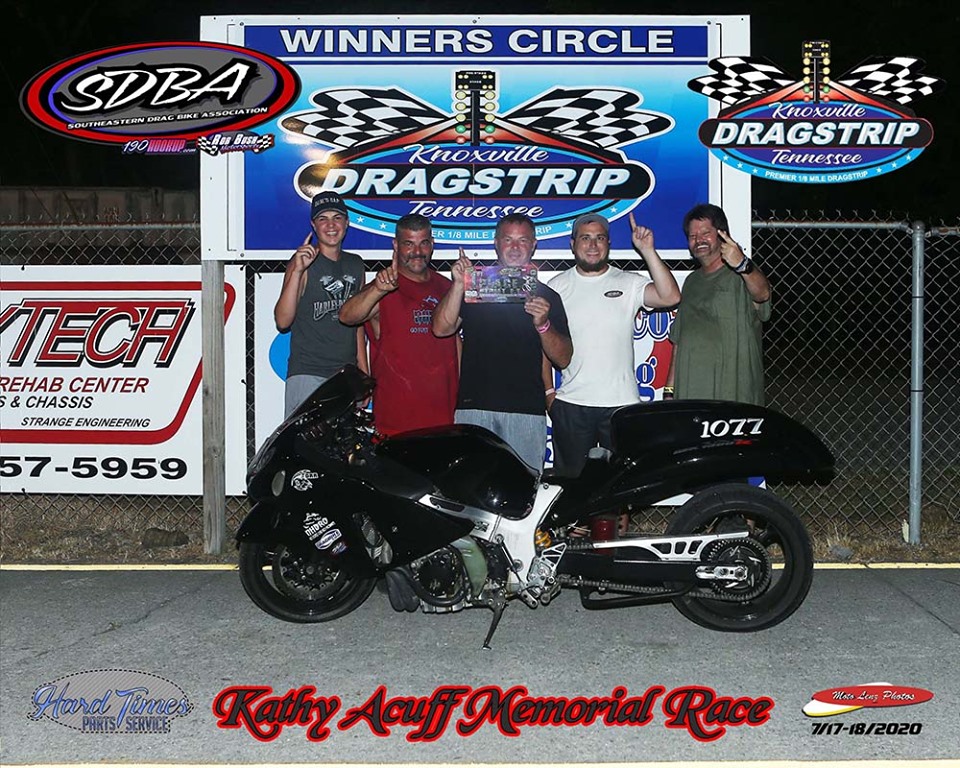 WhatAGraphic! Jr Dragsters – Hanna Turner takes her win over Luka Markham with a closer reaction time and closer to her dial. All the junior dragster kids had a fun event! 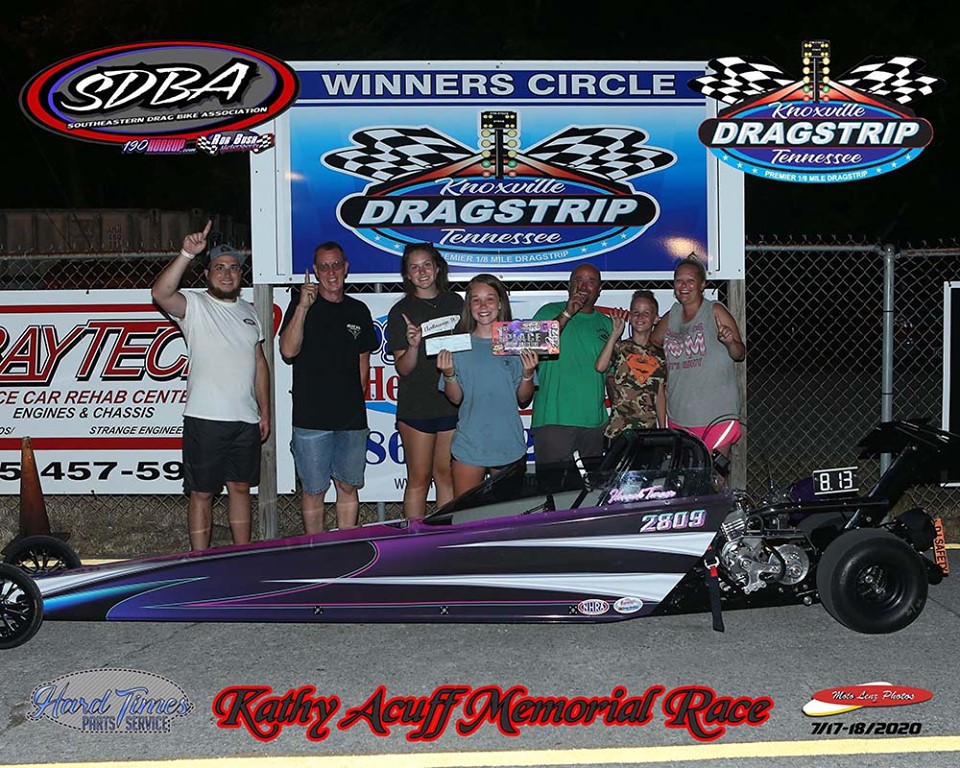 SDBA V-Twin – In the semi-finals, Crosby Blair defeated Steve Clark as Steve went red, and Casey Smith had the bye into the finals. Casey Smith took the win as Crosby snagged a red light. 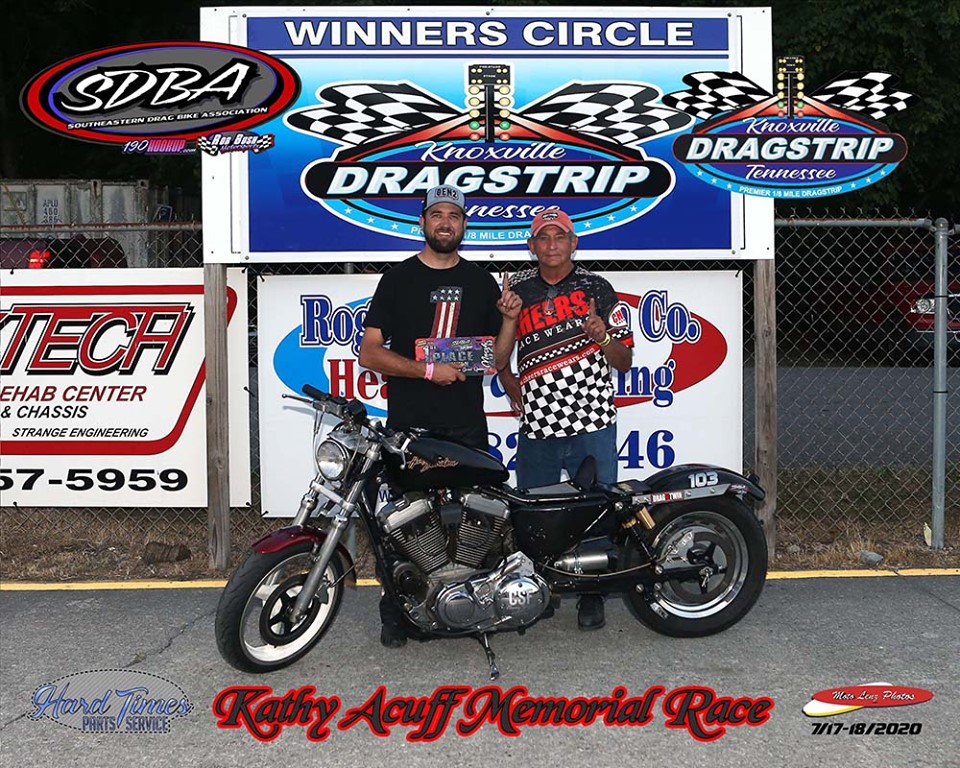 We cannot thank our racers enough for all your support and understanding on another outstanding event weekend! Be on the lookout for photos from Michael Davis and videos from Jack Korpela III. Michael brought his trailer/printer/graphic studio from Ohio to capture the event, so be sure to buy some photos! Our media support came for this race was brought to you by Dave Schnitz with Schnitz Racing and Carlo Testa with Testa Racing Engines.

The race this weekend was brought to you by Dustin Lee with Hard Times Parts and Service.

The 2020 SDBA series is brought to you by Rob Bush with Rob Bush Motorsports and 190Hookup.com. 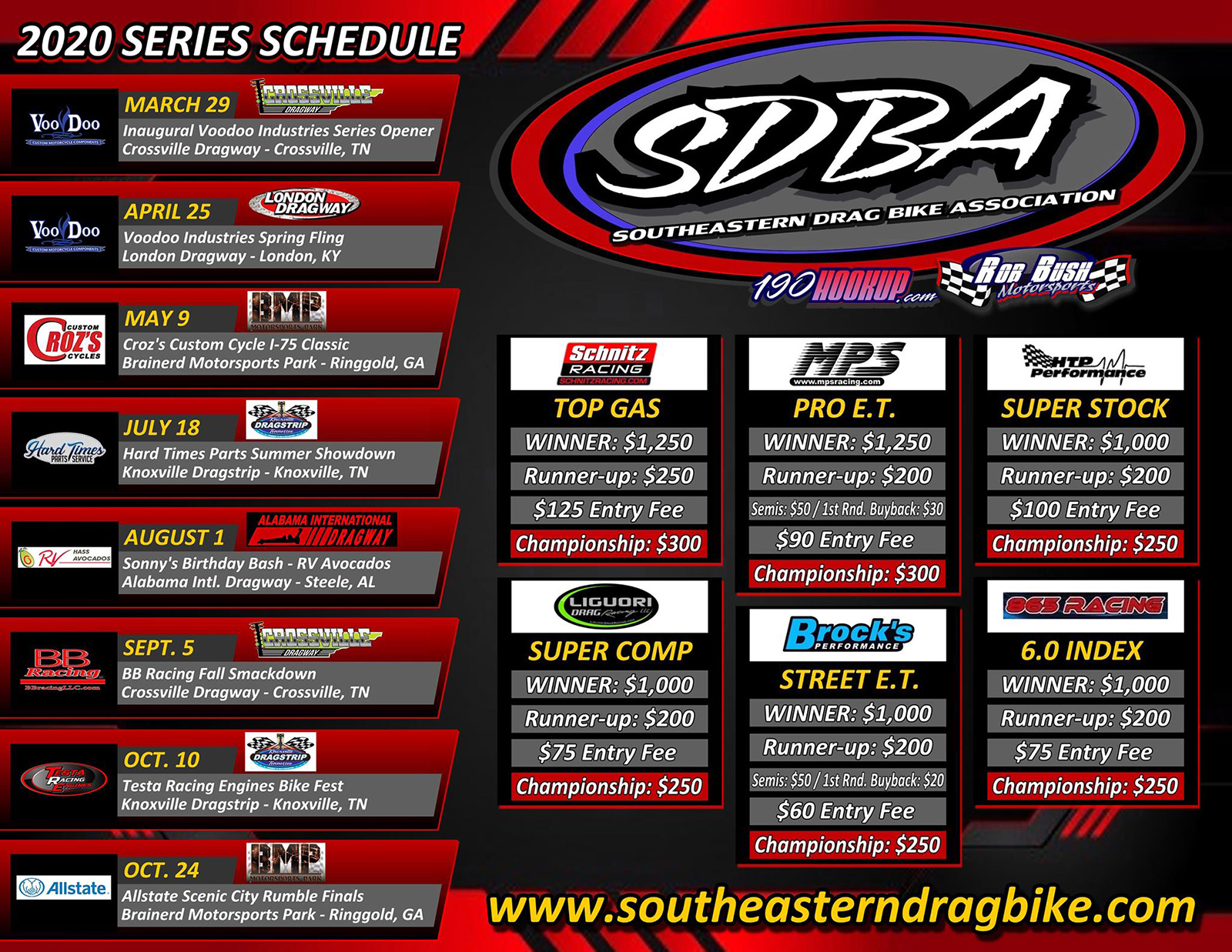 SDBA only permits 2-wheel motorcycles to enter an event. Three or Four-wheel vehicles are prohibited from entering a class at SDBA.  For more information on class rules, click here.