It’s difficult to imagine a more sweltering dragstrip than Louisville’s Ohio Valley Dragway in July, although Montgomery Motorsports Park comes to mind. Ohio Valley is literally a long ball throw from the mighty Ohio River as it carves its way between the Kentucky bottomland where the track lies and the forested Indiana hills on the far bank. The Salt River runs just behind the tower and it’s tributary is parallel to the track, meaning the complex is bordered on three sides by water. Crayfish leave mud towers around their holes alongside Ohio Valley’s wall-to-wall concrete eighth mile. You get the picture—it’s sweat-dripping swampy.

And when the fire-breathing bikes of the Midwest’s largest all-motorcycle drag racing series—NHDRO—hit the track for the CC Powersports Mid Season Sizzle on July 5-7, it was sizzlin’ for sure.

Or smokin’ if you’re Pro Ultra 4.60 “Smokin’ Joe” Rodney and his trusty blue Kawasaki. Rodney raced Louisville’s own Keith Nichols in a Kentucky Home Track vs. Tennessee’s Fast Time Motorsports final round after a long day of racing in a big field. Rodney took the tree .016 to .028 and ran a 4.62 to Nichols’ 4.64 to claim the win for Tennessee. 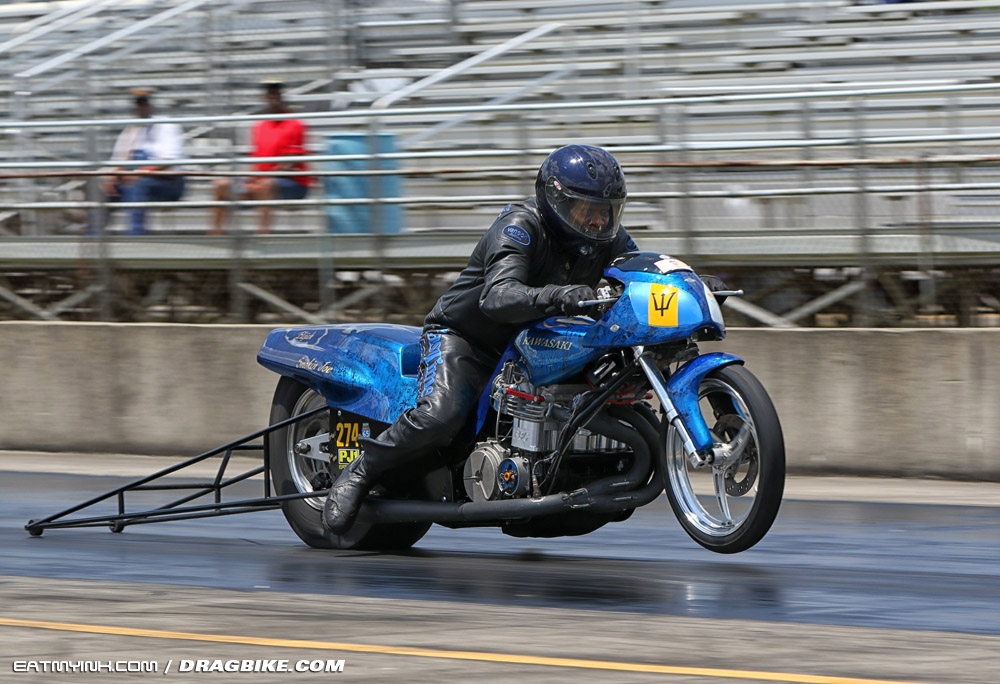 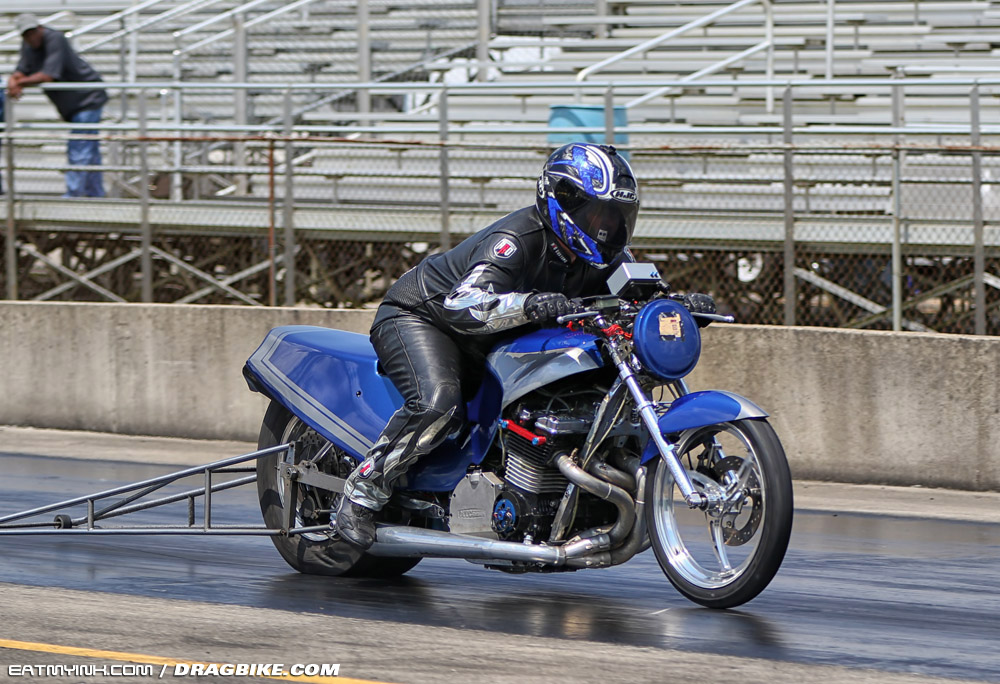 Just a tick slower (5.10 index on the eighth mile) but every bit as packed and exciting was Hardcore Cycles Top Gas. Joe “Big” Deck finished the day with the win when Kevin Hill’s bike took the tree out of gear. Hill had a great day up until then on his throwback SEMDRA dragbike.

“What an awesome weekend,” said Deck, who then joked “I’m just glad it wasn’t too hot out. 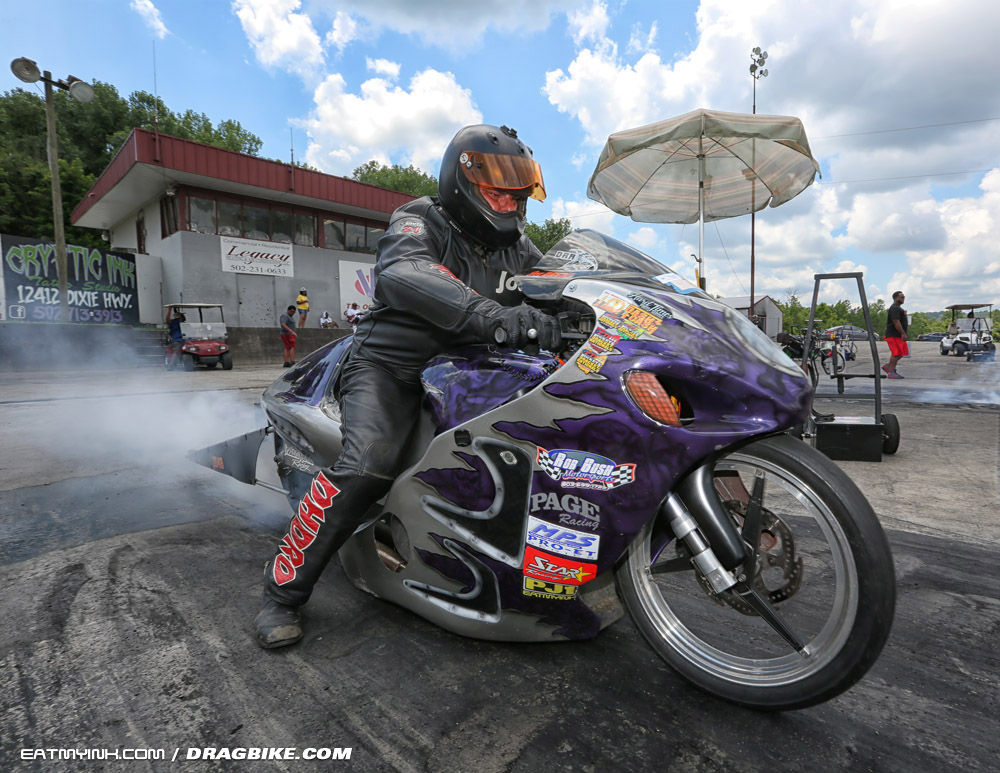 “I was lucky to make it through such a tough field. Thanks to Page Racing for the badass power plant, and thanks to Brett Stoner, Heath McQuinn, and Donnie Emerson for all the help. Congrats to my DRR teammates and thanks to Tim Hailey for the great coverage.”

Kudos to Maegan “Bikerchicc” Bowers, who went to the semis on her no-bar ‘Busa. Many no-bar Top Gas bikes stayed away from the eighth mile at Ohio Valley, fearing the wheeliebar bikes’ advantage, but not Maegan!

Louisville racer Mika Wheeler qualified number one in Top Gas but lost to Jeffersonville’s David Thompson in round two.

Iowa racer Joe Klemme took the tree (.024 to .066) from John “Spooky” Markham in the M2.Shocks Crazy Comp final and rode that advantage to the win in the 5.65 index class, with a 5.67 to Markham’s 5.66. Number one qualifier Dustin Lee lost to Klemme in the quarterfinals. 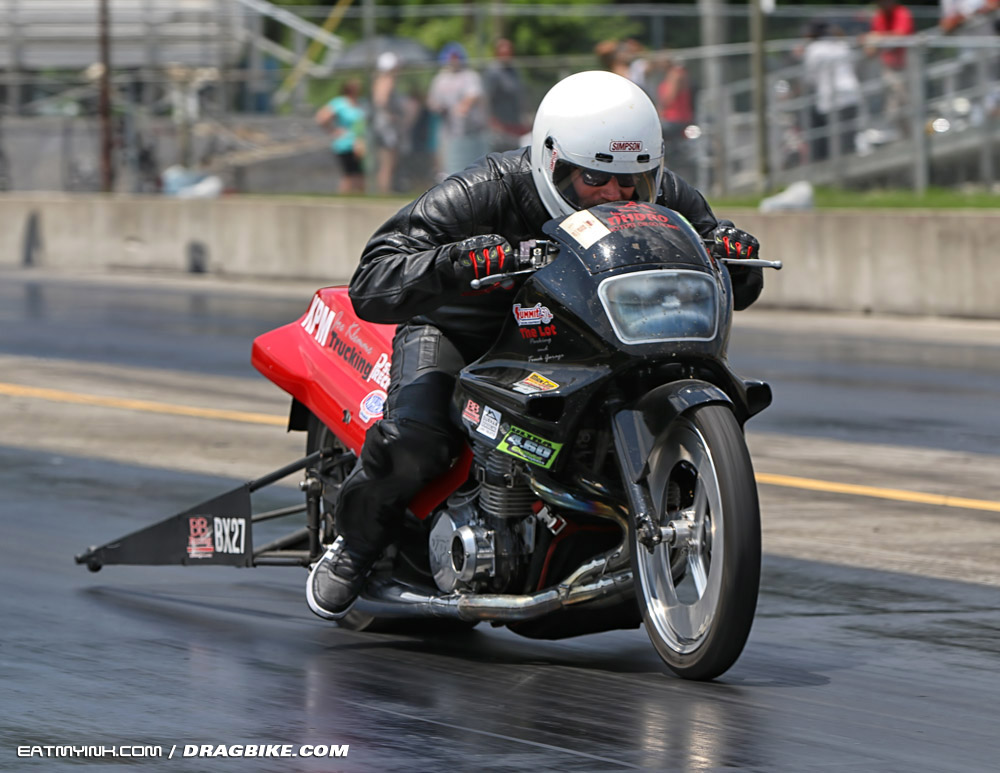 While waiting for the Penske Racing Shocks Street Fighter final, finalist Kevin Dennis asked NHDRO boss Brian Welch if he could have an NHDRO Big Check if he runner-upped. “No!” Welch shouted. “Aren’t you in the final? Why don’t you just win it?”

And that’s exactly what Dennis did—his first NHDRO win in a decade of trying. Dennis took the tree .044 to .056, then took the stripe 6.31 to 6.36, cutting gas when Dalton Markham had a shifting problem. 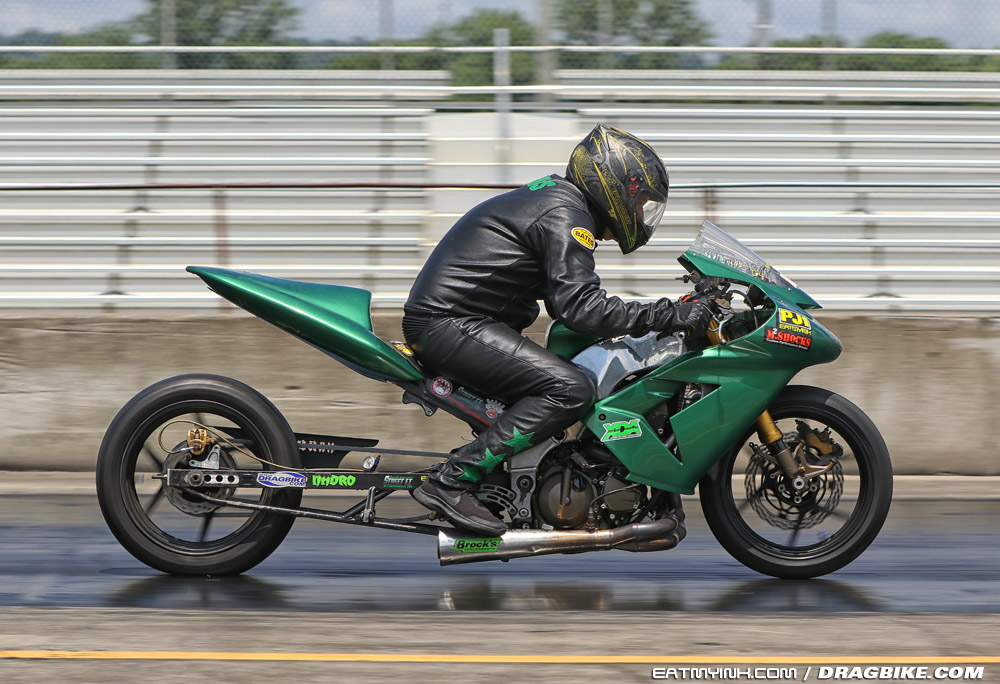 Number one Street Fighter qualifier Scott Sheppeard was only .0006 off the 6.15 index, then lost to Dennis in the quarterfinals.

Don’t worry about Dalton, as he took both MPS Pro ET races this weekend. Dalton treed Dustin Lee .019 to .035 in Saturday’s final and pushed the perennial champ to break out. Dalton’s dad John went -.008 red in Sunday’s final, granting his son an easy double. 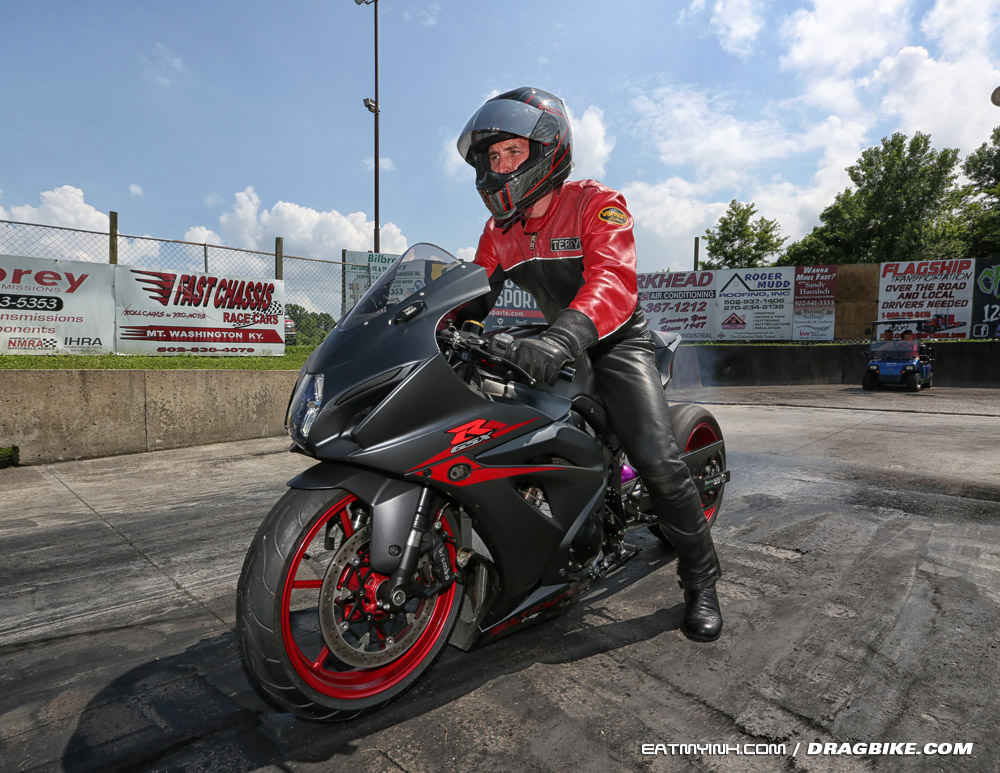 Clark Procter won Sunday’s Street ET final when Lee—not having his best weekend—nicked the redeye by -.002. 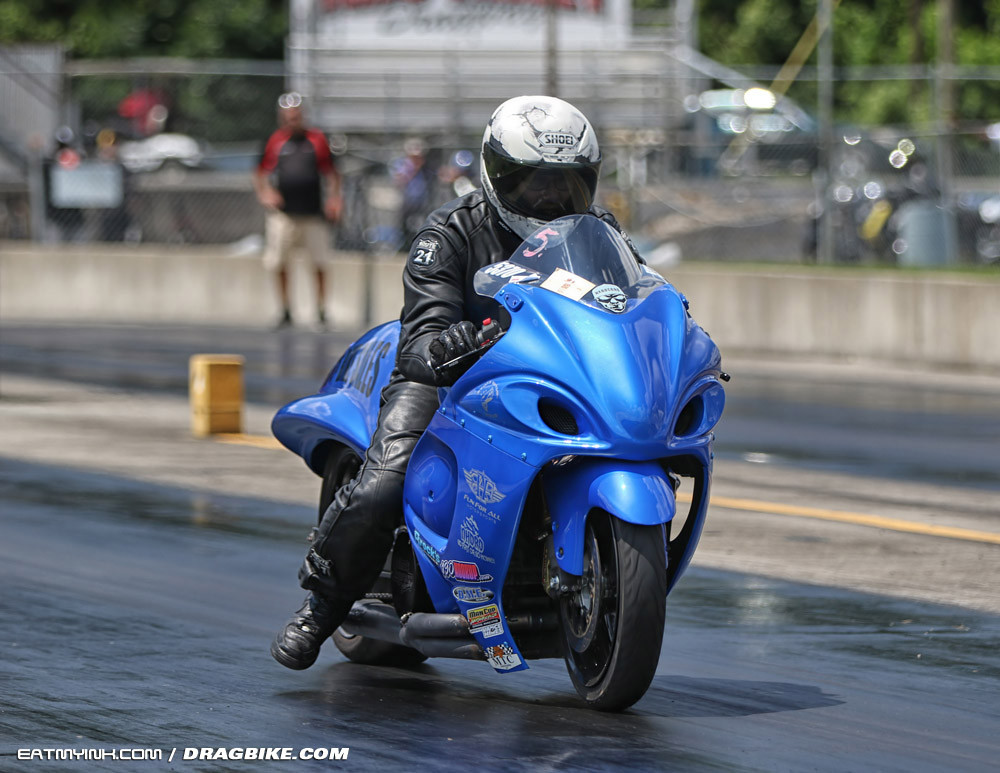 Louisville’s hottest grudge bikes lapped during VooDoo Grudge, Sonny Bolton won the pit bike race on a Yamaha Zuma, and all kids were winners in the kid’s race. 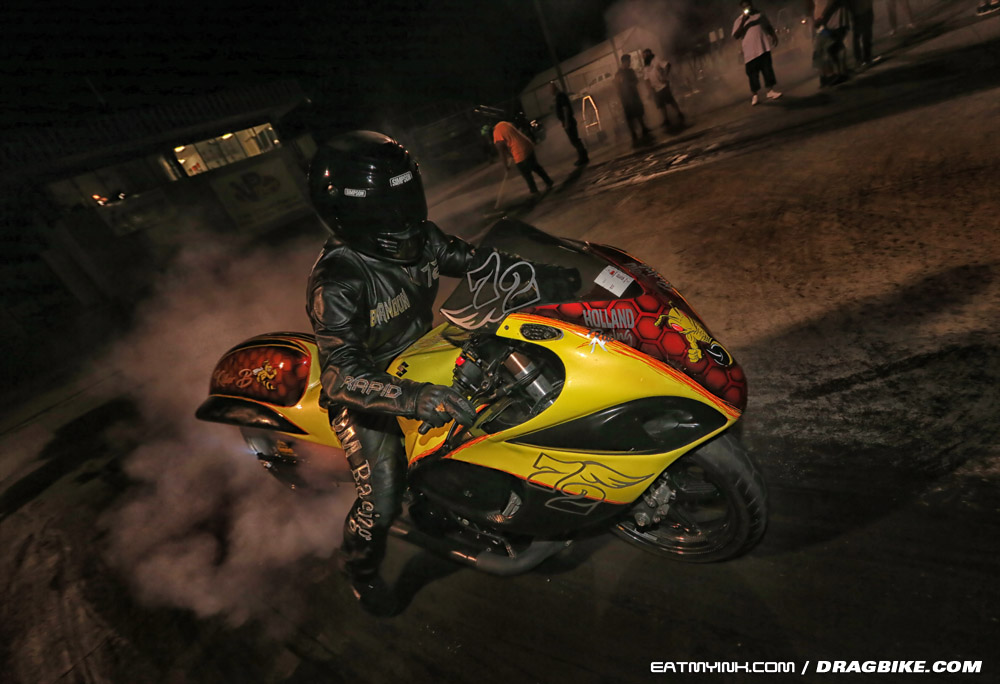 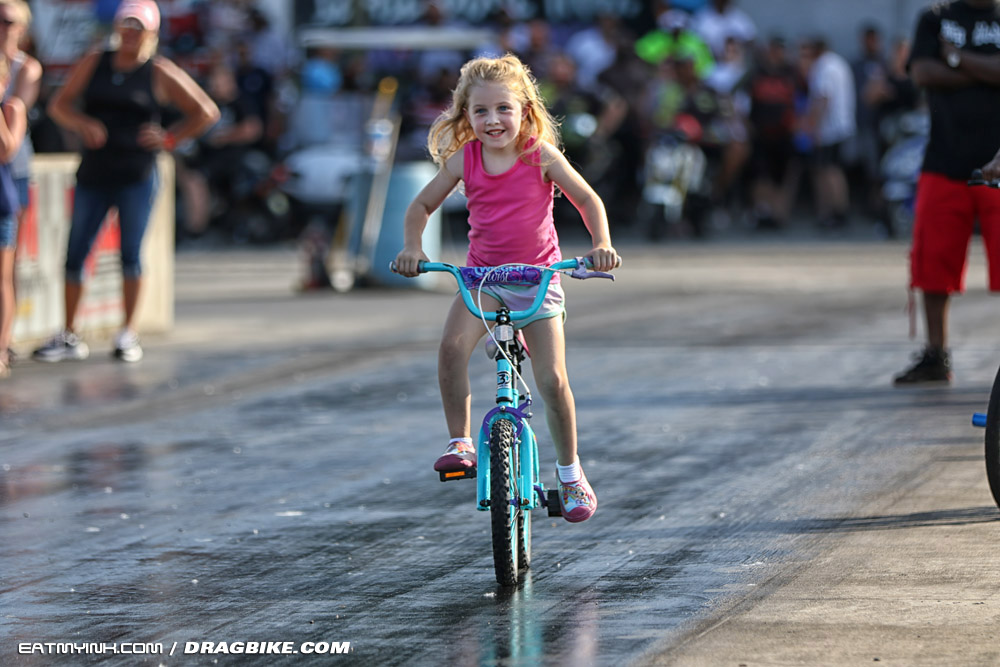 Brian and Niki Welch of NHDRO and José and Tina Gonzalez of CC Powersports thank everyone for coming out in the heat to celebrate July 4th weekend at Ohio Valley.

Now NHDRO looks forward to the BIG EVENT at Lucas Oil Raceway near Indianapolis. TWO bracket races will go down to win $16,000—one with and one without delay boxes. And Smokin’ Joe and all the 4.60 racers will be aiming for $5000. This is one event that any sportsman racer will NOT want to miss!