In this edition we wished to take the pulse on the teams, check what they are up to at the moment in their preparations for the race season and also what their plans and goals for 2012 – check out what a few of the UEM Drag Bike teams have to share! In addition you will find Swedish Pro Stock Bike rider Ulf Ögge featured in the “Europeans in the US” article and UK based Top Fuel Bike rider Ian Kingfeatured in a separate article in this edition. 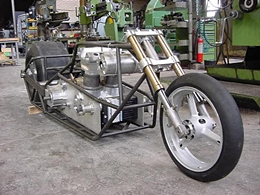 Olstad Racing Team are in the last part of the new bike project. At the moment it look good, and we have faith for engine start early May. That gives hope for at least 2 test weekends before the UEM start at Santa Pod. The new bike called “Thunderstruck” has a charged parallell-twin engine, 1700ccm to run 100% nitro. A brand new design made by Gerard Willemse from Netherland. The team colors will also get a facelift with new team shirts and a new painted bike. 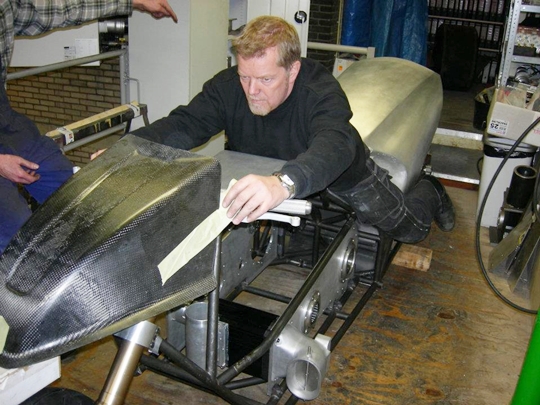 Hans Olav Olstad testing out his new ride – we expect team has an exciting season to look forward too!

Our plan is to do many runs as possible to get familiar with the bike. A complete new engine always give some surprise, and we hope it’s gone be nice surprises to. But we also know new engine can give lots of challenges. First step is to find the limit where the parts start to break, and stay below that line. The goal is to stabilize the bike on a level where we can tune and race. We know it’s a long way to go with a new bike.

The plans in regards to races, is to do the Nordic Super Twin Challenge and the whole UEM circus. Beside that we also hope to race the Norwegian Championship and Mosten in Denmark. So if we don’t break too much parts you will see us around much of the upcoming season 2012! 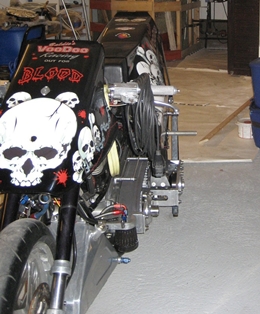 What is your team working with at the moment?
– First we must rebuild my shop / garage and get all the things sorted out after the water damage caused by the faulty heating boiler few weeks ago. Now we’re working on that and after that continue updating the bike with some new (service) parts for the this race season.

We plan to test and then race in mid May at Motopark, Finland. And then next weekend (Mayb 25-26th) we’ll race at Tierp EDRS / Nordic Super Twin Top Fuel race. After that I think that we’ll race the two more EDRS / Nordic Cup races (Gardermoen Norway and Alastaro Finland) and maybe some UEM races at Alastaro and Tierp. We’ll see… And my main goal for this season remains the same as it was last season: a 100% open throttle pass over the whole quarte rmile with both cylinders lit all the time!

Our team is working now with ignition, we will change from dyna to msd programmable ignition system. sounds easy but it takes some major changes to bike, fueltank moves from back of the bike to the front. And the oiltank needs to be remove also.

Skullracing team plan is to have a fun summer with the whole “racing family”, ride both, the EDRS Super Twin Bike Nordic Challenge and full UEM tour. And hopefylly Nate Gagnon comes with us also , at least few of those races (Nate from Canada participated in the UEM Drag Bike Championship also in 2011).

Our goal is to hopefylly keep the motors in one piece, and do a new personal best! Because the V60 motor has lot more power than what we have done by this far. 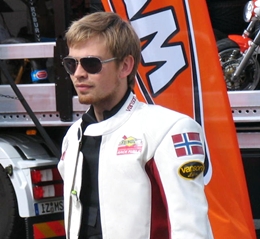 An update from the “juniors” in team Rolfstad., Super Twin Bike Norway

Jan Sturla Hegré is the youngest rider in the class. Svein Olav Rolfstad one of the most experienced and a great mentor to Jan Sturla. Jan Sturla shares this report;

The old Fast Cat have gone through review and has gotten a new hearth in the form of an Overkill engine. It fitted right in and it looks comfortable. 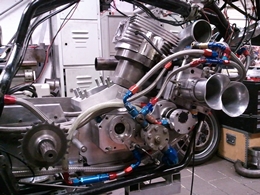 To counter this new power, both bikes are getting some nice safety chutes. Currently we are working on some new head design and some really nice and strong cranks for both bikes.

What are you plans and goal for the race season 2012? – After breaking a lot of parts in the 2011 season the team have decided to focus more on quality than quantity and the championship. We will try to go after the European record for real. It is on hight time someone break Charlie´s everlasting record. To counter alt the other teams trying for the same, like Jaska and the other supercharged beasts out there, we have made some changes in the team structure, and looking if we can go more Pro for this season. A big thanks to all our sponsors and supporters, especially Sunoco and Midthaug who help us greatly.

In 2011 the Gulf Oil DragRacing Top Fuel motorbike of Ian King came within a whisker of taking the UEM European Drag Racing title at the first time of asking.

The sensational 1500BHP bike won two European Championship rounds and posted some excellent times & finishing speeds but, according to its rider, it still has the potential to go significantly quicker. 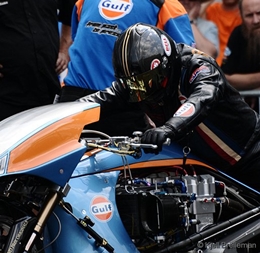 In the off-season the Gulf bike toured India, appearing at various Gulf Oil Corporation events and wowing crowds, as Ian King pulled off huge burn-outs and demonstration runs with the monster machine, often on roads specially closed off for the occasion.

Like the factory Aston Martin Racing cars, the Gulf Top Fuel bike also uses Gulf lubricants and Ian King is hoping that the promise the bike has shown will be fully realised in 2012, to deliver for him an impressive sixth European crown.

The Gulf Oil DragRacing Team is a unique initiative, with sponsorship coming from various Gulf affiliates around the globe together with Gulf’s Official Clothing licensee, Dakota (under its Grand Prix Originals brand).

Gulf Oil International Brand and Marketing Manager Sam Cork (pictured at the launch of the new Gulf liveried Aston Martin GTE), is understandably excited about the 2012 season. “All of this activity means that there could be seven or even eight Gulf cars at various rounds of the World Endurance Championship, which would be incredible. Also, with a Gulf presence in the Blancpain Series and the awesome drag racing top fuel bike, there is an incredible motor sport programme for Gulf businesses and fans around the world to buy into. As the brand has continued to grow so has the motorsport programme and the 2012 season presents a truly mouth watering prospect.”

No less than three European drag racers at the entry list for this year’s NHRA Tire Kingdom Gatornationals, the third round of the NHRA Full Throttle Drag Racing Series. All three showed great form, qualified for eliminations and let their opponents run for their money in the first round. But still they did not survive that first round in the world’s most competitive drag racing championship.

For the first time in his career Ulf Ȍgge entered the NHRA competition. For the former UEM European Pro Stock Bike champion the difficult task to qualify in the top 16 of the 25 bike ultra-competitive field. Bad luck on Friday as on the first run a two dollar part in the transmission broke and Ȍgge had to abort the run. Even more drama in the second run as the bike broke in the burn out. The next run Saturday morning was already much better but heavy wind sent Ȍgge to the wall and he had to lift with a 7.374 sec as a result. But in the last run everything fell into place and with a great 7.034 sec Ȍgge climbed from the 23th to the 16th position and was in the ladder! A great performance after all the problems and only one full pass. But as the number 16 qualifier the Swede had to face Eddie Krawiec, the number one qualifier. Ȍgge did his very best but Krawiec’s 6.831 sec was too much for the Swede’s 7.054 sec. 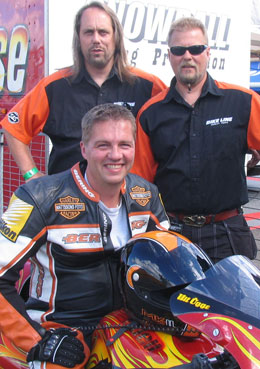 Ögge with mechanics Ola and Peter

Ulf Ögge the Swedish Pro Stock Motorcycle rider made his first race in the US at the NHRA Gatornationals, he shipped his complete machine over and was helped by John hammock of Vroom Racing. The team had tested earlier at a windy Valdosta in Georgia but here at the Gators suffered two bad qualifying rounds as a broken shim or washer caused problems in the transmission the first session ending up with Ögge’s bike being manhandled back to the startline. Session three delivered a 7.374/151 that was bettered in the final session with a 7.034/187 that put him in the number sixteen spot which proved somewhat un-nerving having to watch as other riders tried to put him off the bubble as he sat astride the bike at the top end being interviewed and shown on the big screen. Opponent for round one of eliminations was the new national ET record holder Eddie Krawiec who sat at number one with a stunning 6.750 with a speed of 198.03mph. The Sunday had changing weather conditions but it was all over in round one as Krawiec sped to the win with a 6.831/196 leaving Ulf Ögge to follow with a 7.054/186 try. Ögge was pleased to have made round one and overcome the frustrating earlier qualifying problems. 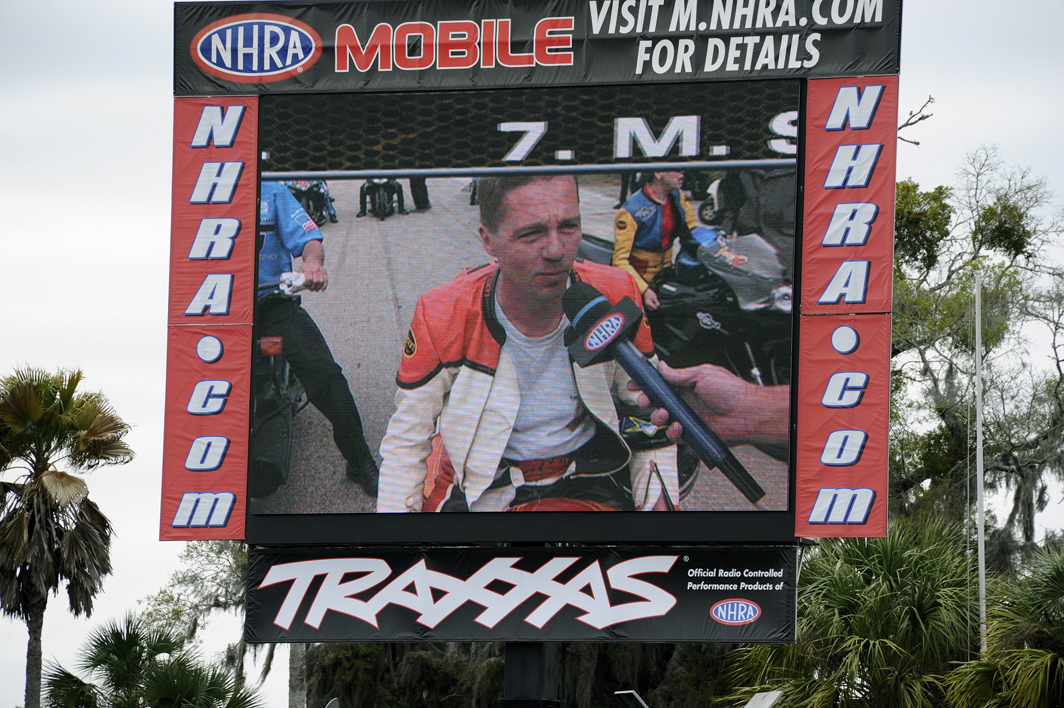