It was an awesome weekend even though we were the first loser in Real Street. We came off the trailer strong on Friday with a 7.71 and decided not to make any more laps on the motor and focus on the index bike instead (big mistake). After looking over the data we decided to step it up and try to get into the 7.60’s in the heat. But that decision just upset the chassis and was wheelie happy, in round one of qualifying we went 7.89 after lifting twice to keep it down. 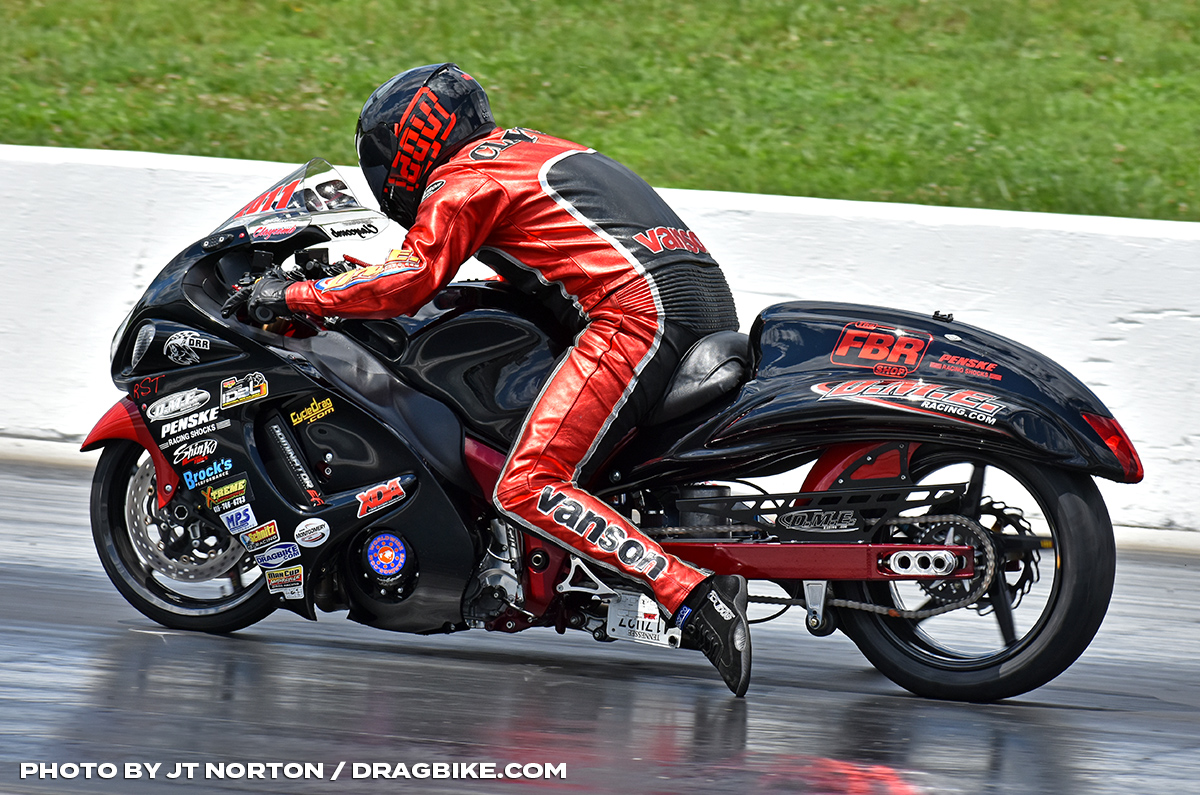 For round two of qualifying, we left the tune-up alone because I thought it was just me causing the bike to wheelie. And that was another bad decision as it left in a wheelie again and I had to lift some before the 1-2 shift which made the bike go rich,  and when I hit the shift BOOM! It popped pretty bad,  burnt the injector harness injectors,  even the harness under the tail, and melted my throttle body bells. I got it stopped and was looking for a fire extinguisher,  but thank god it put itself out!

After our fireworks in Q2 we got everything bandaged up the best we could and turned the knobs back and just wanted to go A to B. I haven’t been that nervous in a while to hit a shift button! She shifted and went 7.79 to get our 5th in a row number 1 qualifier spot. 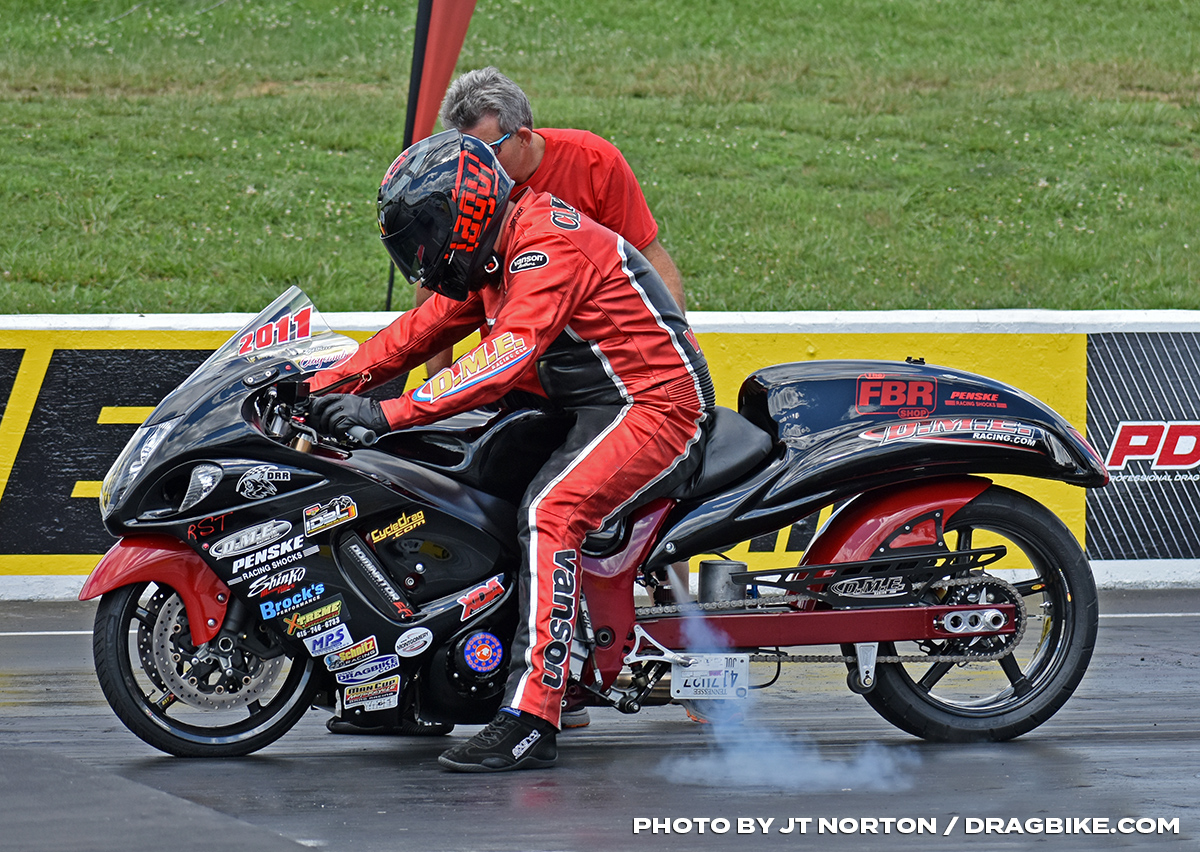 On Sunday we just raced smart,  first round and 2nd round I had Alisha Malone and Anibal Merced, so we turned or knobs up a lil and we were ready to hurt some feelings! In round two against Merced we got a bye when he broke and ran at 7.77 after I lifted from a wheelie again. The final was set me and Eddie Chapman and we knew it was going to be a knock down drag out race and it sure was!  We had the tree with a .075 to his .076,  I had a lazy 60 ft but I didn’t see him untill about 1200 ft and then I saw that orange nose creeping up on me and he took the stripe with a 7.72 to my 7.76 (I was turbo f****d in better words), but even though we lost in the final it was awesome! On the index bike we were taking it one round at a time, we had a lot of tight races but best one was with Dustin Lee in 5.60, we had the same light and we went 5.60 to his 5.59 fun race for sure. But the rain got us at 3 bikes in 8.88 and 5 in 5.60 and we had to split up the money… lucky for them,  ha just saying.

All together it was a good weekend with 1 qualifier spot, runner-up in Real Street, and money in both index classes and we loaded both bikes up running!

HUGE THANK YOU TO ALL MY SPONSORS 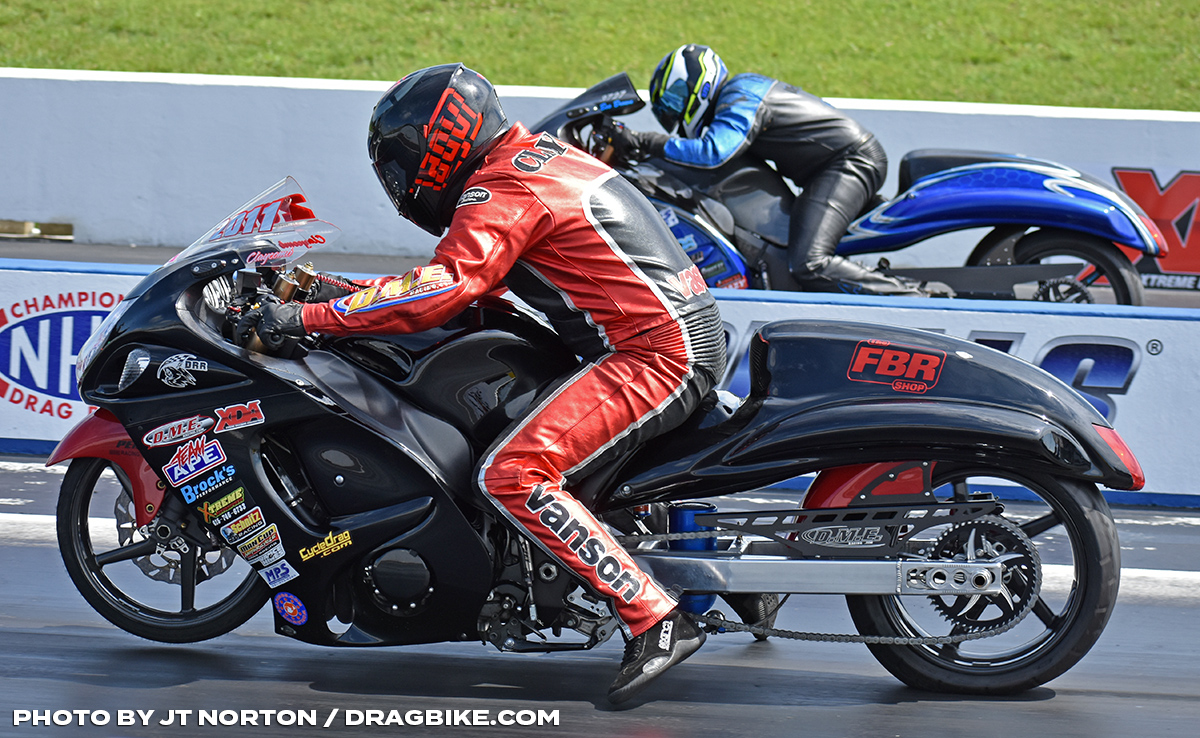