Spiderman at The Rock for Man Cup DME Nationals

THIS ‘SPIDERMAN’ CAN DO EVEN MORE THAN A SPIDER CAN

Directing a motorcycle from Point A to Point B on a straight line isn’t that difficult unless, of course, you’re Larry “Spiderman” McBride and the bike in question is a 1200 horsepower, two-wheel nightmare of a Suzuki capable of accelerating from zero to almost 260 miles per hour in little more than 5.6 seconds.

That’d be zero-to-260 in the length of a typical city block, stoplight to stoplight.

It’s on that bike that the motorcycle drag racing legend from Newport News, Va., will try to add yet another victory this week at Rockingham Dragway where he will defend his DME Racing Nationals Top Fuel title against former winner Chris Hand of Nauvoo, Ala., and current Man Cup point leader David Vantine of Hamilton, N.Y. 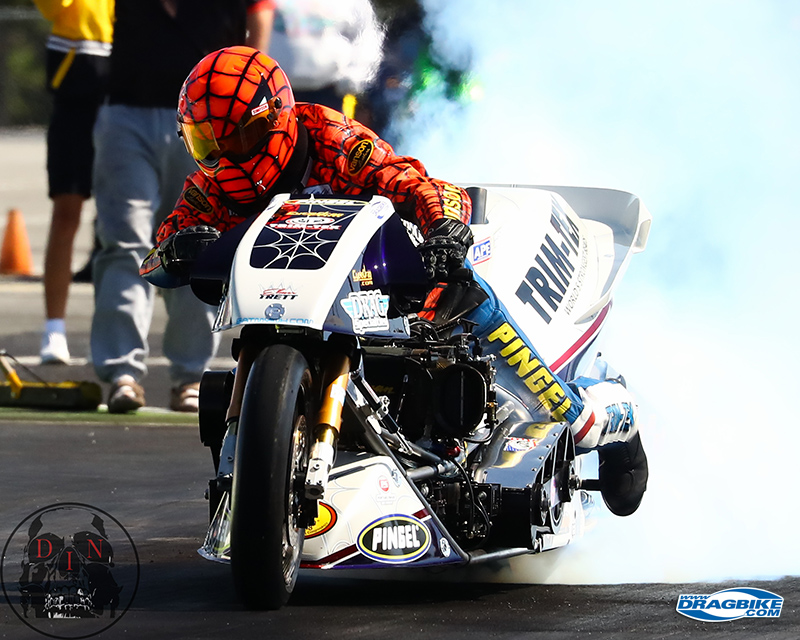 Winner of a record 18 series titles including last year’s Man Cup, McBride in 1999 became the first rider to cover the quarter mile in fewer than 6.00 seconds. Now, he is trying to become the first to eclipse not only the 5.60 second barrier but also a 260 mile-an-hour standard once thought beyond the realm of possibility.

After racing to a then-record 255.29 mph en route to victory last year at The Rock, McBride went 258.27 at Valdosta, Ga. on the same weekend that he recorded the quickest time ever at 5.611 seconds.

McBride allegedly owes his nickname to the spider-like way he moves atop the bike in keeping it on a relatively straight course, “relatively” being the operative word.

In Pro Fuel, it’ll be a clash of the titans with reigning Man Cup champion and current point leader Preston Bartlett of St. Augustine, Fla., opposing reigning AMRA and ADRL champ Janette Thornley of Statesville, among others.

A Friday test-and-tune session will lead into pro qualifying on Saturday at 11:30 a.m., 3 p.m. and 7 p.m. Sunday’s schedule will include the first round of Top Fuel racing at 11 a.m.

Individual adult tickets to the DME Nationals are $25 on Saturday and $20 on Sunday. A full event pass good for Friday, Saturday and Sunday is $40. Children six and under are free when accompanied by a ticketed adult and parking is free in Rockingham’s main lot.