With the rebuilding of The Strip at Las Vegas Motor Speedway to a four-wide track. It was going to be closed this spring if the Sportsman Motorcycle Bracket Shootout was going to have the March date. Turns out it wasn’t to be but event organizer, Kahea Woods worked with LVMS to have a fall date. September 29th was the date chosen. Motorcycle and snowmobile riders from 5 states showed up and the total count was 40. Miles Hauer, Camano Island, Washington had the longest tow and got $100 gift certificate from Grothus Dragbikes. So that meant $4000 was up for grabs in prize money. Many sponsors came aboard and handed out various performance and drawing prizes. Riders were asked to bring pet food to donate to Moondoggy Surf for Adopt A Rescue Pet. Thanks for all the support from the sponsors! 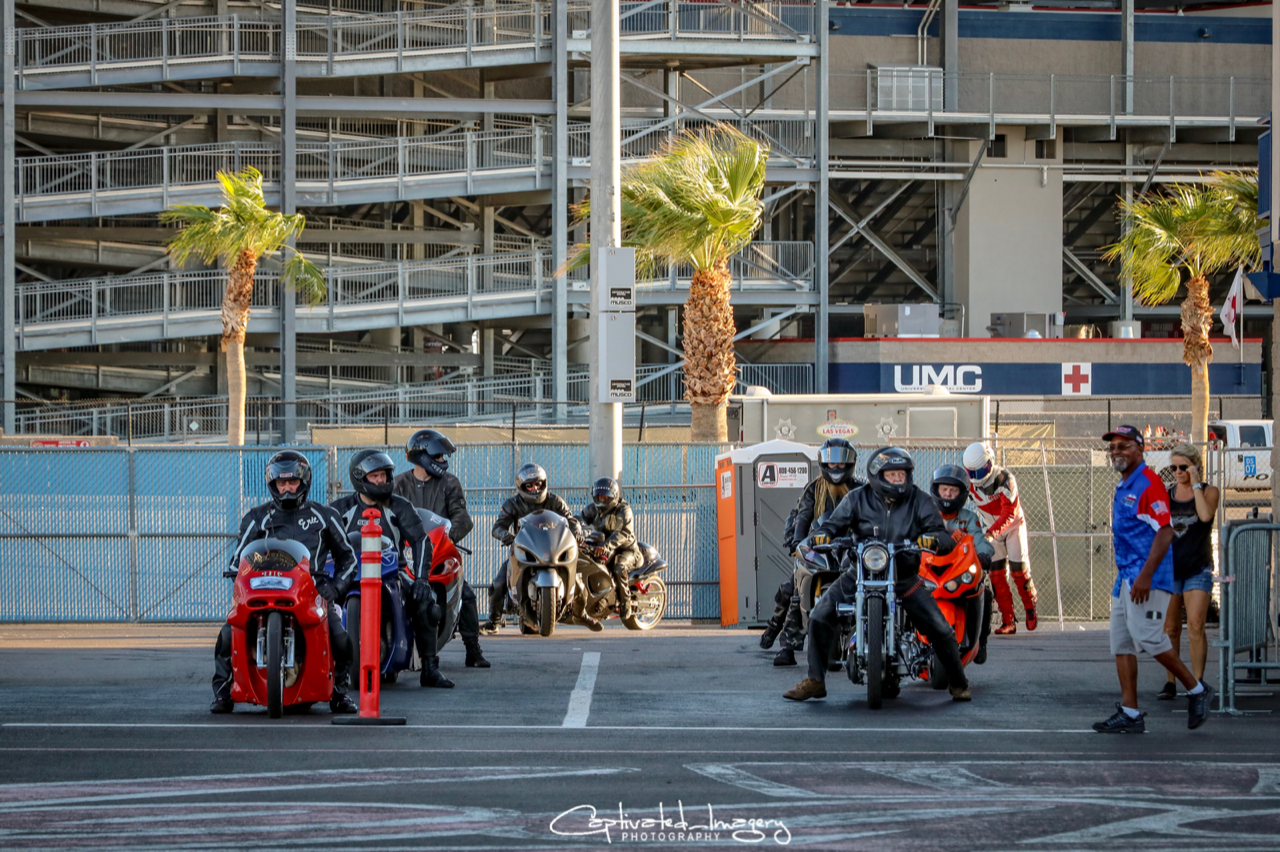 We had one major rule change this year. Since D7 (and D6) are allowing delay boxes, they were also legal in this race the first time. Event organizer Kahea Woods kept the #1 spot with a nice .001 reaction time. Performance Cycle was giving away a free head port job to the #1 qualifier. Kahea decided to give that away to another racer. Cheyanne Duvall, West Jordan, Utah won the drawing for that. The number two qualifier was Dave “Wheels” Wheeler, Murray, Utah. He had a .002 and also gets a $50 gift card from Carter Powersports for being the highest qualified non-bar bike. Other prizes in qualifying were, #7 qualifier Aaron Pine, La Mirida, California gets $100 from APE. The #19 qualifier was Mo Rider, Kearns, Utah, and gets a $50 gift card from Carter Powersports. The “Not so #1 qualifier” was David Phillips and he gets $100 gift certificate from Liguori Drag Racing. 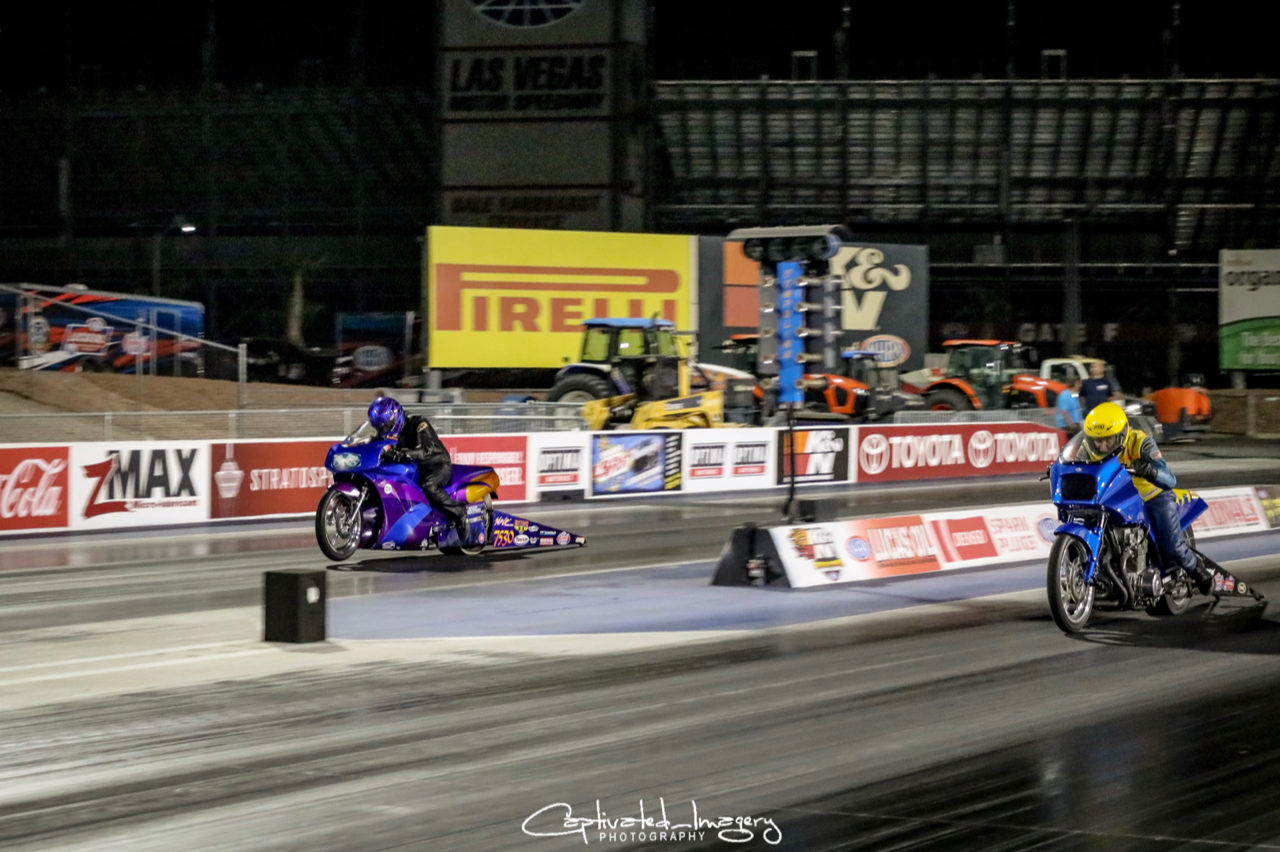 In the second round, out of the ten pair running, four had redlights.

Geddy Getz won over Justin Perea with a redlight by Justin.

Jay Thompson beat Chris Ragan with a reaction time advantage .022 vs .086 with Chris running right on his 8.075. Ragan wins $100 for the best-losing package in the 2nd round from GoFast Bike Parts.

Justin King also had a win over Larry Mota with a reaction time of .005 to .020 for force Mota to breakout.

Don Nielsen beat Cody Cumpton with an advantage of .042 to .127 reaction.

Rick Newport needed a .004 to force Tyler Anderson to break out with his .017 reaction.

Aaron Pine had a .009 to get Jeremy March to breakout.

Leo Shaver won when Eddie Sharron redlighted with a -.082. 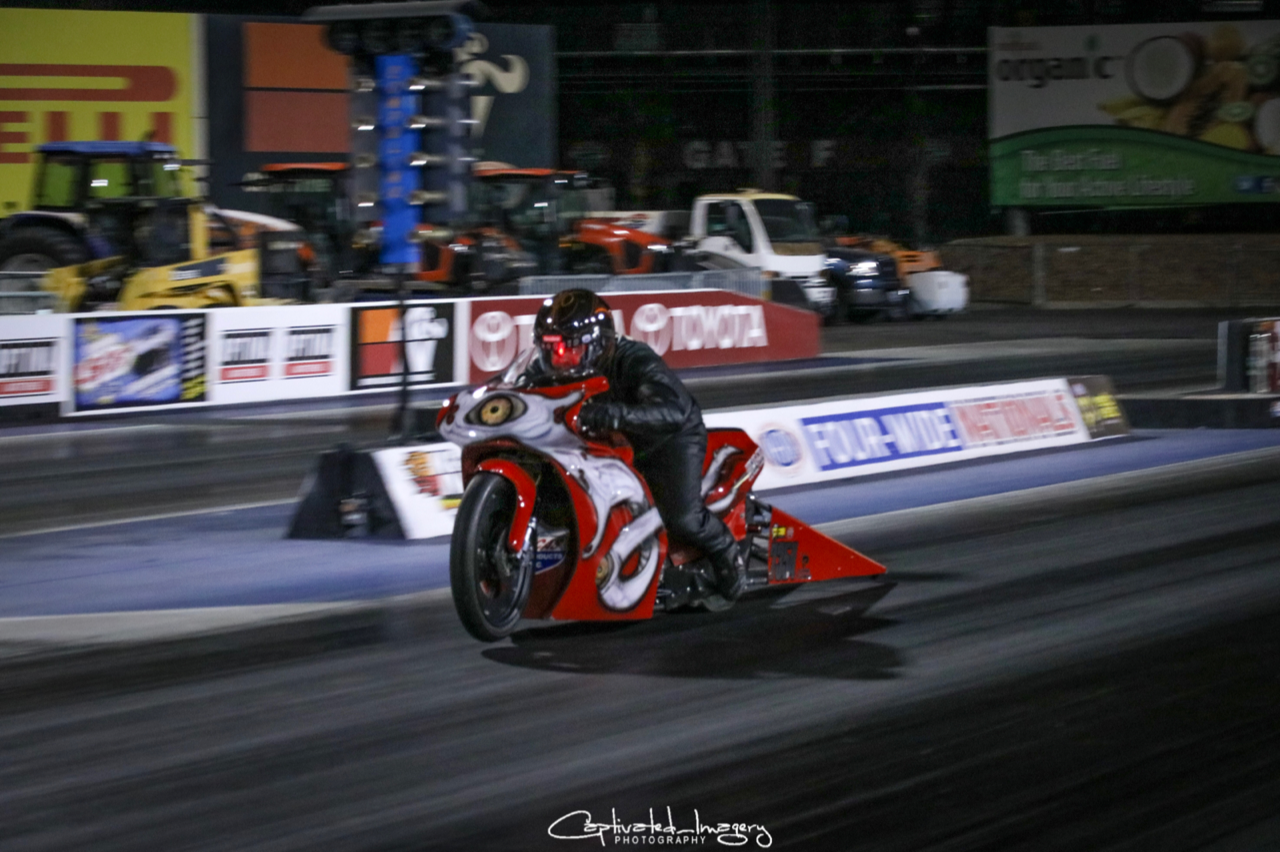 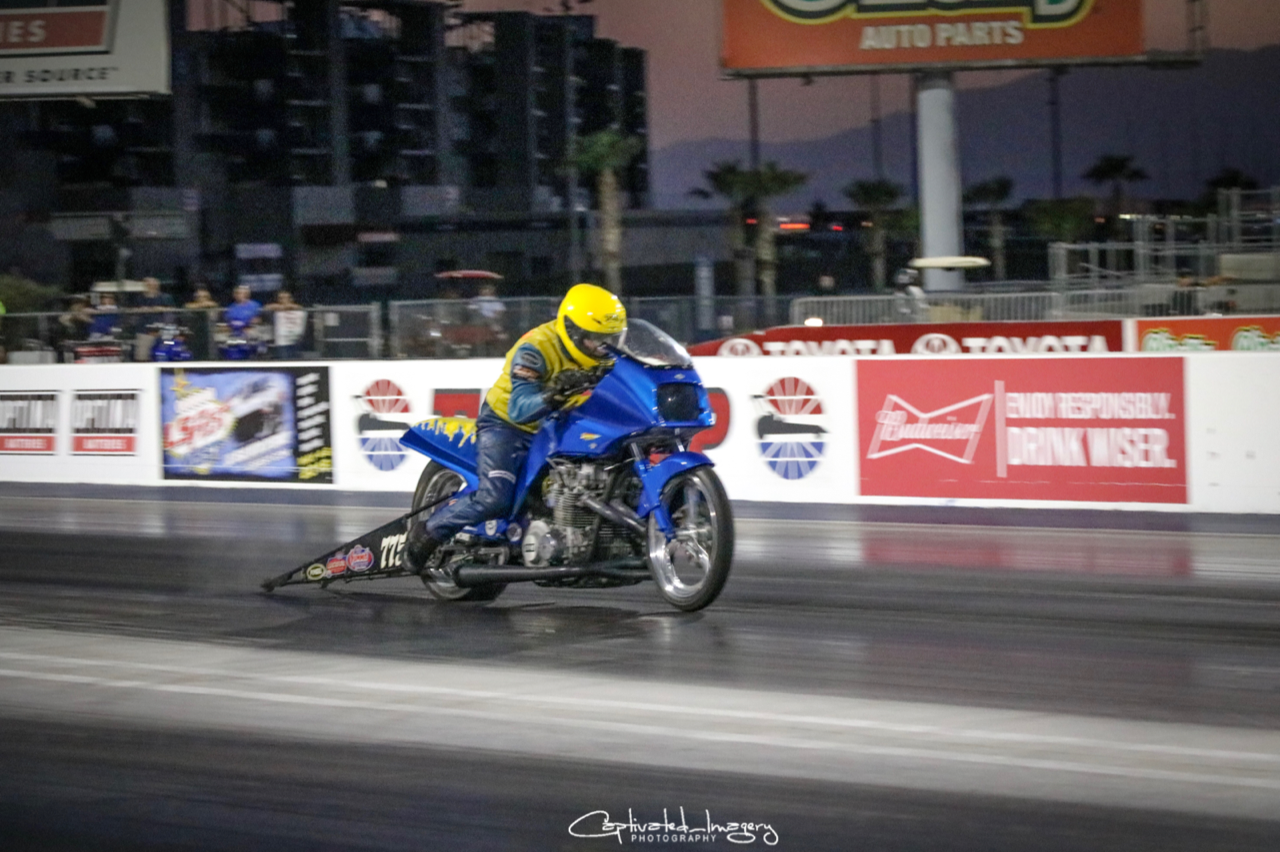 Along with their split of the $4000 purse they also get some extras from the sponsors. Moondoggy Surf gave $400 to Shaver and $100 to Miller. Both get $50 gift certificates from Liguori Drag Racing.

After the race, the BBQ dinner was provided by Road Kill Grill of Las Vegas by John Mull. Also many drawings were held and thanks to Lucas Oil, Primo Customs, Liguori Drag Racing and Captivated Imagery (Andrew Perez).

One story we must mention was Jeremy Bates flipped his Hayabusa off the starting line. Thankfully, he felt good enough to continue the rest of the weekend. His bike was a little more broken up. Bryan Duvall had a spare bike in his trailer and gave him the parts he needed to continue on Saturday. With labor help from Dave Wheeler and Tj Stufflebeam he was able to race and make it to the 4th round. Thanks to all who helped him.

So another great Sportsman Motorcycle Bracket Shootout is in the books. It just keeps getting bigger and better. Again, thanks to Kahea Woods for organizing it, LVMS Jeff Foster and staff for all their help and all the sponsors and racers that make this one of the best races of the year! 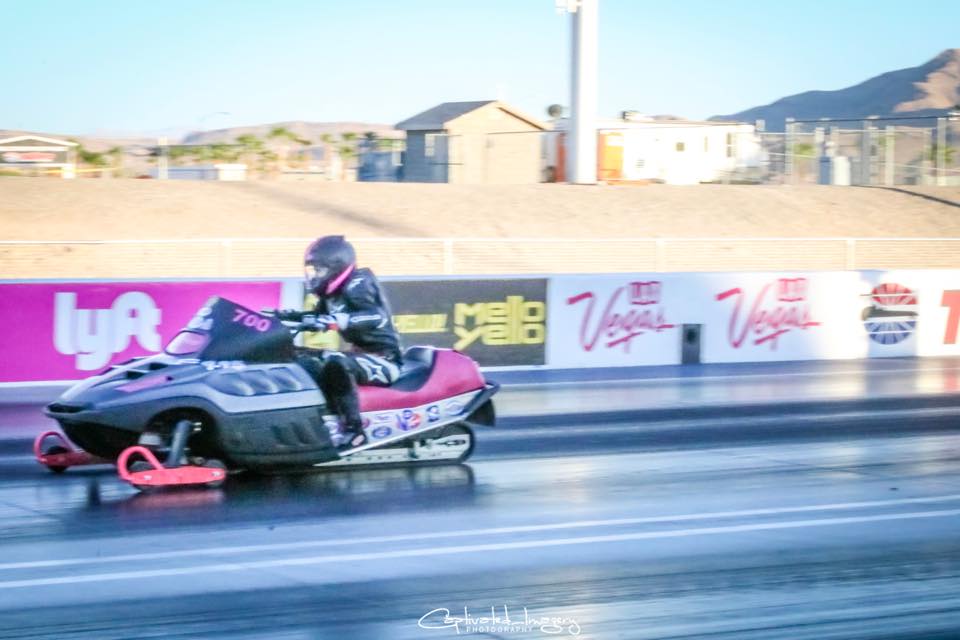 Cheyanne Duvall won the drawing for the porting from Performance Cycle 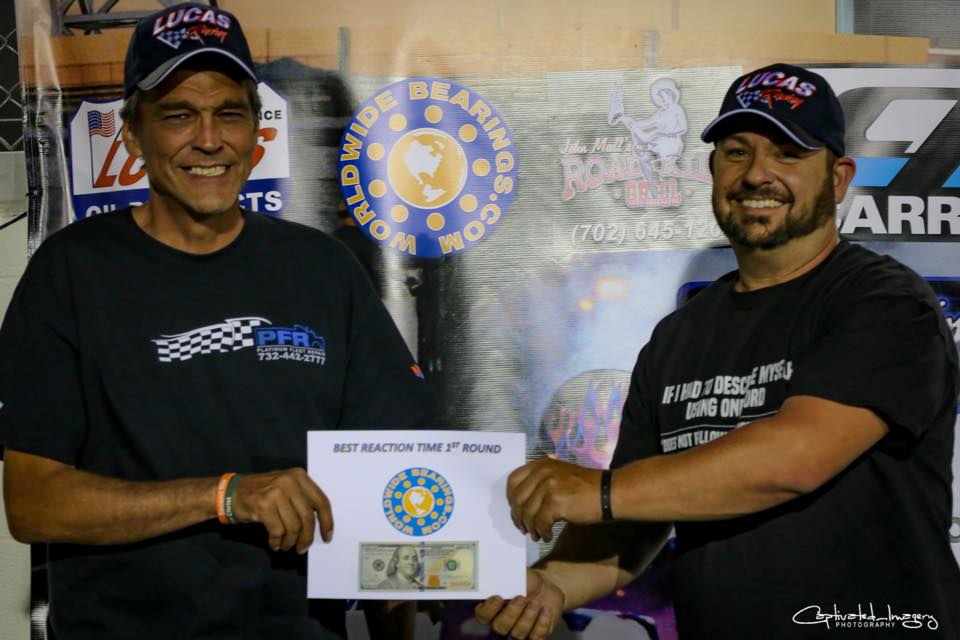 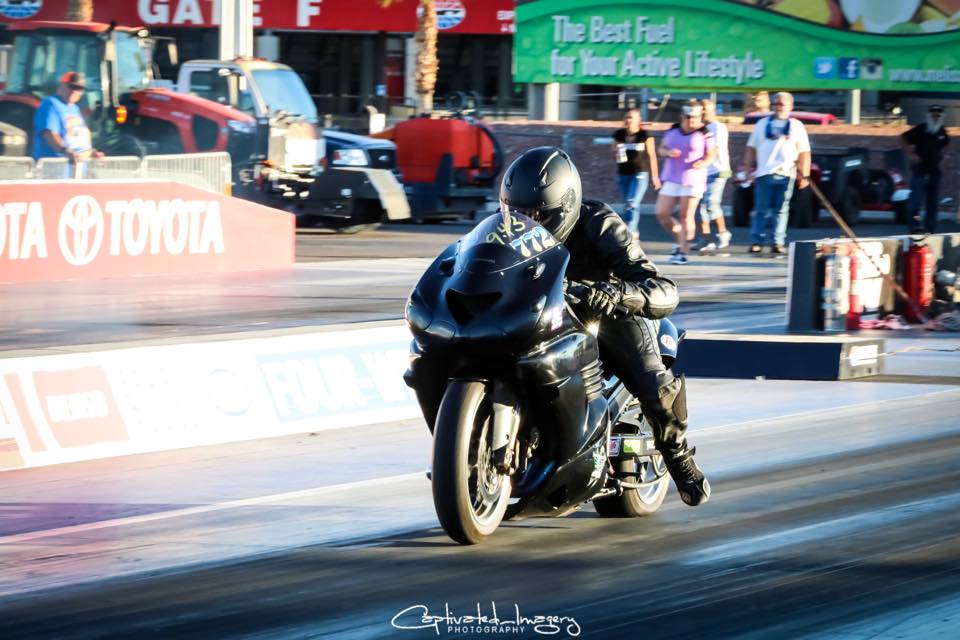 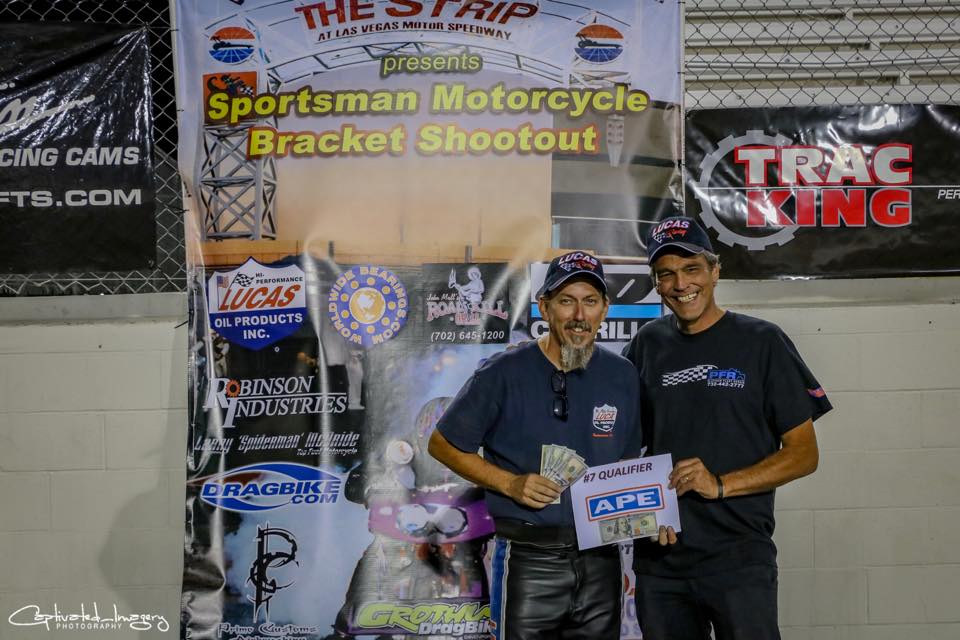 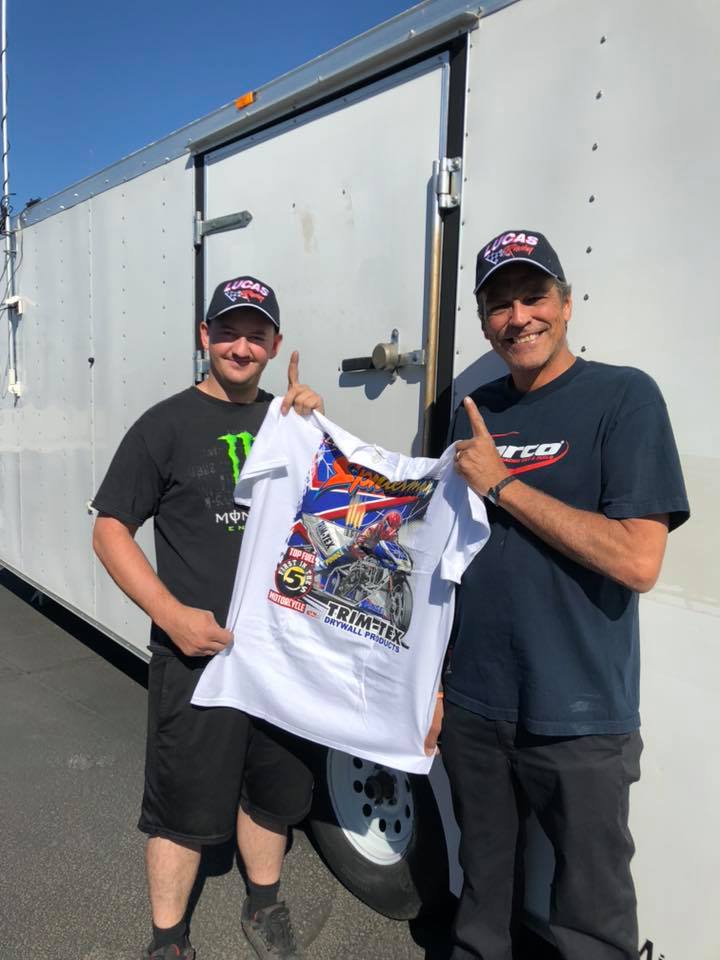 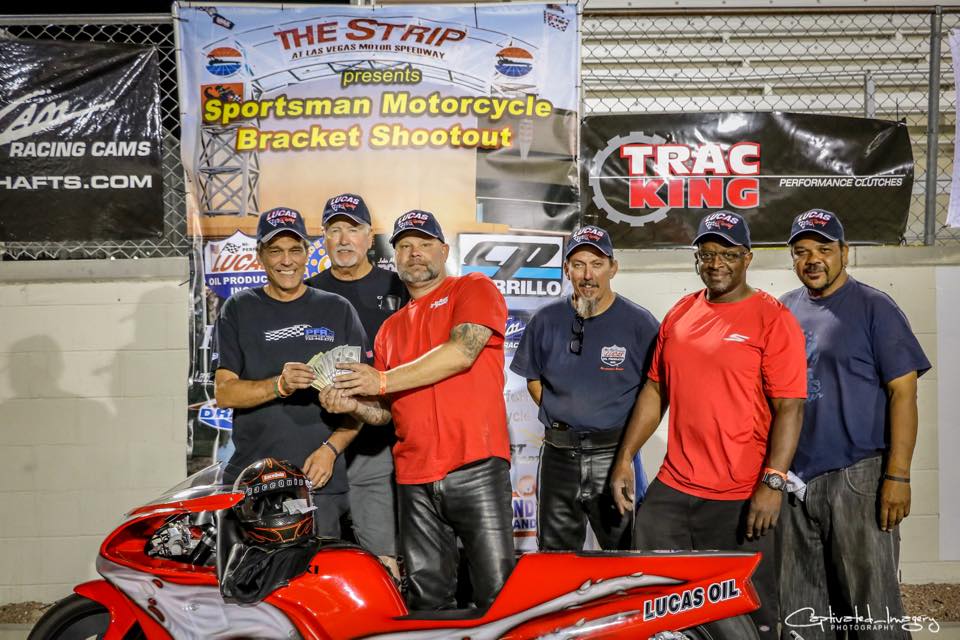 Dave Miller with the cash and gift certificate he wins for 2nd place. 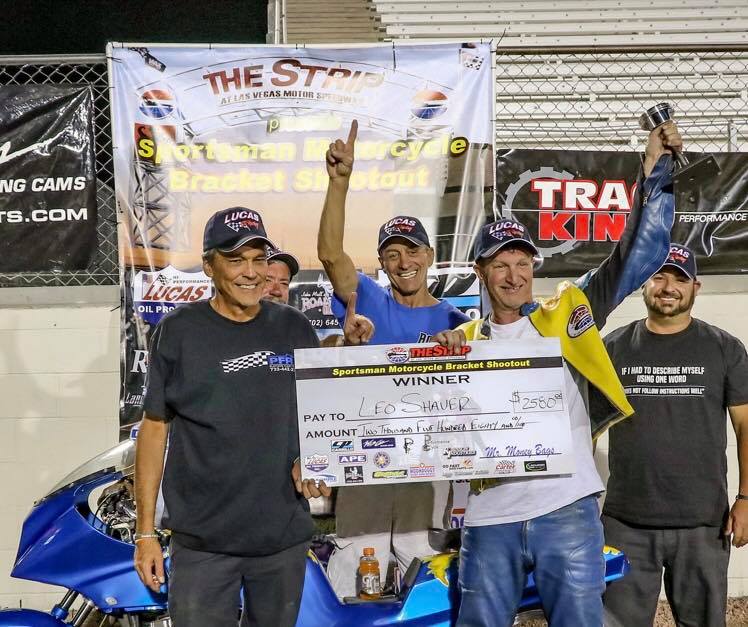 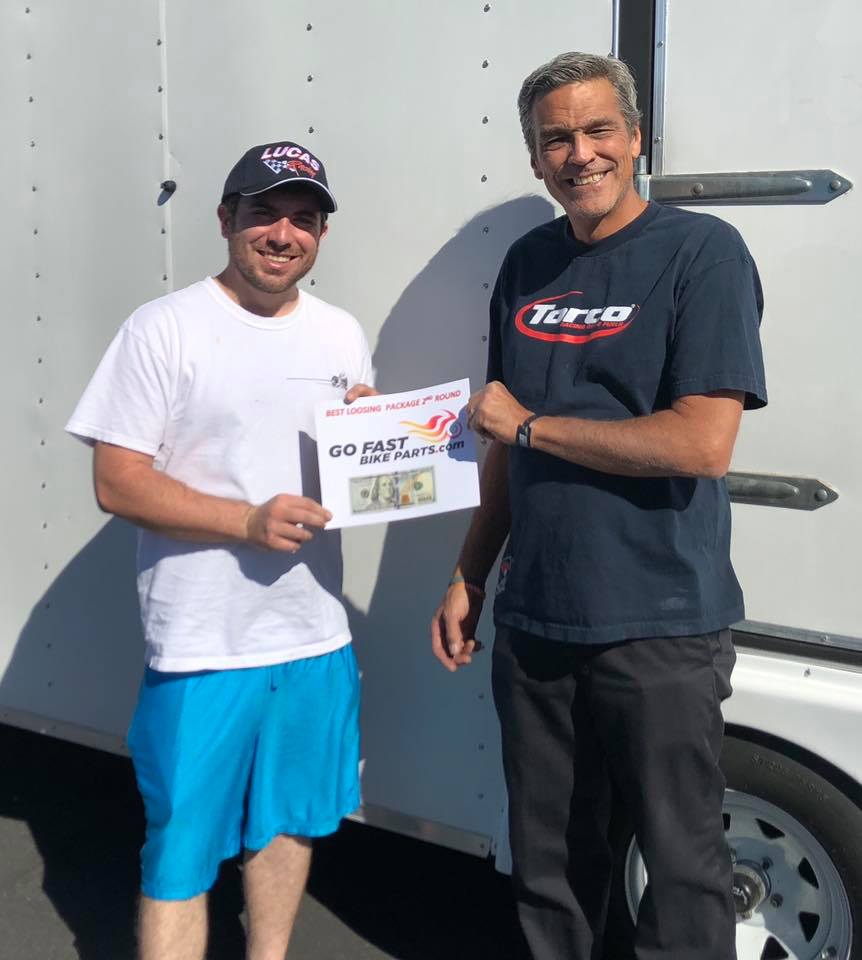 Chris Ragan best losing package 2nd round gets $100 from GoFastBikeParts. 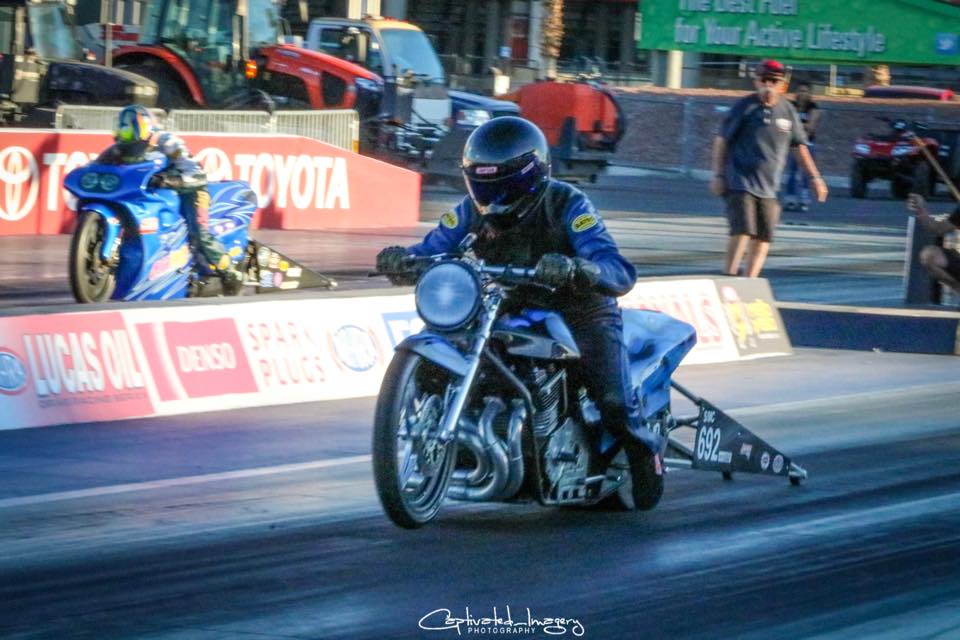 Miles Hauer made the longest tow from Camano Island, Washington 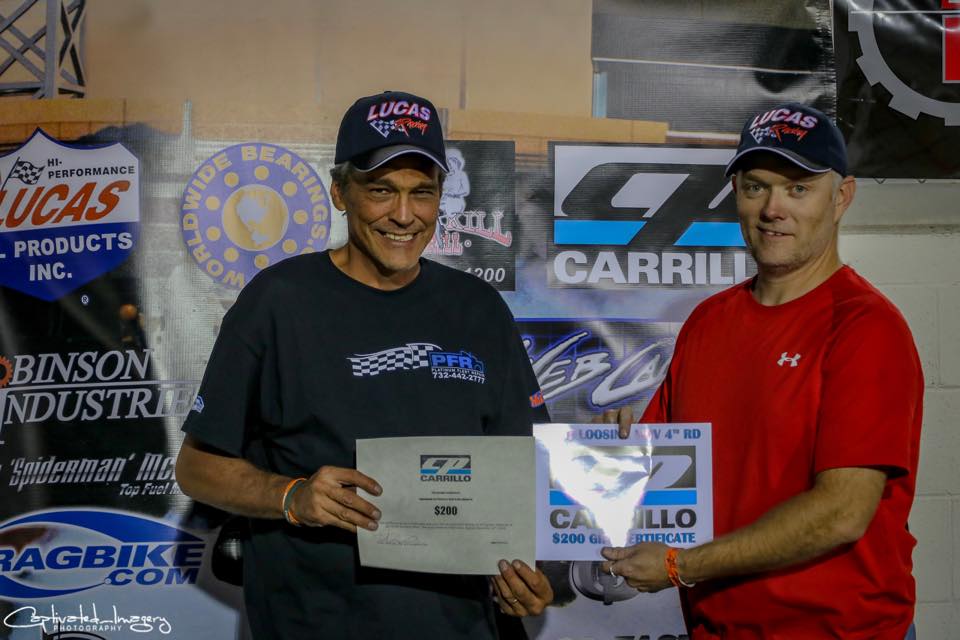 After a testing crash Friday, Jeremy Bates was patched back together and went to the 4th round. He had the best losing MOV in the 4th round and won a $200 CP-Carillo gift certificate and also highest finishing FI bike for a free cleaning and service from GoFastBikeParts. 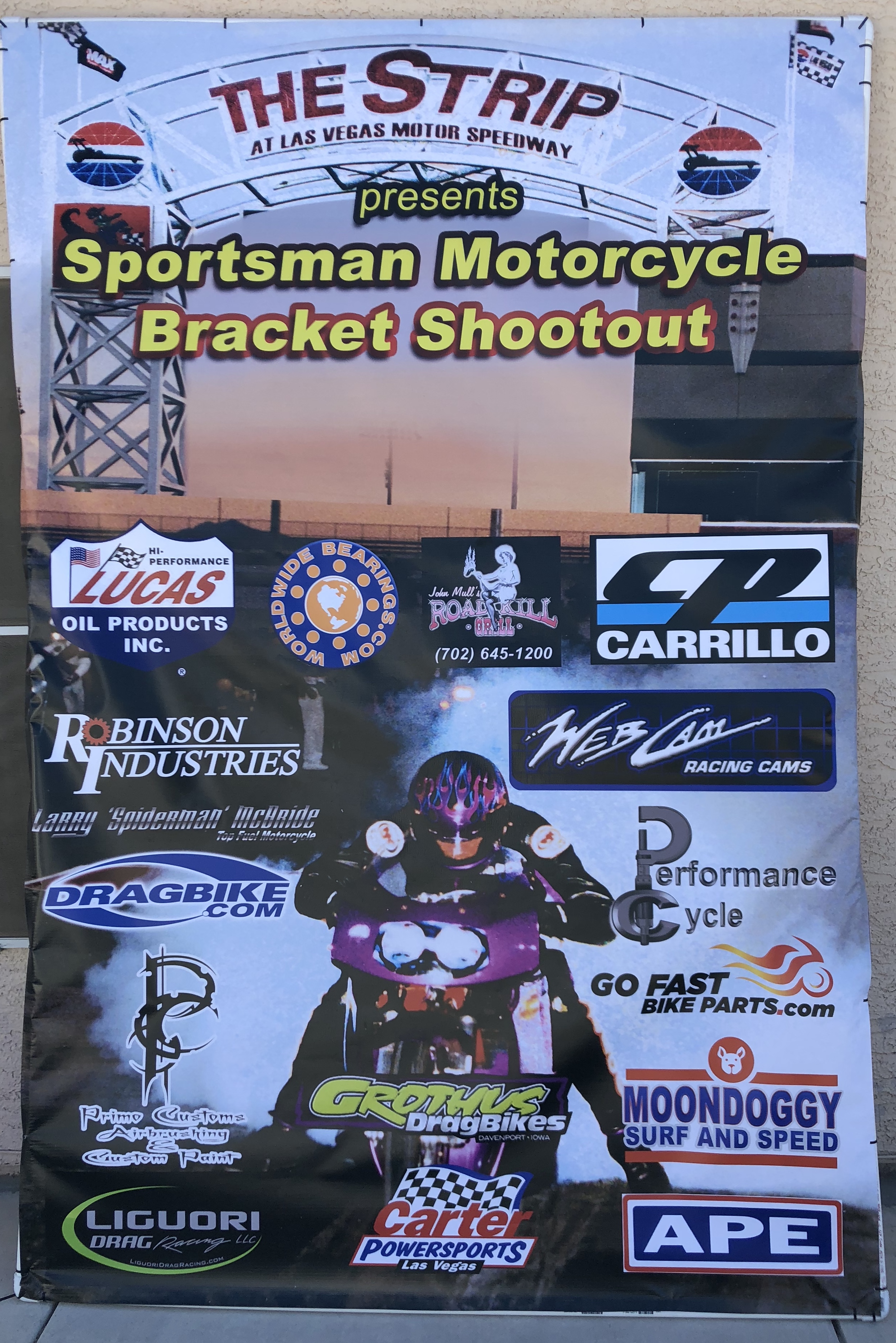