HomeEvent CoverageStacks at the Track : MSP Takes a Hit

Stacks at the Track : MSP Takes a Hit

$TACKS at the TRACK

We all knew all about Keith “Shine” Dennis, but The Word was being spread to the general motorcycling public in an issue of Motorcyclist seemingly devoted only to Keith. And here he was, ready to back up those pages and make some stacks at Prostar’s Streetbike Chaos Saturday night at Norwalk. Or was this race slipped in on Friday? So much racing, it’s hard to tell.

Shine was on the legendary Marlon-owned, Joe Marasco prepared Lulu II, sporting a new carbon fiber tail on the recently lengthened ‘Busa. In the left lane was Johnny “Airtime” Locklear on a blue ‘Busa with yellow decals. Country eyed the two bikes suspiciously. Who owns that blue bike, Country? “I don’t know whose bike that is,” said Country, whose support is nonetheless firmly behind the blue bike from North Carolina. Turns out it was owned by a guy named Trey. As in “3.” But there were more than 3 stacks on the table for this one, as the chips reached 5 per side. 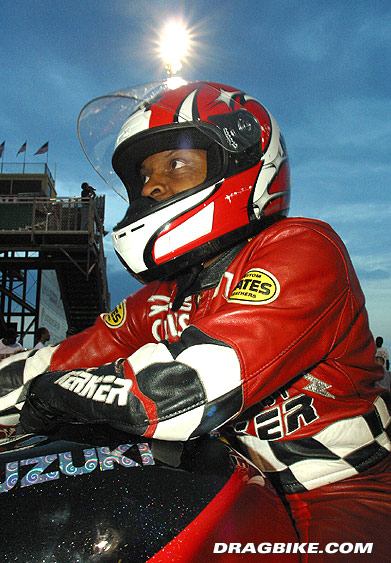 But there was a delay…or was there? Which night was this? Was Kevin Adams schmoozing the Norwalk starter? So much Nutec and Nitrous, the mind fails. But the race was on, under the lights. Shine released the slider and took a big lead early. Hands were already reaching for the middleman. Locklear appeared to struggle as the bike wheelied, bottomed out and showered sparks. Shine was 2 bikes ahead, tucked in, and disappearing quickly into the night. But Locklear’s winlight came on! Looks of disbelief on one side and shouts of triumph on the other. “I told you! I told you we bad!” shouted Country.

“I passed him past 1000′, or through the blocks, really,” reported Johnny.

“We took a chance,” Marasco said about racing the long bike in St. Louis. “So we put a swingarm on it. And they were nowhere to be found. Now they beat us first time on the track with a swingarm.”

Locklear wasn’t interested in the swingarm. He was more impressed with his ability to beat Dennis without a slider. “Johnny’s got a built-in slider,” He grinned, pointing at his left hand.

“Carolina Boys make the fastest streetbikes on motor!” boasted Hollywood. Carolina maybe, but both of the Lulu beaters were on Johnny power. “Built on Locklear’s kitchen table,” said Hollywood.

In other Norwalk action, homeboy Keith Adams on a 62″ ‘Busa beat James Williams on a 60″ ‘Busa. Cleveland Tommy personally manned the tape measure. “That 60″ bike is so weak, it got beat by a bracket bike,” laughed Tommy.

The pot started at 1 and 1/2 stacks on that one, but “Country lost big,” reported Marlon. 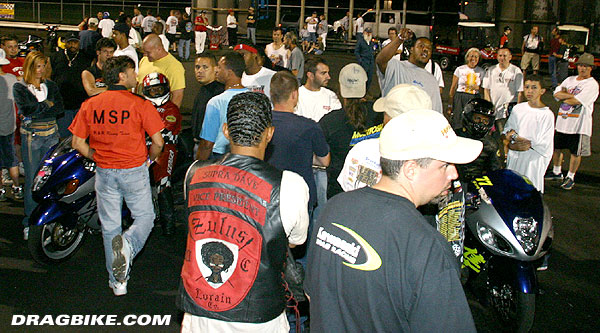 “People don’t know what they’re talkin’ about,” countered Country, indicating he kept his side of the table clear unless Locklear was racing.

Marasco ran an 8.76 on Lulu. “Lulu has two years on that motor,” reported Joe.

It was a tough night for Marasco’s MSP trailer. In all, he and Dennis lost 3 races. 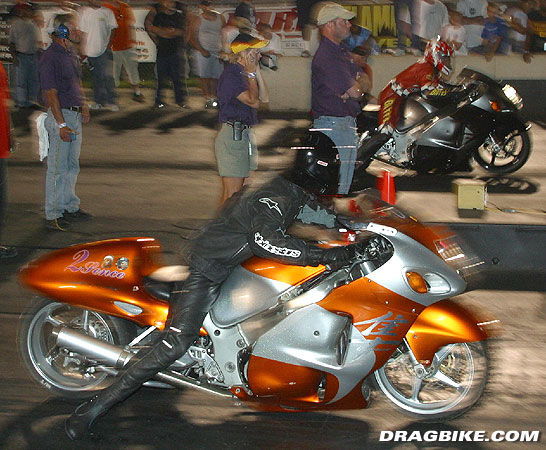 “St. Louis won most of the chips this weekend,” speculated Marlon. Or, the loot went to No Loot, who was still around Sunday morning. North Carolina was long gone.

“If they’d stay and play instead of hittin’ and runnin,’ things would be different,” said Marasco. “They should stick around and play like a big, long poker match instead of playing one hand and leaving.” 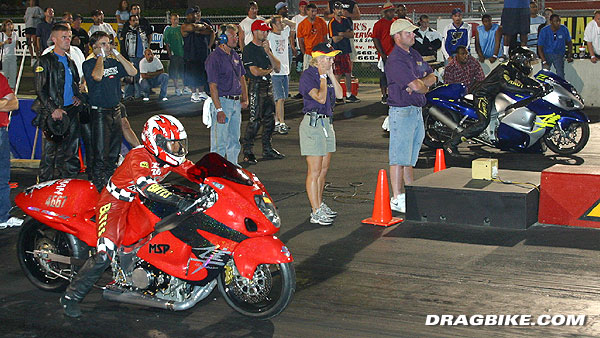 Shine rides Supernant’s MSP-built ‘Busa in Shootout. “The first nitrous ‘Busa in the 7’s,” reported Robert. The bike hit that number the first pass off the trailer at Norwalk.

Keith owned lane choice and the tree against Henson in the quarters of Shootout, but lost when the ‘Busa wheelied at 300 feet. “I got too aggressive on my tune-up,” admitted Marasco.

So Keith turned his attention to Pro Stock. “He’s gonna hafta get a beatin’,” Shine said about final round opponent, and eventual victim, Paul Gast. “I put all that ‘Chaos’ in the third part of my mind and used the rest of it for my reaction.” 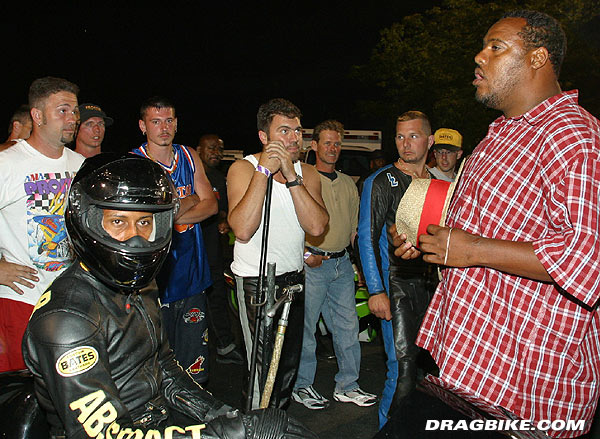 And now his whole mind is focused on Indy. “It’s time for a rematch,” said Shine. “All comers, it don’t matter. Keith Dennis is looking for all takers. I don’t know if North Carolina’s gonna be at Indy. They got beat up pretty bad in Rockingham. You won’t see them talkin’ about their losses on the internet. A true champion talks about his wins and his losses.”