HomeEvent CoverageStacks at the Track : Nations Unite Against MSP

Stacks at the Track : Nations Unite Against MSP

$TACKS at the TRACK

Grudge racing started early at Indy, as a lot of interest was generated over the round 2 qualifying pairing of Keith Dennis and Lee Shierts. Shine’s holeshot nipped Shierts’ .001 quicker pass.

“I won fiti on that,” said C.J. Johnsen, making his first appearance at a Prostar race in ’03. C.J. was bikeless, but an active playa in the IRP pits nonetheless.

Saturday night’s “sanctioned” chaos was shortened due to rain earlier in the day, lengthening the normal Prostar program. So there wasn’t a whole lot of time for tempers to flare and wallets to flash.

In precious little action, Cleveland’s Kevin Adams on his Busa beat another guy named Adams from Illinois on a ZX-12R. It was a small deal on somewhat of a small deal night-about 3/10ths of a stack.

Johnny Locklear, on a part black, part blue and silver Busa, took on the burnt orange No Loot bike from St. Louis for 2 and a half stacks. Johnny gave No Loot the hit and won anyway. 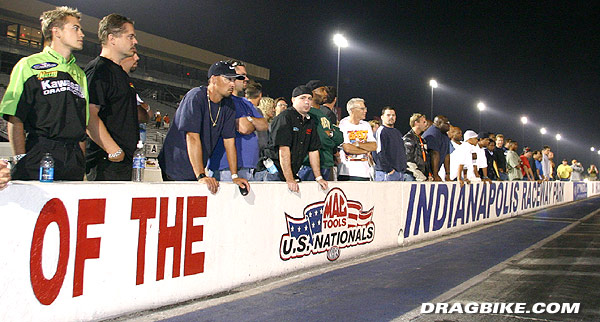 In a race of great local interest, Indy’s Mark Gardner took on a guy from Greenwood called Lil Kenny. Gardner runs Fastlane Cycles, used to be with Joe Marasco’s MSP, and before that was with Flat Out Racing. Mark’s black Busa with white wheels runs one of Marasco’s motor combinations with a Brock Davidson clutch cushion. “The bike flies,” said Gardner. “I weigh like 200 pounds in my leathers and the bike goes 8.90’s at 160.” 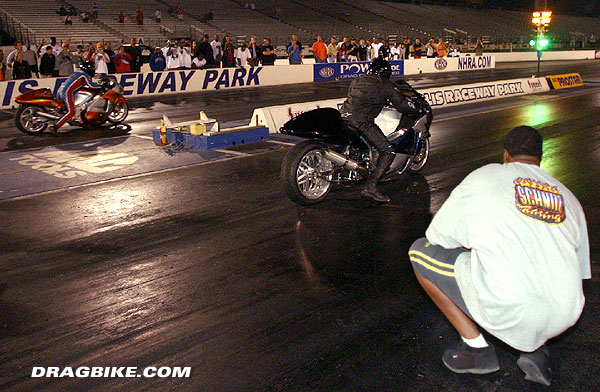 Lil’ Kenny, on a blue Busa, had called Gardner out a few weeks previous. “We were in Broad Ripple and he wanted to race on the street,” said Gardner. “Right now the bikes are just flyin’ and it’s not safe. So Friday we were testing at the track and he didn’t say nothing. Saturday he was there and didn’t say anything again. I guess he and Dustin (Clark) lined up Saturday night and he beat Dustin. So he was all froggy and said ‘C’mon, we gonna race?’ Which kinda pissed me off ’cause I didn’t even have Nutec in the bike, I had V16 and the bike’s not mapped for that. I ride my bike around on pump gas, and he weighs about 135 and trucks his bike around. But this kid thinks he’s Shine or something, like he’s on a pedestal or something and he hasn’t even beaten anybody yet. I was tired of hearing about him.”

So he beat him. “Now I don’t have to hear about him anymore.”

Shine made shakedown runs on Lulu II and Lucille, a root beer colored Busa named that Marasco bought a few weeks before at a junkyard in Tampa. Near the end of the night, Locklear rolled back up and Shine came up alongside on Lulu. Finally, a real race was gonna happen. Or was it? Lulu wouldn’t start. The bike was pushed back to the trailer for a replacement, but the track was shutting down.

“Half a million dollar operation and they don’t have a battery,” Locklear said outside of the MSP trailer early on Sunday. “A man can’t make 12 volts, he can’t go fast.”

“I don’t think they wanted it to crank,” said Burnout Bruce. “Tell’em to be in Alabama. North Carolina’s gonna take on the world.”

At this point on Sunday, no one was sure that any grudge racing would take place. The world might have to wait ’til Alabama to see what would happen next. Marasco and Dennis were qualified #1 in Pro Stock and here they were, attempting to straddle the two cultures they’re trying to live in right now.

Talk turned to Lucille, who was sporting the new MSP competition exhaust system. “We got it in the shop on Tuesday. I’m having them made in Japan. We’ll go head-to-head with any exhaust maker,” Joe said, nodding over to Brock’s trailer. “ANY exhaust maker. We’d like to have a shootout.”

“Bring it on,” said Davidson, so look for this streetbike pipe showdown sometime soon.

In a little sideline action, the crowd was convinced that Lucille was sporting a slider. Voices were raised and Burnout bet Shine half a stack on it. Keith started the bike, released the clutch and it promptly died. “I know it looked like a slider,” Bruce said sheepishly as he handed over the wad.

“I look so good, you thought I had a slider,” Shine grinned at Bruce as he squeezed his hand in the air. “You said I couldn’t ride a hand clutch!”

“We had 3 Busas for Hollywood’s 1 Busa and he wouldn’t race,” Joe said, getting back to the matter at hand. “The North Carolina boys were scared to death. They brought nothing with a street tire. That thing under that cover’ll beat anything from North Carolina. Tell Johnny he’d better go back to his kitchen table.” 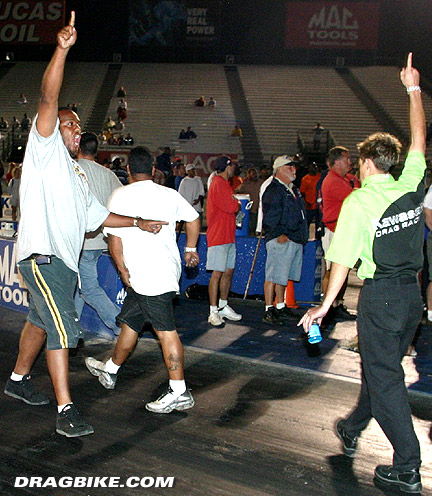 The Tar Heels didn’t bring a bike cause they had Locklear on the black Busa, brought up by some guys from Texas. “I call them the Texicans,” said Johnny. “I didn’t have any intentions of coming here, really. It was a last minute thing.”

“You ain’t got enough money to stay around for three races!” shouted Marasco.

“Put your money back in your pocket!” snapped Shine. “You ain’t got nothing but (3 stacks)!” Dennis questioned Hollywood’s involvement in this whole deal, as a non-rider and a non-builder.

“I don’t need no leather suit,” replied Hollywood. “I got MONEY!”

“We’re here to race motorcycles,” said Marasco. “We don’t care how much money you’ve got!”

“Last night you didn’t wanna bet!” countered Hollywood. “Who else has run you all but the Carolina Boys? You bluffed everybody else but you can’t bluff us!”

“We’ll take anything you got with all motor and a street tire,” said Shine. “You gonna do it? Or you gonna run your mouth? You’re gonna have a heart attack! It’s gettin’ hot out here, you’re getting’ red! And we don’t race for shit that starts with an ‘H.'”

“Let’s do three 10’s,” said Hollywood, who seemed to have found just the level of interest to get the deal he was interested in. He didn’t end up with 3, but he did get 2.

The Red Bike was formerly known as Herman, owned by Robert Supernant. Now it was out from under the tarp, sporting a new, painted carbon-fiber tail and being poured over by the MSP staff. Marasco, meanwhile, had a Pro Stock race to tune for. 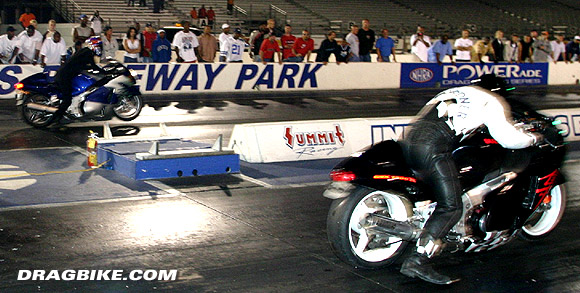 “You all need some help?” the Texican asked sarcastically.

“I put my (frequent forum contributer Boxell’s first name) all in Lulu,” the Texican said to me with a heavy lided gaze.
“What’s your name?” I asked the Texican.

“Pound for pound, inch for inch, we’re the fastest all-motor bikes in the world!” said Hollywood.

“How long is your bike?” I asked Blondie.

“66 inches. It’s not a Shootout bike,” he said, nodding over at The Red Bike.

The North Carolina krew gets a kick out of comparing Locklear’s kitchen table to the MSP trailer. The Texicans provided an even stronger contrast.
“Where did you build your bike?” Hollywood asked Blondie.

“In the dirt on the ground,” said Blondie, who lives in Caroline, Texas.

“We want our bikes brought to the track comfortable,” said Dennis. All around the pits, folks were wearing bright T-shirts that read “Keith Dennis: King of the Street.”

Privately, Hollywood was a little concerned. “This ain’t gonna be easy,” he said. “We knew Lulu would be easy.”

In the red camp, Pops Luzador was also concerned. “This one’s gonna break the bank,” he said.

Dustin Clark, usually shirtless and known as Naked Boy, was wearing a T-shirt that read “Vagina: a box a penis comes in.” Dustin could be considered to be Brock Davidson’s factory rider, and was famously paid contingency by Davidson after winning a grudge match at a Prostar race last season. “There’s a lot of Brock pipes here in town now,” Dustin said about the Indianapolis streets, such as 71st Street and Park 100 West.

Clark had some subtle opinions about the MSP slump. “Their shit ain’t fast enough. They don’t go over shit close enough. You know Shine. He’s like ‘I’m Shine!’ It’s a Shine thing. He can get on almost anything and make it run good.”

True enough. Shine and Marasco were racing 3 streetbikes, Pro Stock, and Shootout. Their Shootout Busa runner-upped to Rickey Gadson that day. The boys in black and red were spreading themselves thin while North Carolina and the Texicans kept MSP firmly in their sites. “You tell me another guy who can go through all that and maintain his composure,” said Dennis. “Tell them to come out on a Pro Stock.” 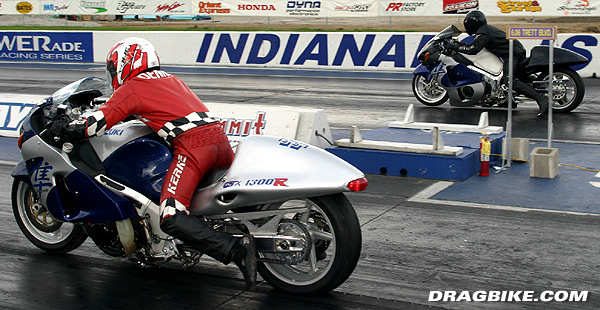 The crowd moved back to the starting line, but was teased by another battery failure on The Red Bike. The race went off later in the day, but Shine was off the throttle on The Red Bike at half-track. “The battery touched the body and shortened the whole motorcycle out,” reported Dennis. “Carbon fiber conducts electricity. It burned a hole right through the body. But that’s drag racing.”

Shine and MSP’s day finished on a positive note, as Shine rode Lucille past Jason on the No Loot bike. “You have to lose a couple,” said Dennis. “I beat Johnny and he laid low for a whole year. I got them on the phone and tried to get them to come up to Atco and they didn’t wanna race. They said ‘Wait ’til Montgomery’ (Dennis and Marasco are skipping Atco to race at the rain delayed U.S. Nationals at IRP). MSP aren’t quitters. If it’s the Lord’s will, we’ll be in Montgomery in full force. We’ll take all comers!! We can be the first two on the dragstrip!” 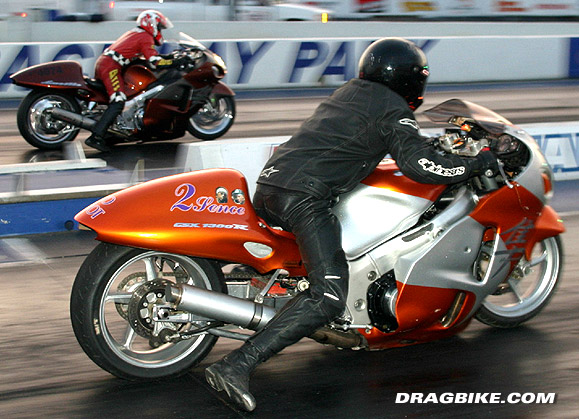