Erica Enders and Karen Stoffer survived down periods and are right in the thick of championship battles. 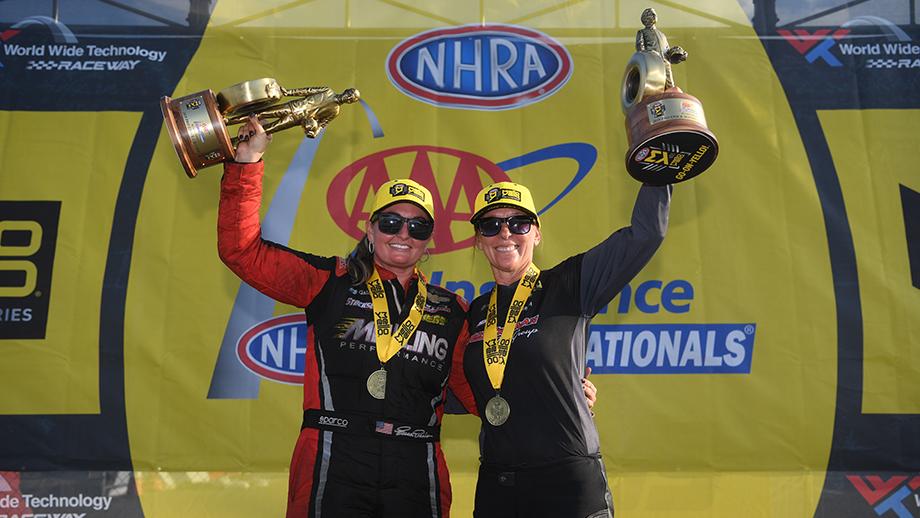 The image spoke for itself. Erica Enders and Karen Stoffer stood arm in arm in the winner’s circle at World Wide Technology Raceway, replicating an iconic drag racing moment. Stoffer and Enders combined for the 148th and 149th wins for women in the National Hot Rod Association more than 15 years after the pair won in Pro Stock Motorcycle and Super Gas in Houston. The designation of “wins for women” implies every person with multiple-x chromosomes plays for the same team, or that they compete against a common enemy.

No narrative is that neat, and while the marketing aspect of the impending 150th win looms large, it belies how much work it took for wins 148 and 149 to come together. Stoffer won for the first time since 2015, which, coincidentally, lines up with the last season Enders drove a car that matched her otherworldly talents.

Both racers can make a claim as the most naturally gifted in their respective categories, but neither have been blessed with cooperative equipment in the second half of this decade. That might still be the case in 2019; both left St. Louis in second place with legitimate title hopes. It certainly feels different now if only because winning, like aspirin, acts as a temporary cure-all.

But both Enders’ Melling Performance Elite Motorsports Chevy Camaro and Stoffer’s Ray Skillman White Alligator Racing Suzuki serve as reminders that equipment is paramount in motorsports. It’s an axiom everyone says they understand until Hall of Fame racers fade into obscurity on teams that don’t have the power to qualify in the top half of the field. 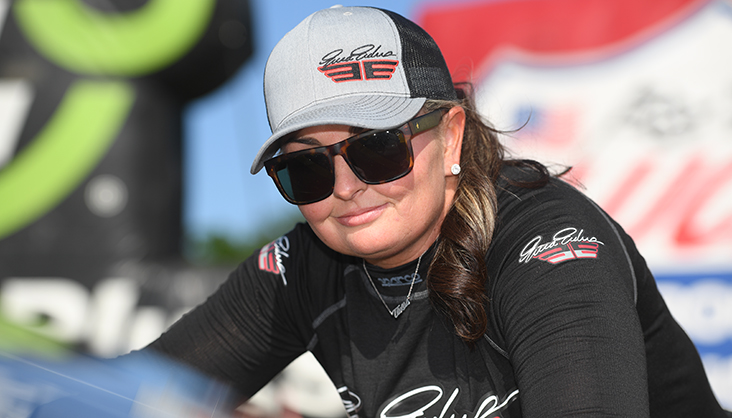 Enders won her second of back-to-back championships in 2015 and led Pro Stock with six pole positions. She has qualified No. 1 three times since the start of the 2016 season. Two of those pole positions opened the 2019 NHRA Countdown to the Championship, making her a contender for a title for the first time since the Texan looked primed to take over the class in the middle of the now-dying decade.

“We’ve still got our work cut out for us over the last four races,” said Enders. “It’s constantly on my mind — I even dream about it at night.”

A lot happened after Enders won in 2015. The category moved to electronic fuel injection in 2016, and Elite Motorsports moved from Chevrolet Camaros to Dodge Darts. The team didn’t exactly dominate in either of its title-winning years (Pro Stock rival K.B. Racing had the fastest car on average in 2015), but few expected the learning curve to be so steep when Elite changed manufacturers.

Enders went from the top of the qualifying sheets to an also-ran. The race-day luck that can sneak Wallys into back pockets in nitro categories rarely occurs in Pro Stock. That brutal difficulty is part of the romance and what leads many racers to bitterly divorce the most exacting Professional category in the sport.

Going from the fourth-quickest car to eighth-quickest sounds like a minor step backward at first blush. It took Enders from a car with quicker-than-average elapsed times to one that came in below average for the first time since moving to Elite Motorsports. That continued in 2017, despite the team’s move back to Chevy.

She won a race in 2017, ending a year-long drought, by using a pair of holeshots to reach the final round in Epping. That earned her a matchup with Tanner Gray, whom she beat with horsepower (and off the starting line by .004-second). She averaged a .016-second reaction time, dipping below her career average (a staggering .027-second) to declare herself back after one of the most difficult years of her career.

But she wasn’t back. At least, not in the way she nor Elite Motorsports expect to run every time they show up to the dragstrip. Enders won only once in 2018 and was not a factor in the championship hunt. It took more than a year to get back to the winner’s circle in 2019, though she was runner-up three times. 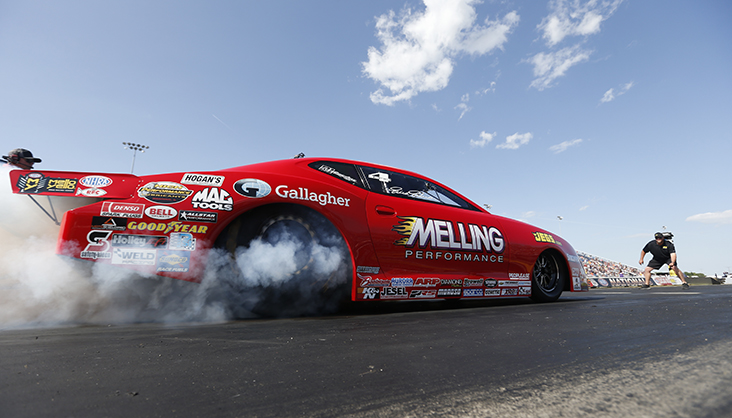 “When you go through those valleys, you’re always secretly wondering if that win is going to come again,” said Enders. “We first knew we were on to something back in Seattle, but it was really in Brainerd that we felt like we had our confidence and our swagger back. We feel like we have a car that is capable of winning a championship right now.”

Great racers elicit the kind of response Enders did when she won in 2017. You declare them back as early as possible because you want them to be back. 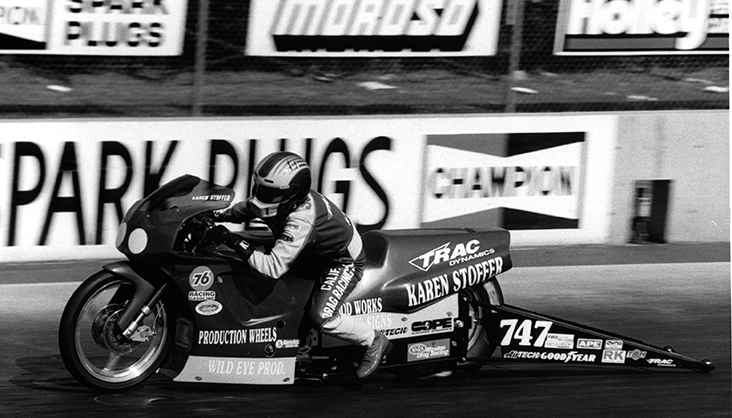 Stoffer began her career in her early 30s with a rented motor from legendary racer Dave Schultz in 1996. What began as a one-off in Denver turned into an iconic drag racing moment as three women, Stoffer, Angelle Sampey, and Stephanie Reaves, all made their debuts a mile above sea level.

“We basically converted a Pro Mod bike, and it passed tech and everything, but this was not a true Pro Stock bike,” said Stoffer. “We just put their engine in a Pro Stock bike and were greener than green. It was Gary [Stoffer, her husband] and I, and we just went out there and tried it because I had my license. We didn’t do very well, didn’t qualify for either race, but that was part of it.”

She didn’t return to Pro Stock Motorcycle until 2002, where she competed in four races and reached a final. Stoffer began making full-season pulls following that and earned her first victory in 2004 by defeating Antron Brown in Houston, joining an up-and-coming racer named Erica Enders, who had just secured her first national event win in Super Gas. Stoffer earned wins in each of the next four seasons and climbed up the standings, reaching a high-water mark of fifth in 2012. 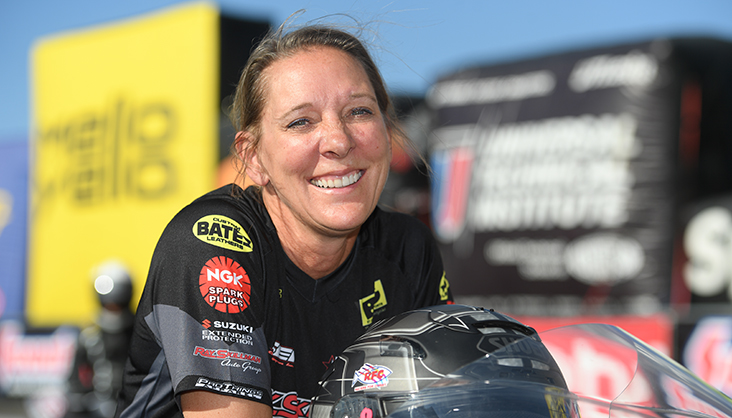 That season came without a victory on the seventh-quickest bike in the category, a story that has become familiar throughout Stoffer’s career. She averaged a .039-second reaction time, which was better than the class average, but not in the otherworldly place she has taken up residence in the past three seasons.

Then Stoffer took a step back, competing in only two events in 2013 and not at all in 2014. Not because of her lack of talent but because funding remains difficult to acquire regardless of finishing order.

Stoffer pondered retirement following her two-race stint in 2013. It was only at the behest of Greg Underdahl that Karen and Gary Stoffer returned at the beginning of the 2015 season with the newly formed Stoffer-Underdahl team in tow. If they won some money, they’d keep riding.

Karen won the season opener in Gainesville. The team kept riding. She didn’t plan on competing in the Countdown, regardless of performance, but her win in Norwalk combined with 20 years of goodwill got a pair of sponsors on her bike. Ray Skillman and Big St. Charles, both of whom are on her all-black Suzuki today, got her to the finish line. 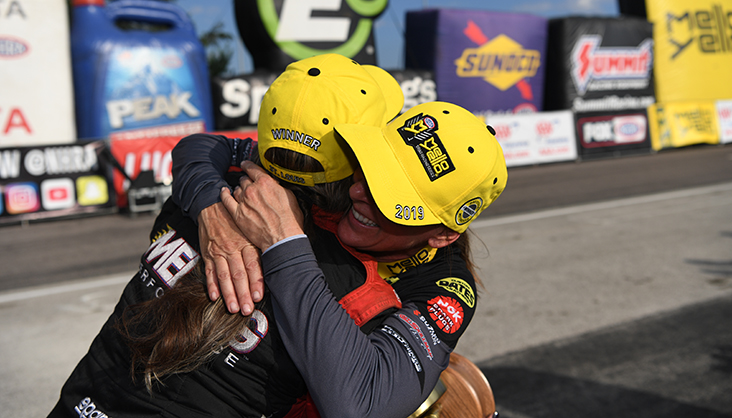 Not many racers get the reception Stoffer received when she walked into the media center on Sunday evening, an hour after hoisting a Wally for the first time in more than four years. The room was filled with photographers, public relations representatives, and, yes, credentialed journalists. Stoffer walked in the room to thunderous applause from a group of people who knew what the win meant to Stoffer and what the rider means to the sport.

“I guess that’s what happens when you don’t win one for a while,” Stoffer quipped.

She might not have to worry about another long drought as long as she’s riding the White Alligator Racing Suzuki tuned by Tim Kulungian. Stoffer is riding the seventh-quickest bike over the balance of the season paired with a best-in-sport .023-second average reaction time. Kulungian has dialed in the two Suzukis under his care over the last six races, tuning them to No. 1 and No. 5 in average elapsed time. 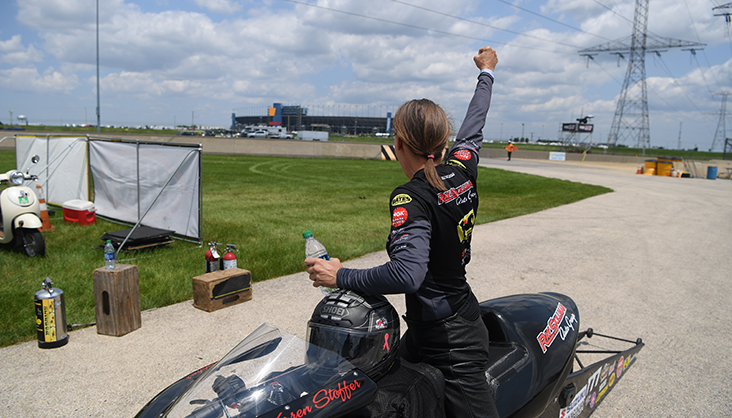 Stoffer has not slowed down on the Christmas Tree. She reminded everyone what she is capable of at the Route 66 NHRA Nationals in Chicago by averaging a .0045 reaction time in a runner-up performance. That may not be typical, but it also doesn’t have to be if equipment performs the way it should.

“I try to stay consistent no matter what,” said Stoffer. “That’s what I try to give my tuners, no matter who it is, whether it’s Tim or Gary or anyone else. I think that’s the value that I can bring to the team.”

Her ability to remain cool, regardless of the number of dollar bills fed into her machinery, makes her well-suited for a sport designed to frustrate. That California-cool vibe is the furthest thing from a put-on as anyone who has spent more than 15 minutes around the Panorama City-born rider can attest. 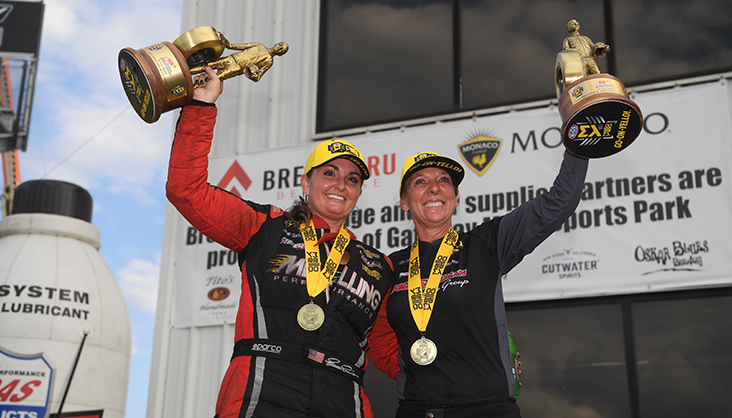 Enders is back. That’s true to the extent she ever left. She has led Pro Stock in reaction-time average every season, except for 2018, and she was runner-up by .016-second. Only teammate Jeg Coughlin Jr. comes close to Enders when it comes to letting the clutch out, and she is leaving the starting line .021-second earlier than the average Pro Stock contestant in 2019.

“I work extremely hard to be as consistent as I possibly can, regardless of car performance. I feel like that’s crucial,” said Enders. “Even in the challenging years, like in 2016. I wouldn’t call 2017 and 2018 challenging necessarily, but those years will make you a better driver because you pull up to the starting line knowing that you need to be at your best to turn on win lights.”

That matters. So does the performance of her Melling Performance Chevy Camaro, which is showing signs of life after hours of hard work by crew chiefs Rick and Rickie Jones. Her Camaro is tied for the third-quickest Pro Stock machine among full-time competitors at 6.584-second; that may be all she needs from her team to turn on win lights.

Coincidence brought Enders and Stoffer together in 2004, and it did so again under the shadow of the Gateway Arch in the second race of the playoffs. It can be more than that because of what they represent, not just to women but to aspiring racers who should want to emulate their ability and resilience.

The two women share incredible talent, but in a team sport, that can only take you so far. With four races remaining and world championships on their minds, both Enders and Stoffer have the ability and the equipment to dream for more.