The St. Louis NHDRO race was very hot and that usually means slippery but by Sunday there was record-setting traction. We finally got a hold of the methanol motor with the higher compression JE Pistons, Milleniums cylinder prep, Microblues coatings, and new Billet compressor wheel from Andy at Great Lakes RaceCraft. We went record bests to the 330 and 1/8th mile but the mph had still not improved as we think it should. We qualified fourth and were marching through eliminations when unfortunately we broke a crank, ending our race weekend prematurely. Steve Nichols from Dyno Dynamics was in St. Louis to help us with the new Back to The Future Grudge bike with all new Airtech Bodywork and designed by Steve at Xtreme Graphics. We’ve shown the best numbers to date for that bike also with the Weapon X Coils now lighting the fire. Well, not shown. Your not supposed to let your ET be shown on the scoreboard. That’s the whole intrigue of grudge racing. The fans only see the win light but can’t see how damn fast these no rules Grudge bikes are going. Let’s just say close to record-setting, but not there yet. Now off to KOTS! 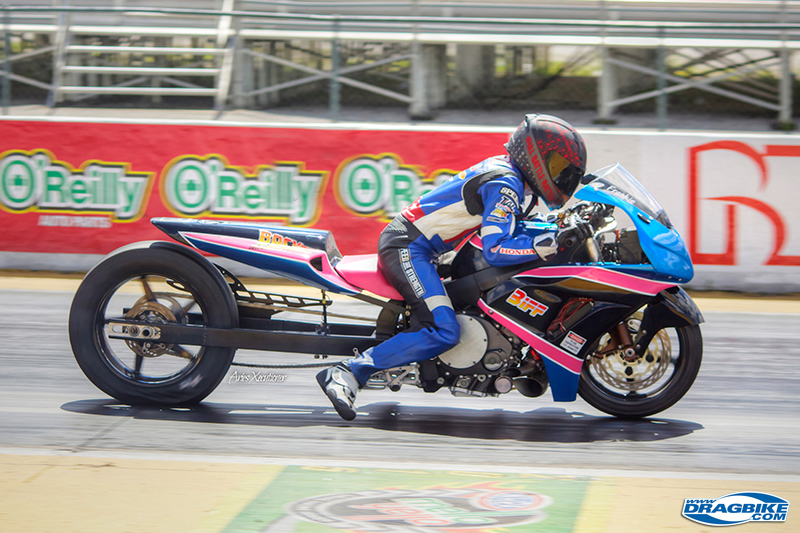 KOTS or King Of The Street is a No Prep Grudge race. No prep is the fastest growing segment of Drag Racing. Normally our NHDRO tracks are prepped by spaying glue and then dragging rubber to make the best traction possible. The idea behind No Prep is to simulate actual street conditions. This necessitates a very different way of setting the bike up. The Extreme Class we entered allowed us to put a slick on the bike. The only rule in Grudge racing is no wheelie bar and don’t show your times.

We tested Friday night and things went well. Saturday morning the track crew was not going to scrape the track as they had done in years past. They did not glue and drag the track (prep) but the traction from Friday nights testing would only get better now. This is great for traction but we were counting on the usually slick scraped track which you can’t apply a lot of horsepower. When we broke the crank the week before, Kurt from Sikora Precision fixed the clutch damage and we had a new Falicon crank, but could not fix the valves that bent as a result. We put a bone stock CBR1000rr head on it and I am sure we were down on horsepower. We marched through eliminations again and went to the final. The 12,000 fans in attendance and over 140,000 views were expecting the David (Frankie’s little cbr1000) and Goliath (Rudy’s big bad busa) show. It was Biblical. And just as the story goes we David (Frankie) slew Goliath (Rudy) with Frankie controlling a wheelie all the way to the finish line. I had put too much boost in trying to compensate for the (supposedly less hp) stock head. 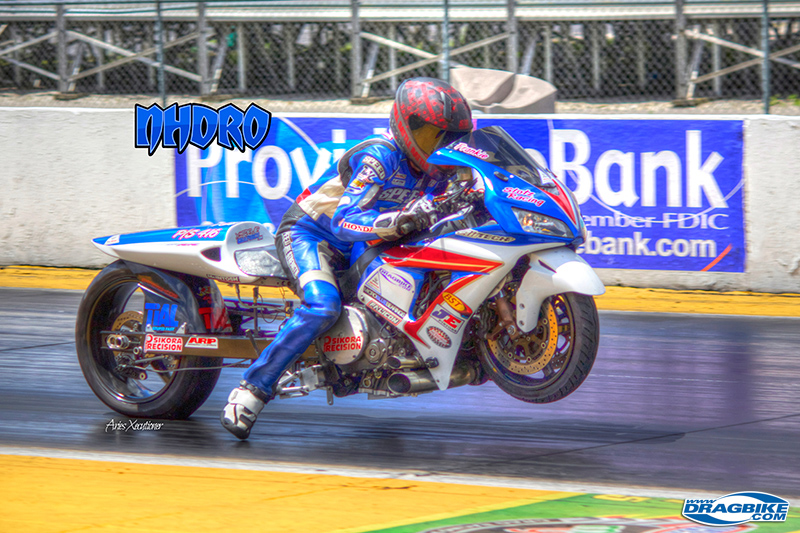 We are looking forward to the July 8-10 NHDRO event in Louisville, KY. It is an 1/8th mile race. Hope to see you there.