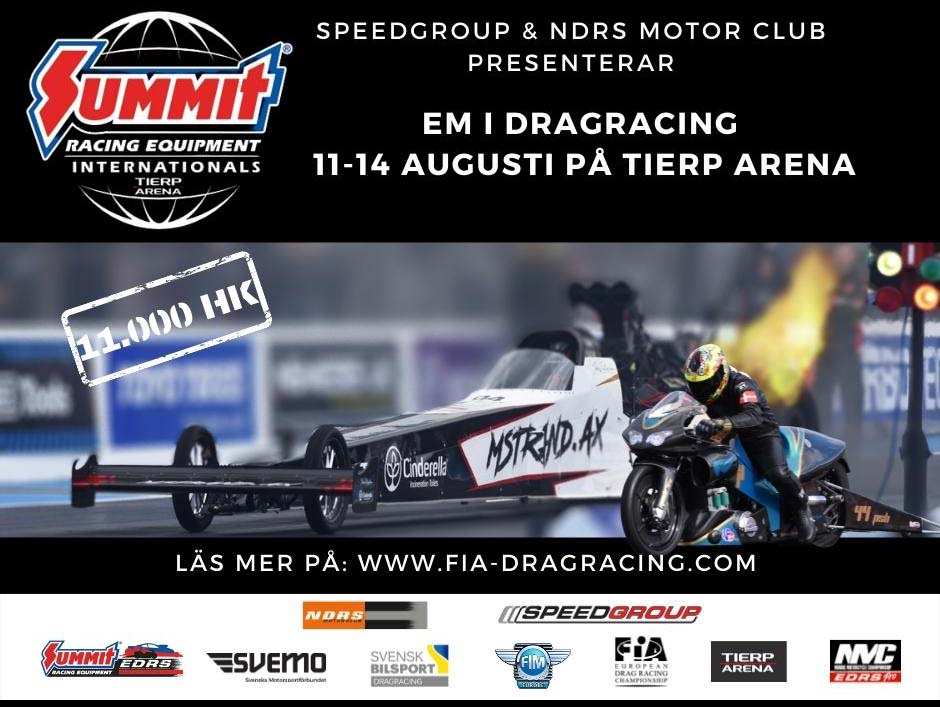 Sunday and eliminations day marked the culmination of the second stop and halfway point in the 2022 championships with rounds in Germany and England to come in the next month. Before we get ahead of ourselves we’d better focus on today’s happenings in a continuing warm and sunny Sweden.

Top Fuel Bike had some great racing with a step up in performance in the opening round of eliminations as both Rikard Gustafsson (5.9335/248.91) and Sverre Dahl (5.9261/237.01 to defeat Jaska Salakari) demonstrated they had got a handle on the track ahead of their semi-final. On the other side of the ladder Jan Sturla Hegre (in getting past Thomas Pettersson) and Rene van den Berg (on a bye when Mikko Rajaniemi was a no show) were both solidly in the 6.1s ahead of their head-to-head in the final four.

Hegre slipped back a bit in the heat of the sun and a 6.3 was enough to take a spot in the final when van den Berg was shut off before staging. Hegre’s opponent would be fellow Norwegian Dahl who took a beautiful side-by-side 6.0217/235.30 to a 6.0363/245.81 from a hard charging Gustafsson. The final again saw a slight nudge back in performance as the heat was really building into the track, but Dahl and the Sunshine Express (if ever there was a weekend when a team carrying that moniker was destined for success) Yamaha strode to a 6.220 v 6.366 victory lap. 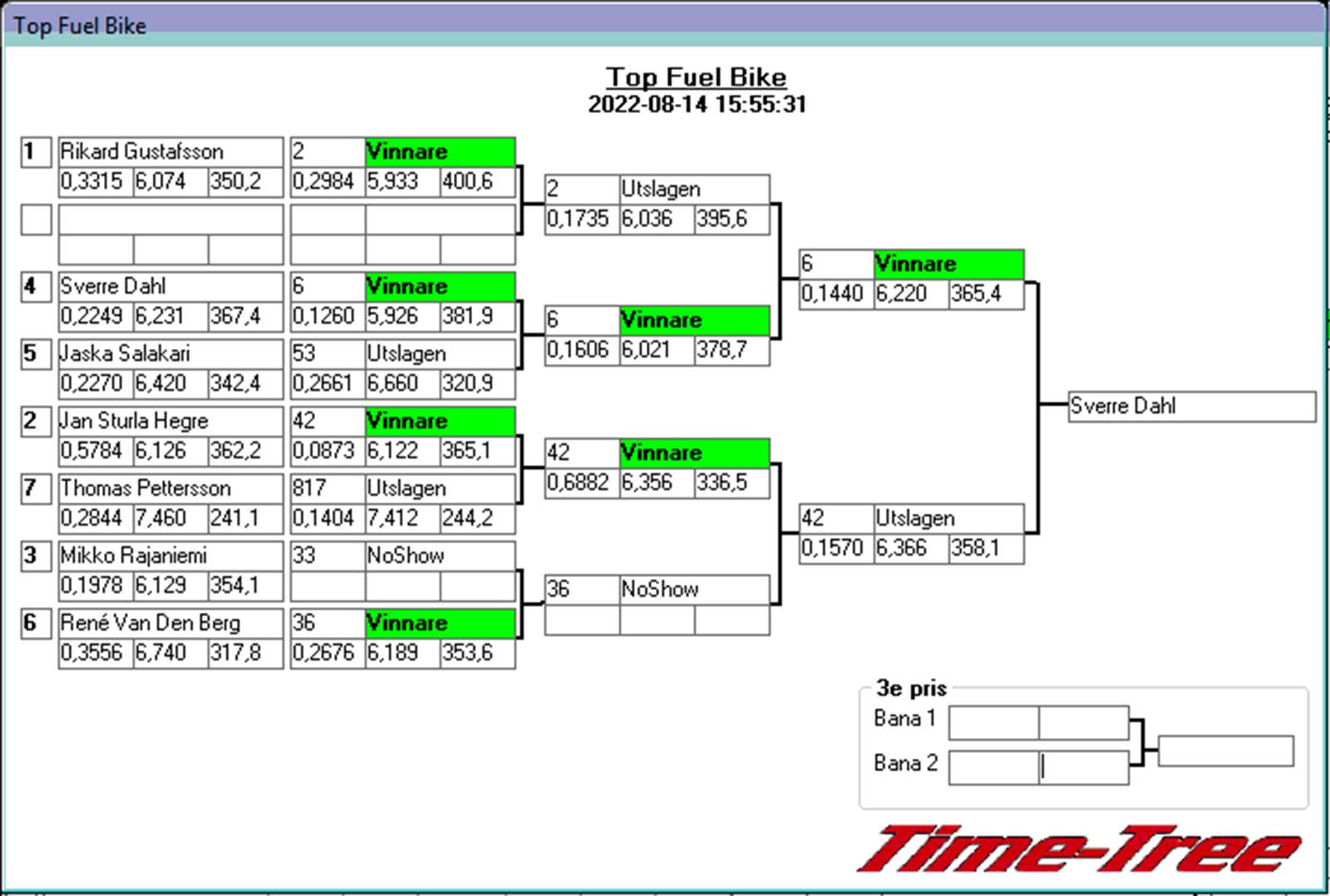 The Super Twin eliminations was littered with upsets mainly surrounding Julie Wagner as the Norwegian class rookie took out Per Bengtsson on a huge holeshot (0.0231s RT) to earn a freebie into her first final when a definite trophy contender Ismo Mäenpää scuffed up a cylinder head in his opening round of eliminations.

On the top side of the ladder things were a bit more straight forward as Marcus Christiansen used a pair of 6.5s to get his spot in the final alongside Wagner (with a 6.5 to a 6.7 from Greger Johansson being the best race of the semi-finals).

Wagner struggled at the startline and was no match for Christiansen’s 0.0991s RT and a 6.7 early shut-off to put the Dane back in the championship hunt. “We’re really happy to come back with this performance after the [catastrophic engine failure] Main Event and we’ve got more to come as I was shutting off early on each pass today to save the brakes”. 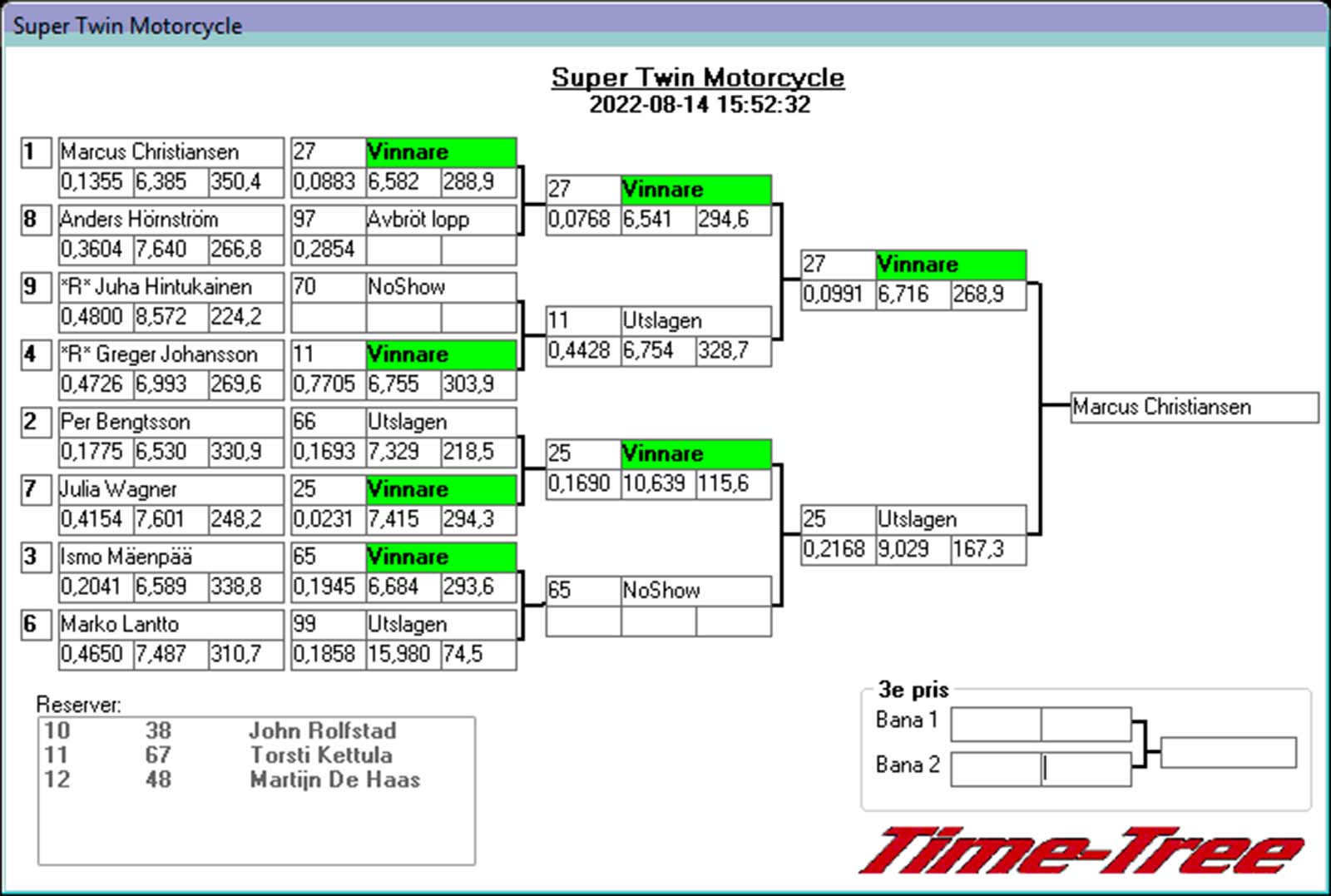 Kalle Lyrén and Martin Newbury (one and two in qualifying) were seemingly making their way through to the final in Pro Stock Bike with a degree of comfort.

However, in the semi-finals both bikes spat oil smoke out at about half track indicating something wasn’t quite right and the resultant pair of snapped crankshafts prevented either from making an event trophy run. 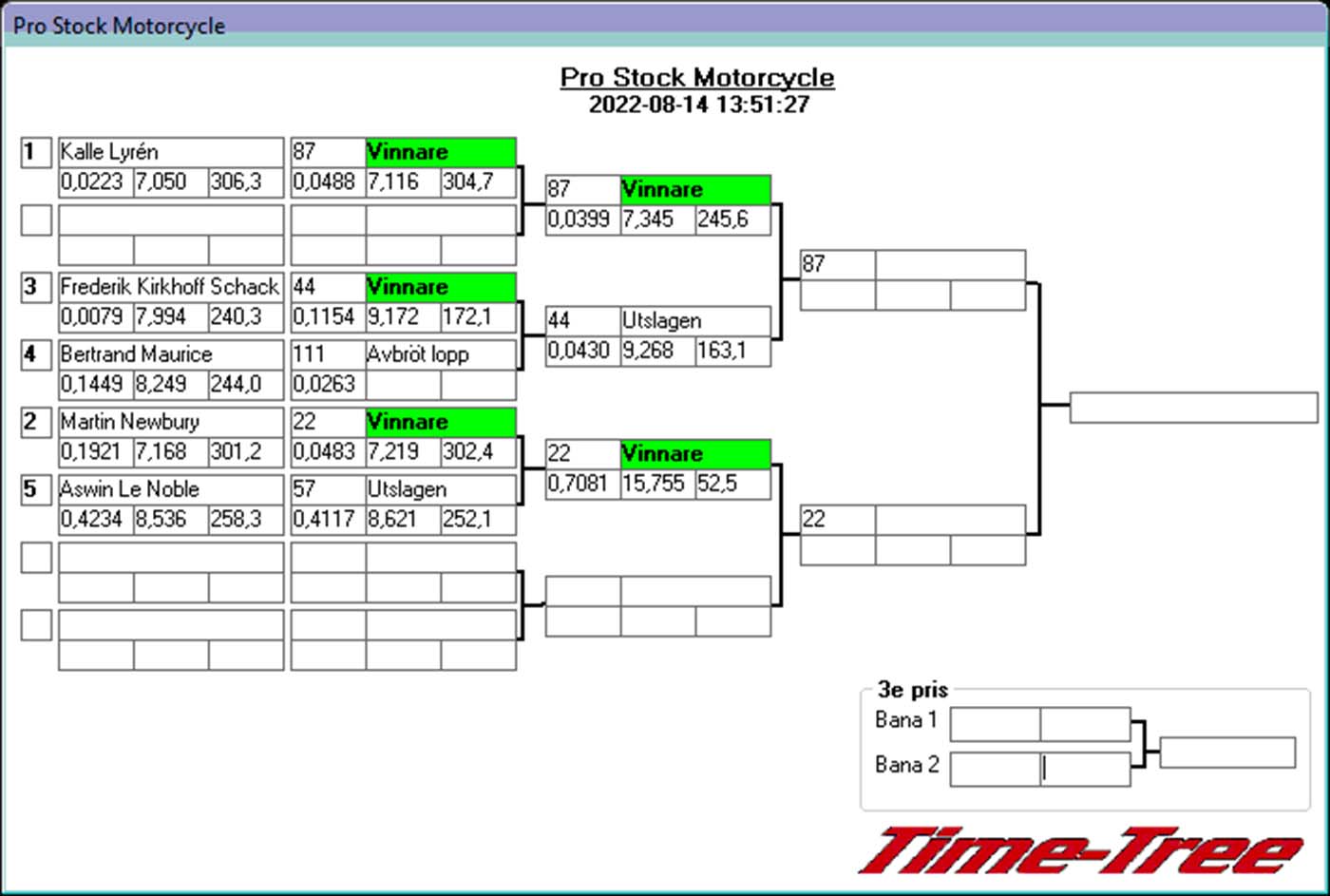 The qualifying (and indeed pre-event) form book got lobbed out of the window in Super Street Bike, most notably when points leader and low qualifier Dániel Donát Lencsés span heavily off the startline to gift a first FIM-E eliminations round win to Kenneth Laget. Mathias Bohlin then assumed favourite’s role for the event and the number two qualifier duly lowered his PB to a 6.806/218 in the opening round of eliminations and then improved further with a great 6.7858/219.73 in the semis to take out Vesa Ruhanen.

Bohlin’s final round opponent would be Mogens Lund who used a 7.0 and then a 6.9887/212.36 to book his spot in the final. With a couple of tenths difference in ET, Lund really had to take a shot at the tree and a 0.0123s RT coupled with a 6.956/215.50 kept the Turbo DK bike ahead of Bohlin’s hard charging 6.8819/217.46. “I really had to take a shot at the tree as I’ve been struggling with head gaskets, turbo seals, you name it since the opening round in May, but I’m very happy to be back here” beamed Lund to make a very happy pair of Danes at the conclusion of the Summit Racing Internationals. 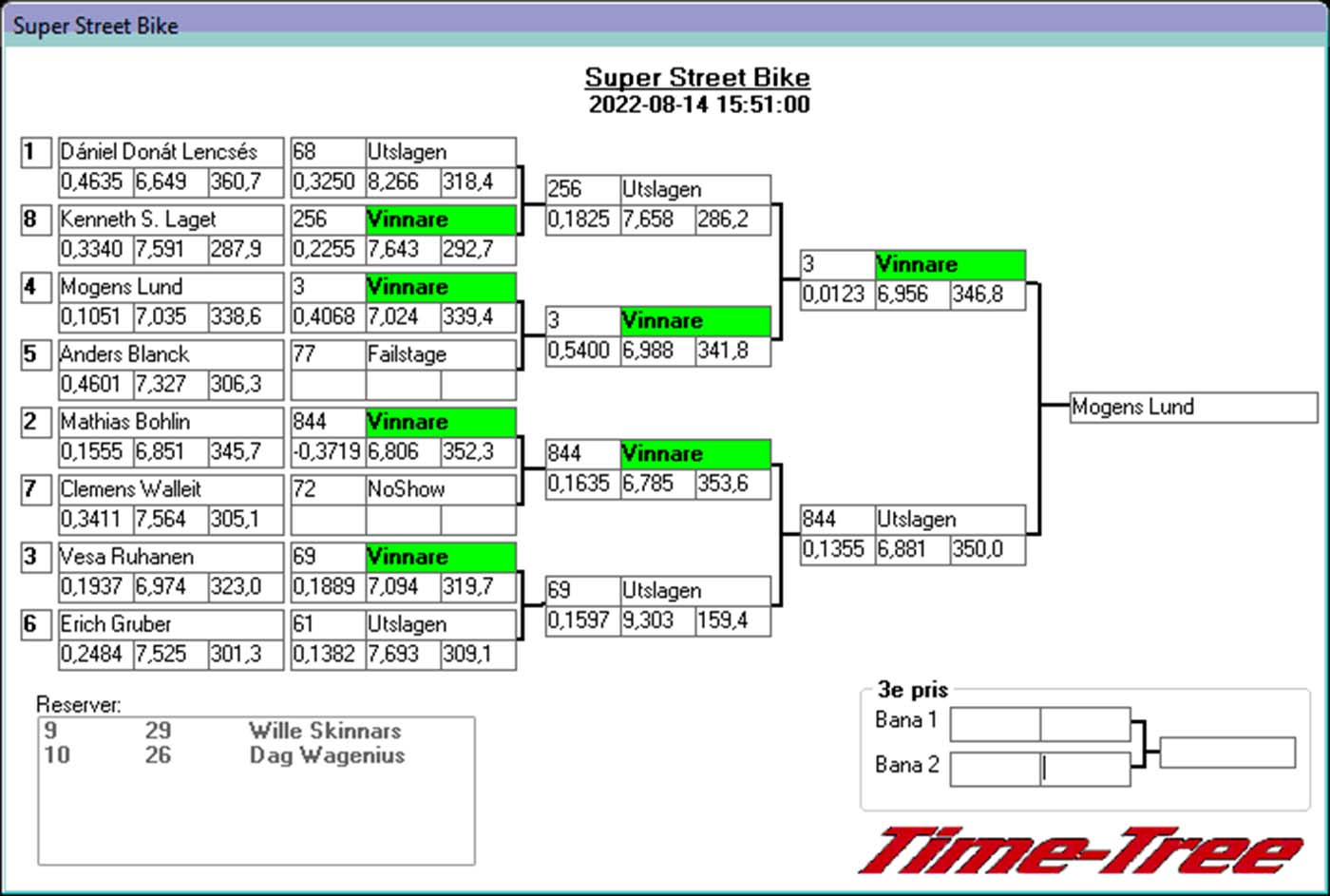 If yesterday was warm, today was a tad hot with three rounds of qualifying for the FIM-E teams to work their way through and quite a bit of shuffling of the pack in three of the four classes.

Rikard Gustafsson improved to take over top spot with a 6.074/217 on a still very tricky track. Jan Sturla Hegre remains at 2 with his best run (6.1268/225mph) from yesterday, but Finnish rookie Mikko Rajaniemi (near lane) pulled out a new PB at 6.1294/220 which we think is the best numbers ever from the heavily reconfigured former Norbert Kutzera & Kai Selkämaa steed, well done Sirpa!

The veterans Jaska Salakari (near lane) and Sverre Dahl (far) also improved with the latter picking up 4th spot on the ladder with a 6.2311/228 against Salakari’s 6.4204/212 for 5th which will mean a head to head in the opening round of eliminations. Gustafsson will have a bye while Hegre will match up with the sole funnybike of Thomas Pettersson (a mid-seven being someway off the Swede’s best) and Rajaniemi will lock horns with Rene van den Berg who is suffering a series of mechanical woes over the course of the weekend.

Marcus Christiansen improved to a 6.3858/217.74 to keep ahead of the rest in Super Twin while behind him Ismo Mäenpää (6.5896/210) and Per Bengtsson (6.5306) swapped places into 3rd and 2nd respectively. Greger Johansson nipped into the sixes with a 6.9935 to round out the top half of the field, with Samu Kemppainen, Marko Lantto, Julia Wagner (the only female competitor in the FIM-E classes this weekend) and Anders Hornstrom rounding out the eight bike field.

Kalle Lyrén continued to lead the way in PSB with the Parts Europe Suzuki producing a consistent series of 7.0s improving with a 7.0506/190, while Martin Newbury dipped into the 7.1s on the tricky track for second spot.

An all run ladder should see Frederik Schack (most improved today with a 7.9), Bertrand Maurice and Aswin Le Noble rounding out the ladder.

We were anticipating improvements in Super Street Bike today and Mathias Bohlin did just that to a 6.8513 (new PB) but this looked a bit like standing still in comparison with Dániel Donát Lencsés’s very clean 6.6497/224.14 for a leg up on a new FIM-E class record, which, needless to say, put the Hungarian on pole for what should be an eight bike ladder tomorrow.

A warm day at what was proving to be a tricky track for the opening day of FIM-E qualifying at the Summit Racing Internationals saw some solid if not record breaking runs as the racing collective came to terms with a surface that was causing some headaches beyond the 60 foot mark. A brief daily synopsis (as for some reason the qualifying sheets have vanished from their usual place, hopefully they will reappear before too long!) follows.

The Norwegian Uggerud Bros Puma propelled Jan Sturla Hegre into the provisional number one spot with a 6.1268/225mph with the bike showing a degree of predictability in responding to adjustments that has Hegre optimistic about improving on the numbers tomorrow.

In second spot is Rikard Gustafsson with a 6.2171/201 that has plenty of room for improvement and the team were working on the drivetrain as we left the track. Of the rest, Rene van den Berg sustained some damage on a 6.7, Jaska Salakari was very happy after an incident free 6.7 for fourth spot and looking to gradually pick things up over the rest of the weekend. Mikko Rajaniemi and Thomas Pettersson will be looking to improve on a pair of eight second passes and in seventh Sverre Dahl is looking for a Yamaha cam sprocket after disassembling one off the startline on an ailing roll through.

Bouncing back after a bang and a DNQ at the opening round of the series, Marcus Christiansen eased to the top of the Super Twin charts with a smooth 6.4907 at only 183 mph in the second session.

Ismo Mäenpää rocked into second spot with a 6.6597/207 best carrying over consistency from last weekend in Norway.

Per Bengtsson and the Beast parallel twin dropped into third spot as the only other six second runner with a 6.7 while current points leader Martijn de Haas is on the outside looking in while also hoping to fix a torched head that could put the Dutch team out of competition for the rest of the weekend.

Kalle Lyrén leads the way in PSB with the Parts Europe Suzuki with a 7.08/188.62 to comfortably pace the field with Martin Newbury the best of the rest at a distant 7.2239.

Swede Mathias Bohlin heads the Super Street Bike field with a 6.9719/191 (so room for improvement there) with Vesa Ruhanen calming his Finnish Kwaka down to a 6.974/200 after an extreme launch in the first session.

Mogens Lund and Anders Blanck round out the top half of the field with championship leader Dániel Donát Lencsés only just in at a lowly seventh spot with a 7.7437 but at a class leading 205.60 mph suggesting the power is in there.

After far too long a break, the FIM-E Dragbike championship resumes this weekend in Sweden with the Summit Racing Internationals at the always quick Tierp Arena just north of Stockholm. With the weather set fair for the whole weekend (peering out of our hotel window there isn’t a single cloud in the sky) it could be a bit of a barnstormer.

Eight entries on the list for Top Fuel Bike suggest an all run field on Sunday, but there are quite a few scores to settle before we get there with current championship leader Rene van den Berg looking to keep ahead of the pack but there are three proven five second runners also on the list (Sverre Dahl, Rikard Gustafsson and Jaska Salakari) that are going to push the rest of the field for the top qualifying spots. Van den Berg and Jan Sturla Hegre will also be looking to join the five second club over the course of the weekend. 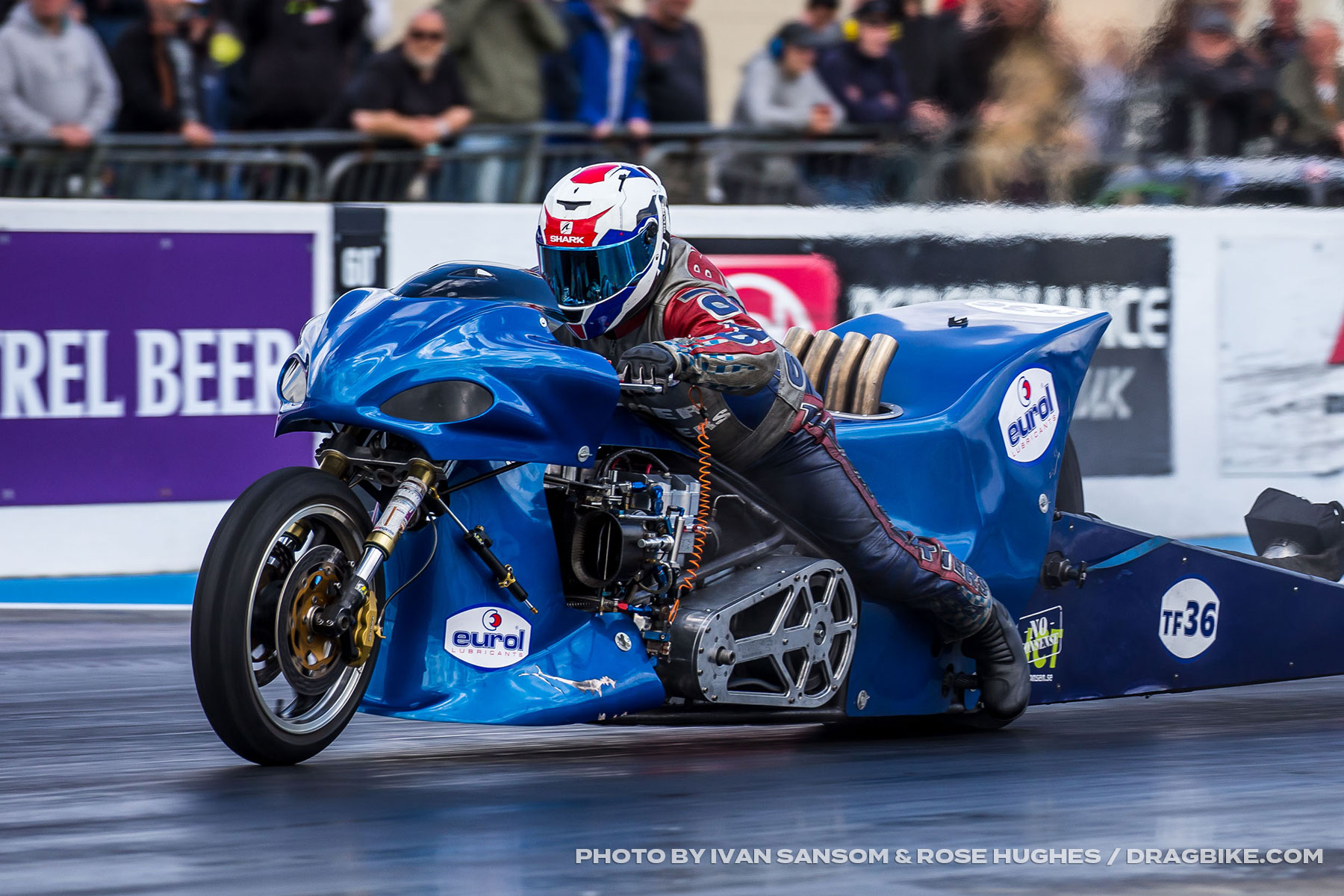 Twelve entries in Super Twin and it really is going to be a battle royal through qualifying to make the field and a very difficult pick for who could be contending for top spot with Marcus Christiansen looking to bounce back from a catastrophic engine explosion at the start of the season, points leader Martijn de Haas looking to maintain his championship lead and a returning Per Bengtsson on the blown parallel twin coming into the event after some nice consistent numbers at a domestic event at Mantorp last month. The Finnish threat isn’t something to be discounted either as Ismo Mäenpää will be looking to pick up where he left off in Norway last weekend with a string of PBs leading to the event win, and then there is also Samu Kemppainen who is always in the trophy hunt with his V60 ride. 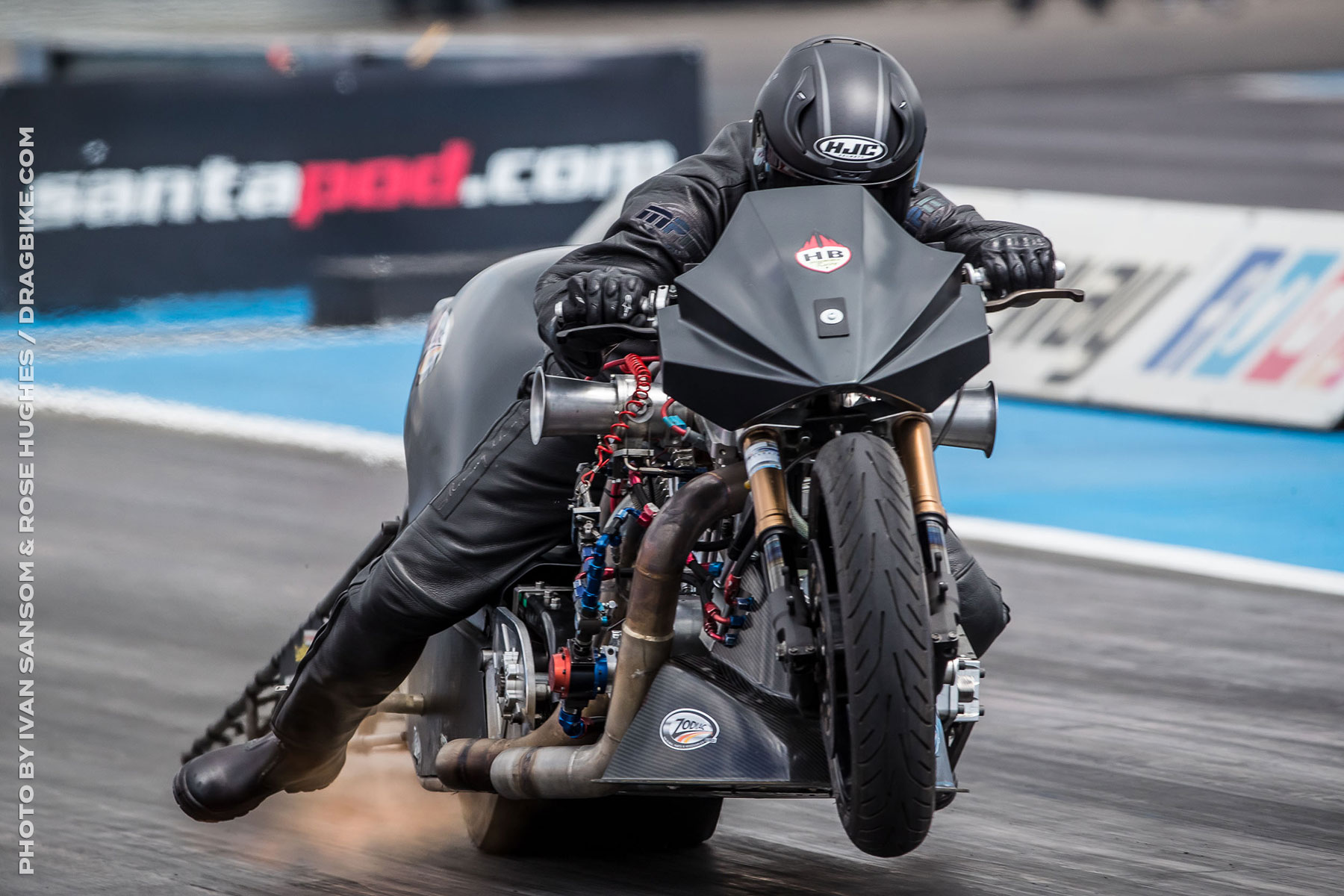 Six stockers are on the event list with Martin Newbury probably the pick of the bunch for the championship points but Kalle Lyrén is always a major handful at his ‘home’ track and there isn’t a lot to suggest anything different this time around from the Lyrén Motorsport/Vance & Hines Suzuki. 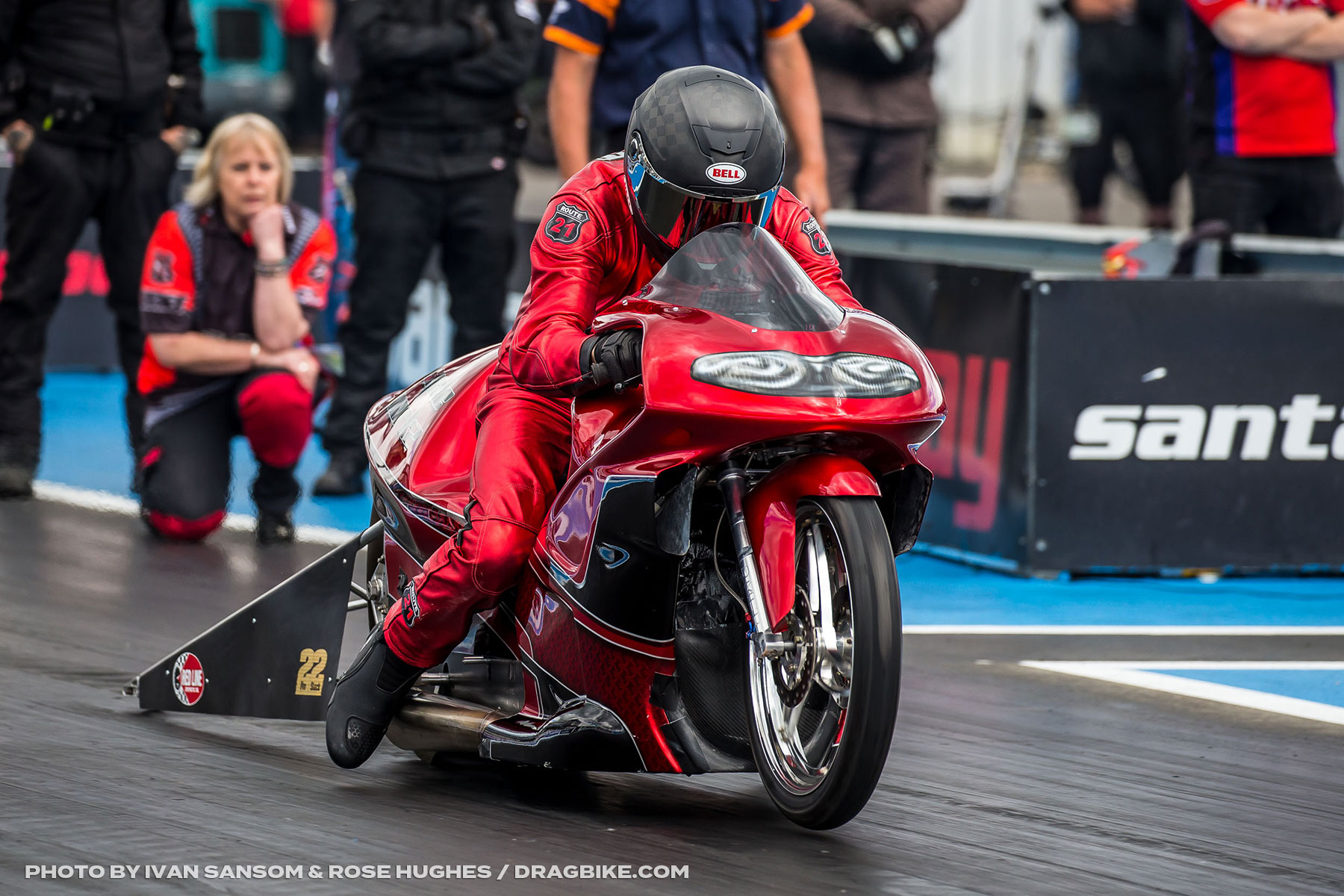 A major change in the entry from the Main Event at England back in May has the same number of competitors but a very different accent with the Nordic teams coming out in force and only Mogens Lund and Dániel Donát Lencsés being repeat contenders. Lencsés is going to be ferociously quick on his DME Racing built Suzuki, but there are a whole slew of racers who could pick up the pieces if the Hungarian slips up. 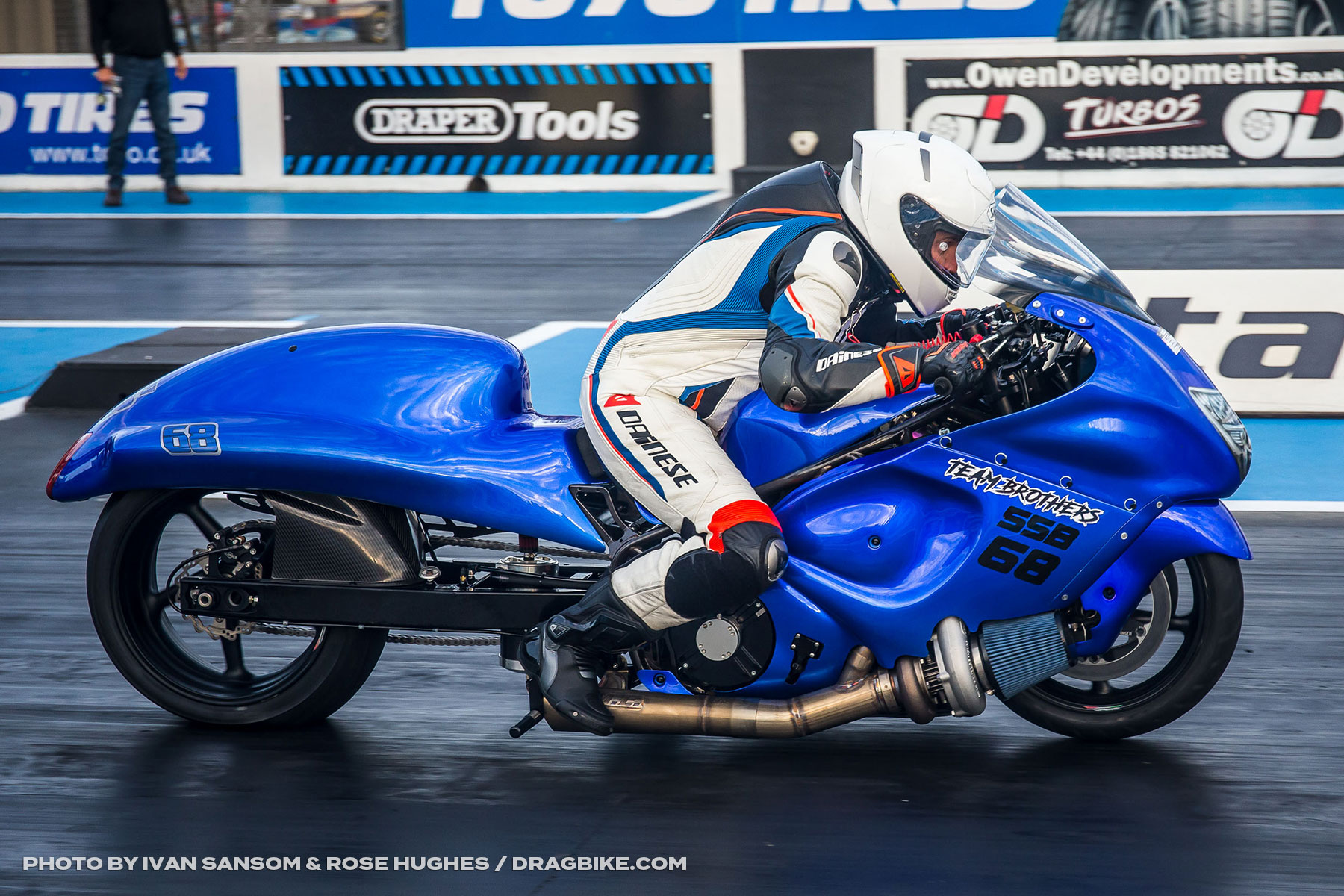 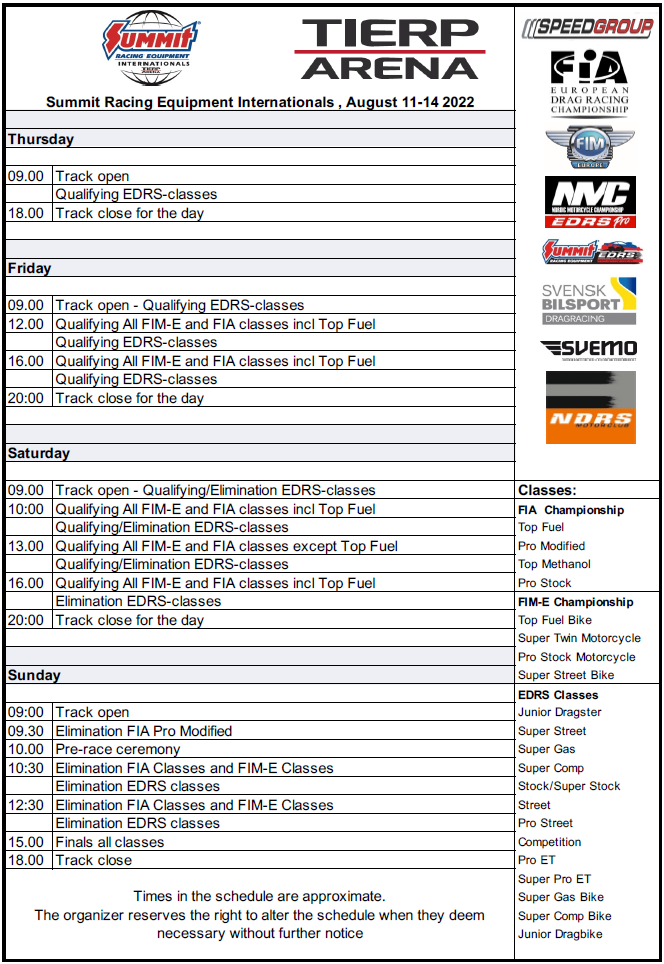