The ManCup world finals in Valdosta was truly an international event. Half the people that walked by our pits had funny accents. France, French Guiana, Holland, Germany and Australia were just some of the nations represented by competitors or spectators. 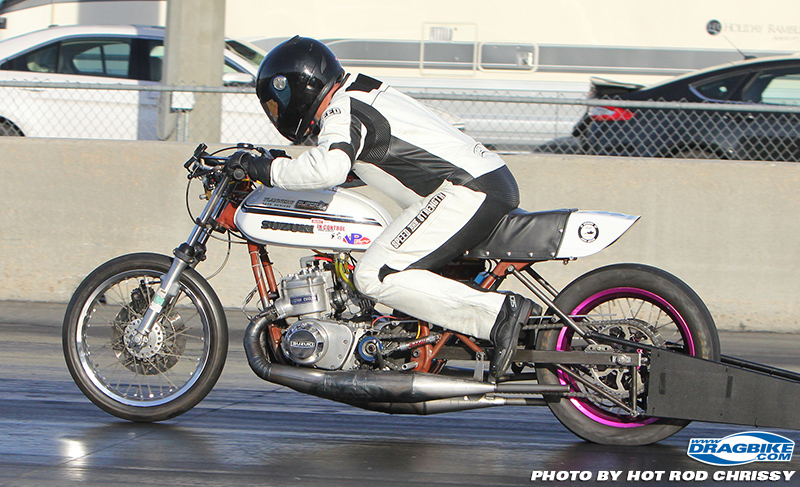 And what a performance by the competitors in Top Fuel, 5.77 !!! that was a spectacular pass by Dave Vantine, worth the price of admission to feel the thunder and watch it go past like a big flame-belching bullet. Well done to all the guys on the Alwine RacingTeam. And to be there when Sam Wills ran his first official five second pass, that was totally cool.

Super Eliminator had the largest field since it was included in the ManCup lineup. 25 bikes that ranged from vintage 400cc two stroke bike to modern street bikes. Fifteen bikes were running off of existing national records and nine of those lowered their respective records. The existing records for modern bikes were fairly soft but not anymore. The new record for modern street bikes with pipe/arm and power commander but a stock clutch was lowered by Spencer Claycomb to an 8.79. This is the D/SS/HH class, the HH is for Heavy Hitter, no jockeys in this class, most of the racers in this class are corn-fed boys, no skinny dudes allowed. Spencer Greet was also running in this class and his bike saw a dramatic increase in performance since he set the record in Memphis in June of this year, dropping almost four tenths off his existing record.

In the Skinny Dude Modern Street bike class (D/SS), Eric Barnett lowered his existing record a little more than a tenth. And in the old, fat, bone stock street bike class (D/S) Rick Steinard dropped his record almost a quarter of a second on his Kawasaki Concours.

No. 1 qualifier was Alex Hughes, his 8.06 run in Q1 was a big step in the right direction but he was not very excited about the E/T, he was hunting the first “7” on a normally aspirated 750cc bike. Close but no cigar as the bike slowed into the teens during eliminations. On a brighter note, his crew chief didn’t make any huge brain-dead mistakes this weekend. He is still taking applications for a younger crew chief that doesn’t drool on himself but says that his final decision won’t be made until after Christmas.

GW Cycles from Knoxville, Tennessee brought four H2 bikes to this event, everything from a bone stock motor streetbike that was ridden by John Markham to a brand new, never been run, nitrous breathing monster that was piloted by Jimmy Chongris. The Nitrous bike had some teething issues in practice so the crew chief decided to run on gasoline and on the first pass in competition ran an 8.58, rare territory for a naturally aspirated H2. This makes it one of only five H2s to ever go into the 8.50s without nitrous.

Butch Million had the racers sign the un-painted bike for luck, lots of racers and fellow competitors signed it but it started running a lot better after Mikey Chongris added his somewhat unique touch to the bike.

S/E saw its first CB750, Frank Loney on his beautifully prepared 1978 CB750 ran into the mid 10’s, setting the record in the “A/SS” class at 10.601. Bill Benton promises to bring his bike out in 2016 and drop this record like a bad habit. Frank didn’t seem to scared. The CB guys seemed a bit like the British racers…”I say my good man, that is an attractive record you have there, would it be a terrible imposition if I dropped it a bit?”

Joe Mejia made the trip all the way from Phoenix Arizona with his “Little Giant Killer” RD 400 based dragbike, it was great to see a racer that is dedicated enough to drive 2,000 miles to an event.

By the numbers: Six teams from Texas, Three from Ohio, Three from Michigan, Two from Tennessee, Two from Florida, Two from Arizona and One each from West Virginia, Maryland, Alabama, South Carolina and Connecticut, and Garrett Wood came all the way from Lake Chapala Mexico.

Twelve bikes were vintage two strokes, seven were modern street bikes and the remaining six bikes were a combination of vintage four strokes and one 1990s street bike. It is interesting to note that all of the bikes were built in the 1970s or after 1999. No entries with original manufacture date between 1978 and 1999.

A total of thirteen records were either set or lowered, the records database has been updated: http://www.dragbike.com/super-eliminator-records/

Super Eliminator was contested at two races this year with points awarded for Rounds won, qualifying position, 50 points per record broken or established, with bonus points awarded for No. 1, 2 or 3 qualifier with a national record. Points were also awarded for winner and runner up. The points system was based on the IDBA rulebook last published in 2000.

There were seven bikes left in competition when the race was called due to a curfew. The remaining points that would have been awarded totaled 550, these points were divided equally between the seven remaining competitors.

The 2015 S/E Champion is Alex Hughes with 1,047 points. Second place is Larry Zientek with 888 points. The top four finishers are on the Hughes Racing Team with Eric Barnett and Spencer Greer in third and fourth places. A big shout out to Hughes Racing who entered six bikes in both S/E events.

We would like to thank Fast by Gast for their sponsorship in 2015, it is great to have a sponsor that understands the passion we have for these old and obsolete machines as well as modern bikes.

Other sponsors included Vanson Leathers, $500 in store credit to the winner, this will carry over to the next race. GW Cycles in Knoxville, Tn added $500 cash to the pot and although there were no winners/runner up etc, the money was divided equally between the remaining 7 competitors. Baxter Appraisal Company gave $100 to the No. 1 qualifier.

For more information on the class or if you have a question find us on Facebook – click here.

Please do not hesitate to send a PM off of Facebook if you would like information on the class, records, subclasses or points. Or just want to tell us how fast your bike would be if you ran the class.