HomeTeam ReportsSurging Hector Arana Jr. rides into Norwalk with high expectations and a...

At the previous NHRA Mello Yello Drag Racing Series event held for the motorcycle class in Englishtown, N.J., Arana Jr., a 28-year-old resident of East Northport, N.Y., raced to the final round before settling for runner-up honors. It was his first appearance in a money round of the season and first since Indianapolis last August.

“We did everything but bring the Wally (trophy) home,” Arana Jr. said. “We’re on a good roll. We’ve figured out a great set-up for the bike that’s very consistent so it’s just up to me to do my job now. 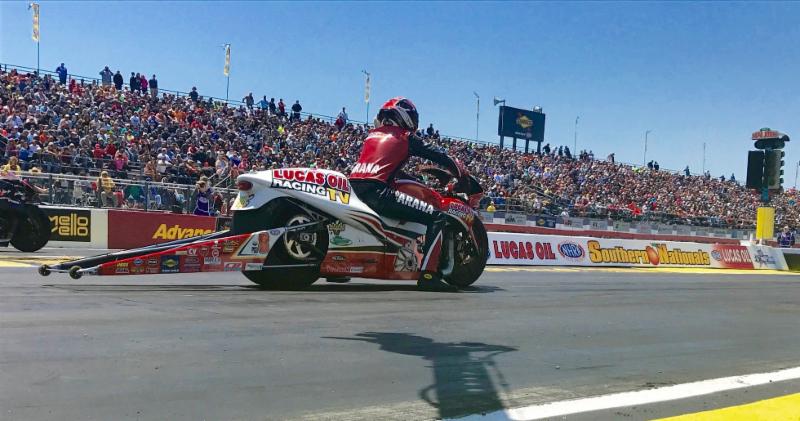 “We’re very confident and excited going into this weekend in Norwalk. In the past, there were times when I’ve feel lost and nothing seems to be going right as far as power or new things to try, but now we’ve hit on something good. We’ve found some new power and there’s a lot of good energy on our team going into this weekend that hopefully carries for the rest of the season.”

Arana Jr. has seen some success at the famous Norwalk facility. He was the runner-up finisher in 2012 and qualified No.1 for the event in 2015. This time through he will be racing without the other red, white, and blue-clad Lucas Oil Buell on the track.

Arana Jr.’s teammate and father Hector Arana Sr. announced he will be out for approximately three months due to a non-racing accident he recently suffered to his left shoulder when he was changing a tire on the race rig. It will be the first NHRA event Arana Jr. has competed in without his father on the entry list.

“It’s unfortunate but there’s nothing we can do about it,” Arana Jr. said. “He had surgery right away so he can get healed as quickly as possible, and hopefully he can be a blocker for me in the playoffs.

“He’s here in Norwalk and he’s going to be helping with my bike. It will certainly be different not seeing his bike beside mine in the staging lanes but we’ll get through it together.”