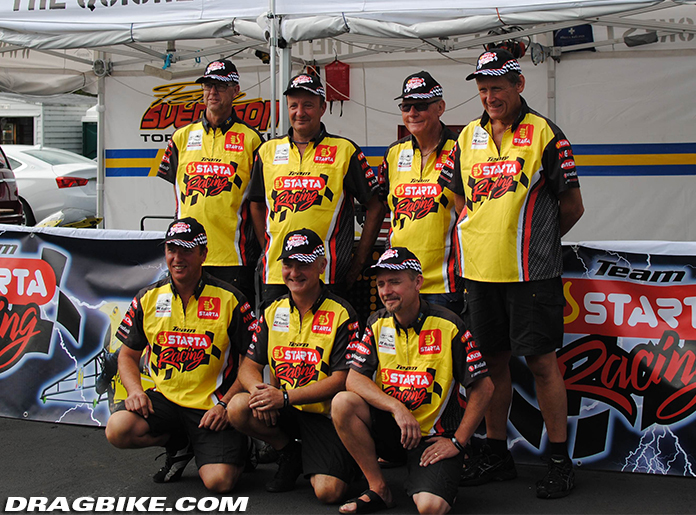 A season where the World Record finally got back to Sweden after many years of absence since our dear friend and fellow racer at that time Stefan Reisten had it in the late 80’s!

As many of you might remember we wrote in our Season Review from 2012 that the season of 2012 would always be remembered and when looking back towards the season of 2013 we all know that it will always have it’s place in the history books after the magic Sunday at Tierp Arena in August when we ran a new World Record and backed it up not only once but two times, with a string of numbers that has never been presented by any team in the world before.

The mainly change that we had made for 2013 was to mount a bigger supercharger HPS 2.1 from HPS Superchargers that we had high hopes for and that showed out to be a perfect match for our engine combination.

Our season started 10th – 12th of May at the EDRS Nationals when we went to Tierp Arena in Sweden to test our new set up at the smoothest track in Europe for the very first time. We had extremely good air conditions through out the whole weekend and at several tests were carried out in order to find a set up for the upcoming season. 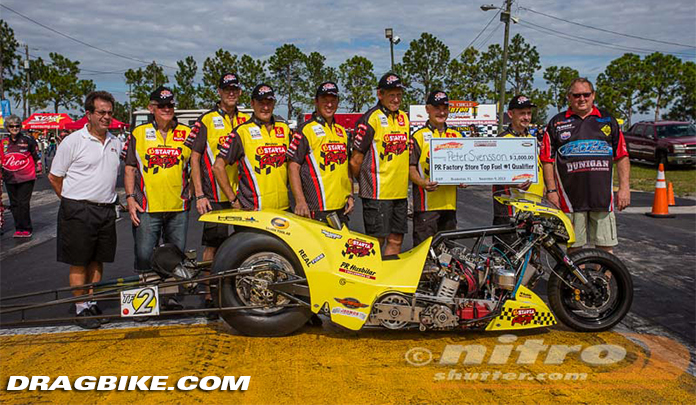 Sweden Internationals 13th – 16th of June, Tierp Arena Sweden
During this race we mainly focused on stepping up our combination even further from the test session in May at Tierp Arena and had a great time doing that. The changes resulted in a new personal best of 2.496 sec. at 330 foot!

Summary of the weekend:
– Qualified no 1, Winner of the event. The win showed out later to be good enough for the 3rd spot in the European Championship when all the points were calculated at the end of the season.

Scandinavian Internationals 23rd – 26th of August, Tierp Arena Sweden
The race where our World Record setting dreams came true!
We had to detune the bike compared to the race before in June since the air was very good and by doing this we also created a new tune up that was exactly what we needed to be able to run a backed up World Record.

Haltech Manufacturers Cup 9th – 11th of November, Bradenton Florida USA
The final event of the year for our team that started more or less the week after Scandinavian Internationals with preparations in order to be able to ship our bike and all our equipment in the container, that our good friend Per Bengtsson had arranged, that would take our both teams and Eric Tebouls rocket bike to Bradenton in time for our race at Bradenton Motorsports Park.

Our team came to the track the weekend before the MFC and we were allowed to make some test runs on that was really promising, before we rented the track together with Per Bengtsson and the “Beast” Team on Monday before the race. Unfortunately we discovered some strange mechanical problems that had to be sorted out before the race. As many of you know we did solve all our mechanical problems as late as on the night between Saturday and Sunday on the actual race. And we were able to start the elimination thanks to a fantastic clutch work made by our new friends at Roaring Toys very late on Saturday evening.

Summary of the weekend:
– Qualified no 1, Runner up of the event, Becoming the 7th member of the famous American “MTC 5 Second Club”, finishing 5th in the Manufacturers Cup (only participating in one of four races) and not to forget, having a great time with all of our American/Swedish/French/German/English friends, fans and fellow races! 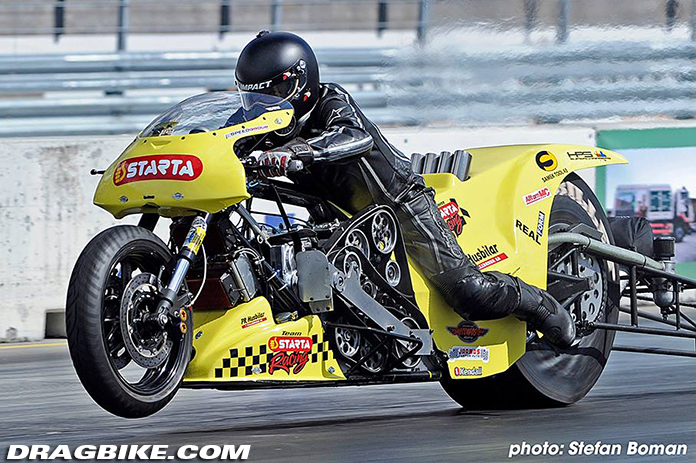 We are very proud of what we have achieved so far especially since we have not been able to run a full 1/4 mile run yet with our new engine/clutch combination, that still is under development and we know that there is more “in the bike” but we just have to figure out how.

During the record setting 2013 season we have made a lot of promising tests that hopefully will pay out even further in future races, where Team STARTA Racing and other Swedish teams have high hopes to be able to represent the Swedish National Team during a possible World Cup in Top Fuel Bike, that hopefully will come true in the near future if everything goes well.

A big THANK YOU to all that makes this possible:
• STARTA Produkter, supplied by Sollebrunns Oljeservice www.startaprodukter.se
• PR Husbilar, one of the largest companies in the western region of Sweden selling RV’s www.prhusbilar.com
• HPS Supechargers, No 1 when it comes to superchargers www.hpssuperchargers.com
• Samek Tool AB, who makes some of the best molding tools in the automotive industry in Sweden www.samektool.se
• Real Form, product development within mechanical design www.realform.se
• Goproactive, supplier of pc and network solutions, outsourcing, online services
communication systems, security and more www.goproactive.se
• Swecomposite, No 1 when it comes to bodyworks for dragracing purpose and many other areas using the same technique www.swecomposite.com
• Temec, one of Sweden’s leading companies that sells hot runner systems and much more for molding tools www.temec.se
• Jarmos Custom Auto, for all your help during all years supplying the best parts available
• Pippi, No 1 when it comes to marketing www.harleydrags.com
• Roaring Toys, for all your help at the Haltech World Finals 2013 www.roaringtoyz.com
• All our fans and family members that are supporting us towards new achievements every year!!

We would also like to take the opportunity to thank all our friends, competitors, track staff, race organizers, the former owners of Tierp Arena, everyone at Bradenton Motorsports Park, FIM Europe/SVEMO officials and the staff at Speedgroup.eu, Eurodragster.com, Kingracing.com, Stripbike.com, Dragbike.com, Patrik Jacobsson, Stefan Boman, Ivan Sansom and Rose Hughes, Tom McCarthy, Jay Regan, Larry Burgey, Pasi Upponen and many more persons for your help and support during 2013 and wish all of you a great start of the 2014 racing season!

For more information about our previous achievements and updates please visit www.billetracing.se (in English).

Photos by our good friends Ivan Sansom and Rose Hughes at Nitroshutter.com