Some of you may have heard about the new Bazzaz fuel management system. It was originally introduced for the road racing community but has now made its way into drag racing. AMA Dragbike recently announced that all of the Bazzaz products are legal for use in most classes.

I recently purchased the Bazzaz Z-Fi unit along with the ZAFM module that runs the O2 sensor for my 2002 Hayabusa.

The installation was very easy for the Z-Fi unit, taking only 30 minutes or so. There are plug in connectors for each fuel injector, for the TPS, for the gear position sensor and the RPM sensor. The harness also has a ground lug (I’ll elaborate on this later) a switched power lead and a map select connector. 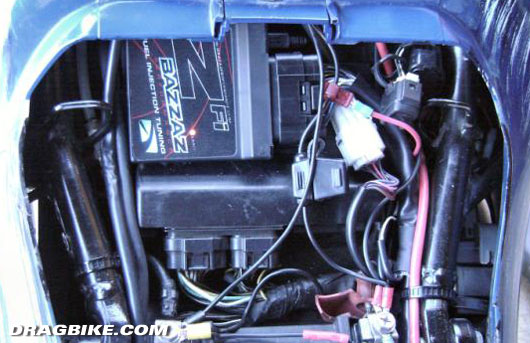 For the ZAFM unit I had to weld a bung on my exhaust pipe for the O2 sensor. The time involved for this could vary depending on how much you have to remove in order to do so. I am running a Velocity Stage 1 turbo and welded it just before the bend on my exhaust pipe. It is about 5 inches from the turbo. You would have to check with Bazzaz to see where you should mount it on other types of exhaust systems. 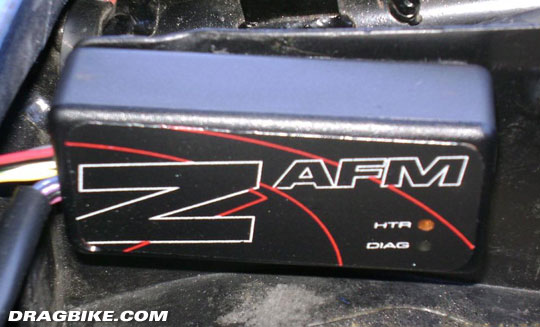 Once everything was installed I took the bike to Livengood Motorsports in Loganville, GA to dyno the bike and set the fuel map. Brian and Sheila run the place and have been a tremendous help this year in keeping my bike running. The unit is tuned by putting it in self- mapping mode and picking an air/fuel ratio you would like your bike to hit. Next you run the bike through each percentage of throttle up to red line in 4th gear and let the unit record your air/fuel ratio and make the necessary adjustments. Basically you start at 10% then 20% then 30% and so on.

Now in a perfect world this takes about 20 to 30 minutes. In my world, where pigs wearing lipstick are known to fly, anything can happen.

The Bazzaz software is very easy to use and has an RPM indicator along with a throttle percentage and Air/Fuel indicator. In a normal situation the throttle percentage should move smoothly from 0 to 100%. For me it moves from 0% to 80%, then back to 20%, then to 60%, down to 40% and up to 90%. This all happened while I was holding the throttle at roughly 10%.

Right away we attributed it to my TPS going bad, so we called 6 motorcycle shops all over town and actually found a Suzuki dealership with one. Does anyone stock parts anymore?

Once installed the same thing happened all over again.

This prompted a call to Bazzaz. Joel Romero was the first person that answered so I explained my situation to him. Naturally this had never happened before. Joel asked me to send in the unit and they would run a diagnostics on it.

4 days later I had a new box sent to me.

Back at Livengood’s dyno we started again. This time I had on O2 sensor error and the TPS indicator was jumping all over the place again. I ran up to Autozone got a new O2 sensor. (BTW The ones Bazzaz uses are also used on Porsches and Mercedes, the connectors are the same, the cable length varies.)

Once installed the TPS indicator was still wigging out on crack and the O2 sensor error was still coming up.

Another call to Bazzaz put me in contact with Ron Thibodeaux who also was puzzled and then transferred me back to Joel. I have to say that the people at Bazzaz were extremely concerned and wanted this problem fixed are are very well versed in their product. During this exchange I had also talked to Chris and Del who work there and they all went out of their way to come up with a solution.

Back to the dyno.

This time at Livengood Motorsports, Ron from Bazzaz was actually on site with the Tucker Rocky representative to show Brian how to install a complete Bazzaz system and tune it on the Dyno.

Bazzaz also has a Traction control unit and a quick shift unit along with the fuel management unit. Just so you know, you cannot add these units on the bike at a later time. If you buy the Fi unit and want the TC unit you are not going to be able to do it. So before you run out and get one, figure out what you want or think you are going to end up using later on down the road.

On the dyno Ron took a Suzuki GSX600R with the complete system mounted and ran it through the throttle percentages. Ron set the software for a 13.0:1 A/F. in 20 minutes they had a base map. He also mentioned that this was not developed as a closed loop system for two reasons. One, so that people with dynos still had business. This unit still requires its base map to be made on a dyno and checked. The second reason is in case something goes wrong, if an O2 sensor fails or the unit itself goes down, it will not run the motor into a lean situation. 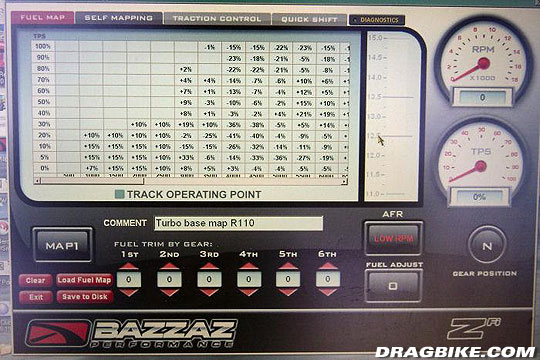 All the units also have the ability to store 2 maps; one could be for motor only the other for NO2 or extra boost. All you have to do is connect a switch to the already provided connection on the Bazzaz wiring harness and you are ready to go. Trim for each gear is possible by raising the percentage, it will apply that percentage to the base map when you change to that gear.

You also have the ability to manually make adjustments to the map as on a Power Commander. You can also cut and paste sections of the map to apply to one already made. For instance, if you only want to take the recommended adjustments in the 100% throttle range, you only have to highlight all of them and apply them to your existing map. The rest of the map stays as it was. 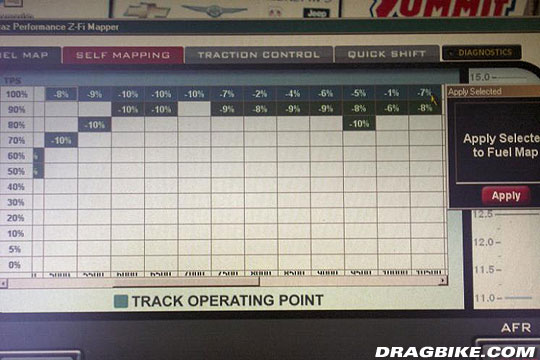 He also explained how to set the traction control. This is more targeted to road racing than drag racing. The unit looks at RPM spikes and shuts down individual cylinders on the engine until it comes back under control. There are no wheel sensors used. Ron informed us many an engine was destroyed in the process of perfecting this. Brian called it good old-fashioned R and D, “Research and Destruction”. One thing to remember for any of you drag racers thinking of using the traction control, IT DOES NOT STOP THE FRONT END FROM COMING UP.

Currently the Bazzaz units do not offer ignition timing, although it is something they are working on. 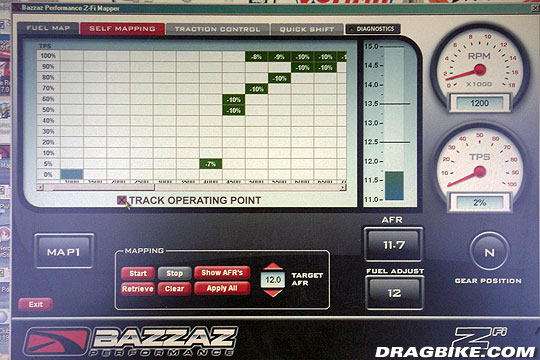 Now when I am at the track before each run I can set the unit to “self mapping” and see what changes are required due to weather or altitude. No guess work required.