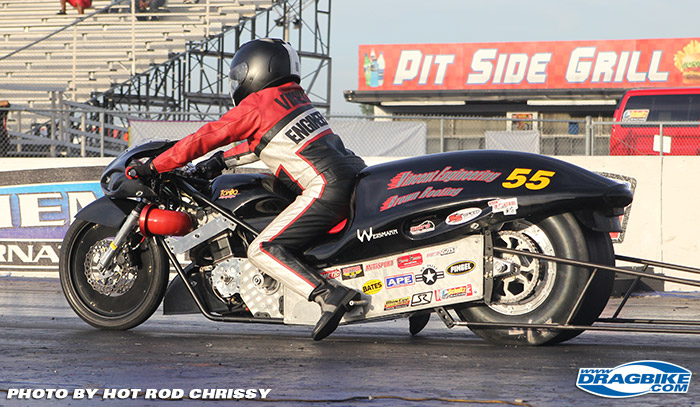 Vincent Testa is building two identical Hayabusa Funnybikes, and it has been a process getting them sorted out.

“On Saturday we really struggled when I couldn’t get the bike to go straight down he track” said Vincent. After the team and I struggled for awhile with no results, we decided to call on a few of our Funnybike friends for help. It did not take long for Brian Louis to find that the tire circumference was much bigger on the left than the right side of the tire. So I headed over to PR Factory Store and picked up a new Mickey Thompson Tire from Don Plesser (Great people to deal with!)

In first round of eliminations we had Rob Giard who qualified higher, which put us in the ‘lesser left lane’ for that round. Per my wife’s instructions, Ride it like You Stole it, I gave it all I had off the tree. You can imagine my surprise after plugging second gear and looking up to find the Busa tracking right in the middle of the lane! Not only was it the first straight pass, it was also the quickest of the weekend!

My new brakes are great, but a little too aggressive as It locked the front wheel twice and sent me plowing into the gravel trap. After being drug out of the pit, my team removed 30 lbs of gravel from the bellypan, motor, fuel tank etc.

Second round we face Brian Louis. And since I had lane choice I decided to let Brian choose the lane he wanted for helping me figure out the tire issue.  Brian picked the right lane and I managed to get another win! 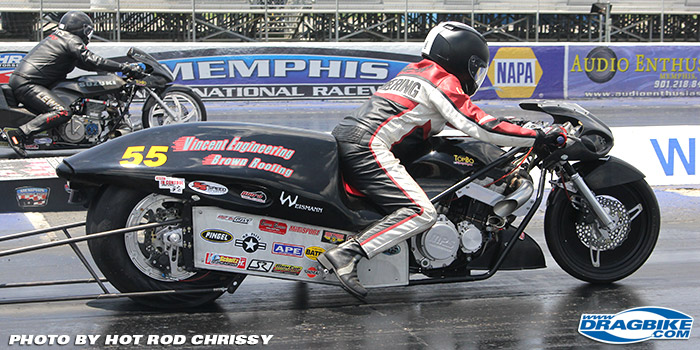 In the semi-final I was once again in the left lane against Kenwone Fulsom who was also on a busa. We left with almost identical lights, however I was able to get the win running a second quicker than him. But this is where my Luck ran out.

For the final round I had to face off against Mark Rendaluk. This team has it together! Knowing that for me it was Game Over, I decided to change my gearing against the advice of my team and wife.  So it shook the tire a bit on top of first gear and it rattled it into third gear. This was the fourth time that I have been runner up to Mark and Chris! All in all, for running the Man Cup race for the first time we were very happy with second place.

While the other Busa also went a couple rounds, we still have a lot of work to do on it. We would like to apologize to Mr. Roderick Mansow of Kansas for crossing in to his lane during qualifying, sorry my friend!

I would like to thank My crew, Craig and Glen Brown, Ken Shurts, Glen Frazier (who flew down from Canada), Tony Parker, Tommy Bolton, Austin Wagoner and Sheree Testa. Thanks also to ManCup for the great event and Dragbike.com for the coverage. 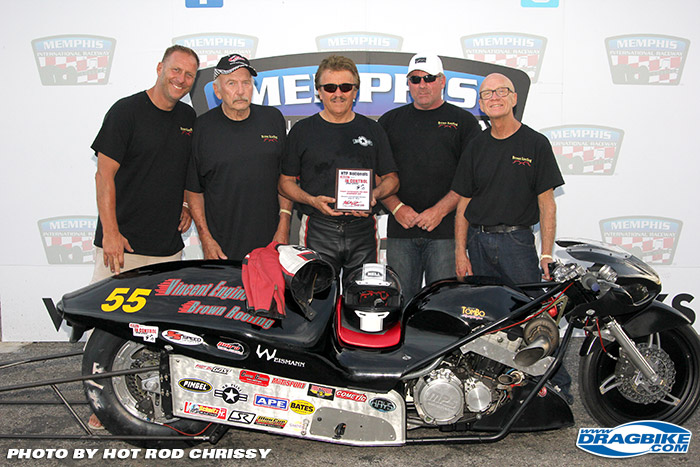