The problem dates back to the extra 15 pounds his motorcycles, all EBRs, have carried since the Denso Spark Plugs NHRA Nationals. It’s impacted the 60-foot times of their motorcycles more than any other area of their elapsed time based on a couple of factors. First, the EBRs are heavier than, say, the Suzuki’s, which are known for getting to the first timing block faster than any other chassis. 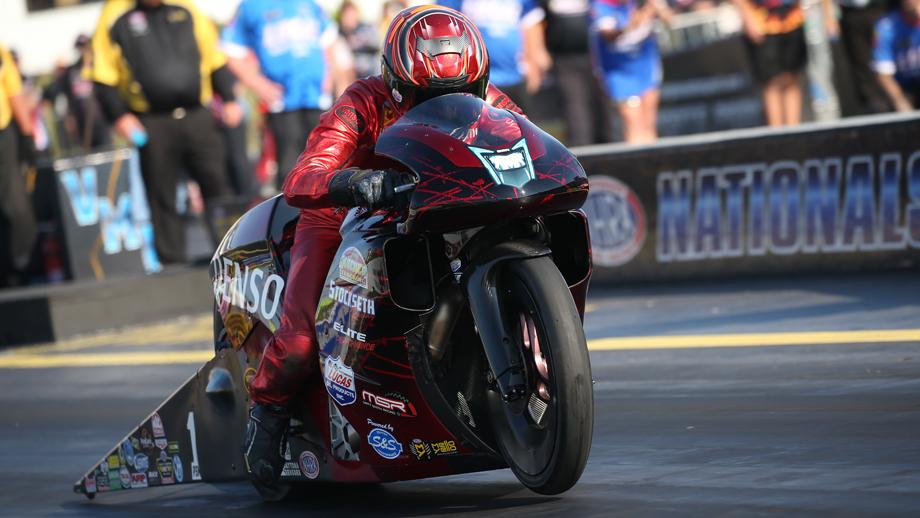 Second, when teams are handed extra weight, they get to choose how to apply that ballast. So, there’s some strategy employed to make the extra weight as little a hindrance as possible. Once Smith got that out of the way, he switched clutches, which we covered at the Southern Nationals. MSR is still running that clutch in Richmond, but the application is different based on performance at Rockingham Dragway between races.

“I got my bike working well and Angie’s tested well, but we haven’t gotten hers’ running the way we want it to here, so we’re still working on that,” said Matt. “Every track is a little different and of course it depends on how NHRA prepares the track. There are some they want a little less prep than others, so that impacts how we run.”

When Smith went to Rockingham, they tried to replicate typical NHRA track prep in order to get the best data possible. It’s worth noting this is relatively common practice, though there are times when teams will try to replicate specific scenarios if they’re struggling in certain conditions.

“We didn’t put too much glue on it, kind of slippery, we just wanted it to be as much like Atlanta Dragway as possible,” said Smith. “With this kind of clutch, we need to slide more than we used to. We know it’s going to be hot going forward, so we’re trying to adapt to that.”

That looks like a good strategy right now. Virginia Motorsports Park boasts a great surface, but we’ve already experienced the hottest track temperature of the season so far (134 degrees) and it’s only going to get warmer as the calendar turns to June, July and August. Smith finished Friday in the provisional No. 1 position and is hoping to get his first win of the season in Richmond.