The European Drag Racing season opened in spectacular fashion at Santa Pod Raceway over the course of the Whitsun Bank Holiday weekend. Offseason work at the track had seen the laying down of an all-new concrete racing surface with the expectation that quick times and close racing would eventually be the outcome. With most competitors getting their first look at the new track during the event and many recording personal bests it would be fair to say that the investment looks as if it will pay off handsomely.

Greek racer Fil Papafilippou quickly grabbed the headlines in FIM-E Top Fuel Bike with his first nitro-fuelled pass onboard the Gulf Oils Puma recently purchased from multi-time champion Ian King shocking the troops (and a few of the King Racing team members) with a 6.0991/214.08 on what was intended to be a 60-foot check-out. If that grabbed some attention, Fast Fil’s second effort was even more sensational with a 5.7826/236.16 putting him fourth on the all-time global ET list. A bit distant behind came last year’s title holder Rikard Gustafsson with a 5.9951 at a booming 250.55mph (the first over 250 in Europe and the third fastest in fuel bike history).

Any doubts over Gustafsson’s terminal speed were quickly dispelled in the opening round of eliminations when a 5.966/250.45 provided a stout back up and a win over Crane. Papafilippou progressed despite the timing system failing in his first round matchup with Pettersson while Borg shutoff before leaving the line handing Parnell a single and Richard headed to the semis with a low seven over an ailing Leeks.

The semi-finals delivered the two quick nitro bikes to the final, but Parnell gave Fast Fil (6.248/195.55) his best shot with a new PB at a very stout 6.740/218.00 suggesting that Barry Eastman and Mick Hand are really pushing things forward with the unique compound turbo setup, while Richard’s consistent 6.907/193.86 lowered his best giving Gustafsson a target to chase which he duly did with a 6.650/207.88. Despite the dropoff in performance in the semis, the final round delivered the quickest and fastest pairing in FIM-E history with a 6.017/227.82 from Fil just holding off a 6.027/240.32 from the hard-charging Swede. 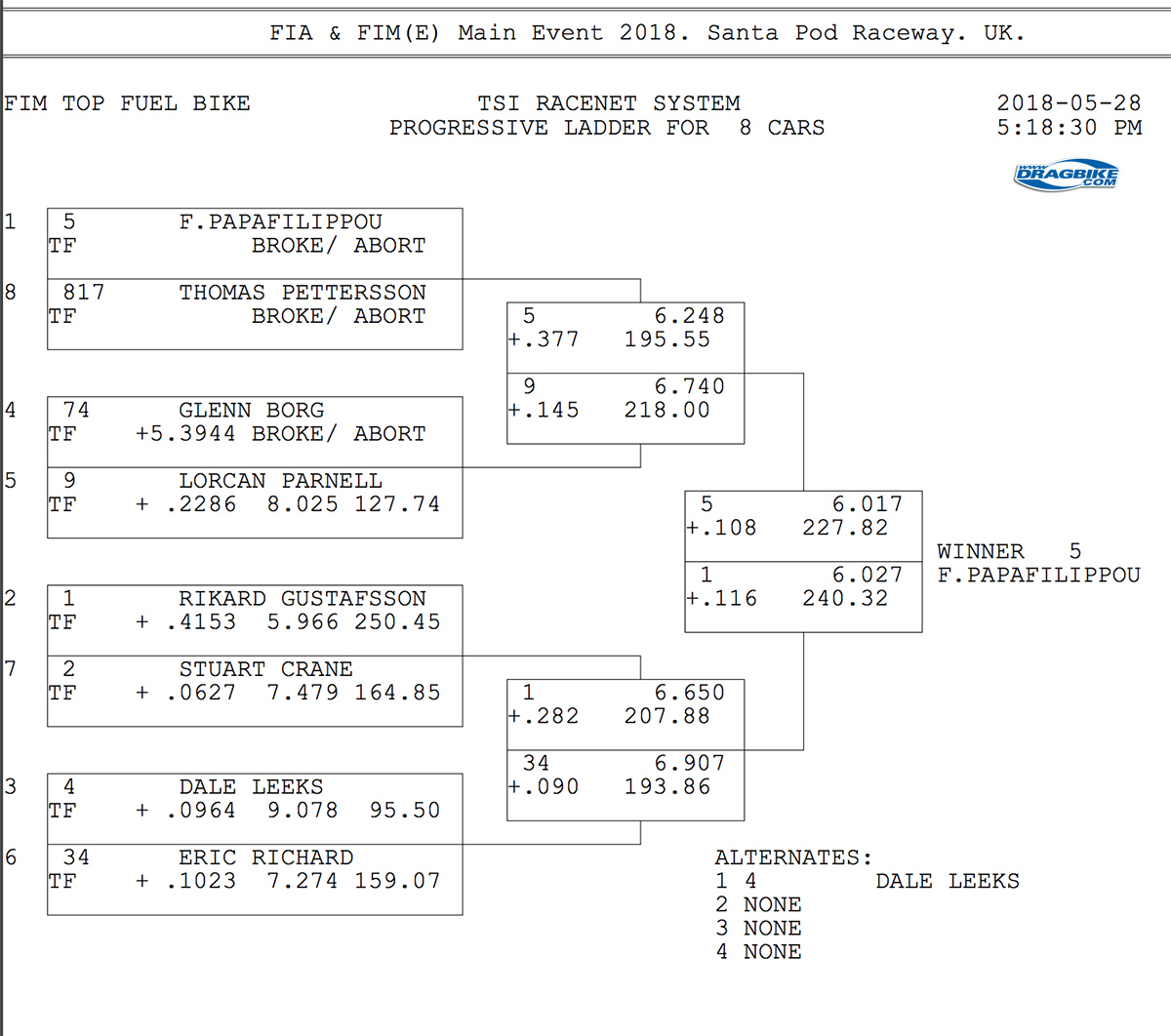 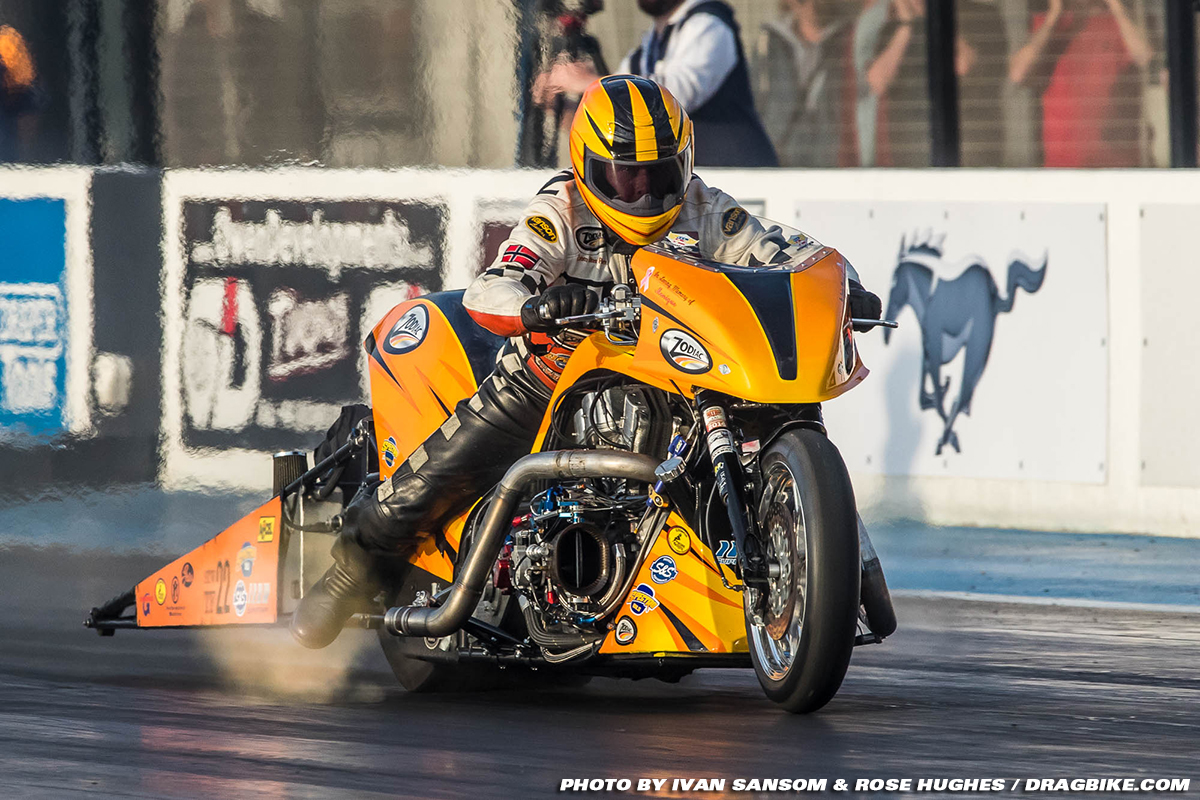 Super Twin really lived up to the Super in the class title, with the 2018 Main Event representing a substantial return to the depth in the field not seen for a while. Michael Christiansen and the unique ‘pro stock style’ injected bike built with his father Speedy delivering a low qualifying 6.4299/215.95 on their first visit to Santa Pod.

Neil Midgley dropped into the second spot with a 6.5660/183.54 from the Cannon Engineering blower V-Twin, returning Norwegian Hans Olav Olstad was third with a 6.7258/211.83 from the blown Puma parallel twin Thunderstruck, reigning champion Martijn de Haas (6.8775/206.29) and Ronny Aasen on the Pels Family/Zodiac blower bike 6.9884/206.11 rounded out the six-second runners, with class rookies Allan Davies and Marc van den Boer completing the qualified field leaving another returnee Christian Jager on the outside.

Eliminations went a bit crazy with all of the first round winners deep in the six-second bracket, with Aasen ripping off a sub-Euro record 6.385/198.91 demonstrating that the reworked bottom end on the Zodiac entry was working fine. Christiansen then took back class event low ET with a 6.337/212.10 in the semis to defeat Aasen’s 6.462/228.92 (the quickest and fastest elimination round in FIM-E class history – something of a theme for the event). 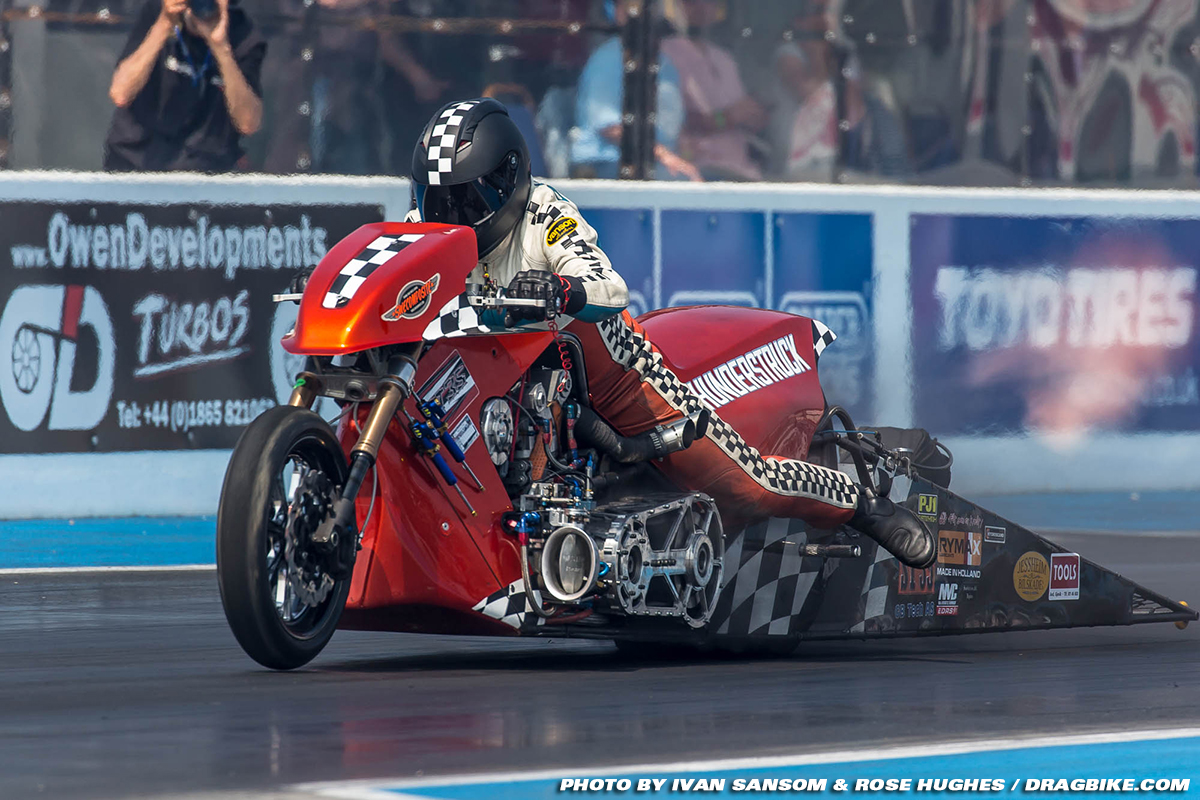 Christiansen’s opponent in the final was scheduled to be Hans Olav Olstad with the Thunderstruck parallel twin that had been recording consistent mid six-second numbers (a best of 6.533/220.10 and a 6.673 at a faster 223.44mph that almost had him in the field in a winning effort against Midgley’s 6.767/161.91) during eliminations. Unfortunately, the Danish injected V-Twin developed a fuel leak resulting in a shutoff before staging, handing the win to Olstad on his return to FIM-E competition. 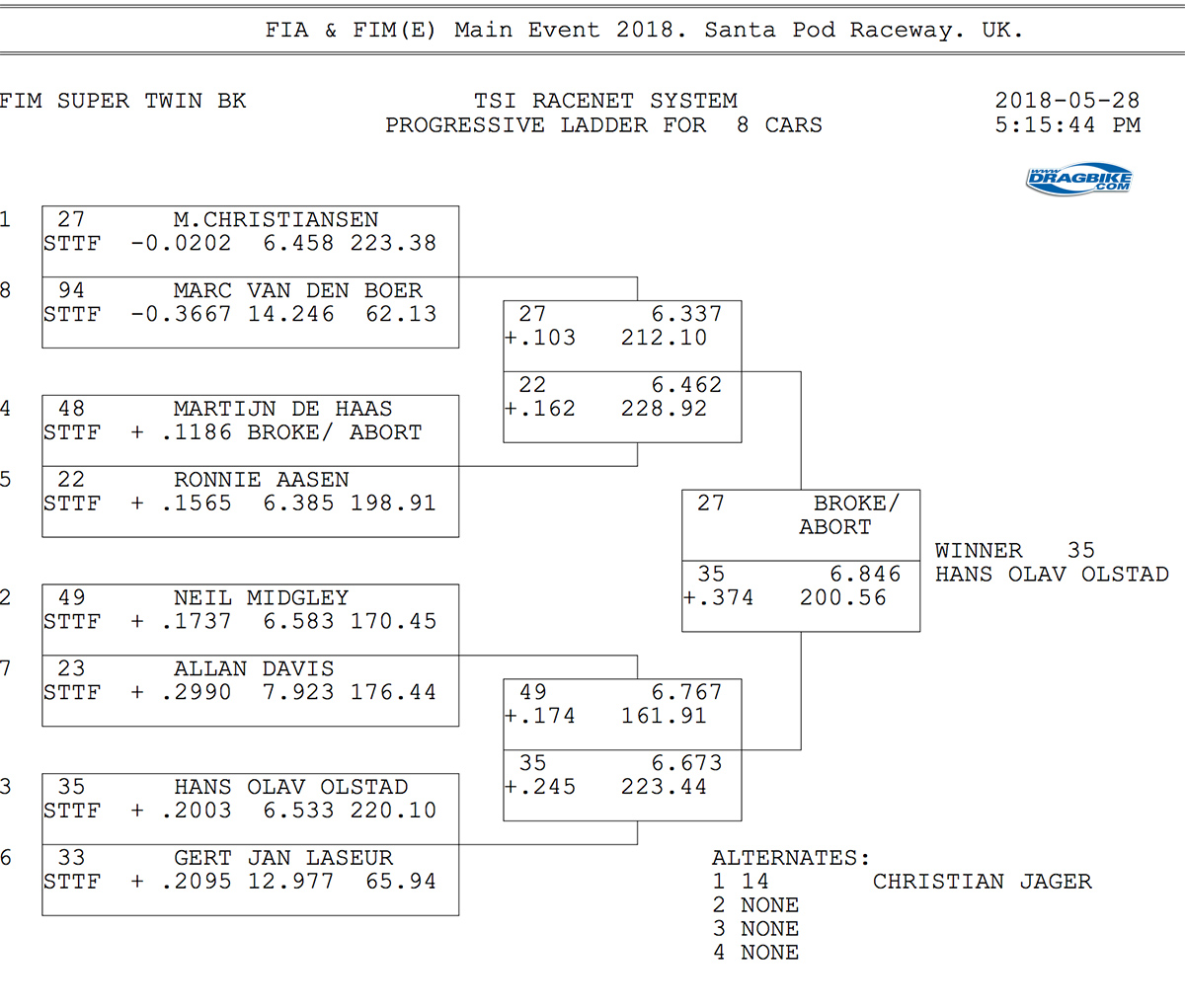 If TFB and STB were on a high, Pro Stock Bike looks to be a bit of a struggle this season with multi-time champion Fredrik Fredlund sitting out the year. A four bike ladder was the outcome of qualifying with five bikes on hand, Kenneth Holmberg taking the lead into eliminations with a 7.4348/172.38 but that came at the expense of a motor for the Swecomposite rider.

Holmberg redlit in the opening round of eliminations handing CBD Asylum-backed Alex Hope a spot in the final where he would meet France’s Maurice Bertrand who had benefitted from a solo when scheduled opponent Martin Bishop was a no-show. 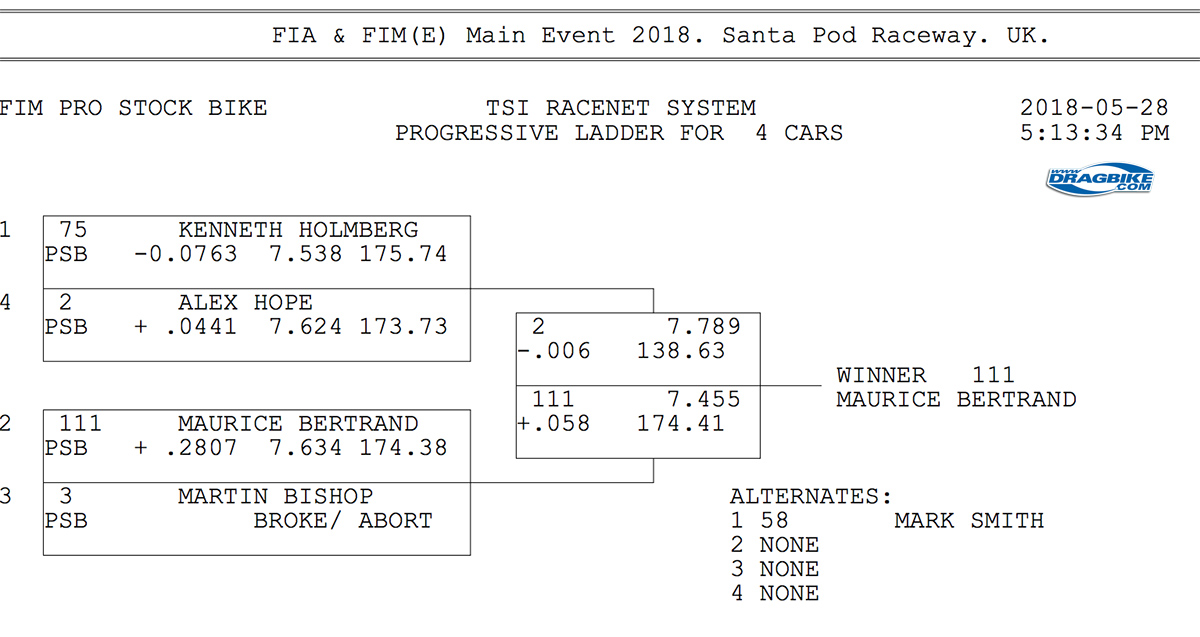 We are used to Super Street Bike delivering the numbers and the pressure of 24 entries pushed the 16 bike bump to a new record at 7.6380 with Jemma Venables earning the unenviable task of facing up to the low qualifier (at 6.9682 and a rapid 214.82mph terminal) in the shape of her father Steve.

Remarkably, the top two qualifiers would progress through the field to meet in the final, with Mogens Lund getting tantalizingly close to getting his first six-second ticket through eliminations and managed to defeat his 2017 nemesis Rick Stubbins at the semifinal stage.

Venables delivered a new class ET record with a 6.928/208.19 best in the quarters and a weaving 6.934/193.05 in the semis, the latter taking the final four win over Robert Haggblom who entered eliminations as an alternate. 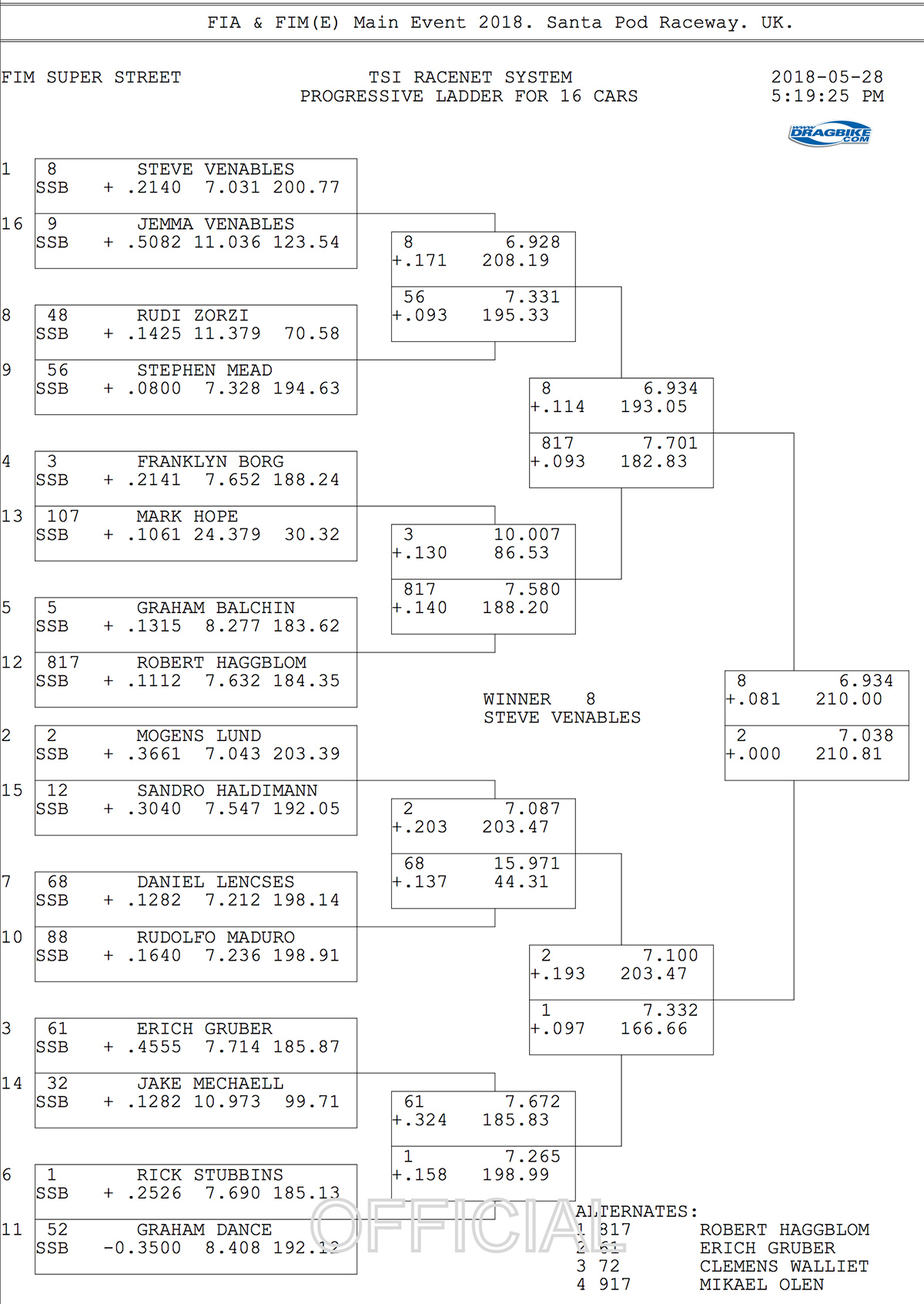 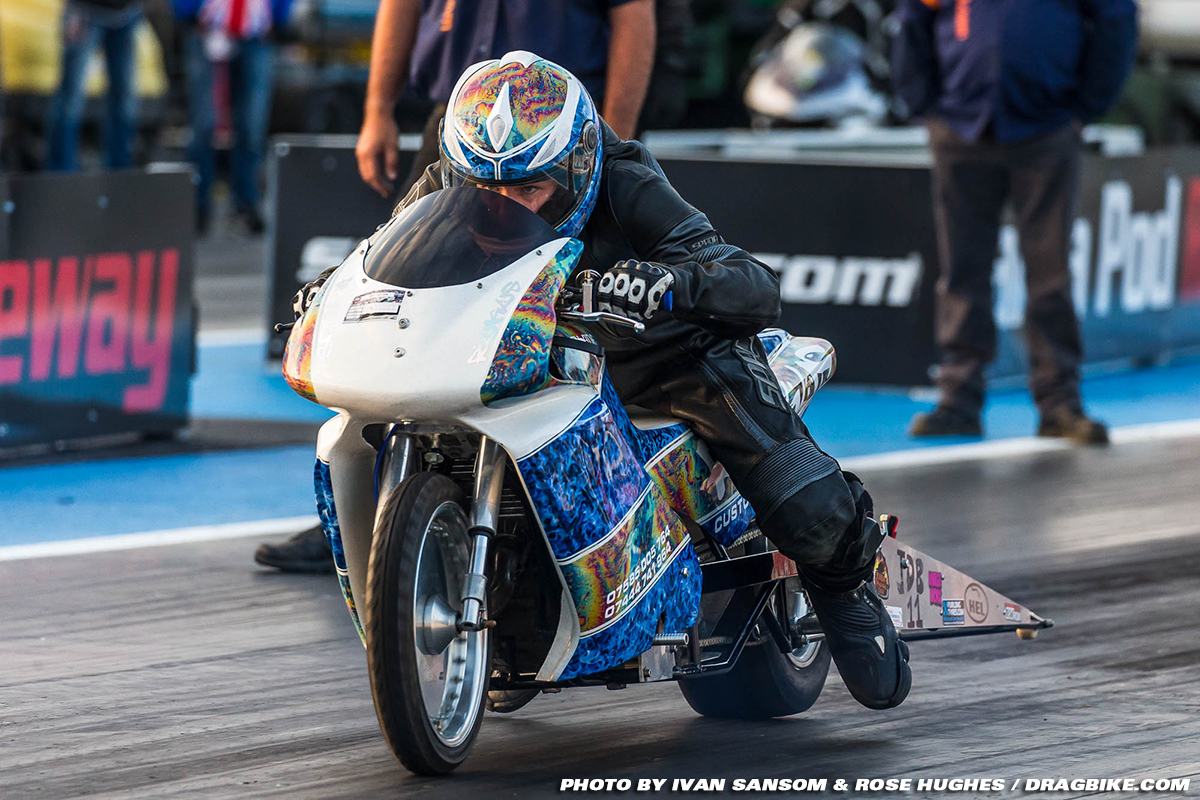 Surprisingly only three entries were made in the second round of the inaugural Jr Dragbike Cup series, with Meggie Talbot losing her points lead with a first-round loss to Liam Holgate who would then defeat low qualifier Blade Dummer who broke out, and probably should have checked over his shoulder as Holgate was struggling with gearbox problems in the final. All three are now on the same points tally with a long wait until the Cup series rounds out at the Euro Finals in September. 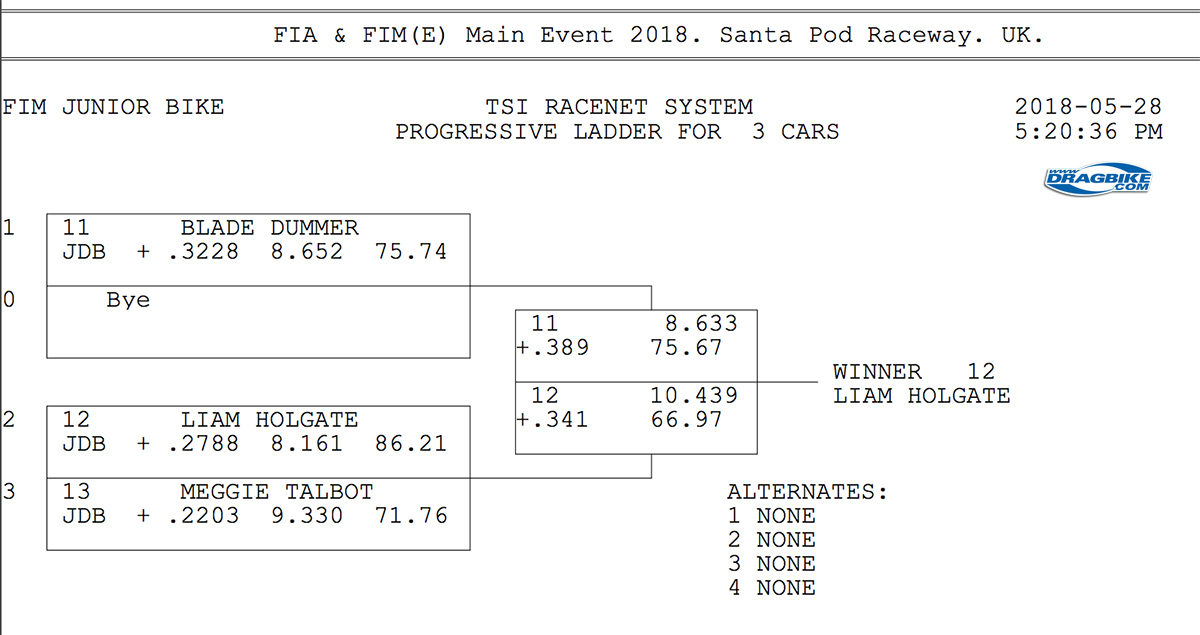