The Retirement of the Rocketeer

Words and pictures by Ivan Sansom and Rose Hughes

Indulge in a spot of bench racing with many of the top drivers in the nitro-burning ranks and occasionally the subject of just who is certifiable in the drag racing community, it’s the fuel bike riders that are inevitably pointed to. Understandable enough when you consider the TF and Funny Car gang are surrounded by a good few feet of chrome moly and don’t literally lie on top of a bomb separated by a thin layer of hide. The likes of McBride, Vantine, Wills, Gustafsson, Midgley, and other are united among the ranks of the two-wheeled heroes. However, once in a while emerge the truly insane, those with a desire to get their kicks from the results of passing concentrated bleach across a thin gauze of silver at high pressure… 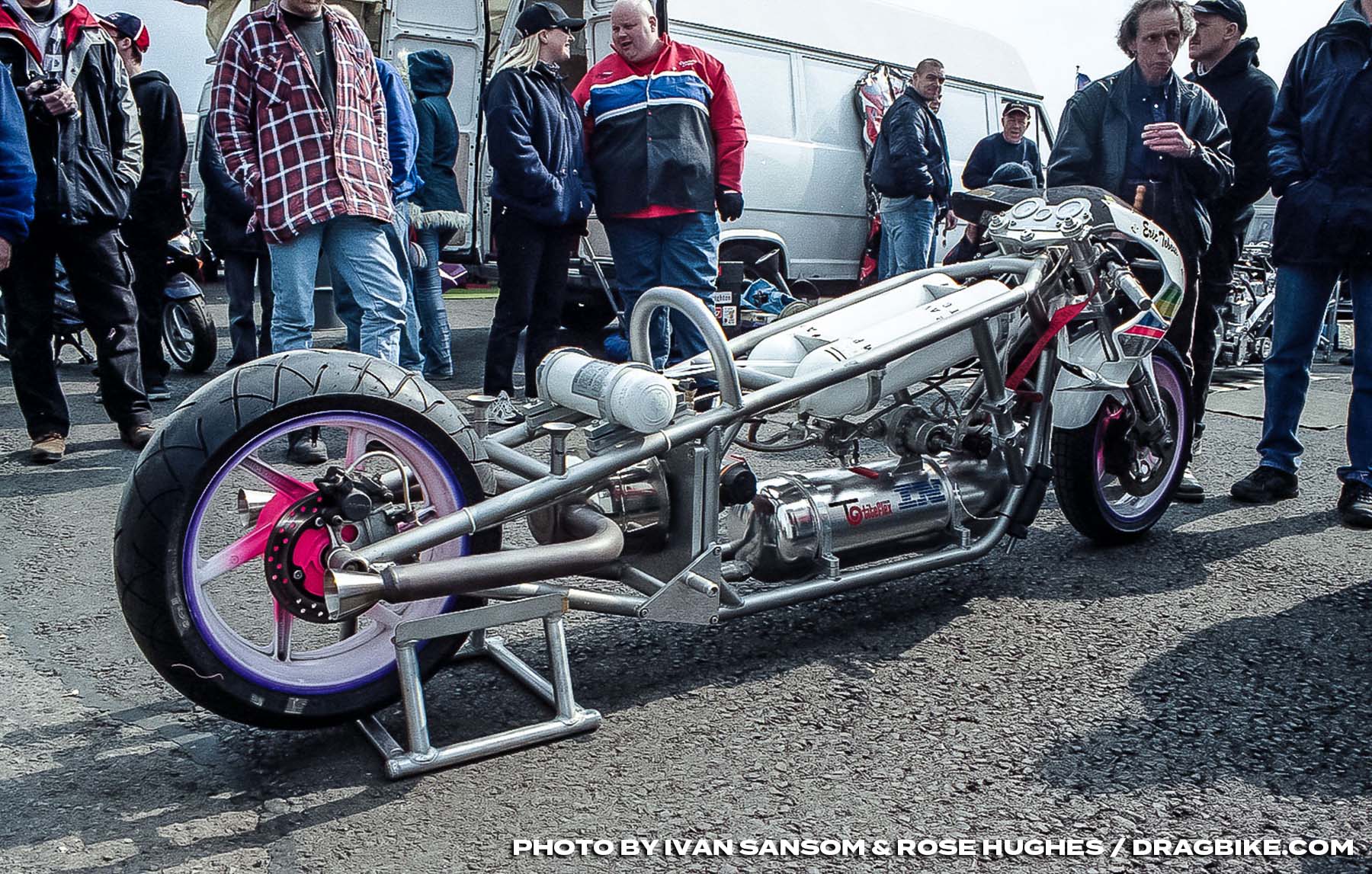 The history of rocket bikes extends back into the early seventies, with the infamous happenings of Larry Welch and Arvil Potter. Others brave enough (or crazy enough) to take up the challenge included the late Dutch playboy Henk Vink who put in a number of passes in Europe onboard his H2O2 bullet in the mid-eighties – Vink never managed to reach the full potential of the bike, despite running a 6.465@214.28 best at Mantorp Park in Sweden – and Australia’s Rosco McGlashan. And that was pretty much it until the plans of Frenchman Eric Teboul have come to fruition.

Teboul, a resident of sunny Cannes, more famous for the artificiality of movie stardom, has been a prominent member of the European drag racing tour since his 1985 debut on a fuel bike. Since then Eric has built and ridden two newer fuel bikes, his last Top Fuel ride making it’s debut back in 1995, and held both ends of the European record at 6.48 and 216 mph shortly afterwards. At about the same time, Teboul started hatching plans to build the ultimate in two wheeled acceleration machines. The frame was made up by road race guru Nico Bakker in 1997, with the late Sammy Miller providing the hydrogen peroxide motor in 1998. The reaction pack had previously done time in Miller’s road going Camaro, just to provide a bit of extra zip when Slam’n Sammy felt the need to outrun New Jersey’s finest on the Turnpike.  With a complete front end from a Suzuki GSXR750 and rear brake from a Honda CBR900, cloaked in a swoopy glass fibre body by Jos Schurgers and completed with a suitably dramatic paint scheme, the bike weighs in at a flyweight 170kgs. The power produced by the peroxide motor gives a mind-boggling power to weight ratio. Two aluminium compressed air bottles (at 160 bars) mounted in the top frame rails proved the charge to the underslung 22 litre H2O2 tank. During early testing the peroxide has been forced into the catalyst chamber at gradually increasing pressures from 40 to roughly 49 bars. 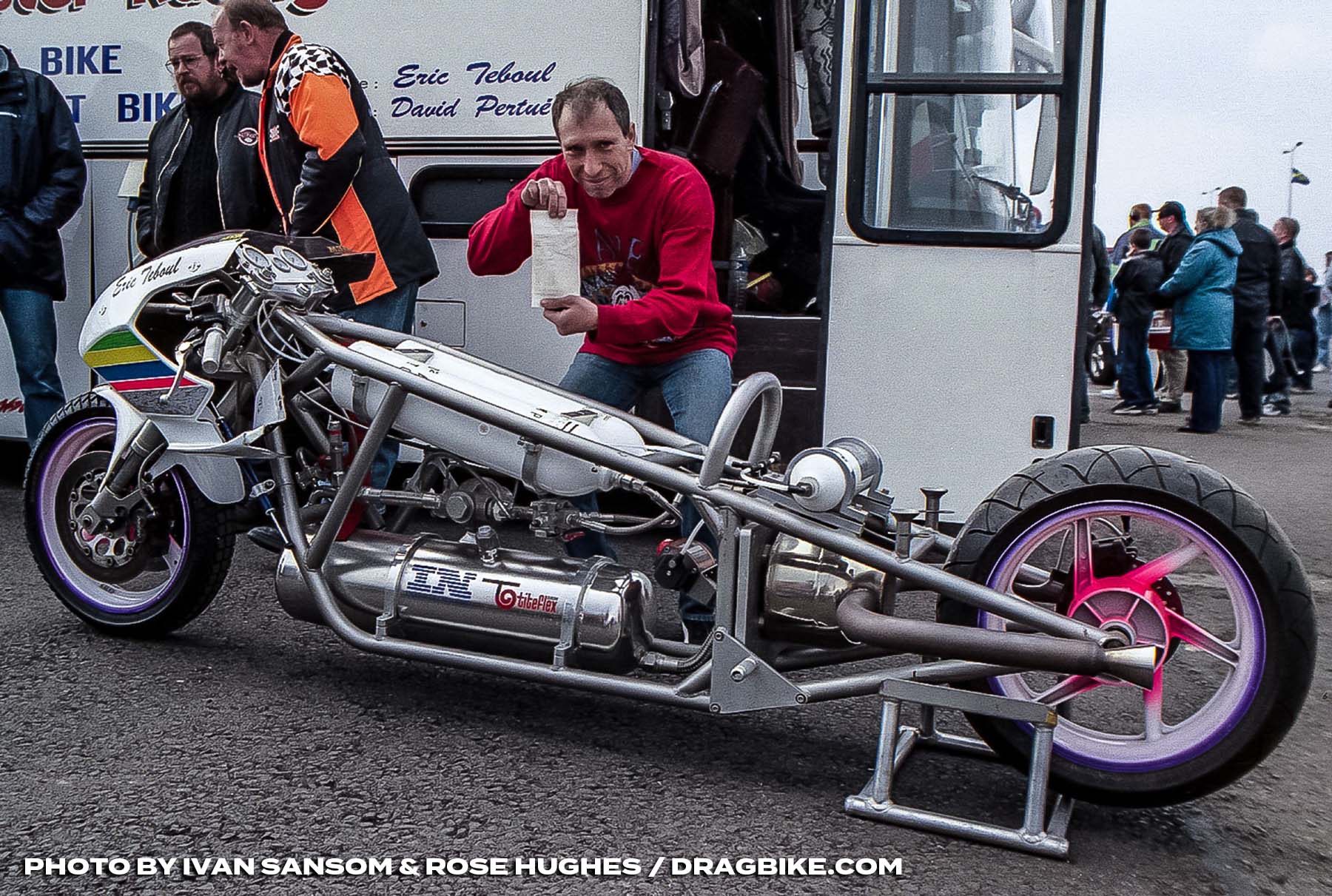 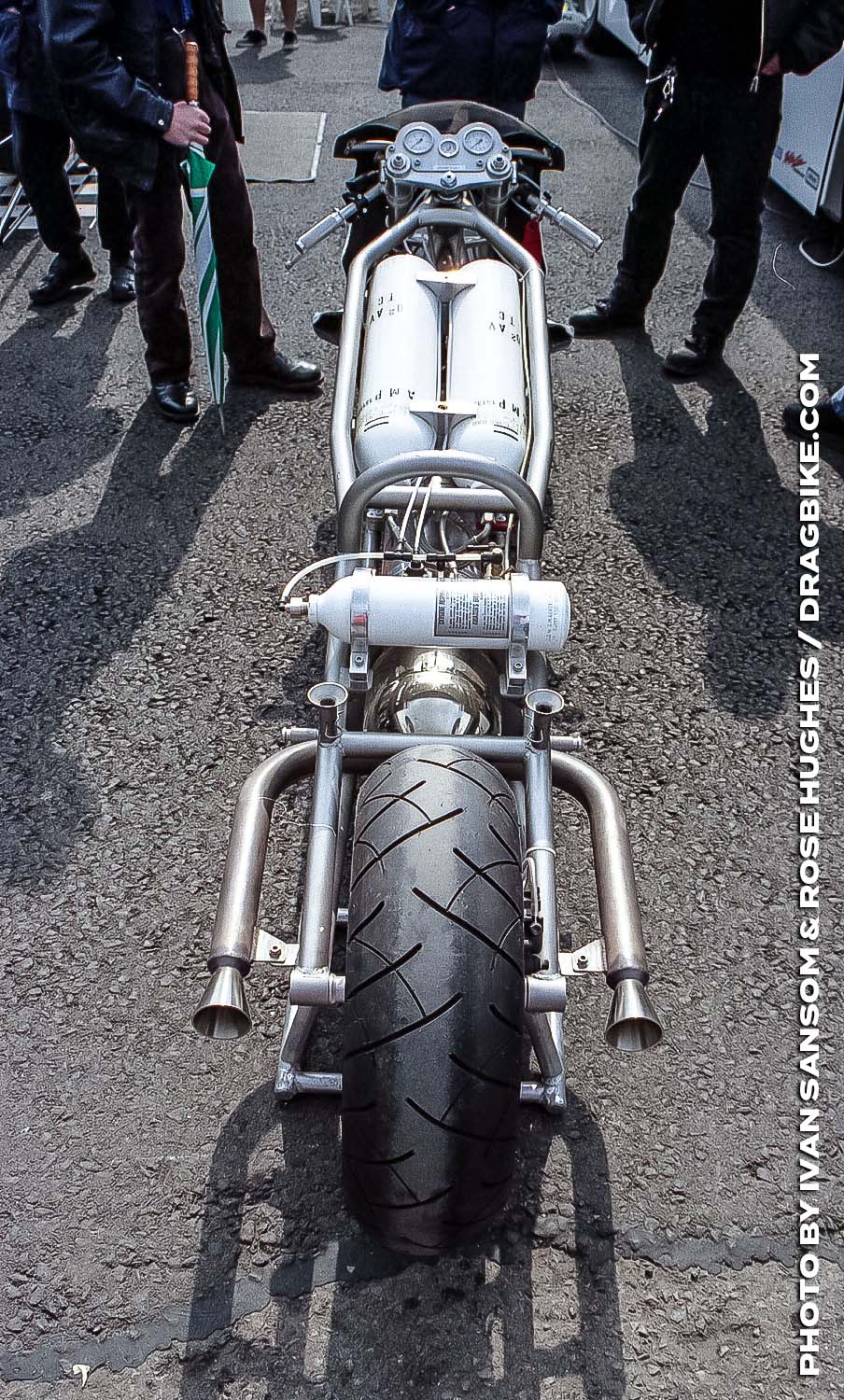 Looking over the bike it is clearly a well thought out machine, superficially similar in appearance to Vink’s mid-Eighties ride (also a Bakker frame and Miller catalyst pack; Teboul has benefitted from input from Vink’s co-consiprators Jan Smit and Jos Schurgers), but differs in a number of notable points. “The bike has a motorcycle rear tyre, Vink’s bike had a car slick which took some control away and caused problems on braking,” points out Teboul, “We have also two compressed air bottles, Vink only had one, which means we can run under power for longer and at higher pressure”. When asked in 2003 how do the fuel bike and the rocket bike compare, Teboul smiles “the fuel bike is fun, you know, fun to control, the rocket runs straight and I have to concentrate on staying on. The big problem is the bike is so light and is difficult to stop, but there are no mechanicals to worry about”. So how does a run actually feel? “The first test run at Orgéres… the start threw my head back, but now I am ready for this, most of the pre-race preparation is in my head, focussing on the run. The bike is very quick! I don’t actually see the track until the power stops, and then I concentrate on stopping”. Errmmm, did you just say you don’t actually see the track? “No, it is very quick!” the sparkle in Eric’s eyes twinkles just a little brighter. 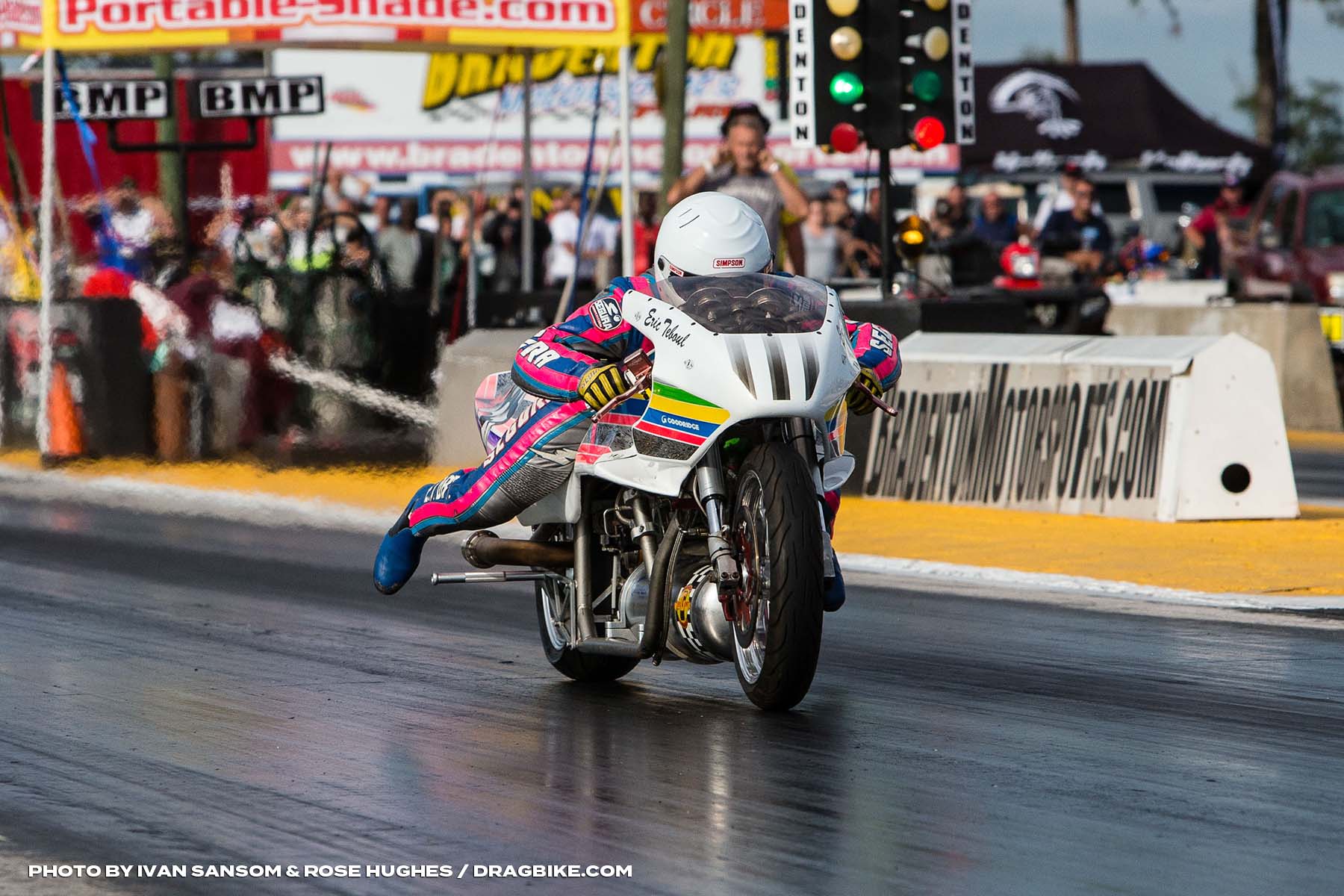 The performance marks got a further nudge with a couple of test runs in the six teens at Santa Pod over the Easter weekend in 2003. Running with a catalyst pressure of 45 bars, and not being that sure of the stopping distance available, Eric set an eighth mile mark of 3.889@203.26 mph on his way to a 6.174 at a slowing 181.05 mph. These two test runs at the Easter meeting were particularly poignant, as Antony Billinton, Sammy Miller’s long time right hand man in the UK, relayed the runs to Miller’s son little Sam via mobile phone.

Eric had an avowed aim of running a five at Santa Pod, the home of many of Sammy Miller’s record setting runs in the Vanishing Point and Oxygen dragsters, and was able to set a new best at the Speedfreaksball on the 10th of May 2003. With the boost tweaked into the 48-50 bar range, the tension of the first run was heightened by a couple of breaks for rain flurries with Eric waiting on the startline. Given the all clear and the traditional countdown 5-4-3-2-1 Go! And Eric was gone, boy was he gone, the bike flying to the 60 foot mark in 0.985 seconds, 330 feet flashed by in 2.521 and the eighth in an otherworldly 3.714@207.84. Power cut at the 240 metre mark and Eric ‘coasted’ into a stiff 15 km/h headwind over the finishline with a stunning and historic 5.968@183.18, the first five-second timing ticket for a bike outside of the USA. 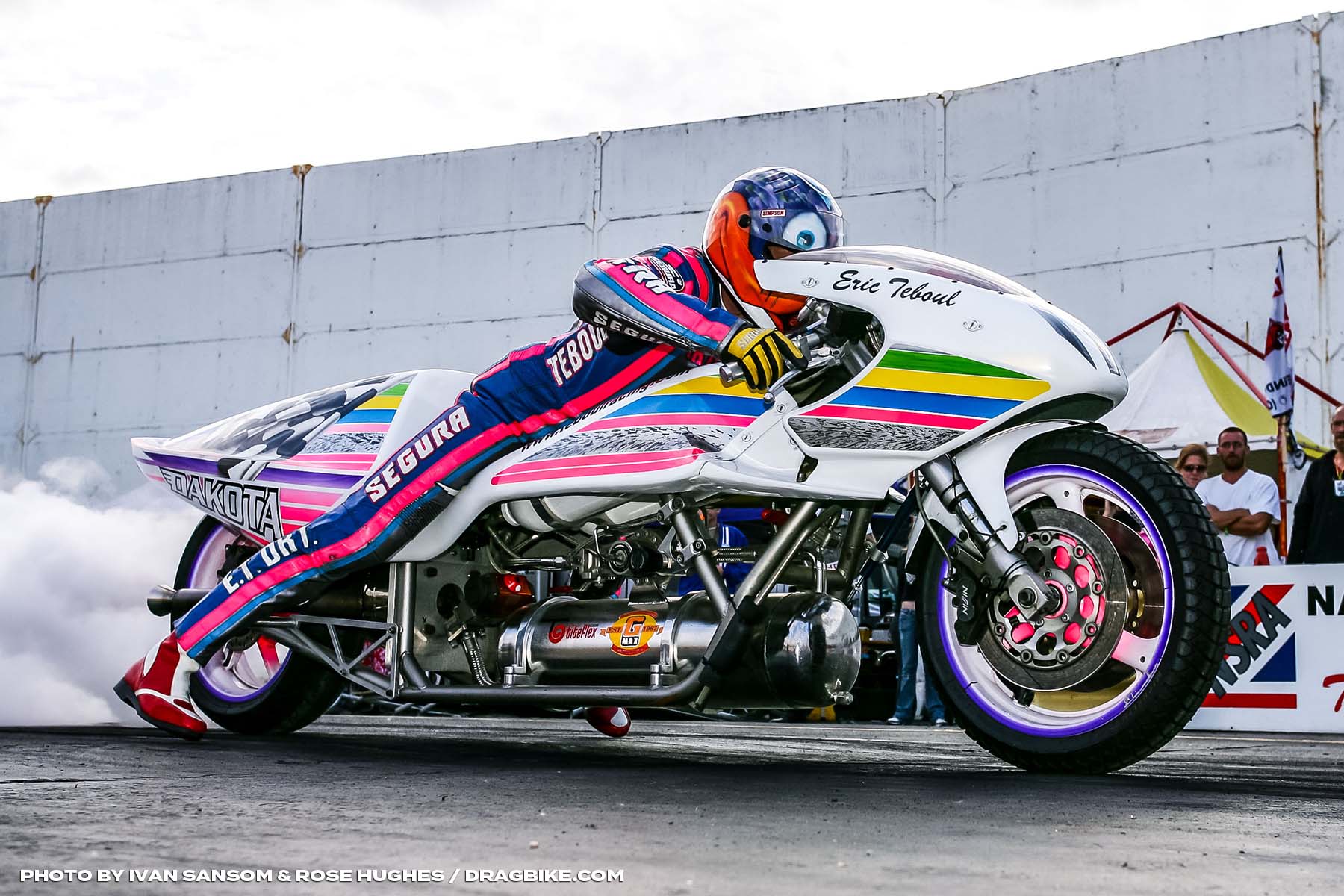 So just how fast can this missile go? Well, after only 16 passes, Eric has broken the five second barrier, owns the outright eighth mile mark, and is the fastest verifiable rocket bike in history (Welch’s 5.905 in 1974 has to be highly questionable at the very best). The initial aim of a five second timing ticket has been achieved on little more than a half pass, and the mind can barely conceive what the potential is when Teboul has a calm day and a long smooth shutdown area at a track like Hockenheim. Judging from the firmness of his handshake, Eric will be able to hold on for a 300 metre squirt (as delimited by the current capacity of the peroxide tank) and post a mid-five at some point soon. Beyond that? “Well, it will be quite easy to extend the frame and fit larger tanks if we want to run under power for longer” grins Eric. If you ever get the chance, make sure that you catch the truly amazing show that is the Rocket propelled Frenchman – you simply won’t believe it until you see it.

Update: So we are now in 2022, some nineteen years after we initially wrote this piece for Dragster Australia and Eric has decided to retire from the rocketry business. The intervening two decades (has it really been that long?) has seen Teboul astonish crowds across Europe with a brief foray to the USA at the behest of Jay Regan for the 2013 Man Cup finals at Bradenton. That trip yielded a then World’s best at 5.121s/264.39mph that astounded the assembled audience (with none more surprised than the Bradenton safety crew who saw Eric working the brakes hard to get the missile stopped). 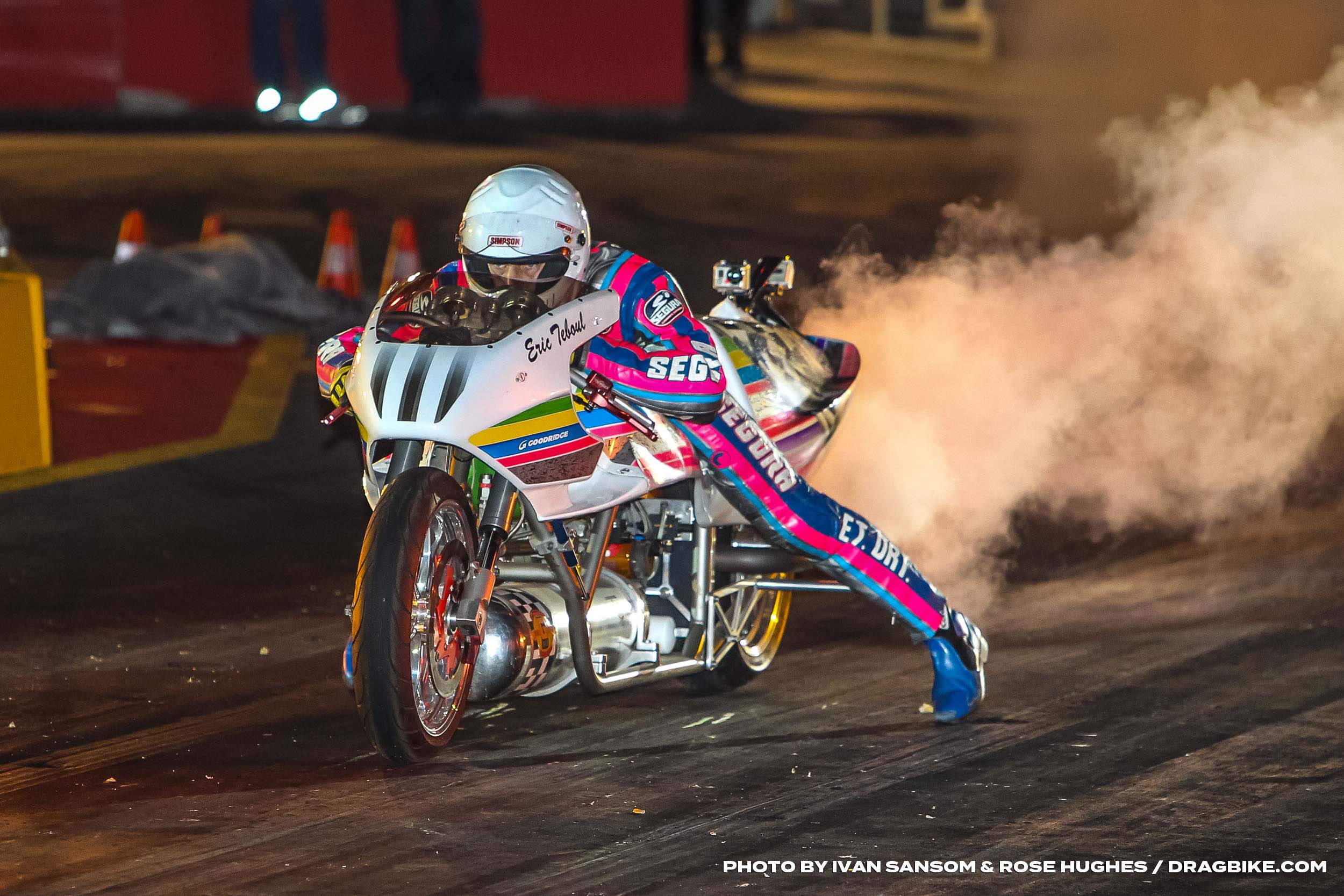 Back in Europe, we’ve almost, dare we say it, gotten blasé about the show as Teboul punted out low fives with a degree of consistency while upping the terminals as he worked out the parameters of what was possible with the extended push provided by the larger capacity fuel tank. However, a renewed focus came when the Frenchman announced that this year would be his last with the rocket. 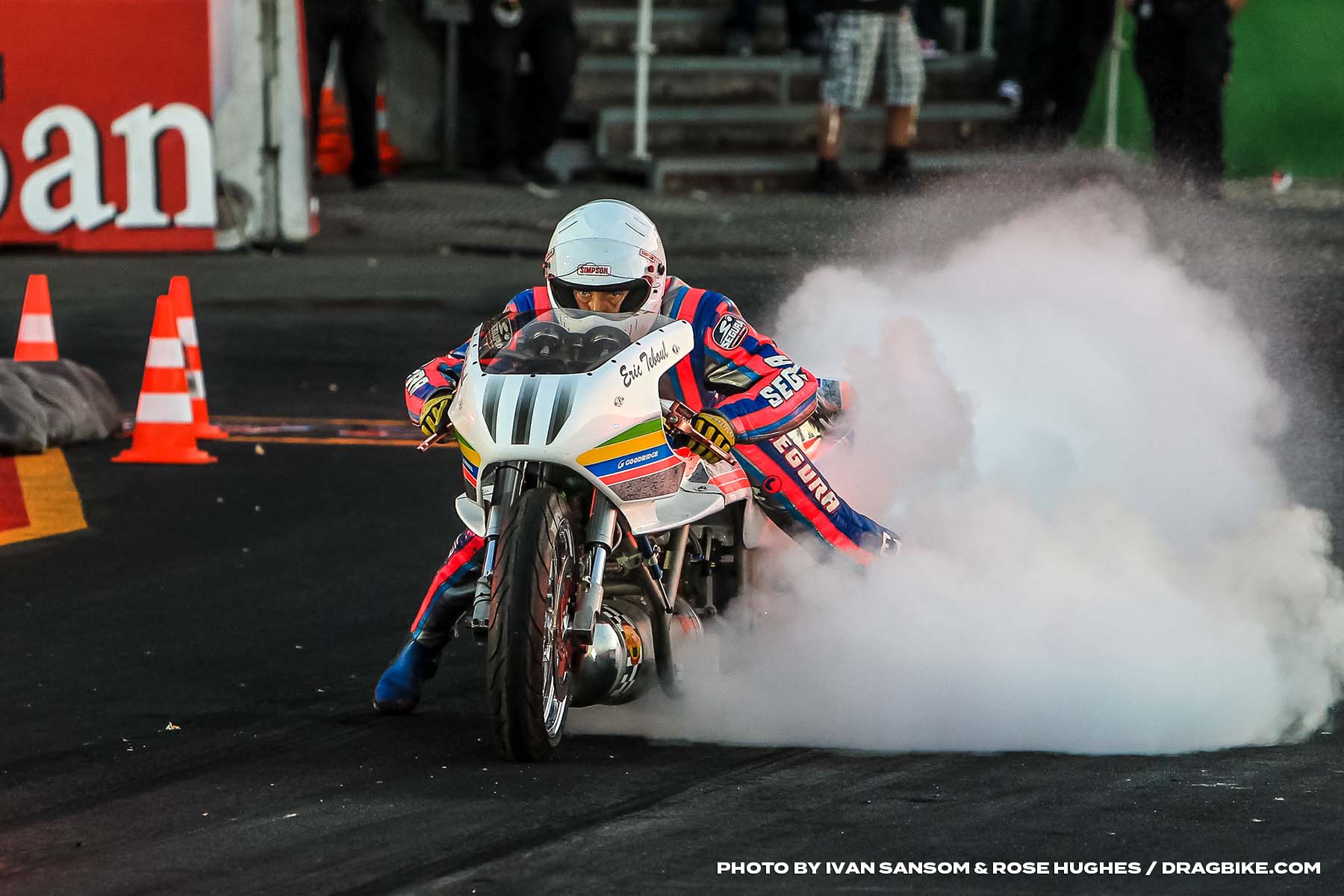 There was a fairly obvious target on the ET stakes potentially in reach and a 5.1754 at Santa Pod in May was followed up by a 5.123/261 at August’s NitrOlympX in Germany were nudging back towards the hallowed ground. That venue would prove to be back at Santa Pod for the European Finals in September, the place where many of us used to go to worship Slam’n Sammy and his array of rocket cars as he set the timing clocks alight in the 1980s (including the ultimate quarter mile drag strip record of 3.58). 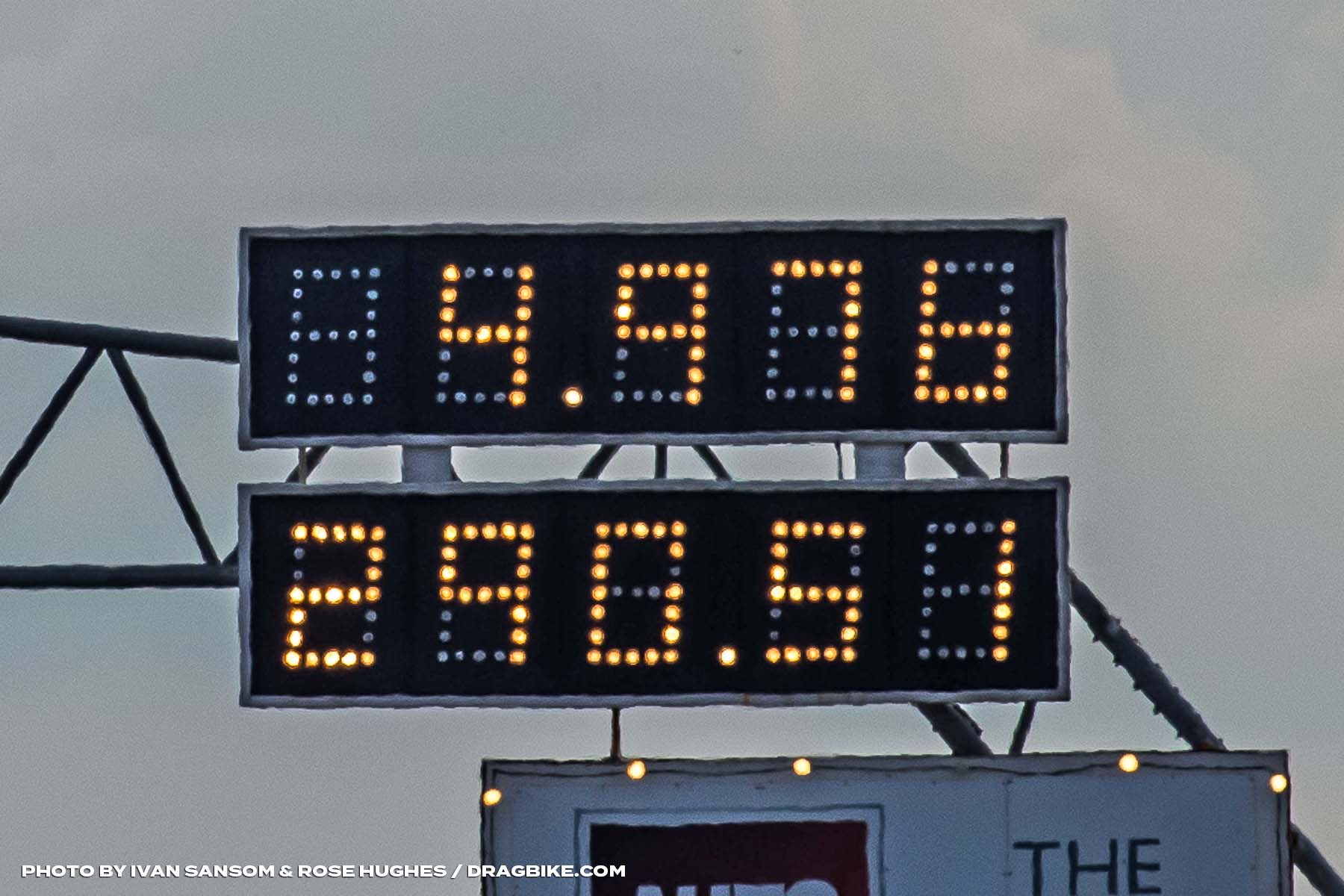 Rain and other track delays put paid to an initial run on the Friday, but Saturday saw a 5.0681/263.52 uncorked and meant Eric rolled out for his career ending pass on the Sunday in front of a huge and hushed audience. No pressure then. A brief exchange with Teboul beforehand “a little bit more?” “yes, a little bit” with a grin. The extra litre of peroxide pushed Teboul to a barrier busting 4.9766/290.51 which proved a bit of an adventure to stop but the internet was alight by the time he rolled gently into the dirt at the end of the track. History achieved. 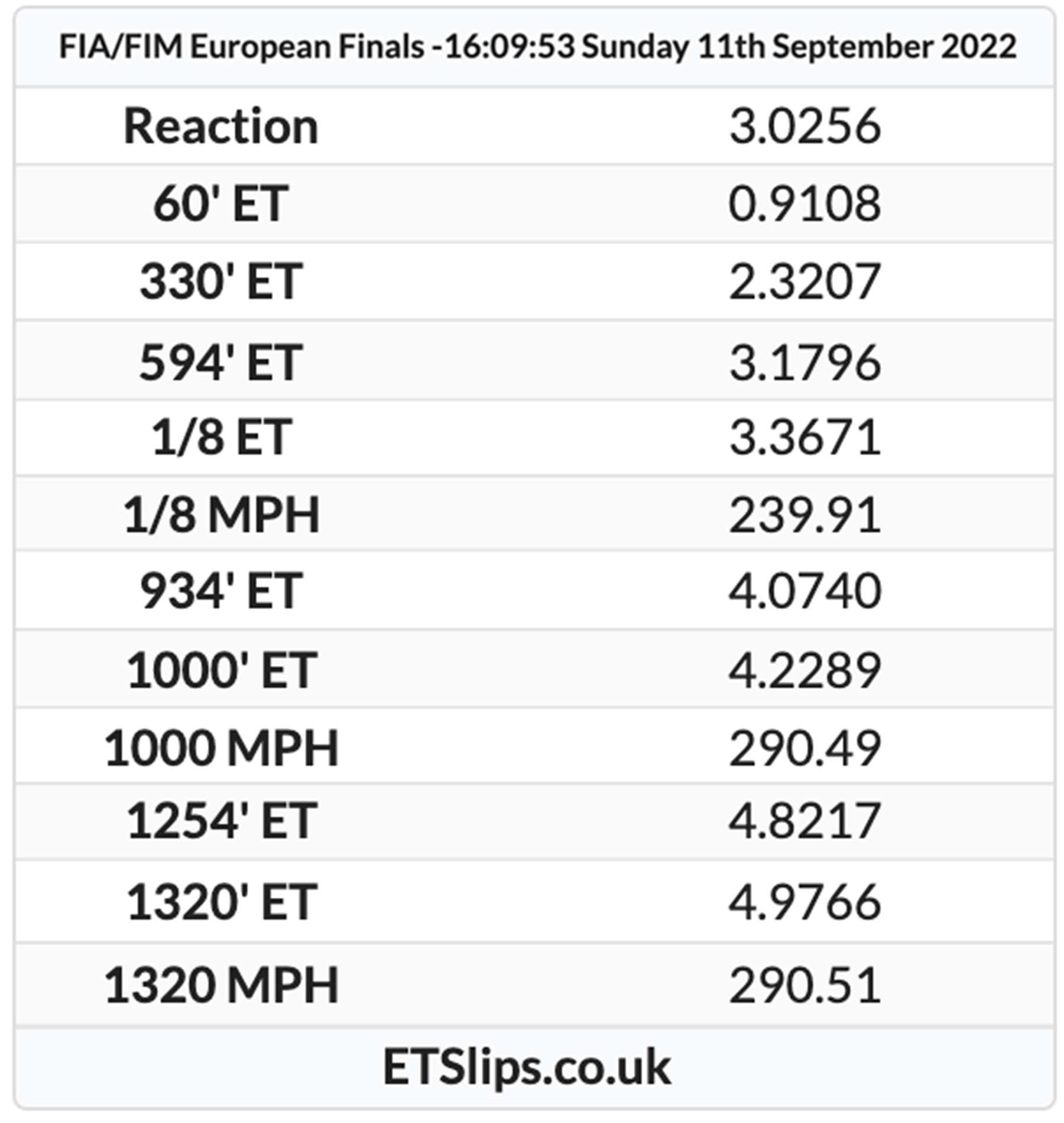 Next step for the rocket bike? Well, it is up for sale but it could take some time before we see anything approaching these numbers. Notwithstanding where it ends up next, being on site for that first four second run on two wheels was a truly memorable blast. Merci Eric, it’s been fun! 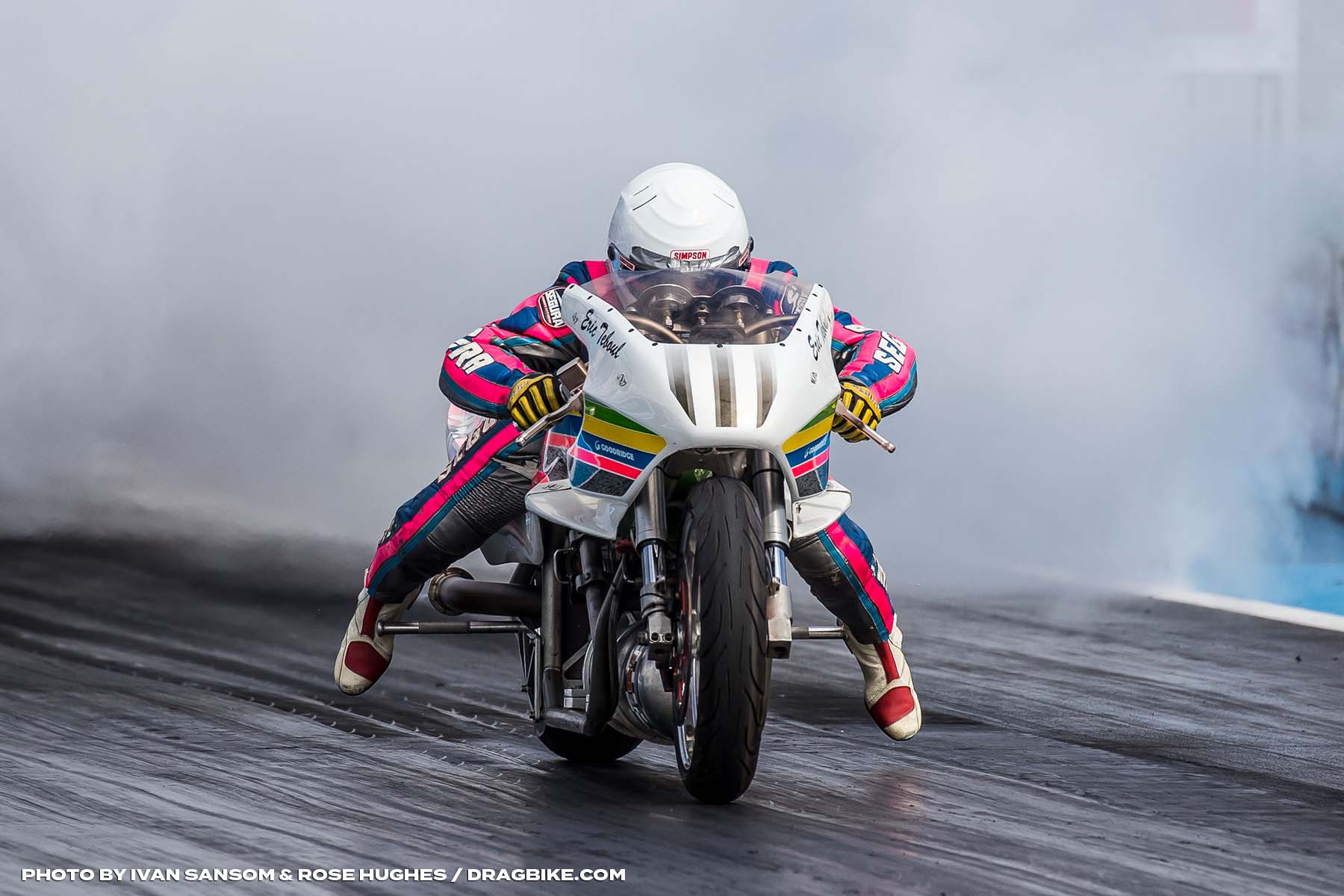 Click here to read the full coverage from The Euro Finals