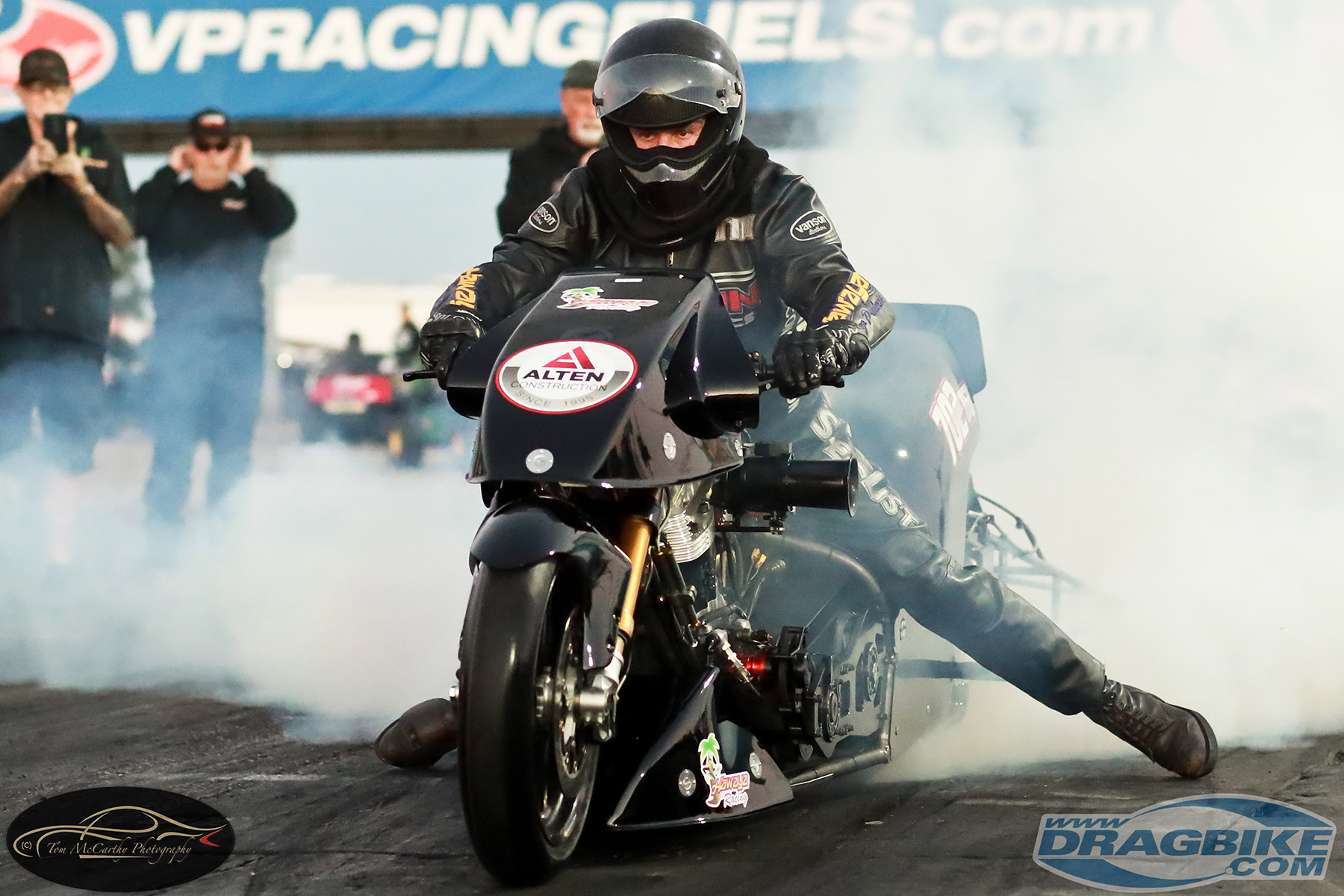 On November 13-15, 2020, at the AMRA Jim McClure Top Fuel Harley World Finals, twenty-five nitromethane burning fuel bikes entered the fray, with ten of them being Top Fuel Harleys. And one of them was brand new. Built by Johnny Vickers and his talented crew at Hawaya Racing, veteran fuel racer Tim Kerrigan was ready to make the maiden voyage. 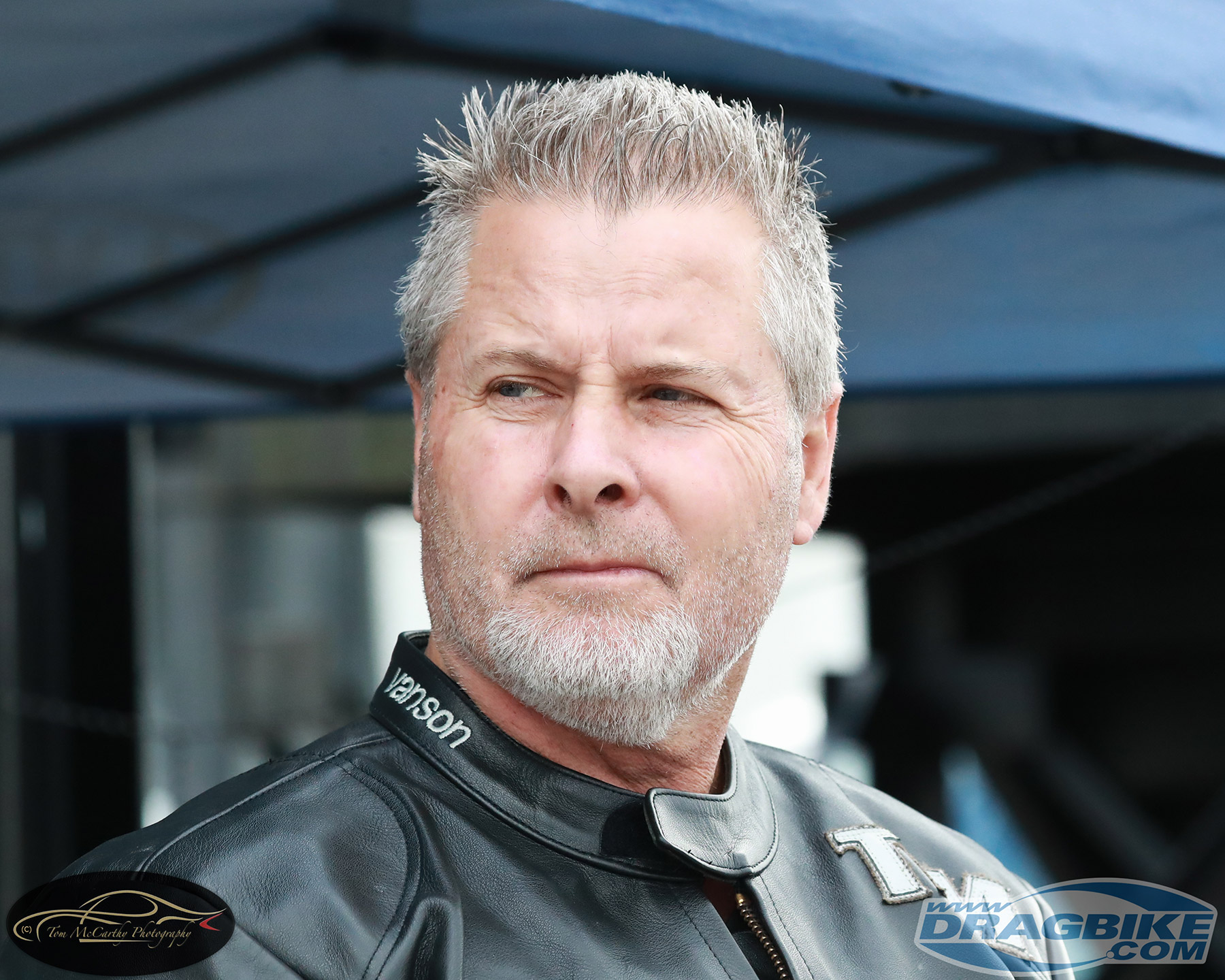 Kerrigan clocked in with a solid 6.73 @ 198 MPH on only its second pass down the Rockingham quarter-mile during qualifying.

Later that day, the team encountered a faulty clutch canon that would take them out of competition for the weekend. But to qualify 6th in an eight-bike field bodes well for Tim Kerrigan Racing (TKR). 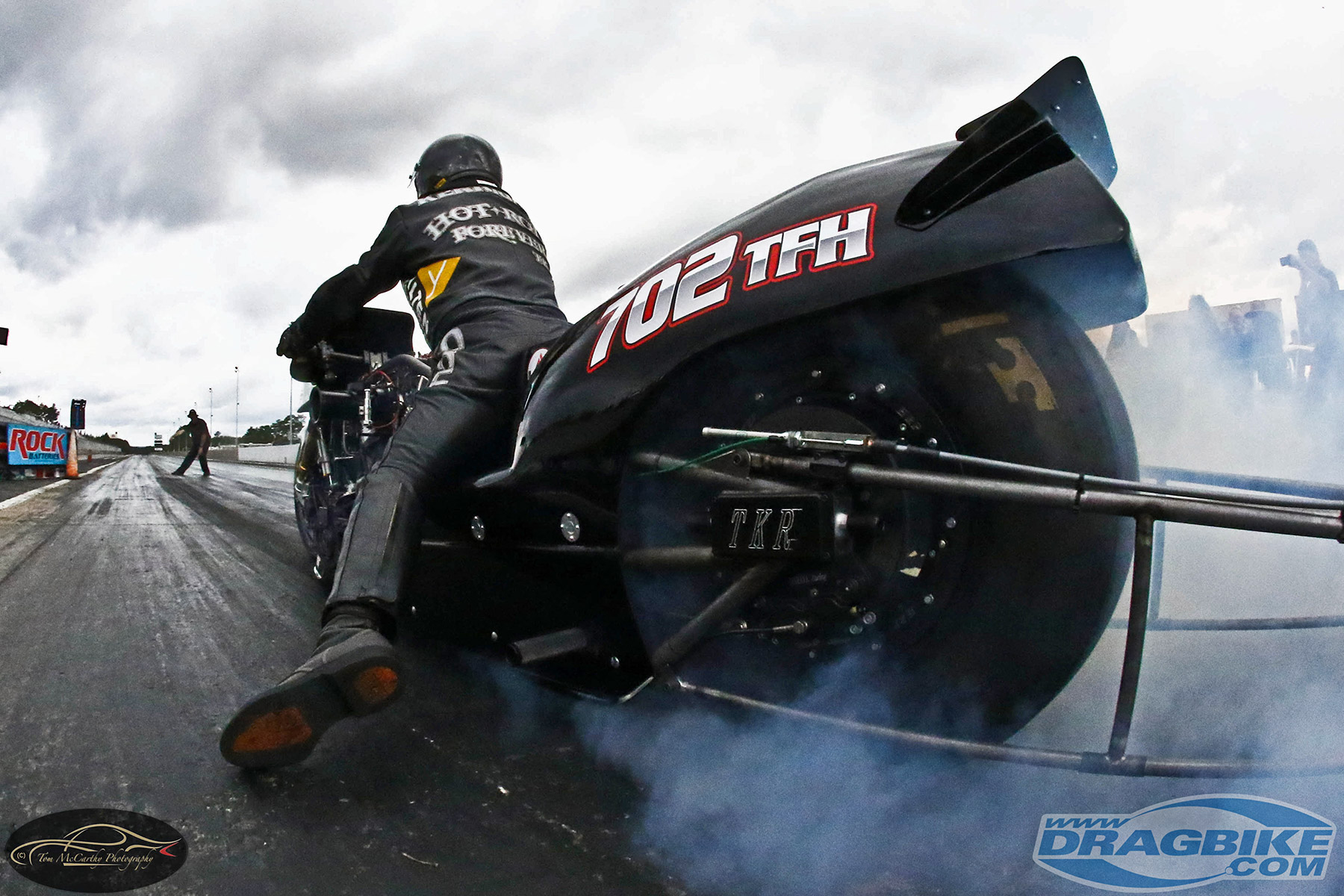 Tim is a 57-year-old painting contractor, from Novato, CA, with a love for fuel bike racing. Tim began motorcycle drag racing in the early 1990’s and moved quickly from the street/strip bike racing to quicker motorcycles in HDRA competition. Some of his previous competition classes include HDRA Pro Stock, Pro Gas, Pro Fuel (#1 plate in 2000/2001), and he then progressed to Top Fuel Harley. 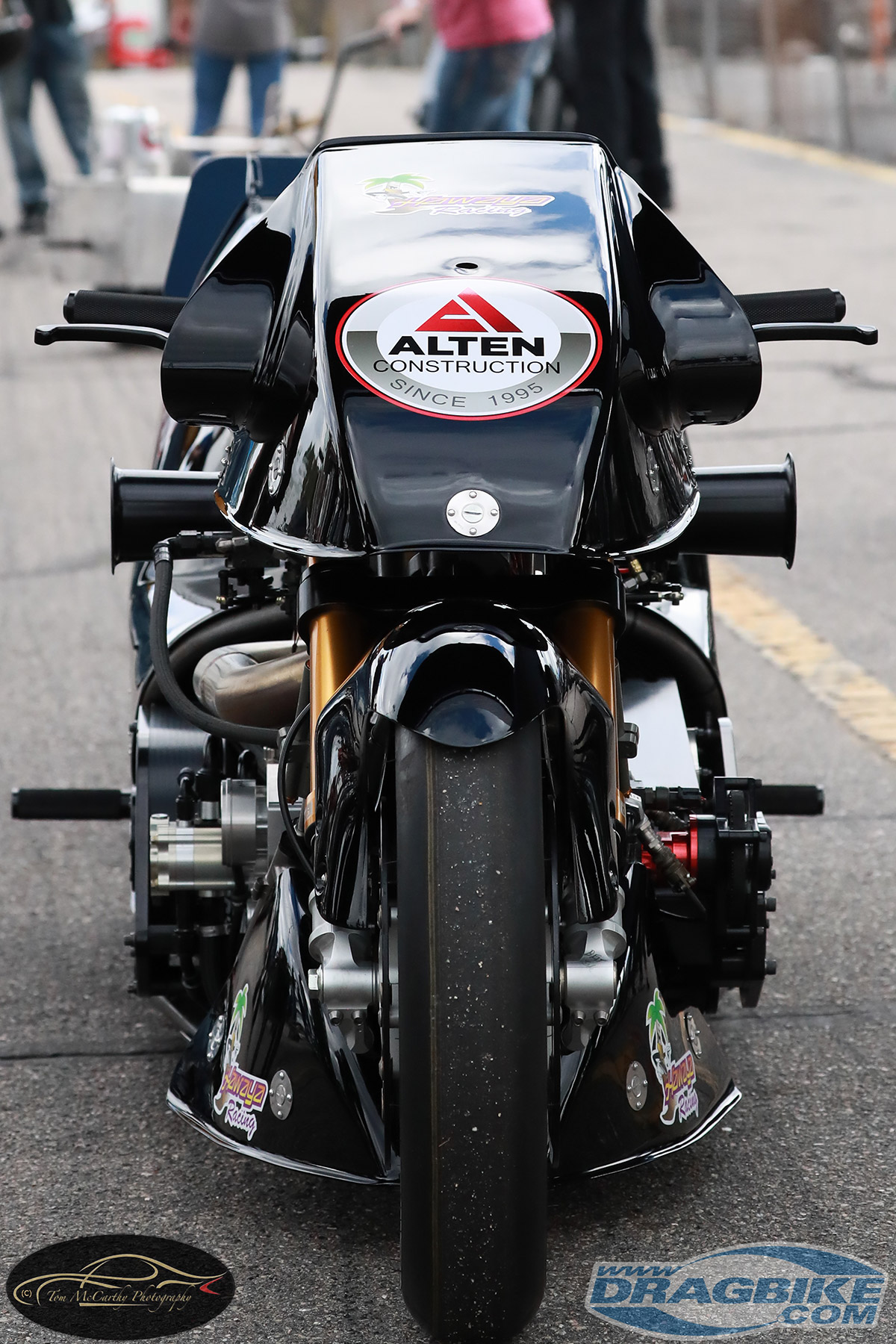 Why? “Because I like to go fast and I love the class. Not only that, I was friends with Jim McClure, one of the greatest ever to race Top Fuel Harley, and he inspired me. I also love the challenge of racing at this level. I want to go real fast and race with and against the best of the best,” said Kerrigan. 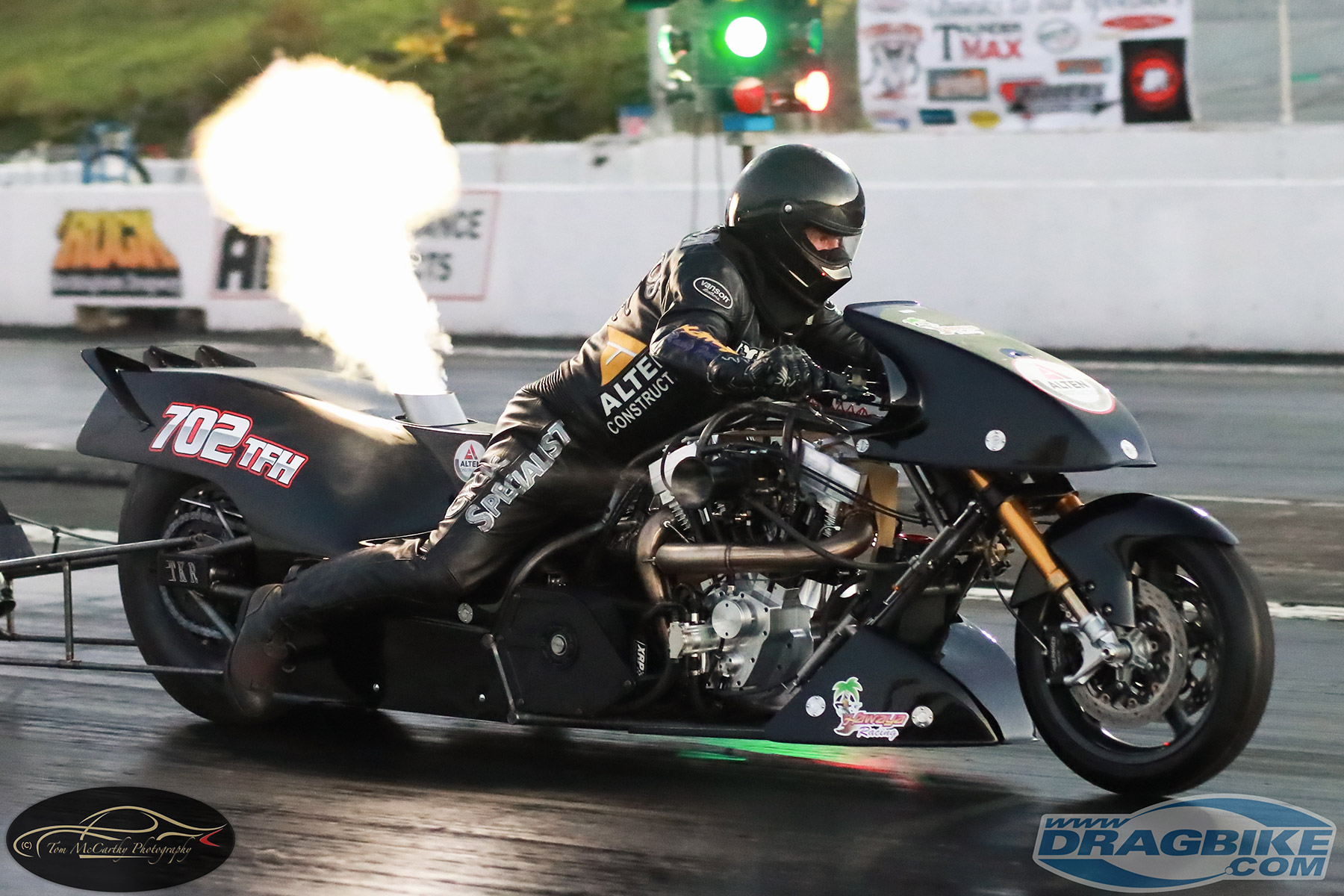 Johnny Vickers and his staff have handcrafted Kerrigan’s new Top Fuel Harley at Hawaya Racing Products (HRP) in Millers Creek, NC. This is a frame rails up creation by HRP. Master chassis fabricator Pete Browne created 65% of the original chassis on Kerrigan’s bike, with HRP completing the remainder. New jigs and fixtures have been made to replicate this chassis with CAD drawings and digital tube bending utilizing the latest advanced fabrication techniques. Johnny Vickers commented, “Every tube can be replicated and replaced if need be; they all have individual part numbers.” Vickers also mentioned, “There is over $1,000 just in raw 4130 chrome molly tubing alone, close to 400 feet of it. I’ve had a lot of ideas in my head, and this build includes many of them.” Johnny further commented, “The Terminator bike was a proving ground for many of this new bike’s ideas, like the inverted clutch.” 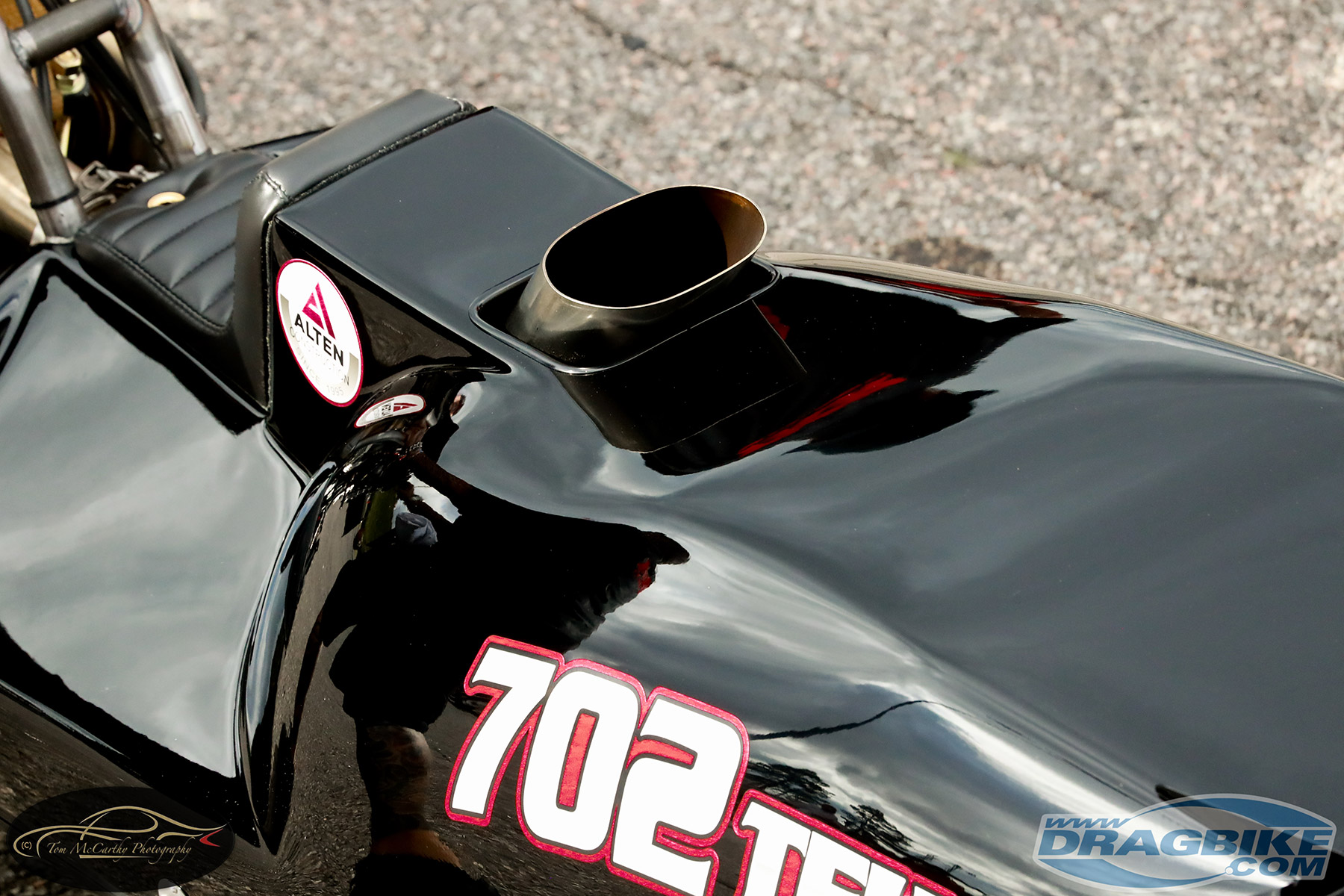 The finished creation debuted at the AMRA, Jim McClure Top Fuel Nationals and was an instant stunning attention-getter with it’s towering 4-foot flames spewing out from behind Tim’s rear seat. 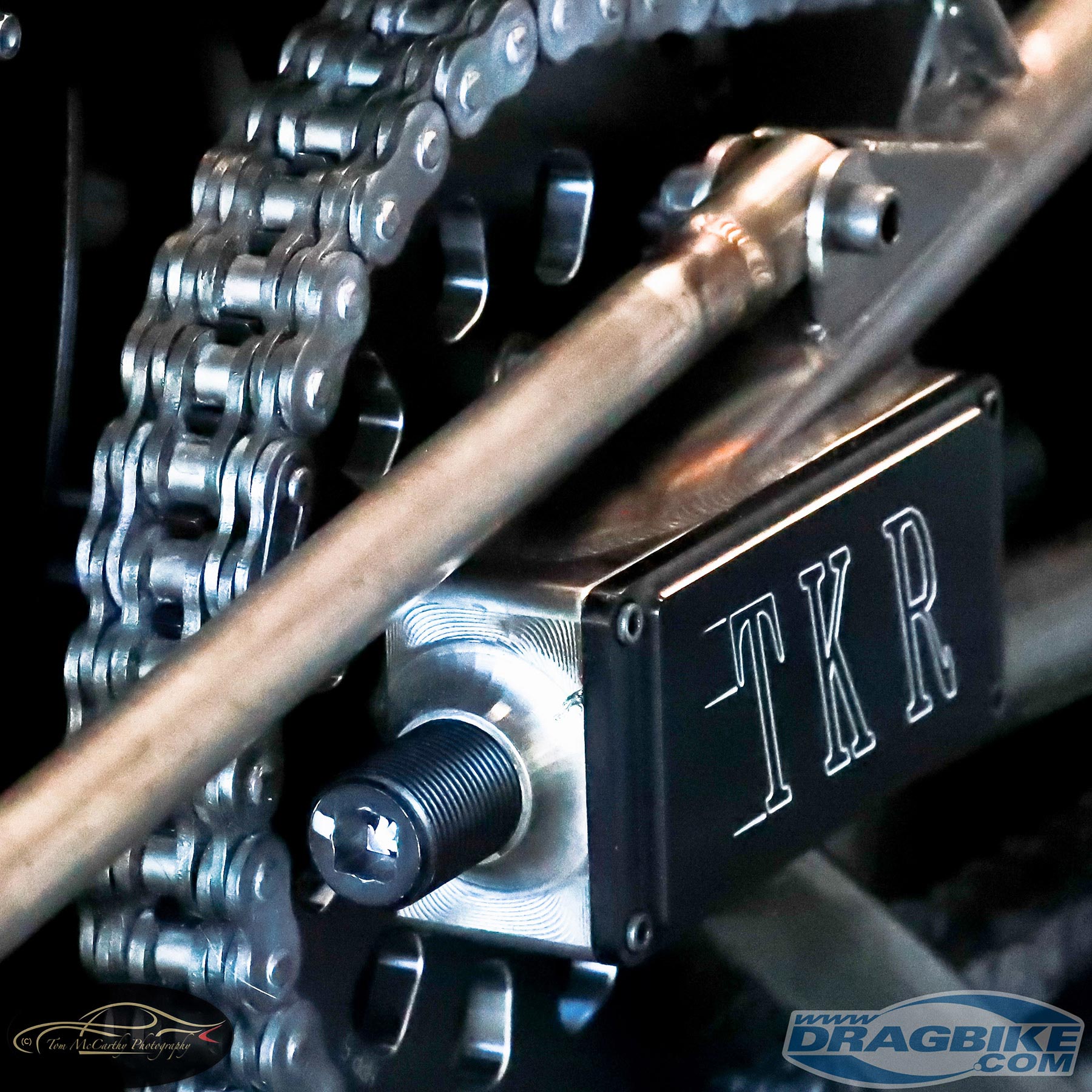 The Ohlin front end is state of the art and a 15″ wide HRP rear-wheel sporting a 14″ M/T Top Fuel Motorcycle rear tire, complete the roller with Ohlin brakes on the front and a carbon fiber rear set up by HRP, which most Top Fuel motorcycles incorporate into the latest builds. 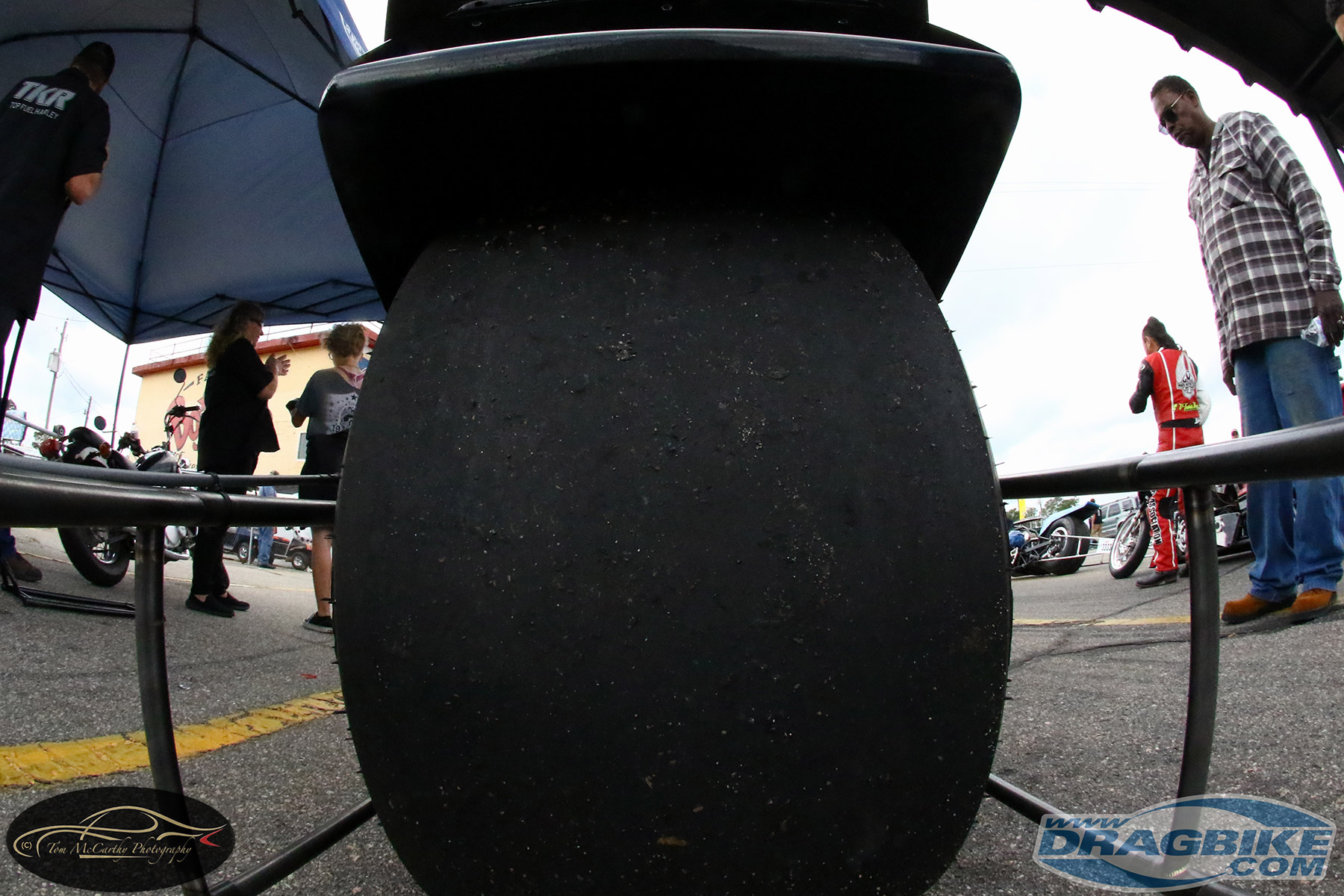 The motor is a new Hawaya Racing Stage II Derringer engine block, which features an extended cam chest height. The current motor configuration is a 4.800 bore by 5-inch stroke yielding 181 cubic inches of displacement. A 5×5, bore-square combination producing 196 CID motor will go in after testing of the new bike is complete in the near future. 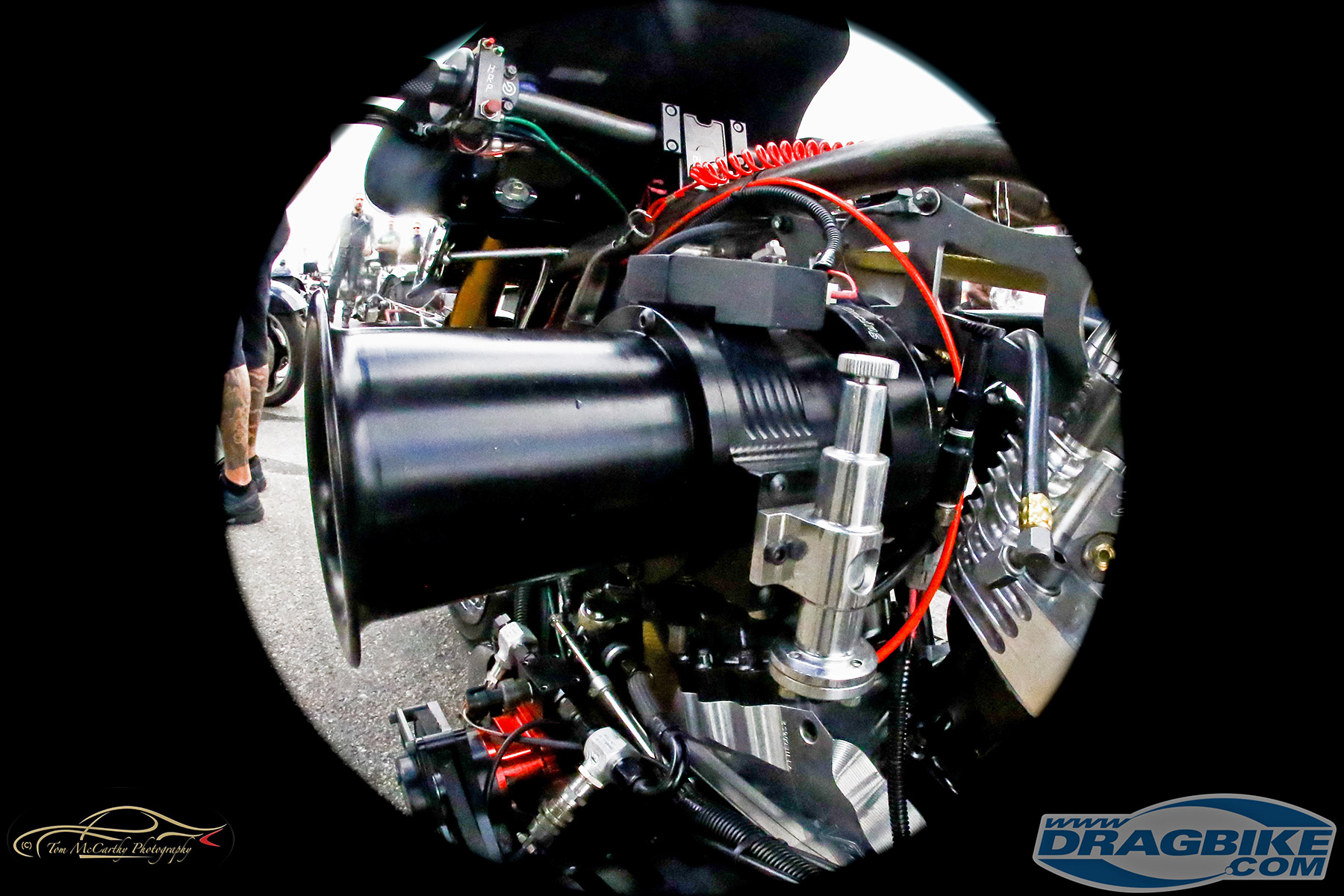 Cylinder heads are by Ultra Pro Machining. The connecting rods and lower-end assembly are by HRP, sporting Diamond pistons, a Waterman 18 GPM fuel pump, and an MSD Ignition system. 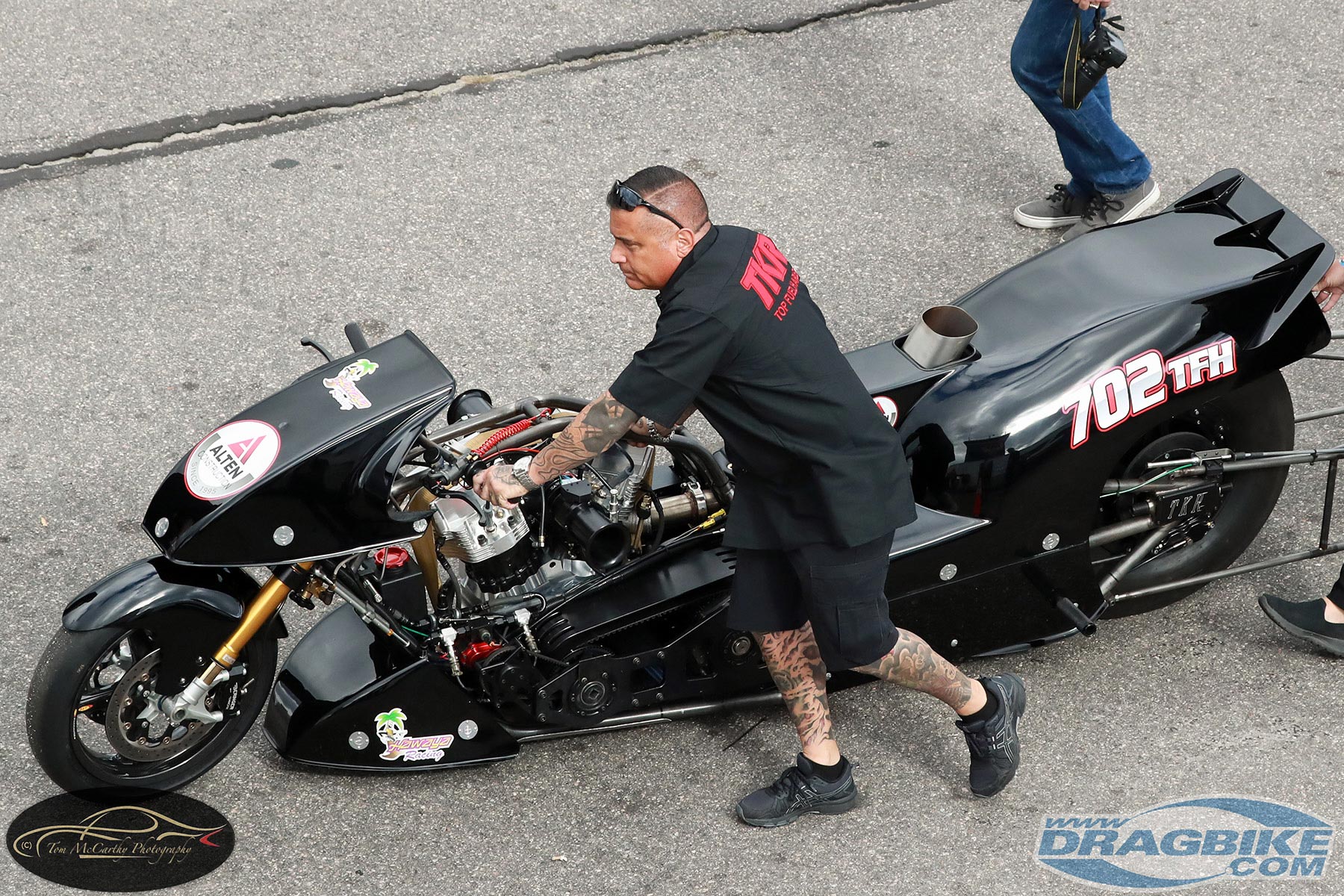 This is a direct drive power coupling, no transmission, and a 7-inch HRP clutch system handles the horsepower. With 6.70’s at 198 MPH on only it’s second full-pull, there is no doubt this bike will be a force to be reckoned with in 2021, and it’s show-stopping beautiful too. 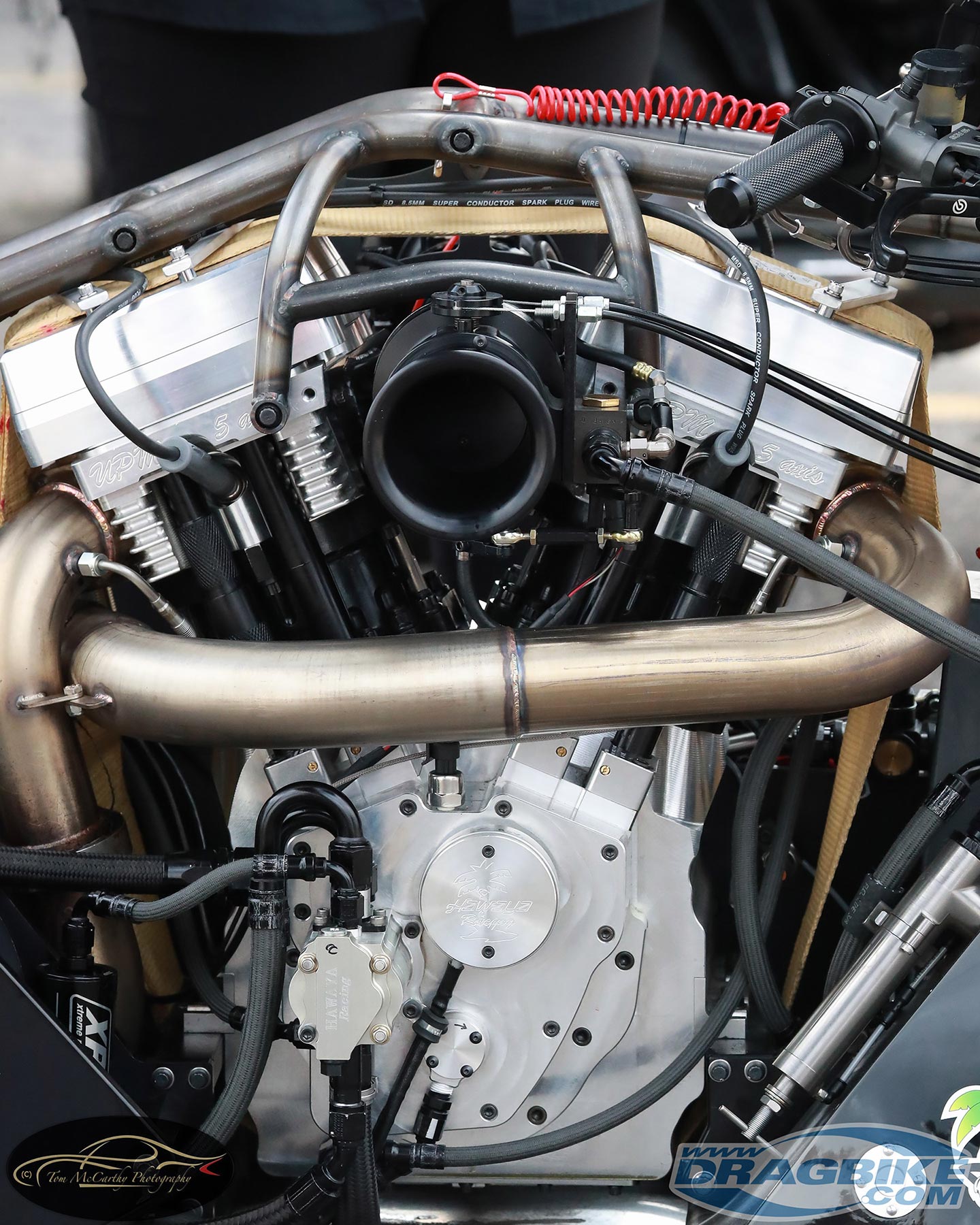 In 2021, racers and fans will see Tyler Wilson, who is no stranger to fuel racing, riding Tim Kerrigan’s previous Top Fuel Motorcycle.

Look for stunning performances by these HRP bikes in 2021. 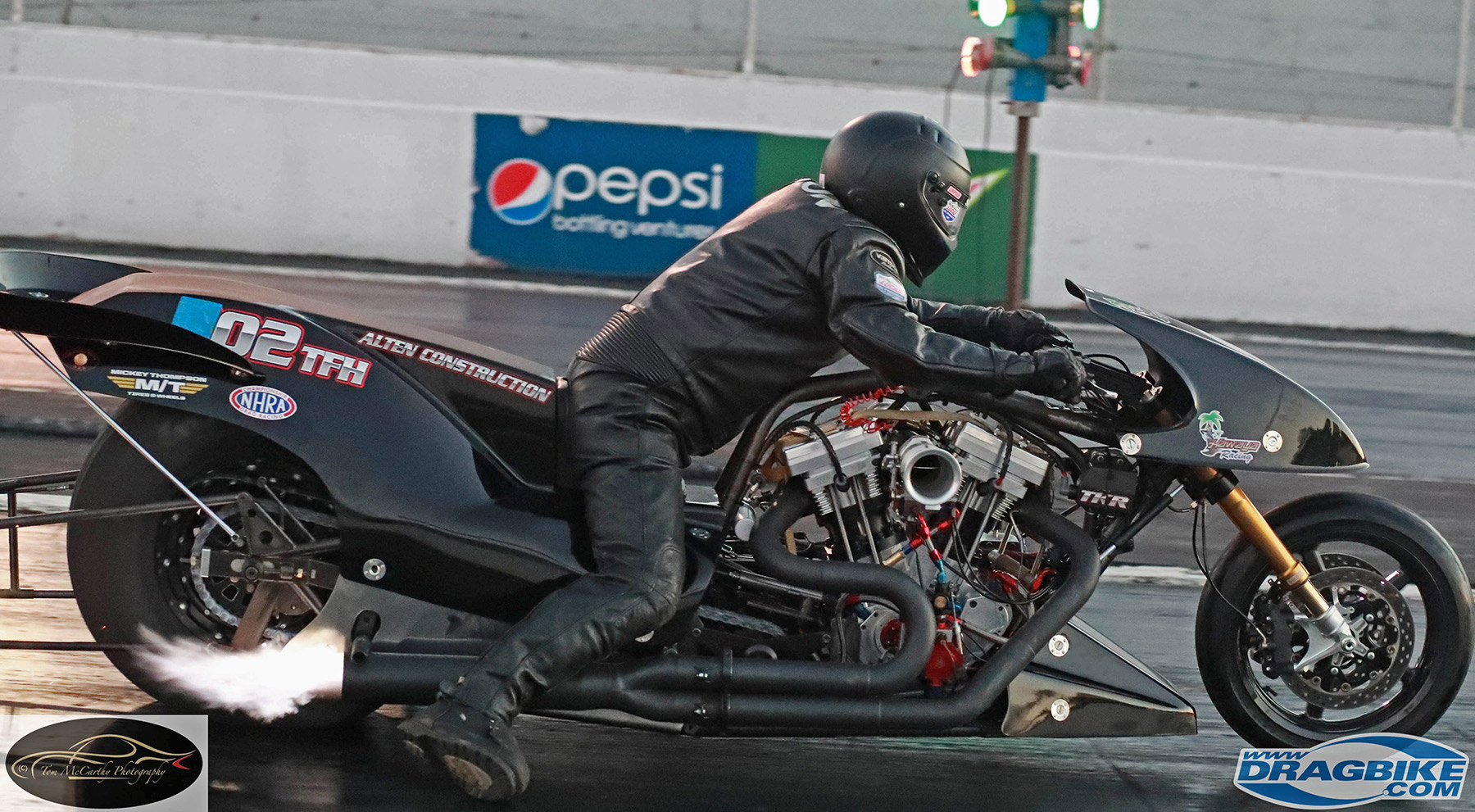 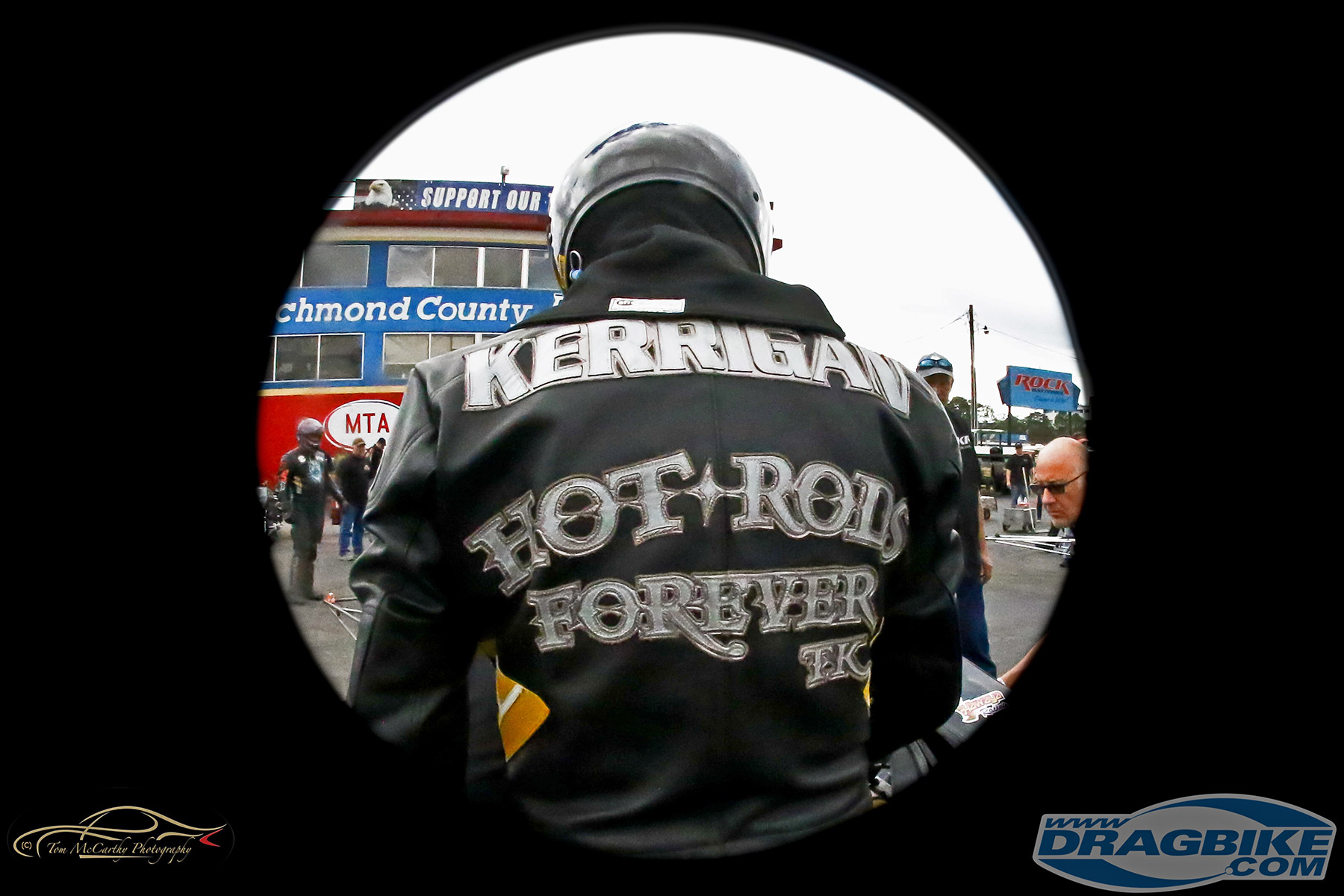