HomeTeam ReportsTLN Motorsports Did What???

TLN Motorsports Did What??? 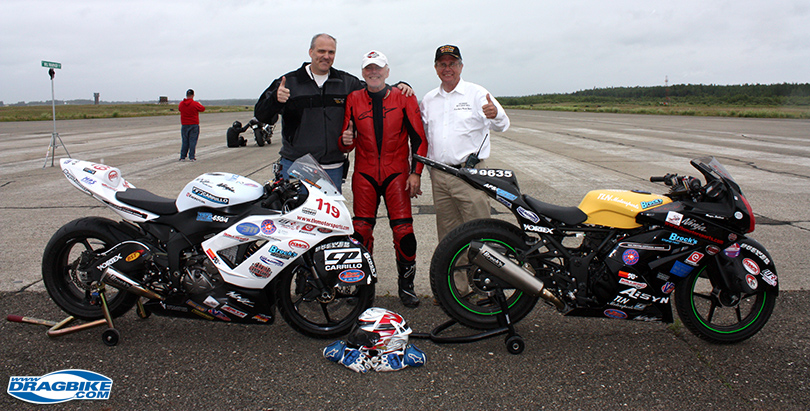 TLN Motorsports Did What???

This past weekend the land speed racing community made its annual July trek to the former Loring Air Force Base in Limestone, Maine. The Loring Timing Association sanctioned “Maine Event” drew land speed racers from across the country. 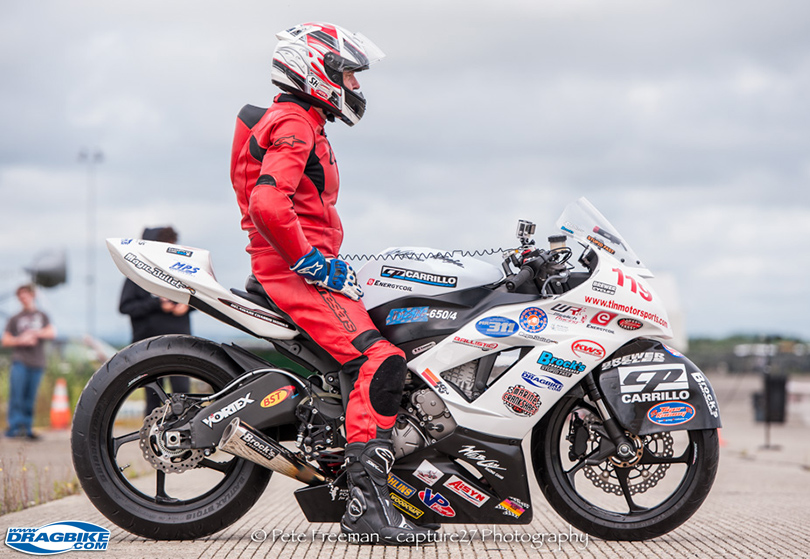 The 3 day event is a highlight of the racing season for many east coast racers. TLN Motorsports went north with 2 entries, the 2008 Kawasaki EX-250R and the new Kawasaki ZX-6R. Their goal going into the event was to push the current N/A 650cc class standing mile world’s fastest record up and attempt to set 32 new land speed racing records. 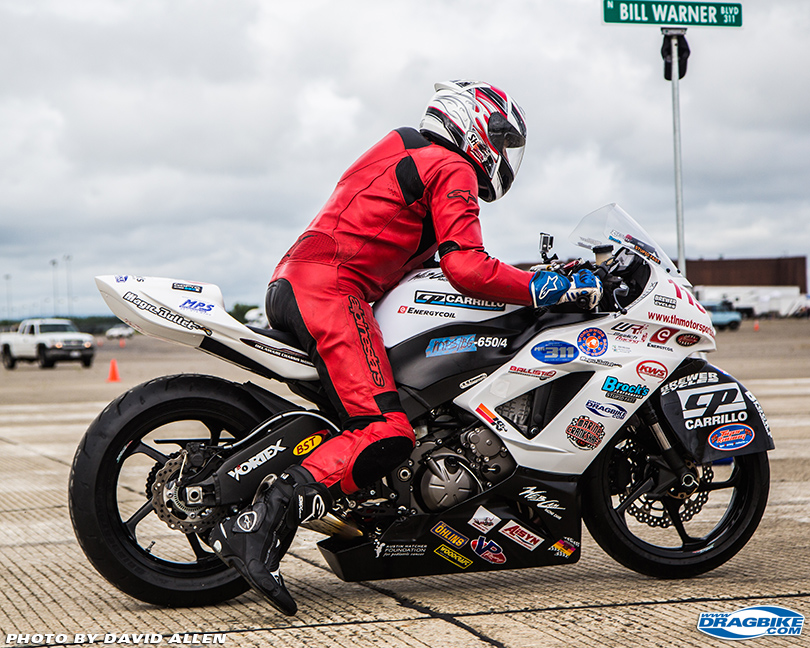 The trip from North Carolina to Maine was eventful, with issues that ranged from bank cards not working to navigation system failures to a flat trailer tire on the interstate. After about 20 hours of driving and 36 hours of no sleep, the team arrived in northern Maine. Thursday was sunny and cool for setup and technical inspection. Test passes were made on both bikes and rider, Greg Neal, felt that they were ready for racing on Friday. Arrival at the track Friday morning was greeted by rain, which lasted all day and washed away any hope of racing that day. 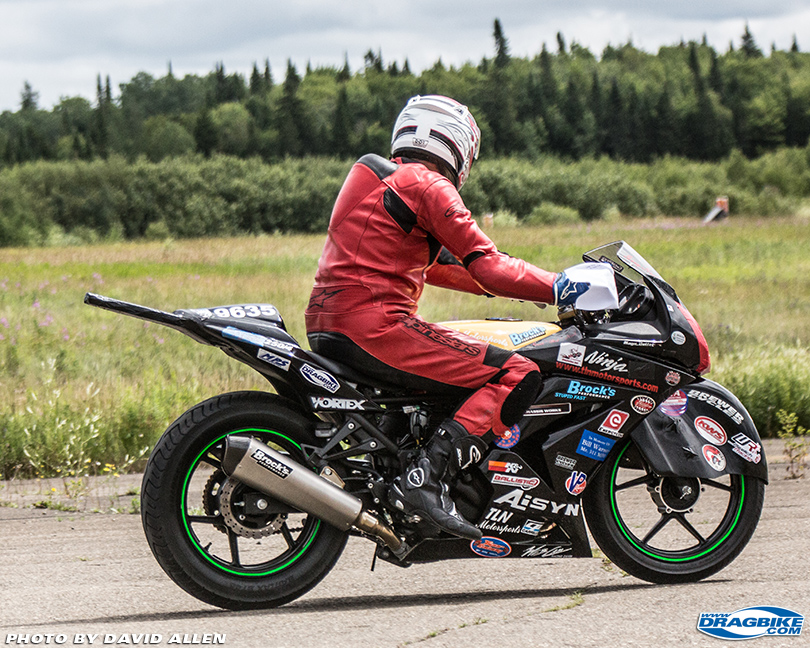 There was concern of not reaching the goal of setting 32 records with the wash out on Friday. Saturday morning was cloudy with a light crosswind and a line of rain showers only 11 miles south of the track. The ZX-6R was the 3rd vehicle down the track Saturday, but it was a throw away pass because the air shifter malfunctioned. The frustration built because they felt that each pass needed to be perfect in order to reach their goals. With the air shifter issue resolved, they quickly returned to the start line with both bikes making passes. Speeds were down slightly due to the cross winds on the big end.Riders talked about being moved across the track from right to left. Some riders had to roll off of the throttle in order to stay on the course. 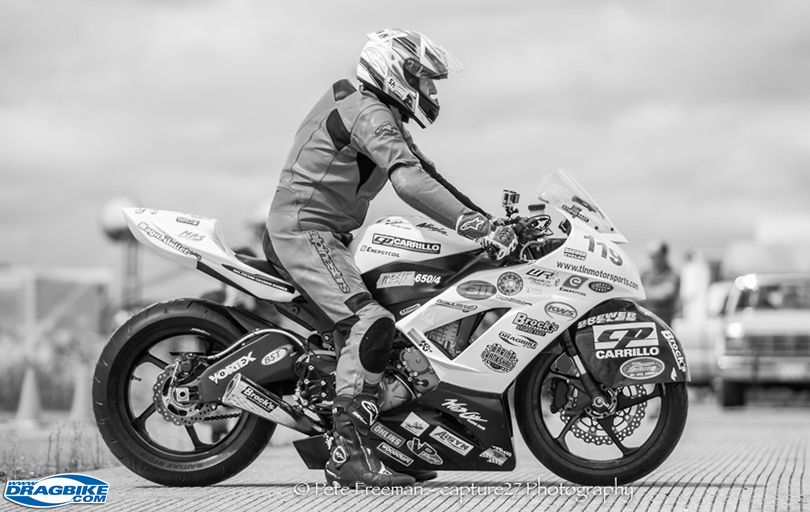 With changing wind conditions, the day was spent in line making gearing changes to both bikes for optimum performance. They continued to make passes until the course closed for the day around 7pm. Saturday ended with a top speed of 109.1100 mph in the 1 mile and 110.9449 mph in the 1 ½ mile for the EX-250 and 187.6394 mph in the 1 mile and 189.0528 mph in the 1.5 mile for the ZX-6R. They had unbelievably surpassed the original goal of 32 new records for the meet by setting 33 records in a single day! Not counting the 1st pass due to mechanical issues, rider, Greg Neal, set records on every run that was made on Saturday. The most eventful moment for Saturday was missing the skunk that wandered onto the course near the 1 mile mark just as Greg was getting there at speed on the ZX-6R. Saturday was a great day for TLN Motorsports, saying they were happy would be a huge understatement. 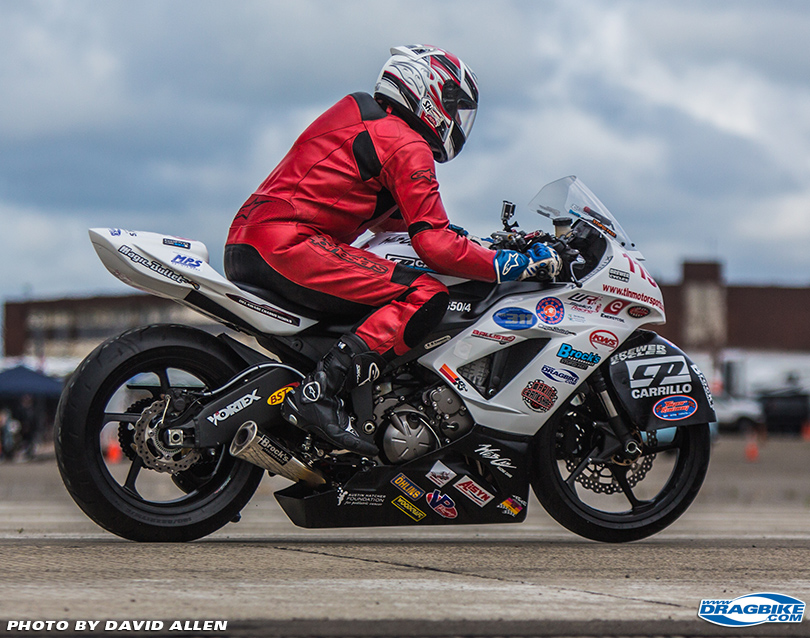 The team was back at the track early Sunday with the threat of rain coming to the area. The team has had a long time goal of becoming the all-time single rider with the most land speed racing records. While land speed racing records are loosely kept, due to many sanctioning bodies, most recognize that the current holder has a total of 248. The TLN Motorsports goal had always been 250 land speed records. Sunday morning, owner, Tracy Neal, and rider, Greg Neal, realized that if they had a perfect day, that goal could be reached in 14 passes. The ZX-6R was the 1st bike down the track and posted a speed of 188.3460 mph in the 1 mile and 192.1650 mph in the 1.5 mile. At that point, they knew that they had a shot of reaching the goal of 250 land speed racing records set by a single rider. The EX-250 bracket raced all day, posting speeds of 107-110 mph in the 1 mile and 109-112 mph in the 1.5 mile. It performed flawlessly all weekend, and people asked about the unique sound it made due to the Brock’s Performance exhaust. 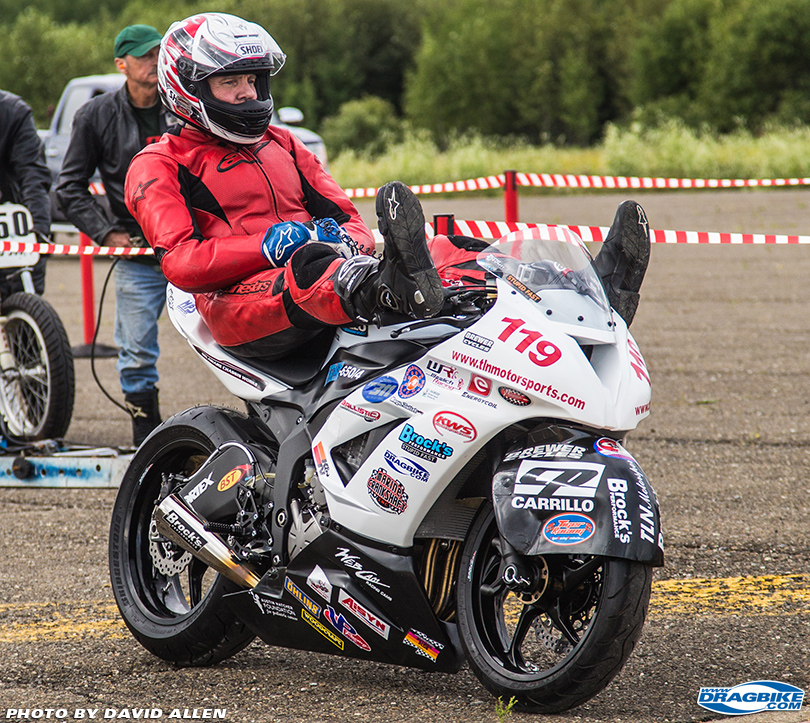 The skies became overcast and gray, but the conditions were good for racing with cool temperatures and a tail wind. The tail wind would turn into the famous Loring cross wind at 1 ¼ mile. Speeds for the 1.5 mile would have been faster if riders didn’t have to fight the cross wind, causing the RPMs and speeds to drop. The team still needed 7 record breaking passes to achieve the goal when the ZX-6R threw a chain on the return road, breaking the front sprocket cover. After a quick repair and re-inspection, that bike went back to the start line. Both bikes continued to make runs setting 1 mile and 1 ½ mile records on every pass. The team still needed 5 more runs when the impending weather arrived in the form of sprinkles. The next run on the ZX-6R resulted in a 1.5 mile speed of 192.165 mph. TLN Motorsports had achieved their goal of bumping the N/A 650cc class standing mile and a half speed of 190.118 mph, which they set in 2009! One goal completed one goal to go! The sprinkles started to increase and Greg made the next to the last run of the event on the EX-250, setting record 250 and 251 for TLN Motorsports. The EX-250 was low on fuel at the start line and the tank was dry on the return road. The fastest speeds for this event for the EX-250 were 112.3732 mph in the 1 mile and 112.5831 mph in the 1.5 mile. The fastest speeds for this event for the ZX-6R were 188.5472 mph in the 1 mile and 192.1650 mph in the 1.5 mile. 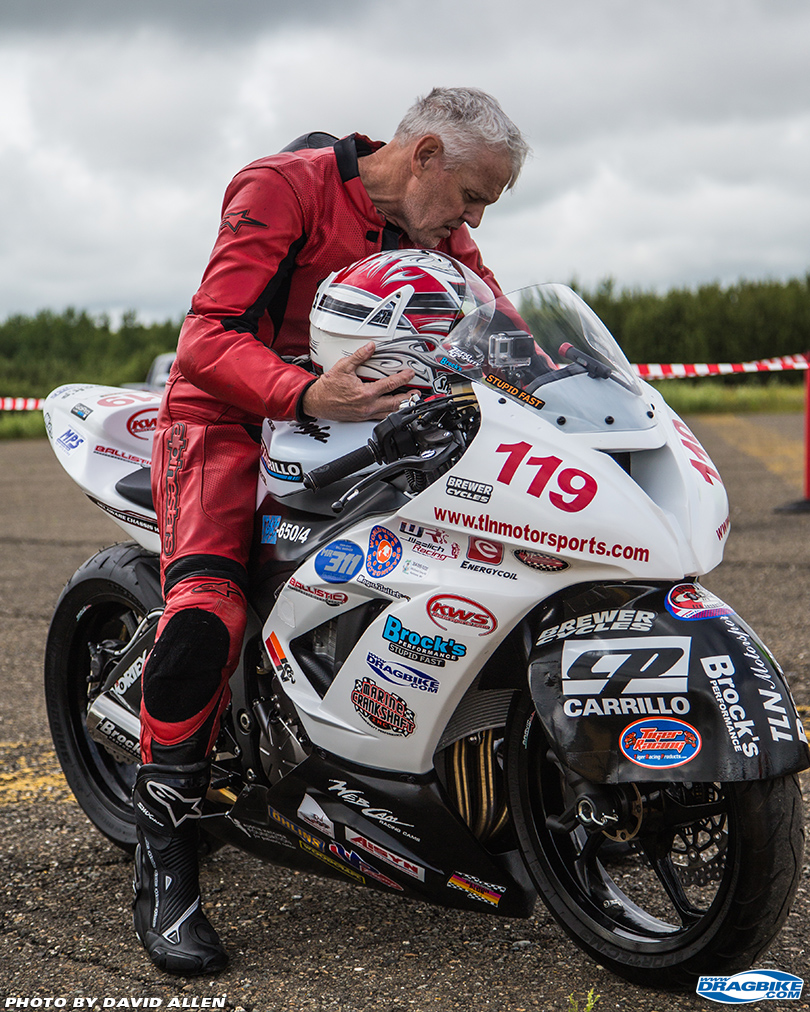 Greg said, “Both bikes were built with speed and reliability in mind. Both performed flawlessly the entire weekend. Combine that with a well-organized and managed event, and you have a recipe for success that is mind-blowing. TLN Motorsports cannot thank the staff and volunteers of the Loring Timing Association enough for all that they did. They were instrumental in helping TLN Motorsports achieve their dream of 250 land speed records and making that it a reality. For the racers that have never been to Loring, you don’t know what you are missing. The 13th and 14th largest runways in the world are there. It is a land speed racer’s dream. At this point, I am still not sure that I totally comprehend what was accomplished in one event in Maine, since I started land speed racing in 2008. Tracy stated, “There are just no words to describe how proud, happy and satisfied we are as a race team. We are in shock that we set 61 land speed racing records in a single event. We thought that record 250 would be set in July 2016. 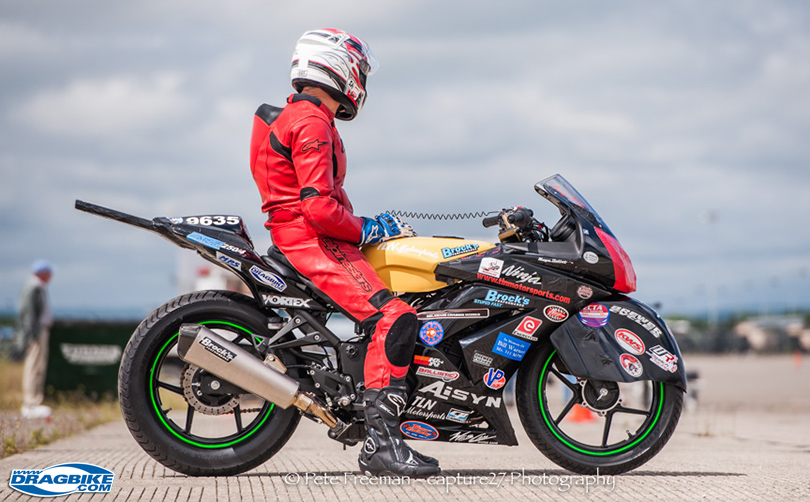 Some have already asked what our plans are, we have an idea of what we want to accomplish in the future, but we are going to think about that some more and just enjoy these accomplishments.” Greg added, “None of this success would be possible without the help of many great sponsors and supporters. It has taken an enormous amount of work and we have to thank so many people who helped us along the way. TLN Motorsports wouldn’t be here without them and we wouldn’t be able to continue making land speed racing history without all they do for us.”
TLN Motorsports would like to extend a huge thank you to:

A special thank you to Ralphie Navarro, Don Hass, Mark Dotson, Ransom Holbrook, Eric Roehrle, Joe Heffernan, Scott E. Jones and everyone that has assisted us in one way or another at the race track. Our success is your success. 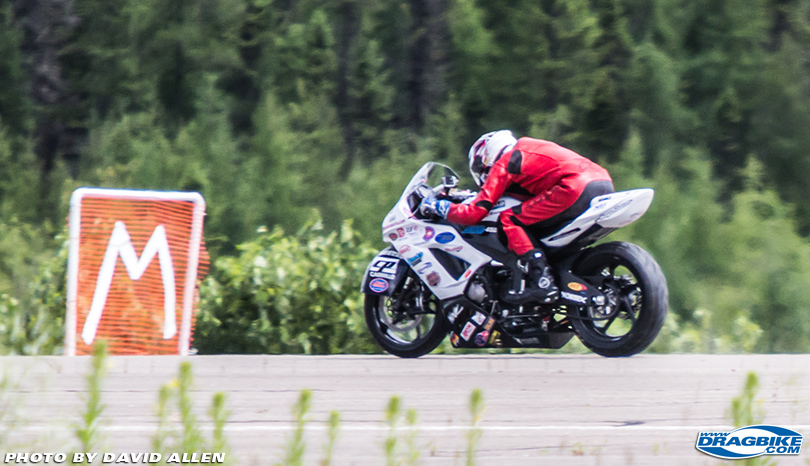