On the eve of the 2001 Motorcycle Drag Racing Season, we present our votes for the top ten motorcycle drag racing stories of 2000. 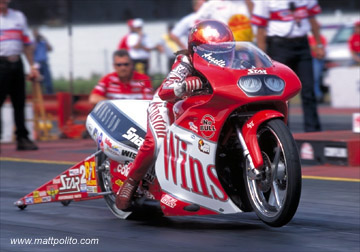 After two straight years of having to settle for the number 2 plate, Angelle Seeling finally captured the NHRA Winston Championship in Pro Stock Bike. Seeling, one the most recognizable names in motorcycle drag racing, came onto the scene in 1996, recruited to race with the late John Myers by George Bryce of Star Racing. Seeling immediately raised the ire of some in the Pro Stock community, who felt she was overshadowing the popular Myers and had not earned her position.

With Seeling, Bryce was able to secure the sponsorship of RJ Reynolds’ Winston brand, the richest deal in the class. Seeling immediately became a media darling and gave the sport unparalleled exposure. The scrutiny and pressure put on Seeling served to further the rift between her and her competitors.

But Seeling kept her focus. Under the tutelage of one of the greatest minds in the sport, Seeling tirelessly worked to master the craft. She eared the respect of every rider this season when she kept a violently shaking motorcycle upright after a high-speed rear tire blowout at Brainerd.

2 – Brock Davidson runs 7 seconds on a Street Bike – The greatest barrier-breaking performance of the year was accomplished by Brock Davidson, who became the first rider to run under eight seconds on a street-legal motorcycle. Competing in AMA/Prostar’s Quickest Streetbike Shootout class on his competitionaccessories.com Suzuki 1200S Bandit, Davidson recorded a 7.97 elapsed time at the Schnitz Summer Nationals at Rockingham Raceway. Since that time at least five riders have recorded seven second runs with the record being 7.814 set by current champion James Lauer on the Flo-Tec Racing GSXR.

3 – Dave Schultz Wins
Houston –
Dave Schultz would have made the top ten this year for the creation of his radical Suzuki Hayabusa Pro Stocker, but his story became much more poignant. Schultz’ Hayabusa marked the first serious attempt at streamlining a Pro Stock bike with state-of-the-art computer techniques and considerable wind tunnel testing. Tragedy struck the Sunoco camp when Schultz was later diagnosed with colon cancer. He turned the seat over to John Smith to focus on treating the disease. In the midst of chemotherapy sessions, Schultz got back on the bike at the Matco Tools Supernationals in Houston and scored an emotional win with a final round victory over Geno Scali. Schultz past away on February 11, 2001. Houston was his last win.

4 – Marty Kane Dies – On December 5, 2000 drag bike journalist, photographer and web master Marty Kane was found dead in his vehicle, an apparent suicide. Kane was the owner and creator of Dragbike.com, the sports leading web site. With wit, style and tremendous technical expertise, Kane struck a cord within the drag bike community and his site became the focal point for hundreds of thousands racers, fans and sport bike enthusiasts as well as being the official web site for eight different sanctioning bodies and race series.

5 – V&H and Star Racing to develop V-Twin Pro Stocker – Star Racing and Vance & Hines announced separate major deals to develop V-Twin motors for NHRA Pro Stock racing. V-Twins are allowed to run in NHRA but they are seriously out-paced by the in-line four cylinder Suzukis. The Star Racing deal is with S&S, who produces complete Harley-style engines while Vance & Hines inked a contract with Screaming Eagle, Harley’s own performance subsidiary. The two deal are the most serious V-Twin Pro Stock engine development programs to date.

6 – AMA/Prostar World Finals – The AMA/Prostar World Finals at Gainesville Raceway is unquestionably the biggest and best motorcycle drag race of the season. The 2000 version put it in the “race of the decade” status. Performance marks were re-set in every class except for Top Fuel where the late Elmer Trett’s four-year old records of 6.069 seconds and 235.10 mph still stand. The event also saw bitter and controversial points chases that will be talked about for years. But if for no other reason, the 2000 AMA/Prostar World Finals makes the top ten list because the next four spots on the list occurred at the race:

7 – Larry McBride wins AMA/Prostar Championship – After a nine year wait, one of the true superstars of motorcycle drag racing re-claimed his long-lost championship. McBride, better known as Spiderman for his bike-crawling riding tactics, last won the AMA/Prostar Top Fuel championship in 1991. His reign didn’t last long as in the opening event of 1992 he suffered a wicked top end crash, diving off the bike at 215 mph. While McBride was generally unhurt it took the team over two years to regroup and get back to the track. When McBride and brother Steve did come back they found Tony Lang, a former Funnybike rider, who was just beginning a five-year lock on the #1 plate. McBride, one of the most popular riders in the sport, became the first to run under six seconds on a motorcycle at Houston in 1999.

8 – Rickey Gadson fails to win championship – For the first time in five years, Muzzy Kawasaki factory rider Rickey Gadson failed to garner a #1 plate. Gadson, the flagship rider for the only true factory effort in motorcycle drag racing, was in serious points chases going into Gainesville, leading in both Superbike and 600 SuperSport. In Superbike, Gadson held a slim lead over Brock Davidson on Yoshimura GSXR. In the semis Gadson’s ZX-7 turbo caught fire against Davidson who was able to take the win. Davidson’s teammate, Mark Moisan, gave Davidson a final round single for the win and the championship. In the 600 class Gadson held a two-round lead over #1 plate holder Marty Ladwig. When Gadson lost in round two, Ladwig had to win the event to take the championship. After Ladwig got by three quicker opponents to retain the plate, Gadson charged riders with taking dives. His rivals pointed to two “questionable” wins Gadson received against a teammate earlier in the season.

9 – Antron Brown runs 7.04 in Pro Stock – Without a doubt, the single most impressive class at the World Finals was Pro Stock. Prostar rules allow for big-motor 4-valves and they were honking at Gainesville. Nine of the quickest passes in Pro Stock history were recorded at the event led by Antron Brown. Brown, utilizing a Byron Hines 1640cc 4-Valve tuned by Mark Pieser in the Team 23 Suzuki, became the first Pro Stock rider under 7.10 seconds, qualifying on the pole at the with a 7.07 blast. He later lowered the mark to 7.040 during eliminations. The run is significant because it puts the first Pro Stock six second run within striking distance.

10 – Gary Clark runs 6.45 in Funnybike – Four-time AMA/Prostar Funnybike champion Gary Clark simply obliterated his 6.61 elapsed time record with a stunning 6.45 World Finals. Riding the turbo alcohol Orient Express Kawasaki tuned by Rick Stetson, Clark qualified on the pole with a 6.52, ripped off a 6.48 in the semis and took the event win with a 6.451 at 208 mph. The performance was a personal vindication for Clark. Last season nitro Harley Davidsons ran in Funnybike against the turbo import bikes but because of the wholesale performance gains recently achieved by the Harleys, they were taken out of the class. Clark always knew he could run with the nitro V-Twins, now he proved it.
All photos by
Matt Polito www.mattpolito.com