Have you ever thought about racing in the class of Top Fuel motorcycle? If you have, read on and perhaps you’ll make a life-changing decision, one that will impact you for all your days to come. Believe me; your life will change forevermore if you or someone you know decides to go Top Fuel motorcycle drag racing. 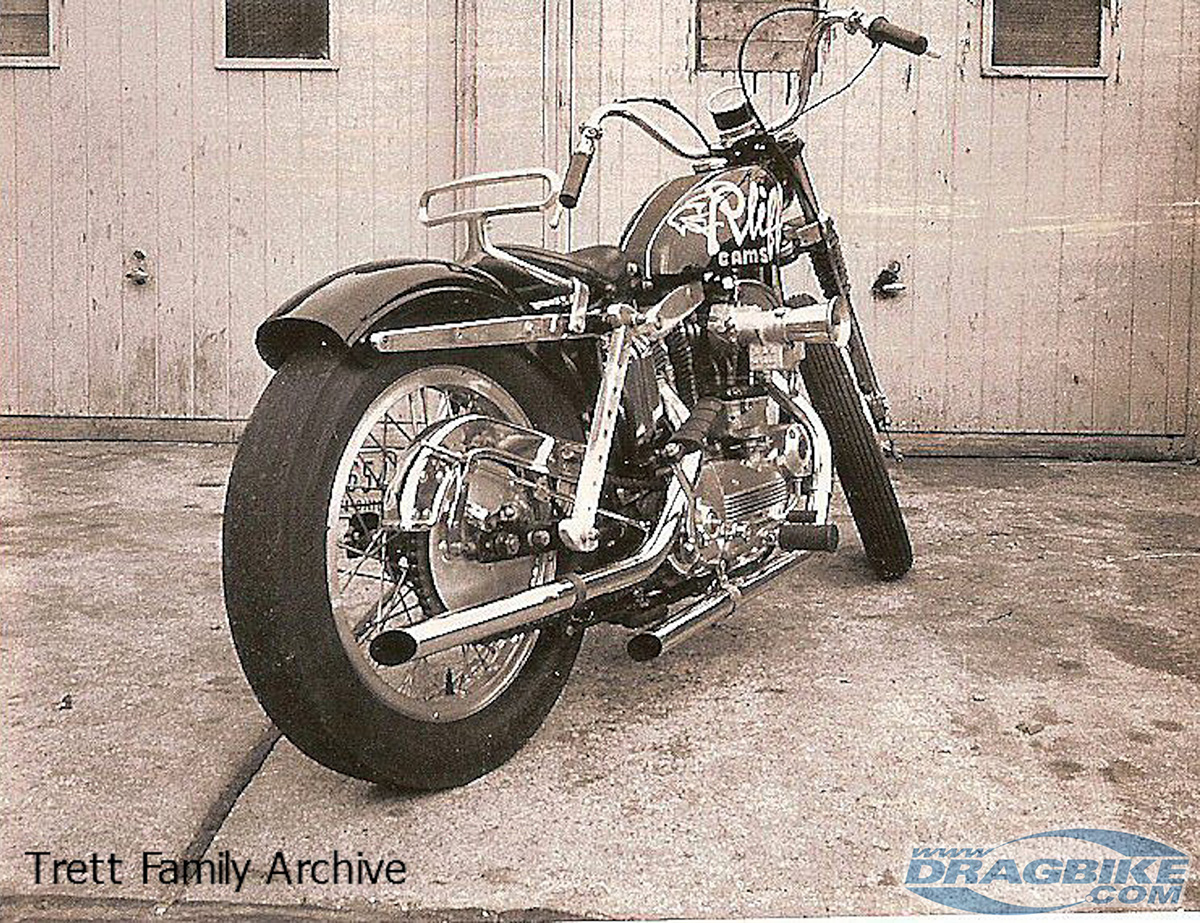 Elmer Trett was racing his street/strip 1969 XLCH, which he bought new in 69 and he modified it to go drag racing as you see it here in September of 1971. Elmer began as a bracket racer and by 1972 he stuffed this motor into a lay-down chassis and began learning how to pilot a dragster. By 1974 he was in double engine Top Gas: then in 1976 he entered Top Fuel. By 1979 he had his first T/F #1 plate and began setting records in the class and for close to twenty years he was the man to beat in Top Fuel motorcycle drag racing. His humble beginnings as an ET bracket bike racer show what a racer can do when they commit to doing the best they can. It’s now what you have in life that matters, it’s what you do with it.

In 2020, there will be new teams racing in Top Fuel motorcycle, why not you?

Motorcycle drag racers come in all sizes, shapes, colors, assorted religious beliefs, sexual orientations – you name it: diversity is the norm in the sport of motorcycle drag racing. More than one motorcycle drag racing sanction has over a dozen different classes of racing machines. Some have more, others have less. It’s safe to say there’s something for everyone who wants to get involved in the sport. But only a few, the proud and the outrageous will race at the sport’s highest level in the class of Top Fuel motorcycle.

Let’s face it, not everyone wants to strap on a blast vest to go for a motorcycle ride.

Top Fuel motorcycle drag racing is the summit of two-wheeled competition. An extreme sport if ever there was one. Most of these bikes produce in excess of 1,000 HP and can go from zero to 100mph in roughly 1.25 seconds. You read that correctly: in one and a quarter seconds, a Top Fuel motorcycle will already be doing 100 MPH. Got balls? If you want to race in Top Fuel motorcycle, big ones are required.

There are basically three classes of Top Fuel motorcycles, I-4 bikes, which are inline four cylinder motorcycles sporting close to 1500 cc’s. These bikes are the kings of motorcycle drag racing. For V-Twin fans, there are the classes of Top Fuel Harley and Top Fuel Twin. These bikes can sport motor sizes of close to 200 cubic inches of displacement and are similar, but the big difference is T/F-Twin is a European based class that allows overhead camshaft configurations and does not require mechanical, constant flow, fuel injection. These are all nitromethane burning fuel classes with very specific rules established by the various hosting sanctions.

While each sanction’s rules vary by class specifications, they all have a common thread: the use of high volumes nitromethane fuel is mandatory with high horsepower being the result. Frankly, it’s hard to wrap one’s head around a TFM power plant knowing it can and will produce in excess of 1,000 horsepower when the driver snaps open the throttle.

Ian King, 10 x European TFM champion once commented, “There is nothing particularly special or difficult about riding a Top Fuel Bike well compared to riding well in any other class, a good rider is good whatever the class or gender. All we have to do is open the throttle and keep it in our lane from start to the very end. The fact that not many females have done it so far applies to drag bike racing classes in general. A number of riders have hit the ground running without prior experience and some only had street bike experience before (Jimmy Brantley & Petri Paljakka for example). It’s about the desire to run in the class and mindset.” This comment is compelling coming from Ian King, a man who knows from where he speaks.

Ian has raced street bikes in various forms, a Pro Stock motorcycle and he’s climbed up the competition ladder on up into the Funny Bikes and Top Fuel motorcycle racing classes. He’s an official member of the MTC 5 Second Club and he’s made more 5 second elapsed time runs in the European racing sanctions than any other TFM pilot living today. So his comment has great weight. If you’re thinking of going Top Fuel motorcycle drag racing, what are you waiting for?

So, what does it take to get started? When 20x Top Fuel motorcycle champion Larry “Spiderman” McBride was once interviewed and asked what it takes to run a 5 second Top Fuel motorcycle his first response was “Surround yourself with the right people, that’s #1. You have to have the right people on your team by your side.” Without question, this is the most important rule to getting involved in Top Fuel Motorcycle drag racing.

In the year 2020, when this story was created, there are currently over thirty Top Fuel Harley teams operating globally. In Top Fuel – Twin there are close to twenty teams and in Top Fuel motorcycle drag racing there are close to two dozen teams world-wide. There is a wealth of knowledge available to draw from in this talented pool of experience. It matters not if a new racer wants to compete with a two-cylinder or four cylinder bike. Seek out the leaders of the sport and start asking questions BUT don’t ever waste their time. Be forewarned here, sincerity is required and there are a few ground rules you need to know before you pick up the phone.

The world of motorcycle drag racing is a small one. Everyone in time get’s to know everyone. Always tell the truth and never engage in falsehoods or half-truths. Sooner or later, everything comes to light. If you say you’re going to do something, you must follow through. It’s okay to fail; it’s not okay to make excuses or blame others. Don’t be an ask-hole. Never seek advices from a professional; then go do whatever you want. Next time you want advice, they will remember what you did and treat you accordingly. Reread the first sentence of this paragraph and realize the ramifications of its context, there are consequences for your actions.

Finally know the following and never forget this hard-fast rule – Speed magnifies everything exponentially. The greater the speeds you travel, the faster and greater the results. Everything costs more in TFM drag racing, mistakes are magnified and happen sooner with magnified repercussions, decisions not only affect the driver but the drag bike pilot in the next lane. Think clearly before acting.

It doesn’t take a million dollars and four-five spare motors to go Top Fuel motorcycle drag racing. A Top Fuel Harley, state-of-the-art, can be had new for around $60-70,000 dollars built by some of the best in the business. But it’s who a racer has for teammates that will have the greatest impact on their efforts. There are currently close to 50 Top Fuel Motorcycle teams out there, why not you?