On the weekend of August 20-21, in the year 2022, the 50th running of the Truett & Osborn Drags commenced at Kansas International Dragway, in Maize, Kansas. It was one for the books and certainly an event to remember. 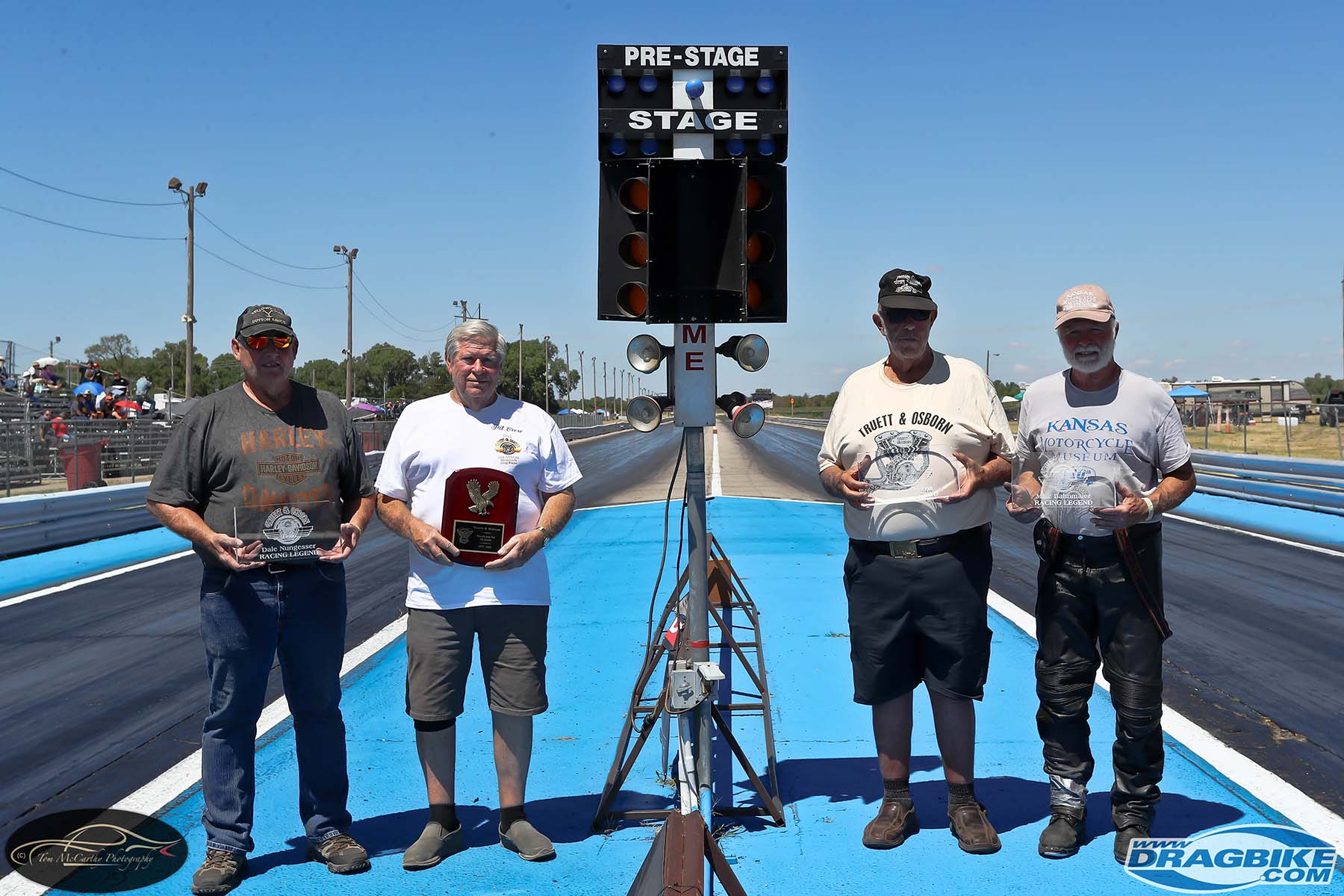 In a day and age when newer is better and most people have the attention span of a gnat, the 50th annual running of anything is a sight to behold. Fifty years of tradition continued as motorcycle drag racers from across the USA flocked to the Great Plains of America’s Heartland to battle it out, just as they first did in 1972. This is America’s oldest running motorcycle drag race and all on two-wheels are welcome to attend. 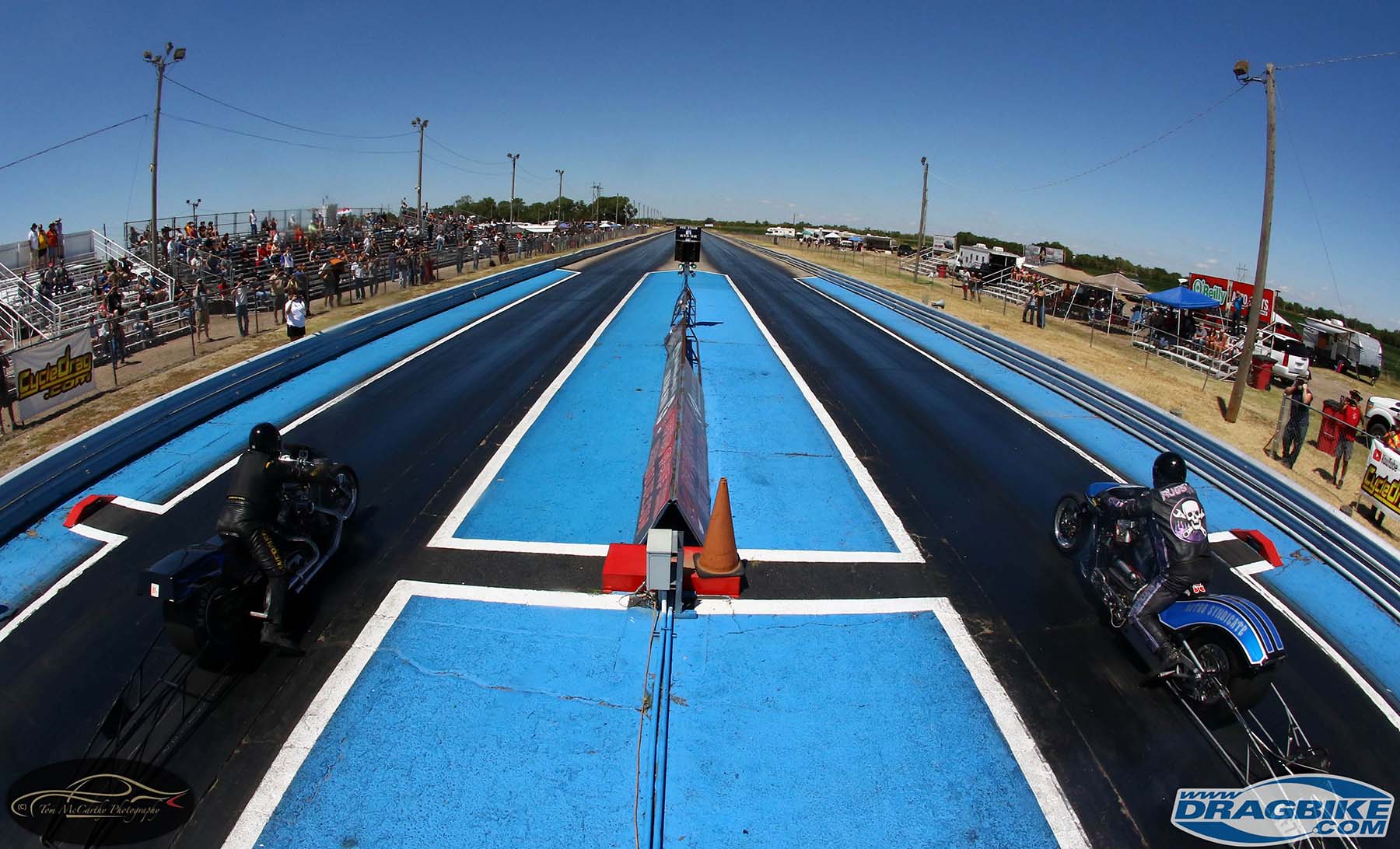 The rules have evolved over the five decades to adapt to the racers, and the racing has evolved to meet the modern era. So while a Pro Mod worthy drag bike with mountain motor, NOS and wheelie bars has a class to run in, so too will a 96” CID Harley Davidson Sportster in a Bonnie Truett dragster chassis or a double engine nitro Harley. There’s something for everyone at the T&O drags, every year. 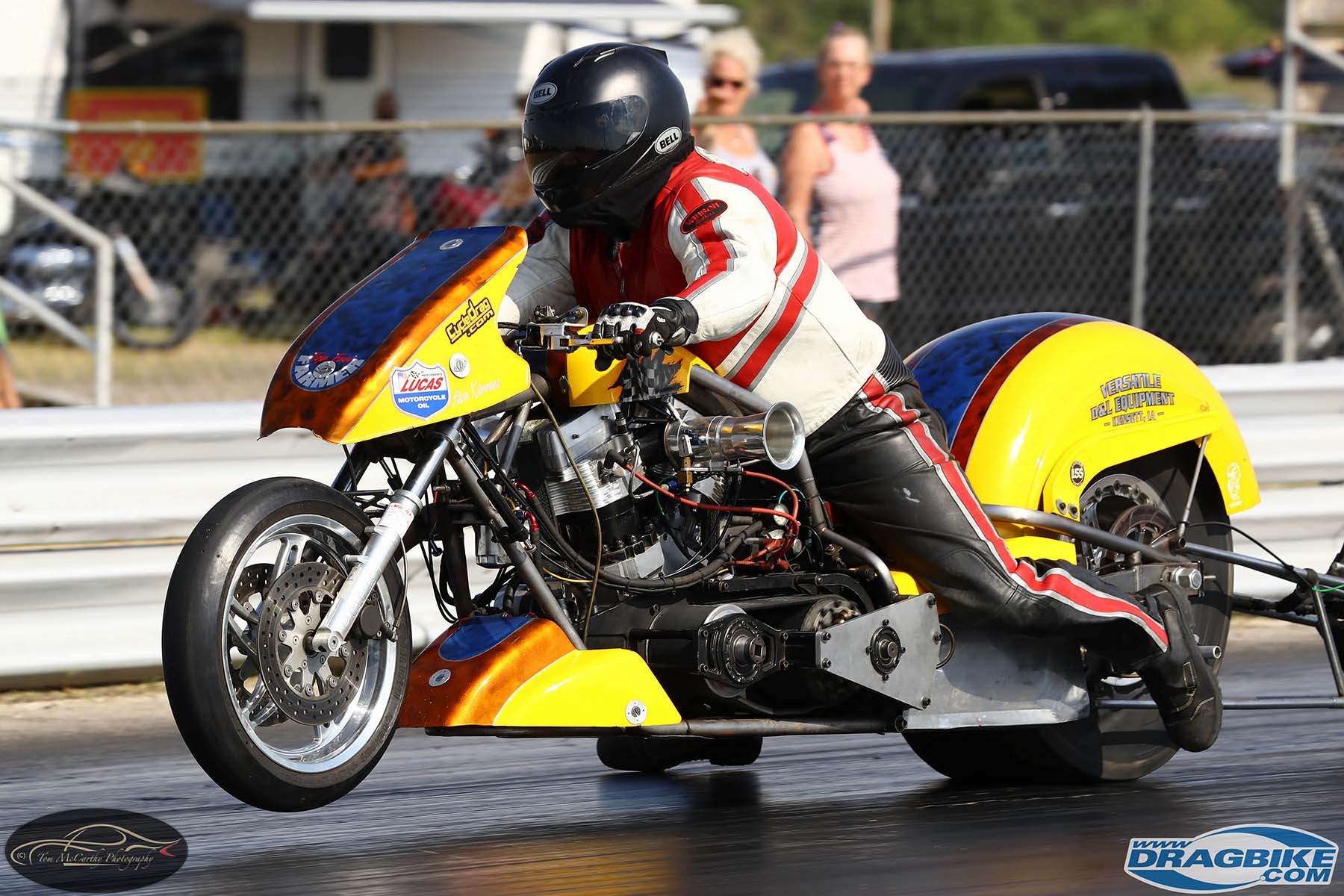 Motorcycle drag racer Bonnie Truett and his street racing partner, Paul Osborn, in the latter part of the 1960’s got together and opened a speed shop for hot rodding Harley Davidson motors. They offered stroker kits to make bigger motors with and Bonnie Truett, being a talented welder/fabricator, made rolling chassis, along with other lightweight go-fast parts. 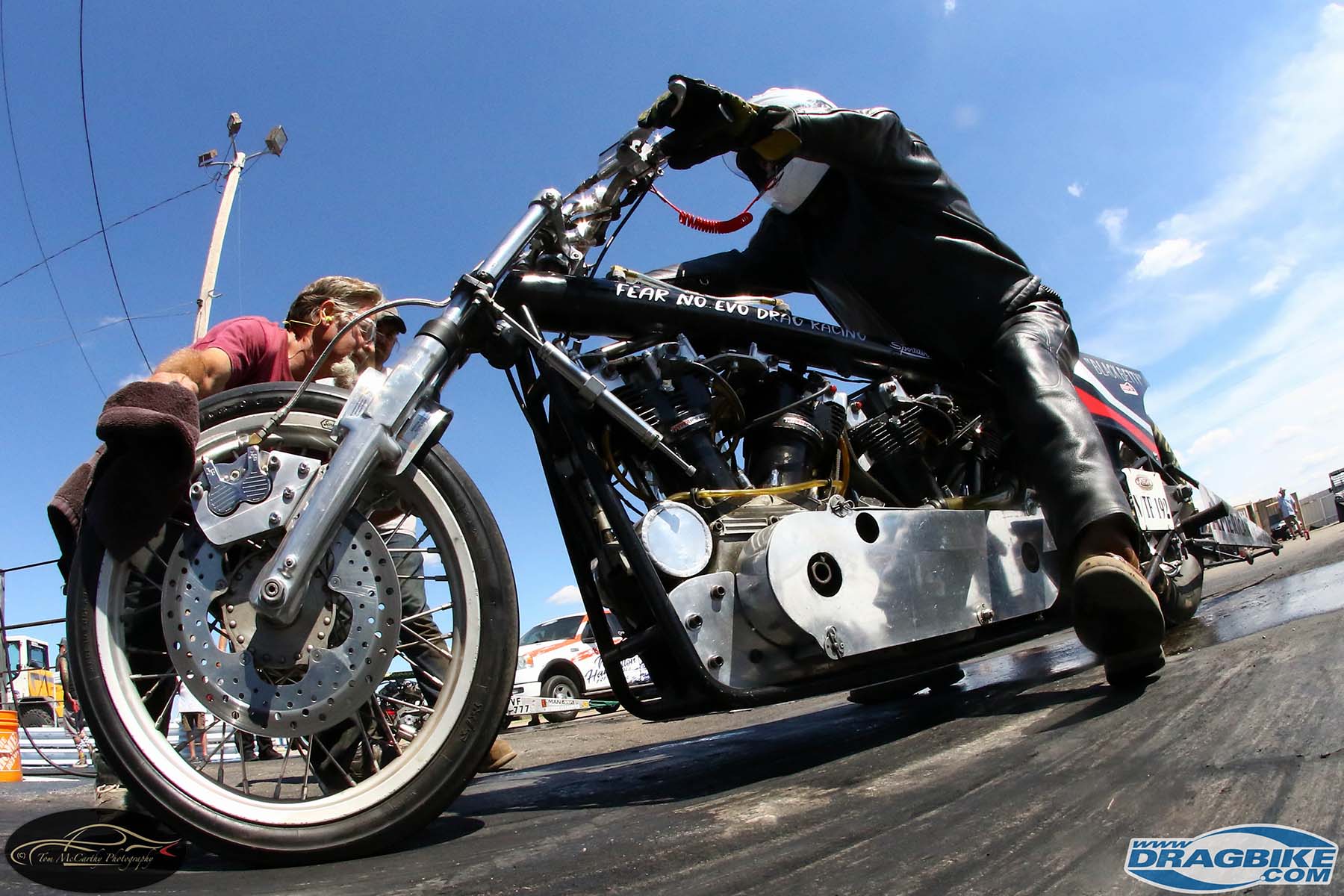 At the start of the 1970’s as their business enterprise took off, they partnered with local drag strips and by 1972, the Truett & Osborn Bike Drags came to life. The biggest names in motorcycle drag racing history have all been to, and raced at the T&O Bike Drags. Granddaddy Joe Smith, Pete Hill, Marion Owens, Elmer Trett, Bonnie Truett: name any big name Harley racer from yesterday and chances are, that racer paid his dues at the T&O at some point. 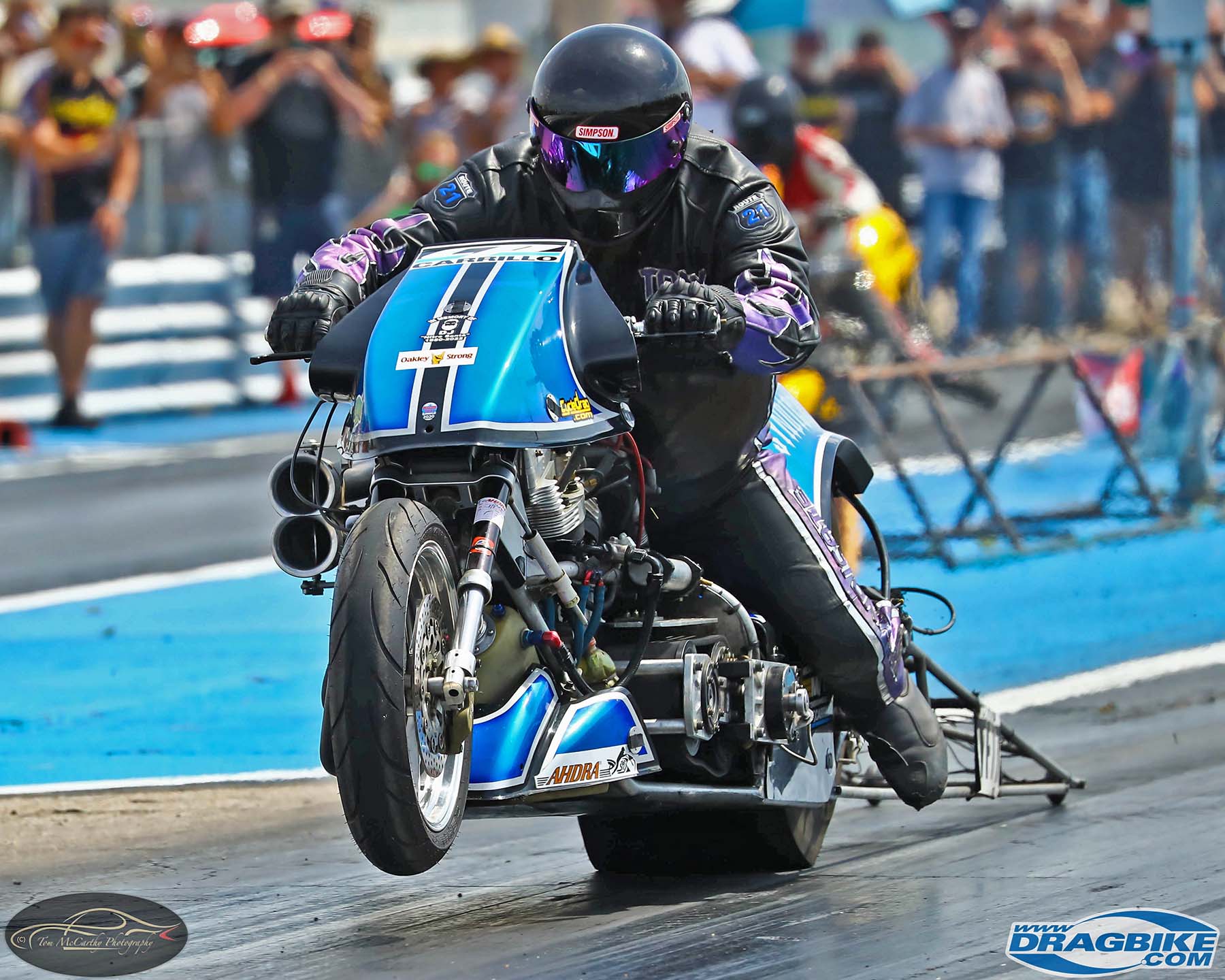 Nitro Harley Davidson pioneers, pillars of the nitromethane community, were in attendance at the 50th T&O. Paul Osborn, Marion Owens and family, Pete & Jackie Hill, Dale Nungesser, Mike Bahnmaier: each of these racers has inspired countless other racers to do their best to join them in the history of Harley Davidson fuel bike racing. These are all racers we all look up to that helped shape the sport from its earliest roots. 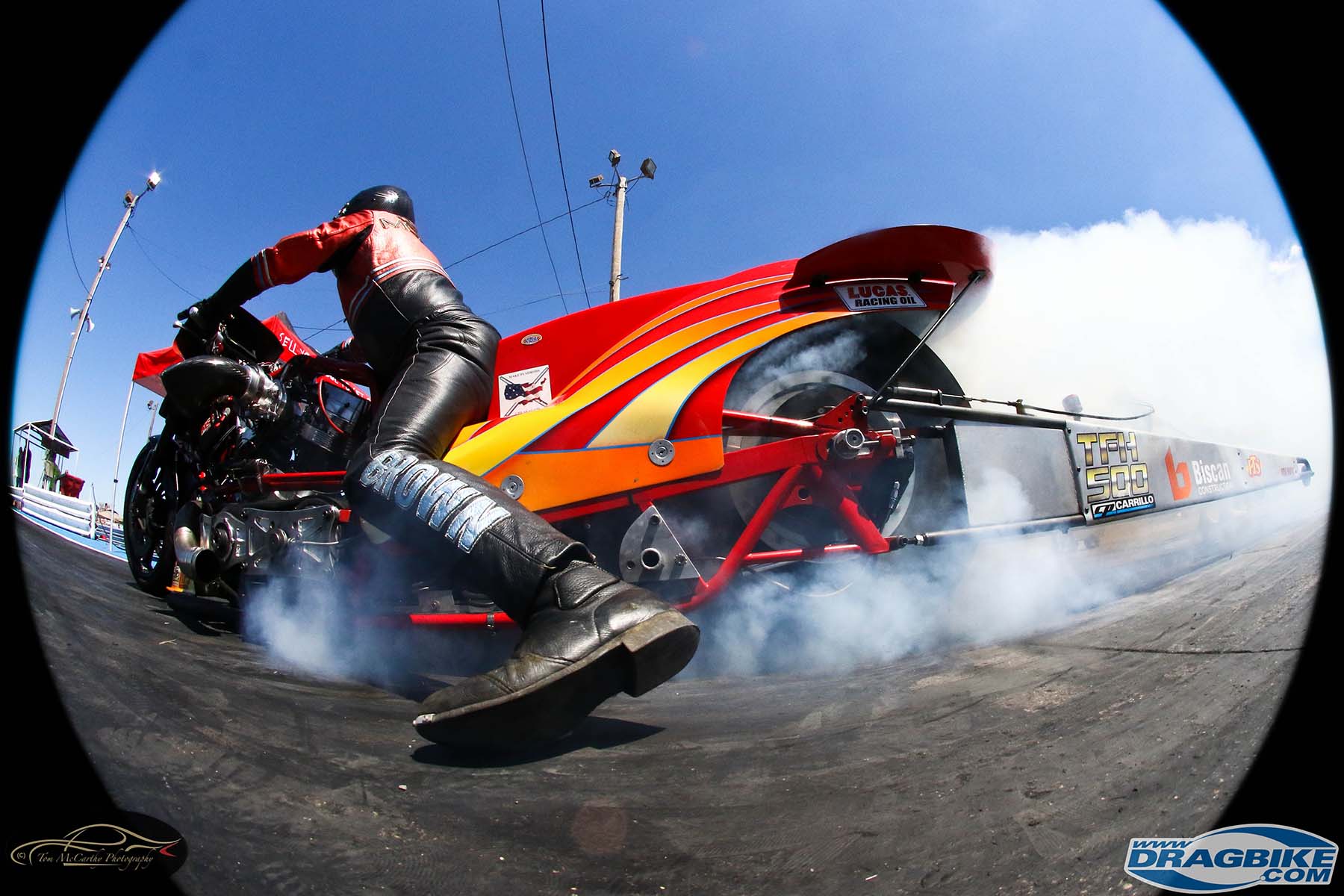 As the racing unfolded over the two-day event, in the Top Fuel or for this event “Open Fuel” class of racing, Jordan Peterson of Titonka, IA, was the #1 qualifier with a 5.97 elapsed time in the 1,000-foot surface of race track at Kansas International Dragway (KID). He went out the first round of competition due to parts gremlins. Mitch Brown, piloting the Johnny Red Rhea, PTS Racing Top Fuel bike thundered on to victory over Dusty Werner in the final race of the day. Mitch Brown also made one exhibition pass on Saturday on his four-cylinder Dennis Bradley Top Fuel bike, much to the delight of the fans. 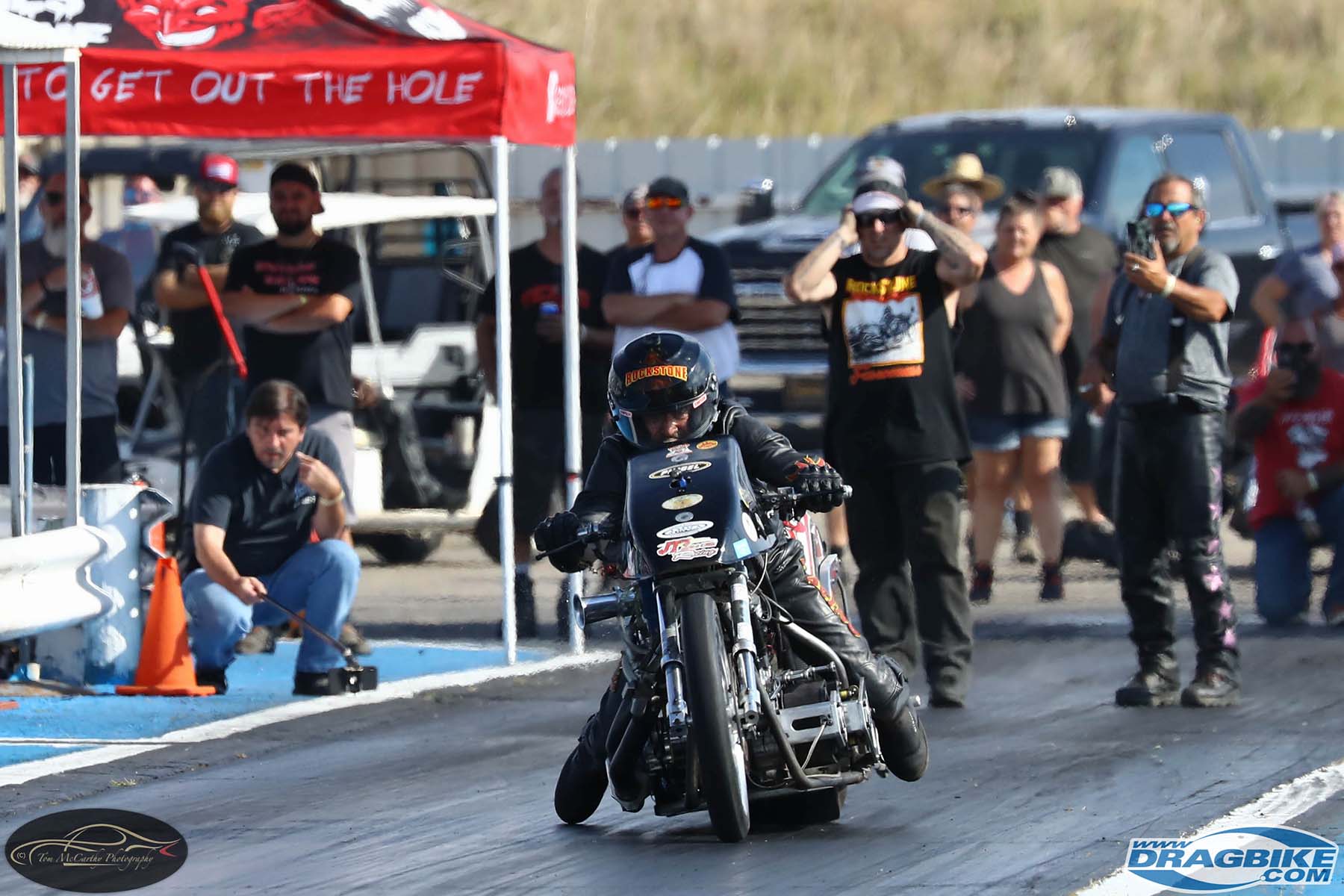 In the T&O “B-Fuel” class, which was inhabited by various bikes in the Pro Fuel class by today’s classification, Rocky Jackson of Youngsville, Louisiana, was not only the #1 qualifier, but Rockstone rocked the house and won the event for the carburetted nitro Harley bikes. Hat’s off to JW Webb for his R/U placement in the class. 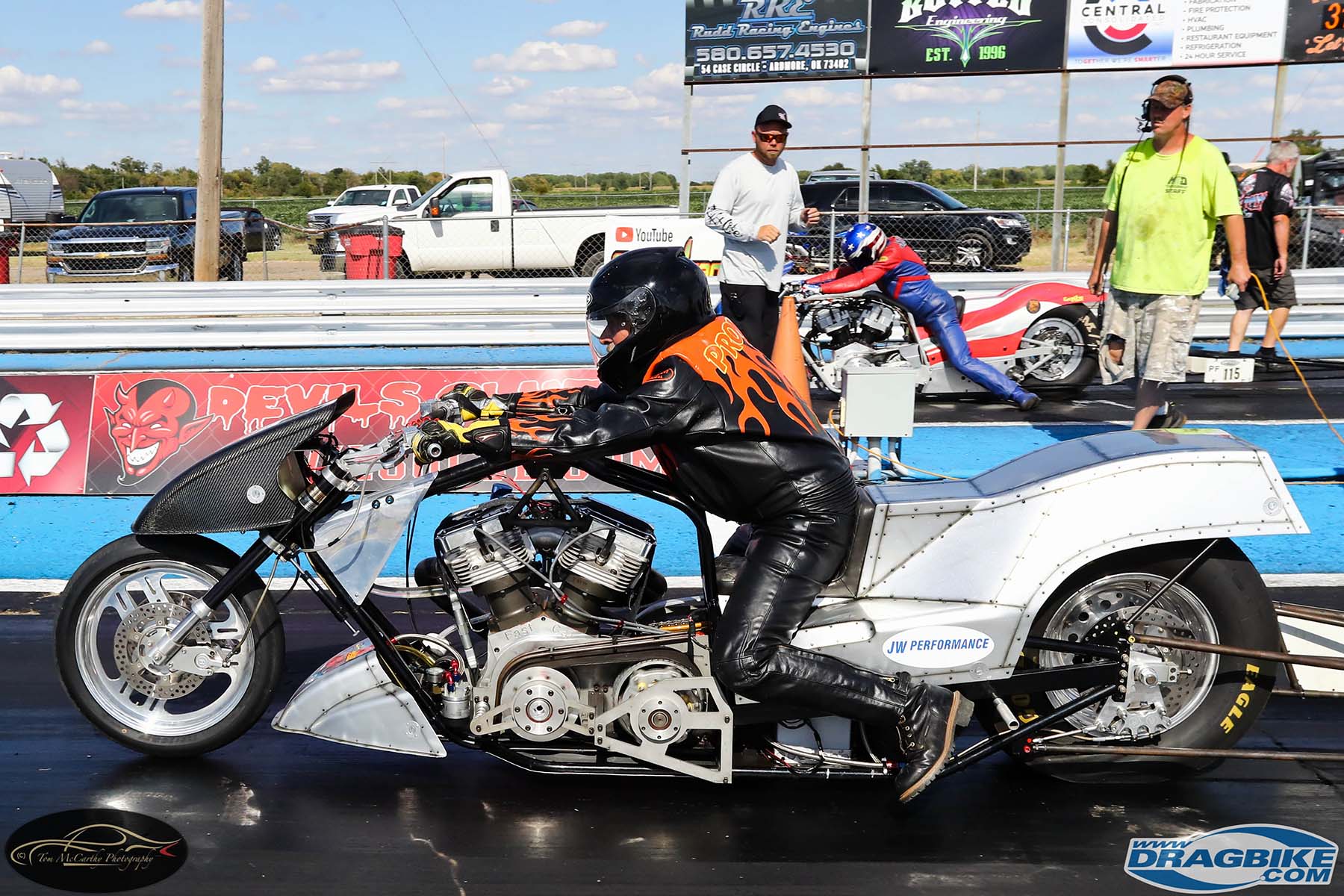 Top Gas Push-Rod class was inhabited by the vast variety of tricked out gas burning Harleys and tops was John “Jet” Peek of Houston, Texas who qualified #1, then kicked everyone’s butt to the curb by winning the event, over Louis Sansone on his Nitro Bums racing machine – what a beautiful bike! 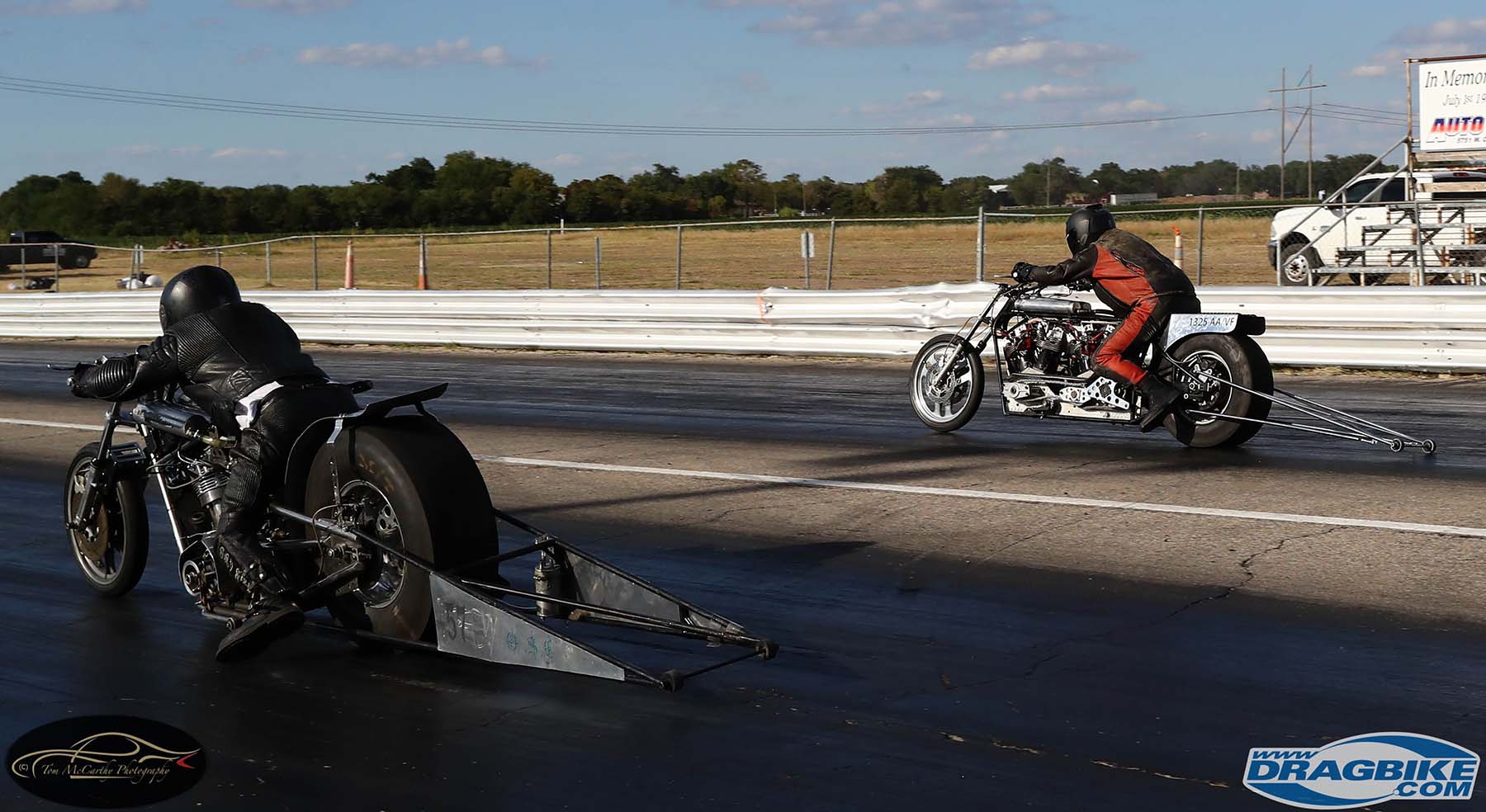 In the fan-favorite Nostalgia racing class, where the true racing machines of the 1970’s lurk, everything from big tire single engine bikes to Jurassic Period double engine, nitro Harleys bring the sights and sounds of the hippie era alive. The event’s winner was Red Roberts of Itasca Texas on his Dinosaur Racing double engine Shovelhead, nitro Harley. Red is in his 70’s now, and it meant the world to Red to park his bike in the winner’s circle at this prestigious event. Jeff Williams of Texas was the R/U. 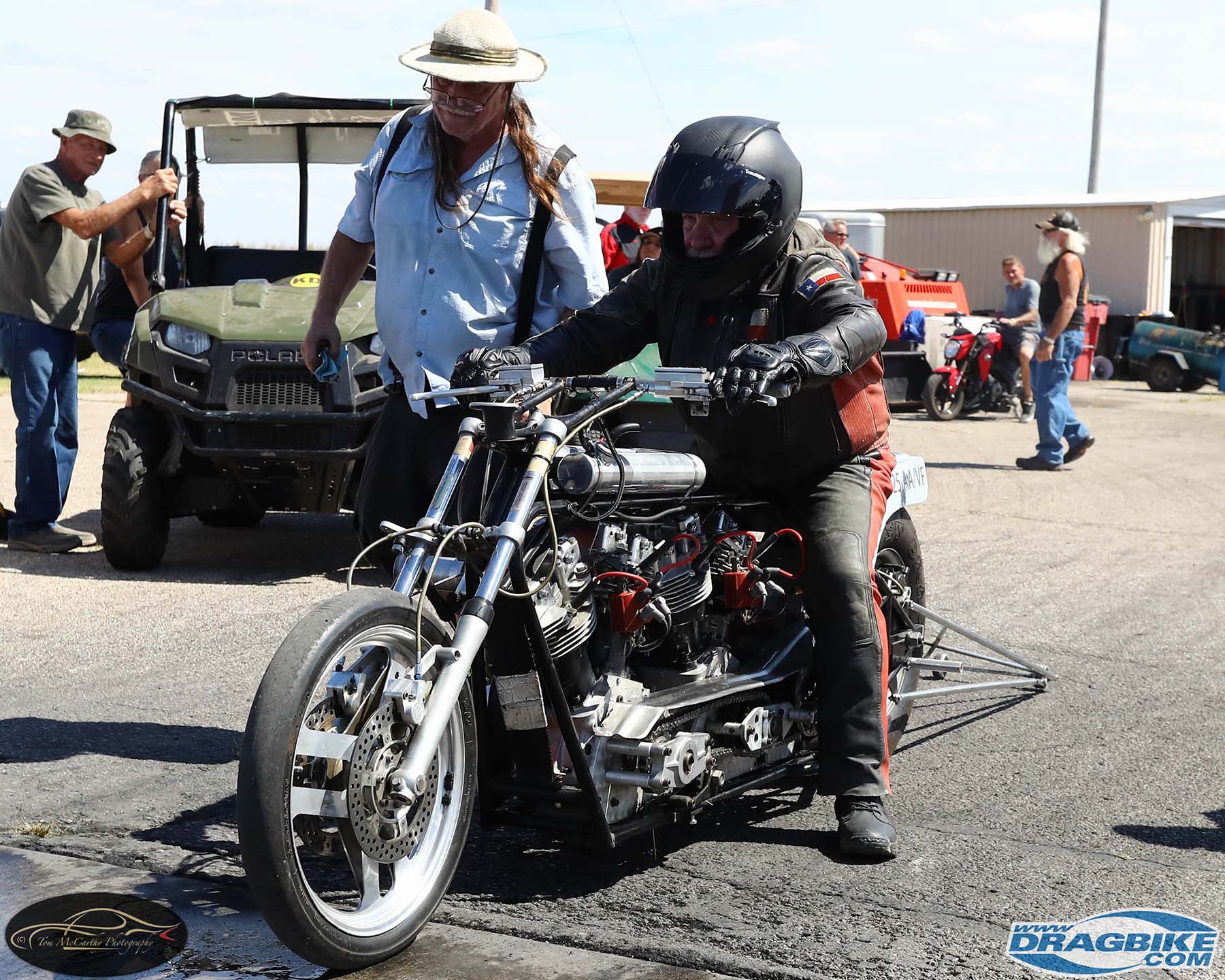 In Top Gas Open, a class with anything running gas, in any configuration, the baddest racer of the day was Austin Wagoner of Oklahoma City, Oklahoma on his tricked-out Kawasaki, over the beautiful green machine of Eric Schlup, of Emporia, KS. 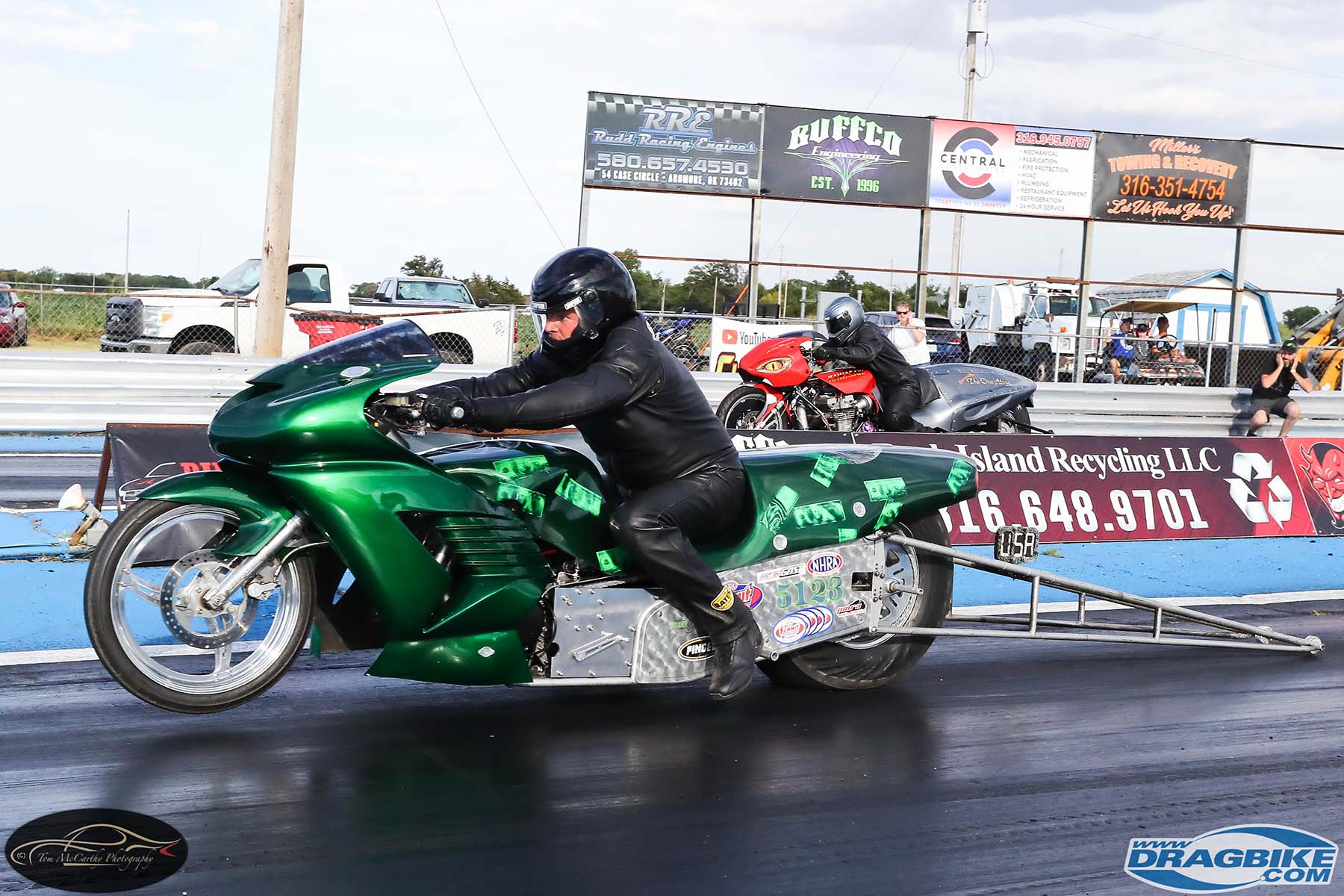 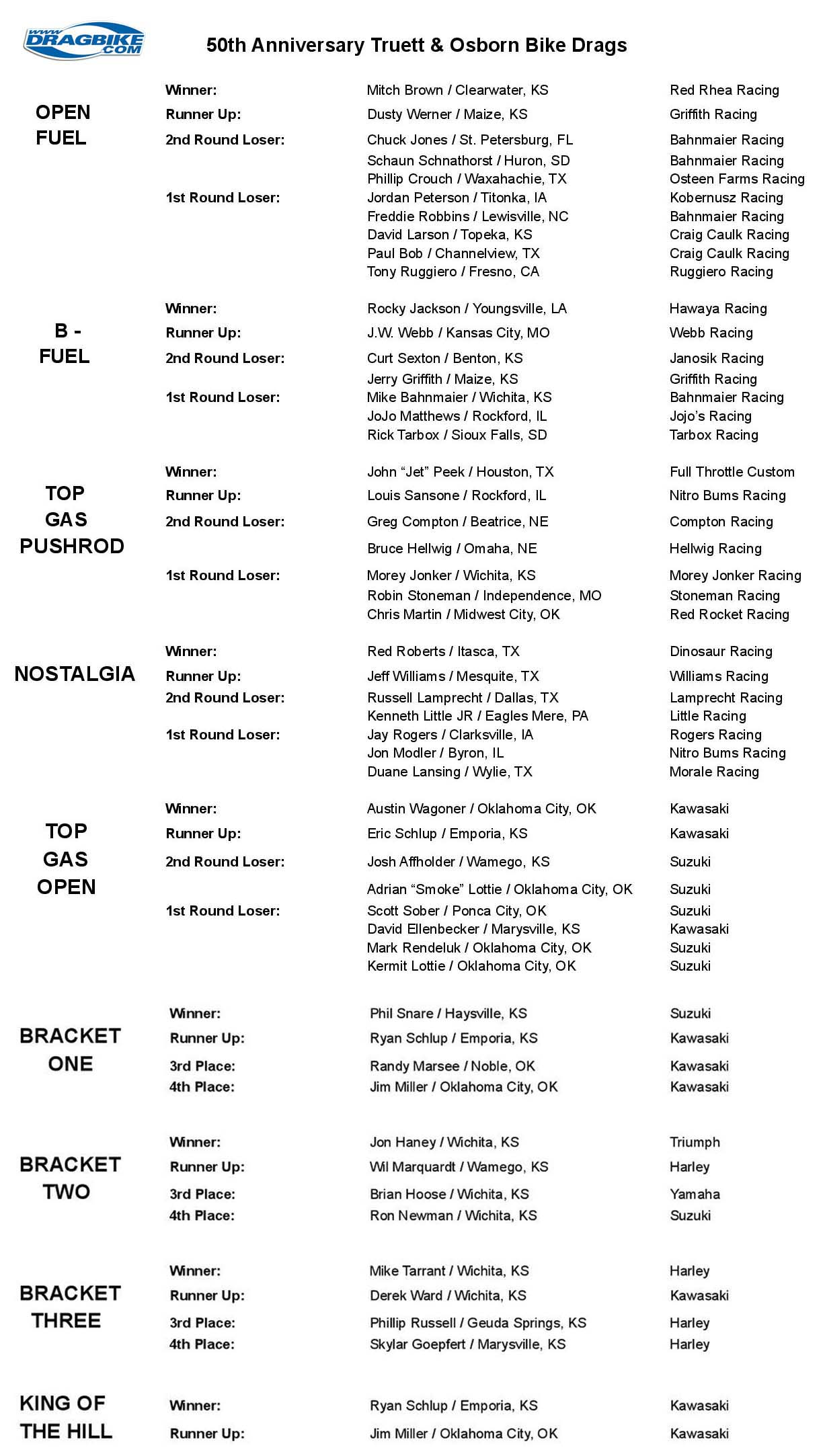 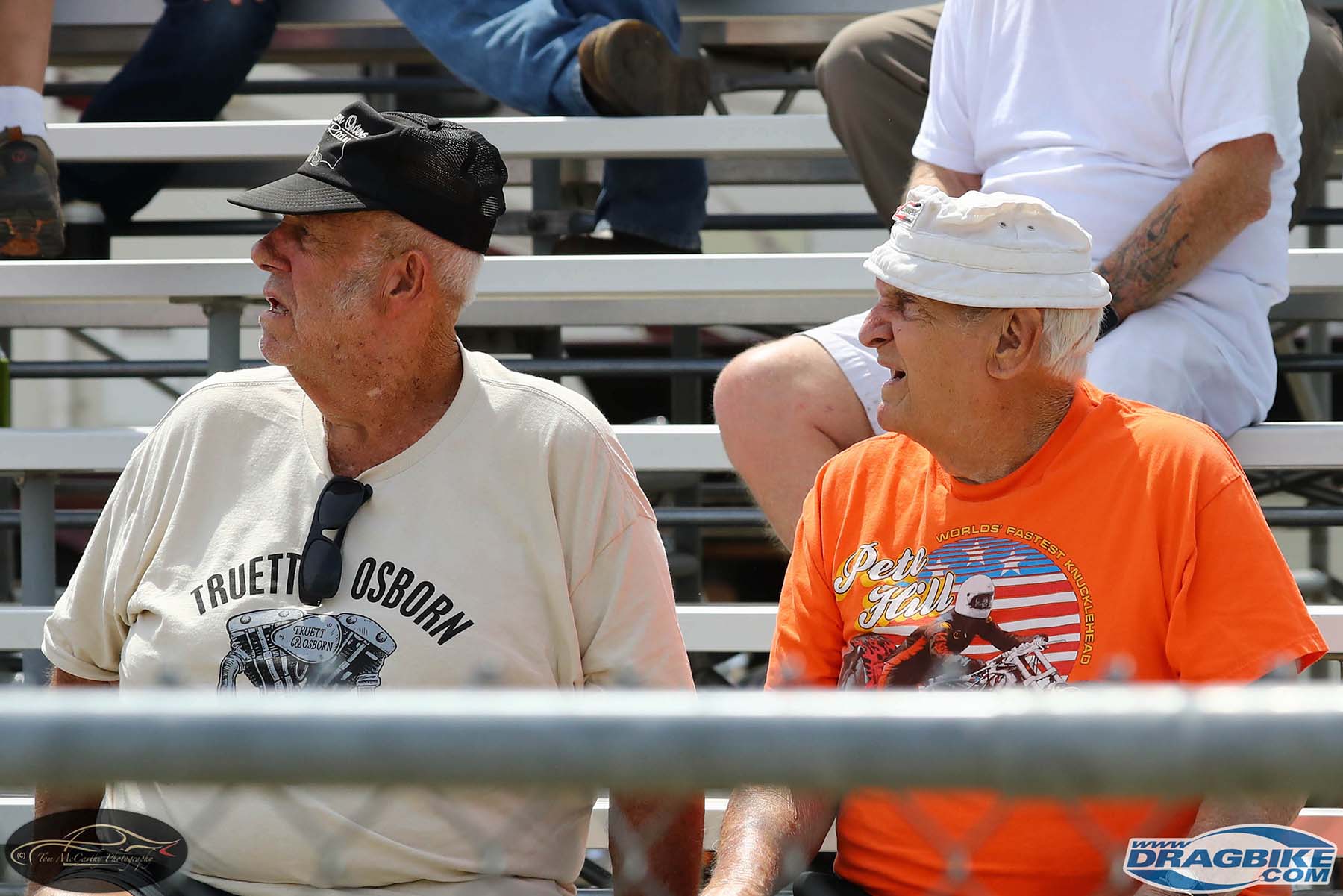 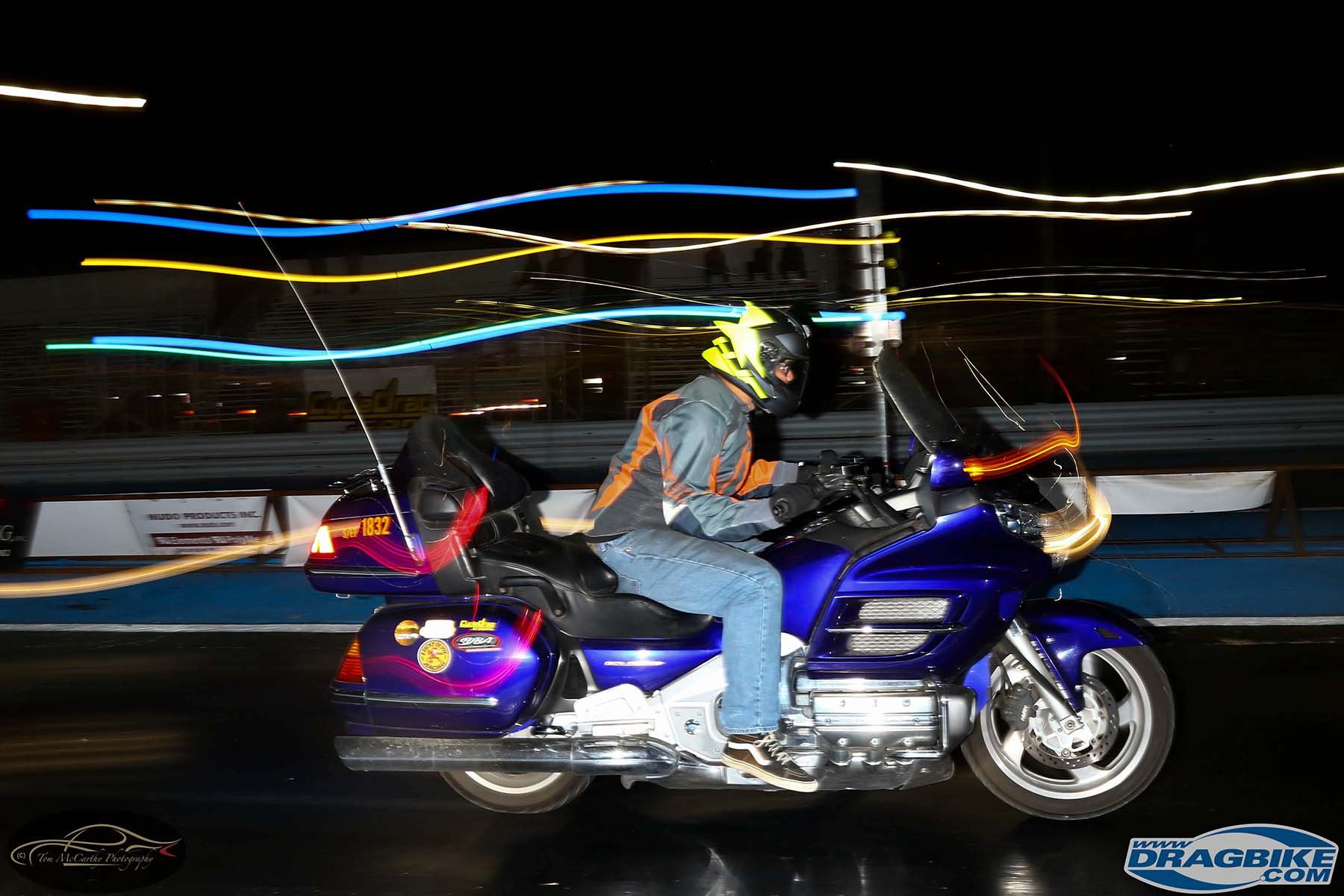