The Turbocharged History of Stotz Racing

The Turbocharged History of Stotz Racing

“1979 was when I learned that my riding could win races.”

Life-defining moments are not often so clear-cut. Usually, it’s difficult to determine exactly when you realize your talents have come into their own. This wasn’t the case for Kent Stotz, the founder of Stotz Racing. The sign was obvious in 1979, and since then, he has built a seasoned motorcycle drag racing team with four Pro Street national championships under its belt. Drag racing simply runs through his veins. 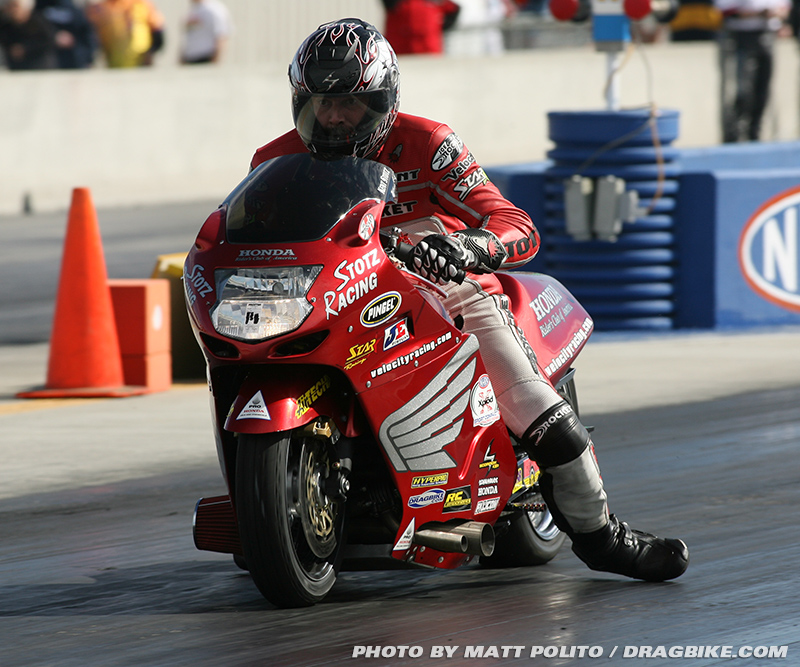 From an early age, Kent received a healthy dose of the sport from his dad who was involved in racing drag cars. At 12 years old, he got a minibike which gave him his first taste of motorcycles. It was then when his focus transitioned from four wheels to two. Anyone who has ridden motorcycles knows that bikes are an addiction that you can’t shake.

How did Kent handle the addiction? Well, he went all in.

In the beginning of his drag racing career, Kent raced motorcycles that were naturally aspirated. The bikes had finely-tuned engines that relied on displacement to go fast. But, it wasn’t long before he went up against a competitor who was using a new type of performance technology: turbocharging. 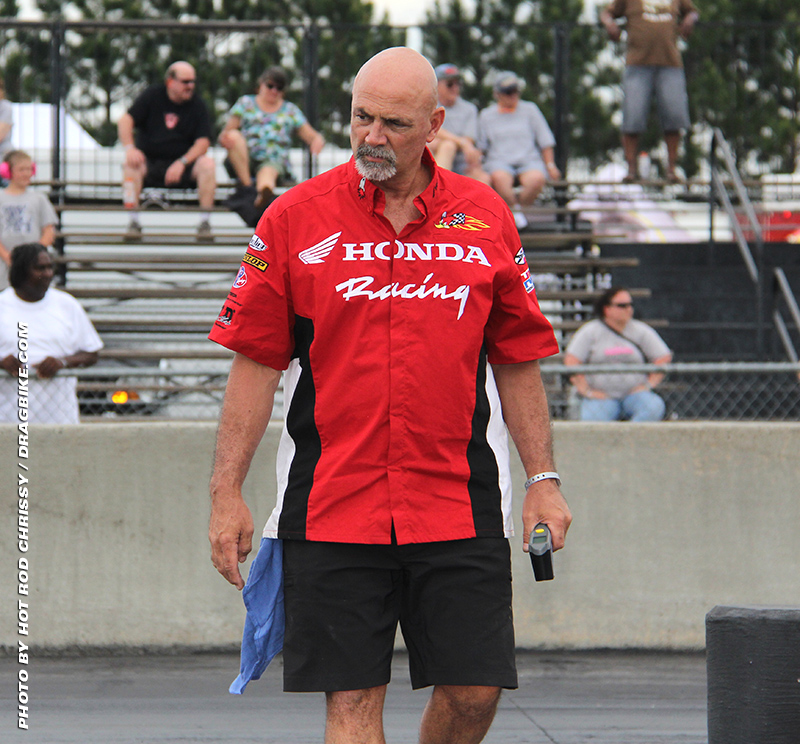 “I raced this one guy that had a turbo Kawasaki, and I killed ’em until about fourth gear, and then he came by me so fast I couldn’t believe it. I pulled him over and we talked. He said, ‘I’m not much of a rider, the motor does all the work on this thing.’”

Turbocharging was very much in its infancy during the ’70s – it was the dark art of the automotive and motorcycling industries. The term “turbo” captured the imagination of everyone. It was a household buzzword, one that portrayed connotations of speed and technology. “Turbo” was emblazoned on everything from clothing, electronics, toys, and everything in between. However, when it came to drag bikes, turbocharged engines were lethargic off the starting line. Kent was determined to find a way to harness the benefits of a turbo on the drag strip. 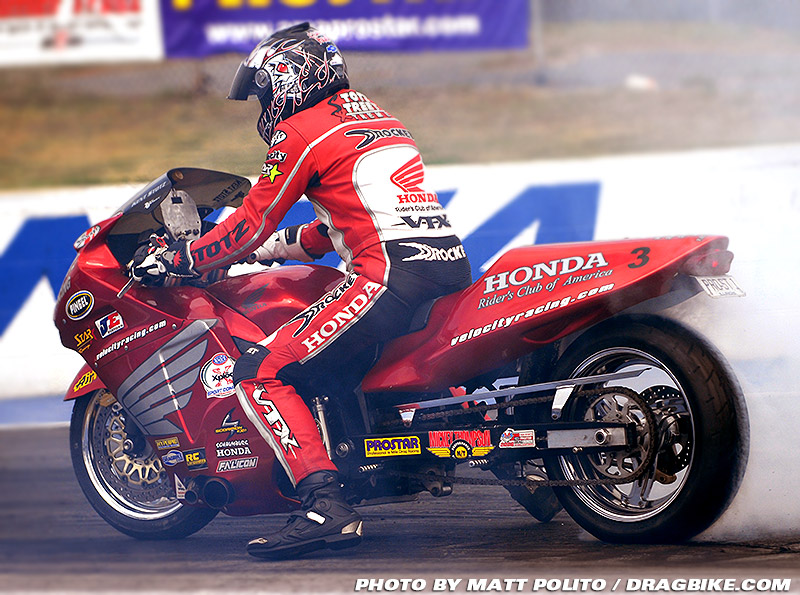 “So, I started racing turbo Kawasakis and learned how to make them leave [the line] as hard as a naturally aspirated bike.”

Kent continued to discover tricks to wake up these turbocharged motorcycles – he was going to make them competitive in the quarter mile. Eventually, he cracked the code that put his name on the map.
“In 1979 [I had] the first nine second street bike, I still got the time ticket.” This was his sign that turbocharging was going to be his tool for a successful racing future; it was his sign that his riding skill could win races. 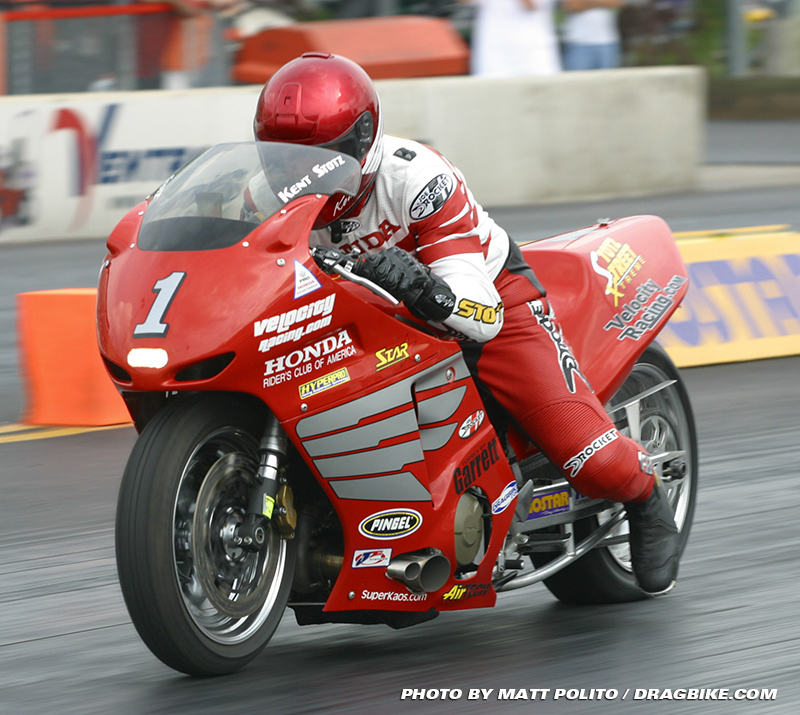 From that point forward, it was turbocharged drag bikes or nothing for Kent. Jump forward to the early ’90s and Kent had perfected his formula. In 1995, Stotz clenched his first Pro Street National Championship on an electronically fuel-injected and turbocharged Suzuki GSX-R. Success struck again when he claimed another national championship in 1998. With Kent’s achievements on the track starting to stack up, it was only a matter of time before he caught the attention of a big name in the motorcycling industry.

“In ’98 we won our second championship, and that’s when Honda approached me and said, ‘Can I do that on a Honda Blackbird?’ Honda hadn’t been into professional drag racing for 15-20 years. In 1999, I signed with Honda and we built the first Blackbird in 2000.”

Here was a large company knocking on Kent’s door, and they wanted him to campaign a motorcycle that basically had no history of drag racing. The Honda Blackbird came equipped with a high-strung 1137cc four-cylinder engine, so it was no slouch in stock form. But, how does someone get a production street bike like this to be successful on the track? If anyone knew, it would be Kent. And, as it turns out, he happened to be just the guy for the job. 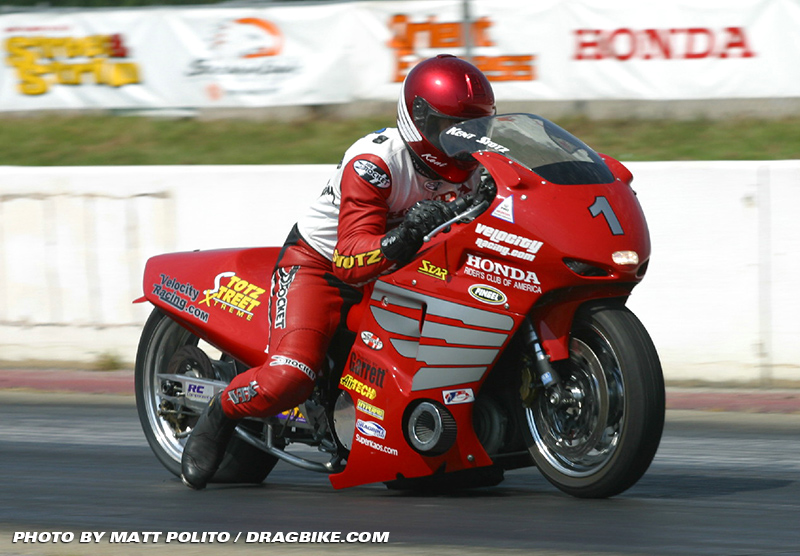 “In 2005 Honda asked me to run the CBR1000RR because they were no longer going to be importing the Blackbird into the States,” says Kent.

While the CBR1000RR had a smaller displacement engine than the out-going Blackbird, it countered with a lighter overall weight. In racing, power-to-weight ratios are the great equalizer.

If you follow Pro Street motorcycle drag racing, you’ll know that there’s a model of motorcycle that most competitors use: The Suzuki Hayabusa. The bike is a proven winning platform in the Pro Street series. However, the Stotz Racing team has always chosen less mainstream setups like the Blackbird and CBR1000RR. While this choice of bikes may make things more interesting, it certainly isn’t the easiest route to go. 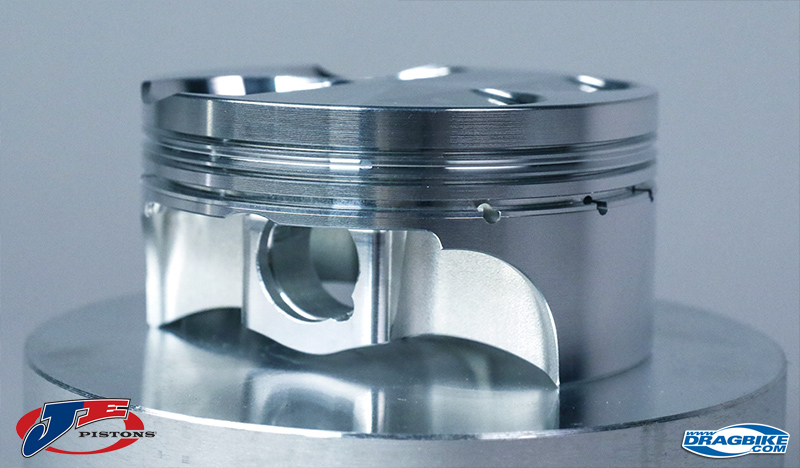 “I’ve always had oddball combinations. Even in ’95, the first [championship], there were only five turbos there and I came out on top. In ’98, when I won the championship, nobody thought a water-cooled bike could win because the engine was weaker. But, I won with that. And in 2001 and 2002, when I won on a Honda, when a Honda hadn’t won anything in professional drag racing in 15-20 years, that really shocked everybody. The one common denominator throughout all of that [success] is the development I did with JE Pistons to get these motors to live at the power levels we were putting out. That’s been invaluable.”

When you’re swimming against the current, so to speak, having confidence in the mechanical components that make up your machine is paramount. Given their extensive racing history, Stotz Racing knows the parts that they can trust when they push their bikes to the limit.

In 2008, Kent retired his spot in the racing seat and handed over the reins to his son Frankie. What has happened from that point forward is a continuation of the Stotz Racing competitive edge. 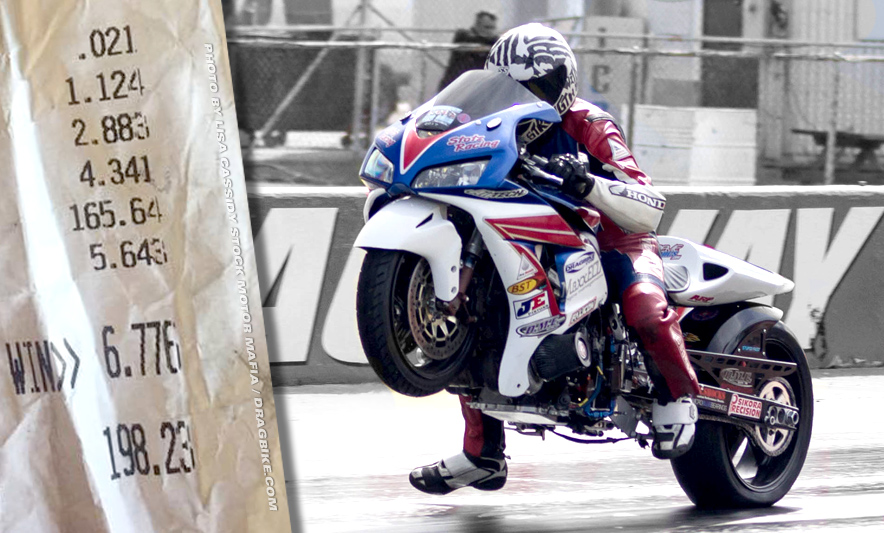 On October 7, 2017 Frankie Stotz broke the 1/8th mile Pro Street motorcycle ET (elapsed time) record on the CBR1000RR with a time of 4.34 seconds. You see, breaking records is just what this team does.

In drag racing, these are the metrics that matter. Regardless of what kind of bike Stotz Racing uses in the future, you can bet that it will be turbocharged, and you can guarantee that the team will keep breaking records. It’s just in their veins. 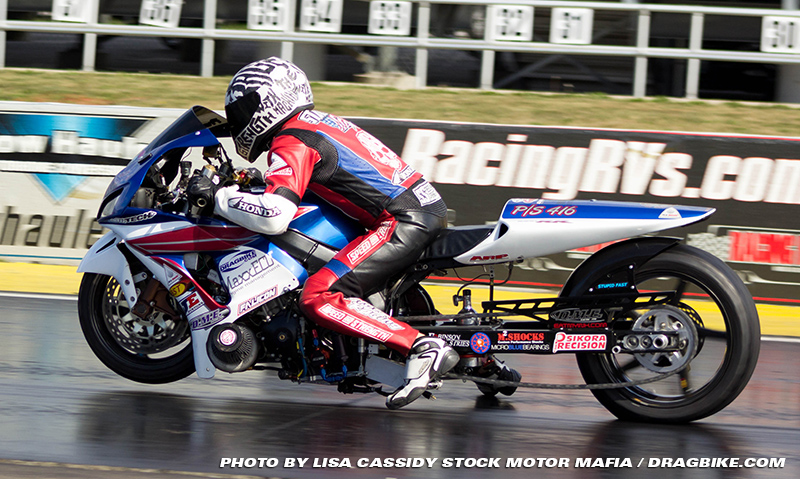