HomeNews / Race ResultsTurner and AHDRA Beat the Heat at The Rock

Turner and AHDRA Beat the Heat at The Rock

Turner and AHDRA Beat the Heat at The Rock

The new AHDRA all-American motorcycle drag racing series returned to its former North Carolina home this past weekend for the Nitro Spring Nationals, presented by Cox Double Eagle Harley-Davidson. And when the nitro smoke had cleared and the thunder receded into the Sand Hills surrounding Rockingham Dragway, it was home state hero Jay “Bulldog” Turner leading the pack with a Top Fuel win.

Turner—along with the rest of the field—trailed number one qualifier Ryan Peery throughout time trials and then again in eliminations. Peery’s 6.651 at 206.73 mph far outpaced Cordova winner Rich Vreeland’s number two qualifying 7.048 at 183.42. Turner was third and Walnut Cove’s Tyler Wilson fourth. Two-time defending NHRA champion Tii Tharpe, of Pfafftown, broke in qualifying and was unable to race. 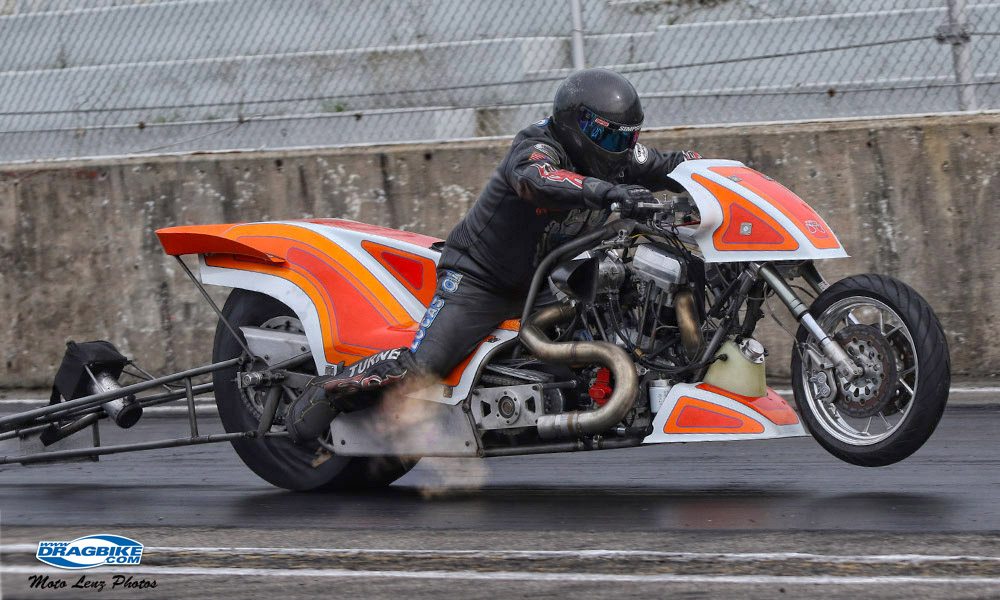 While consistent 6.60s aren’t exactly rotating the earth, they were doing the job in the typically hot, humid conditions of Rockingham in August, and Peery was low ET of every round of eliminations leading up to the final. He ran a 6.61 on a bye in E1 when Laurinburg’s Larry Stanley wasn’t able to make the call, and 6.633 to eliminate Wilson in the semis.

Turner’s 7s were advancing him up the other side of the ladder, beating Tim Kerigan in E1 and Pennsylvania Harley-Davidson dealer Vreeland in the semi.

Turner was riding the orange and white “Maddy” that Chris Smith qualified number one on at NHRA’s Indy 2 race. The lightweight, jackshaft bike represents a change for the Jay Turner Racing (JTR) team. 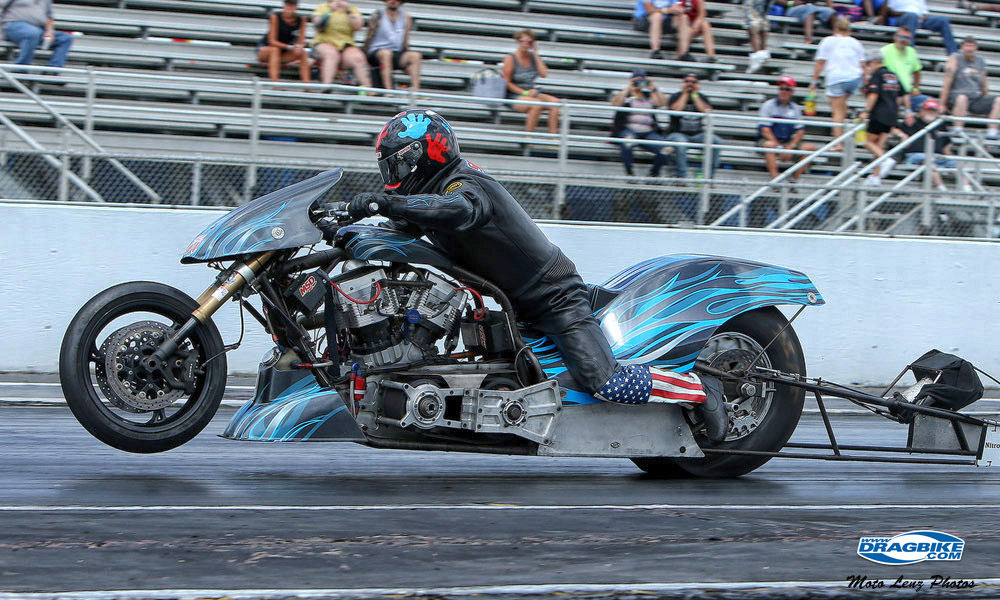 JTR tuner Rex Harris must have found some late afternoon magic in Maddy’s FuelTech ECU, because the bike sprung to life in the final. Peery ran another consistent number—a 6.63 at 206.45 mph—but this time there was a bike alongside him. Or ahead, actually, as Turner took the tree by .030 and carried that lead through to the stripe with a 6.61 at 201.10 for the win at the spiritual home of nitro Harleys.

“Finally got the clutch slow enough to not spin the tire,” said Harris. “Just needed a little less fuel to make it run to the finishline.”

While Indy qualifying hero Smith didn’t have a Top Fuel ride this weekend, he was the class of the Pro Fuel field on Peery’s “Big Nasty” and his 6.71 would have qualified him number two in Top Fuel. The 6.63 at 202 mph he ran in the final was uncontested, as opponent Sam White broke a jackshaft in the other lane. 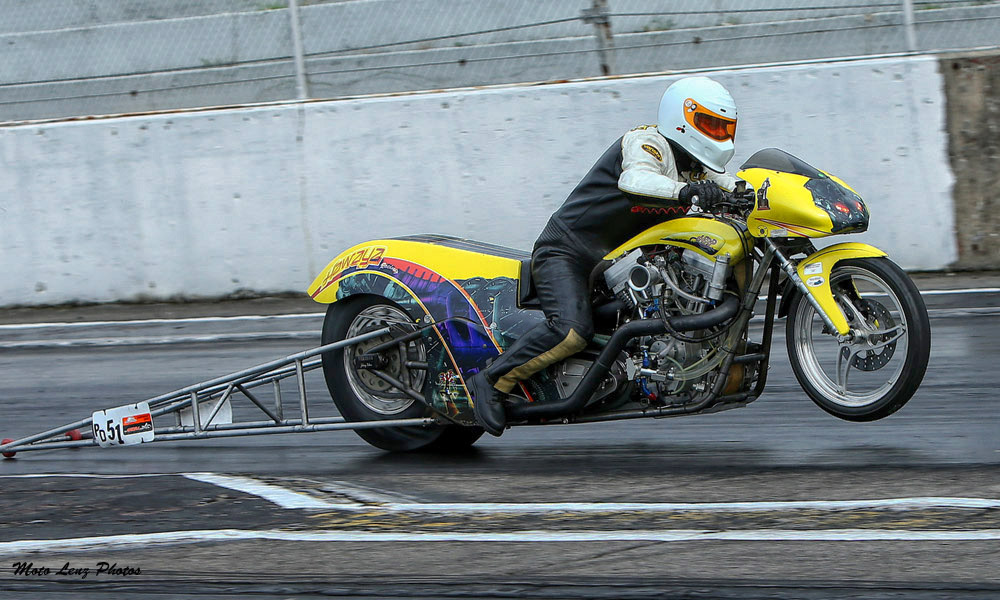 But White’s Pro Fuel woes turned to Hawaya Racing Pro Dragster glory, as he qualified number one with a 7.482 at 170.79 and took the carbureted nitro bike win.

White had it fairly easy on raceday, with byes straight to the final. Once there he was able to drive around Cordova winner Preston Bartlett’s 7.51 with a 7.42 after giving up .032 at the tree.

The internet-famous A-1 Cycles Extreme Bagger class saw Mike Beland set yet another record on his turbo bagger with an 8.477 at 166.01 mph in qualifying. All that performance went to naught on payday, though, as Beland lit a surprise redlight against Greg Quinn in eliminations. 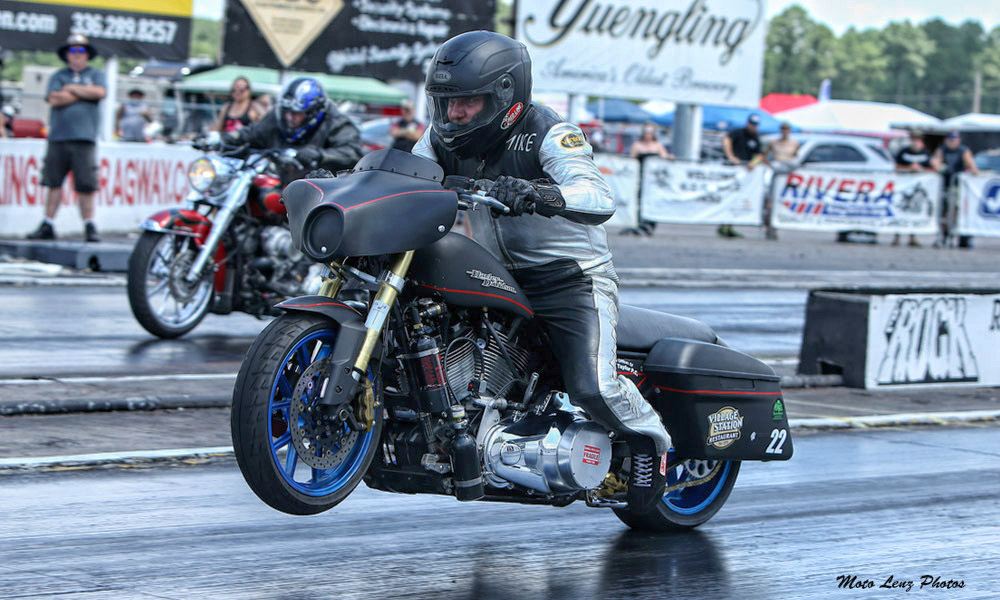 So Quinn gets the win, but that record-slaying turbo beast gets all the attention. Beland’s not so sure of the accuracy of the infraction but blames himself for squandering a performance advantage.

Quinn’s bike deserves some attention too. It’s an ex-Tii Tharpe piece built by Kendall Johnson. “It’s very erratic leaving the line, but very fun to ride,” Quinn said about the ProCharged, 124” Road King with a 150 back tire. 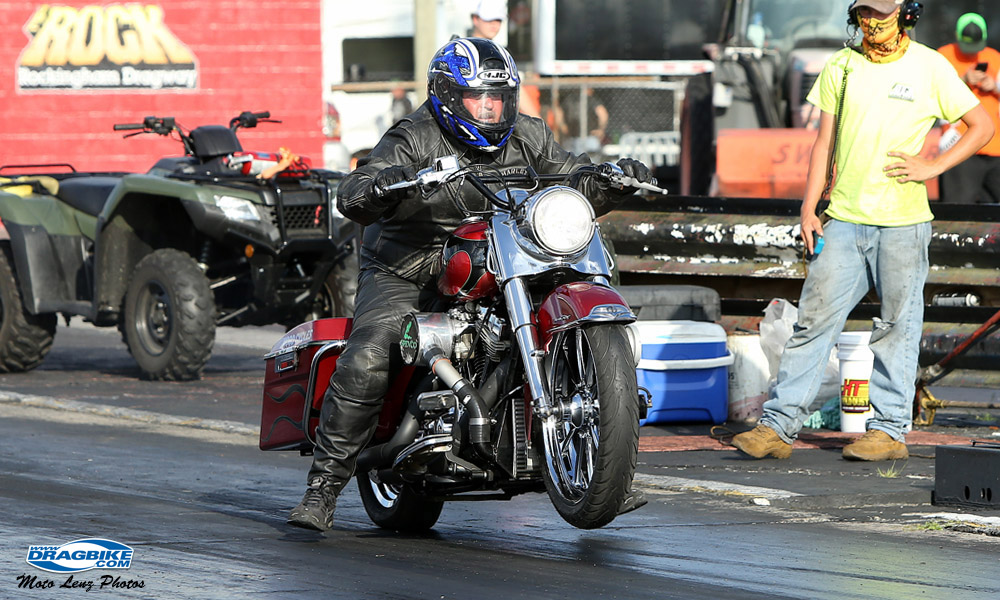 Speaking of bikes that get attention, few attract more that Pete and Keith Browne’s. Enough so, perhaps, to scare away the field as theirs was the only GMS Racing Engines Extreme Gas at The Rock.

But that didn’t keep the Browne’s from maintaining their competitive edge. “The first couple runs had some clutch issues,” said rider Keith Browne. ”But we came out Q3 and laid down a 6.90 at 196 and change. It drove through the clutch bad all through second and third gear, so it would have been a low .80 pass and might have got that elusive 200 to pop up there. So we were pretty happy with that being our first outing this year and a lot of room for improvement. Our early numbers weren’t near our best, so hopefully next outing we will make some noise.” A funny turn of phrase, seeing that their bike is the quietest tool at the track.

Cordova Zippers Performance Modified winner Jeff Workman took his second straight when he defeated redlighting Troy Young at The Rock. “It was great to go to the finals against Troy,” said Kentuckian Workman. “It’s been a long time since we was there together. 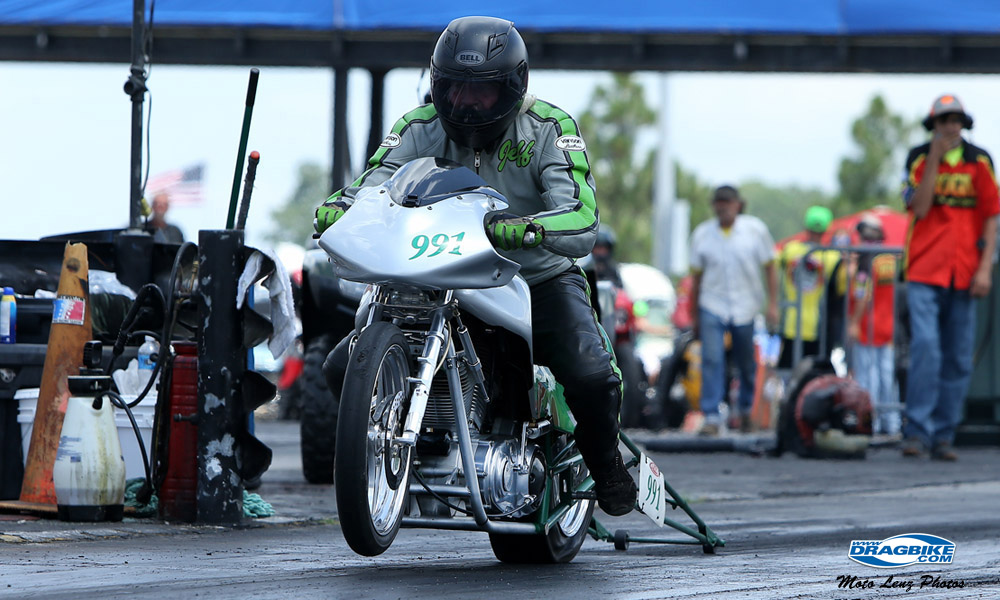 “It was a great weekend of racing. The rain stayed away the entire time, but it was very hot indeed. Like to give thanks to Powermist racing fuel for giving me the power I needed for the victory.”

Young recovered from the Modified loss to win Horsepower Inc. Hot Street. He gave up .091 at the tree to fellow finalist Scott Schenkel but had the beans to drive around. 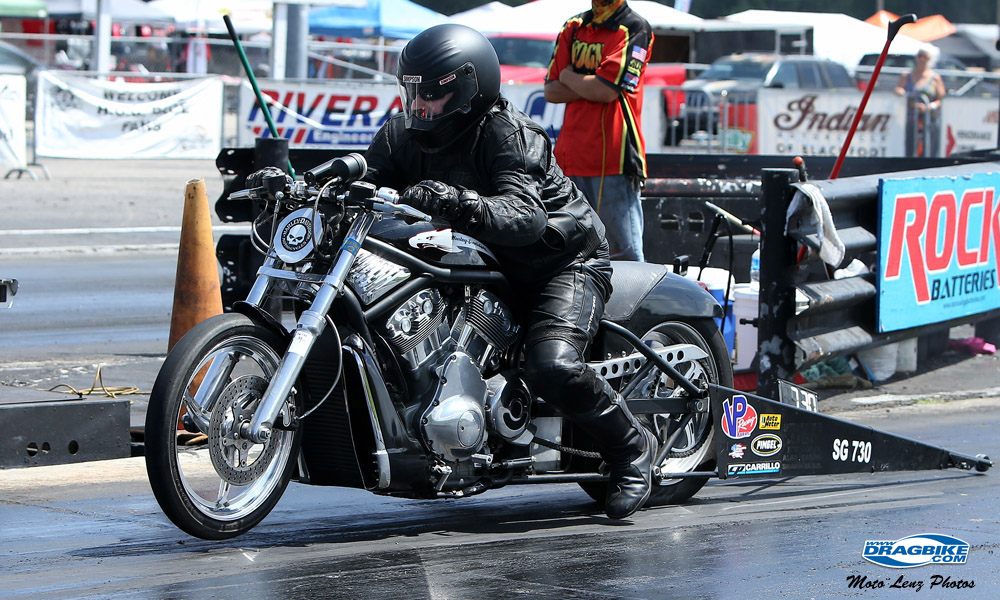 “I’ve only had that Destroyer since January and been out on it twice,” said Schenkel. “Was guessing that I could even run the 9.70 class. This is my first bigger race that I’ve won. The competition was great. I usually have terrible reaction times, but that 9.70 crew kept me trying for better and it worked.

“Great weekend and thanks to Bill Rowe and his crew for bringing the AHDRA back and giving us a place to race. Also wanna thank my fellow competitor Bob Maier. He helped with valuable vast knowledge of the bike so I could understand adjustments that were needed in the heat. Chad Hart of XLXB Horsepower came out to give me a hand running two bikes in two classes.” 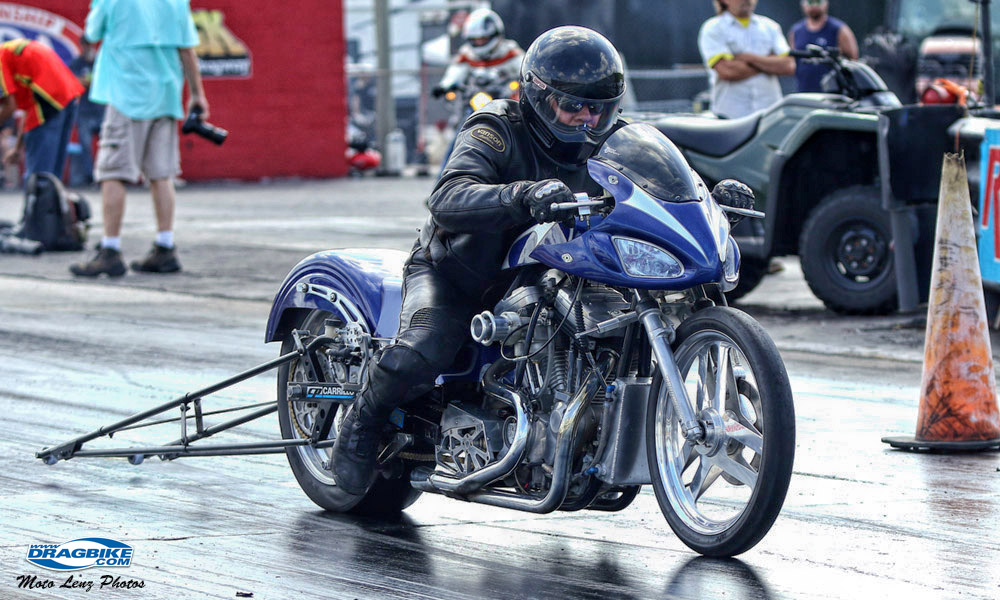 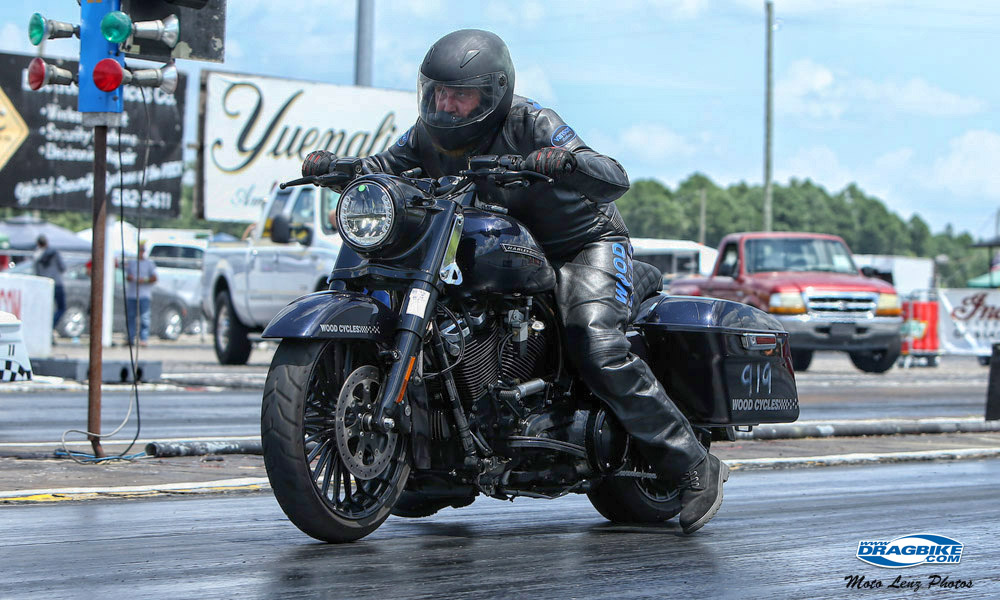 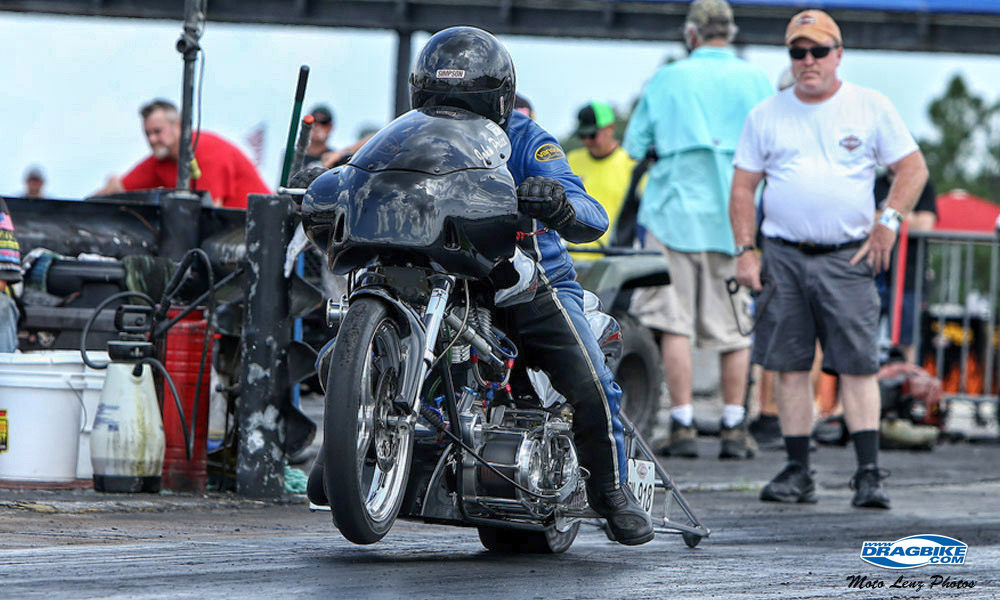 Cordova double winner Kevin Winters was again on his game at Rockingham, and again his Crete’s Performance 11.50 final round victim was Charlie Walker. After identical .078 lights. Winters held closer to the index with an 11.514 to Walker’s 11.589. 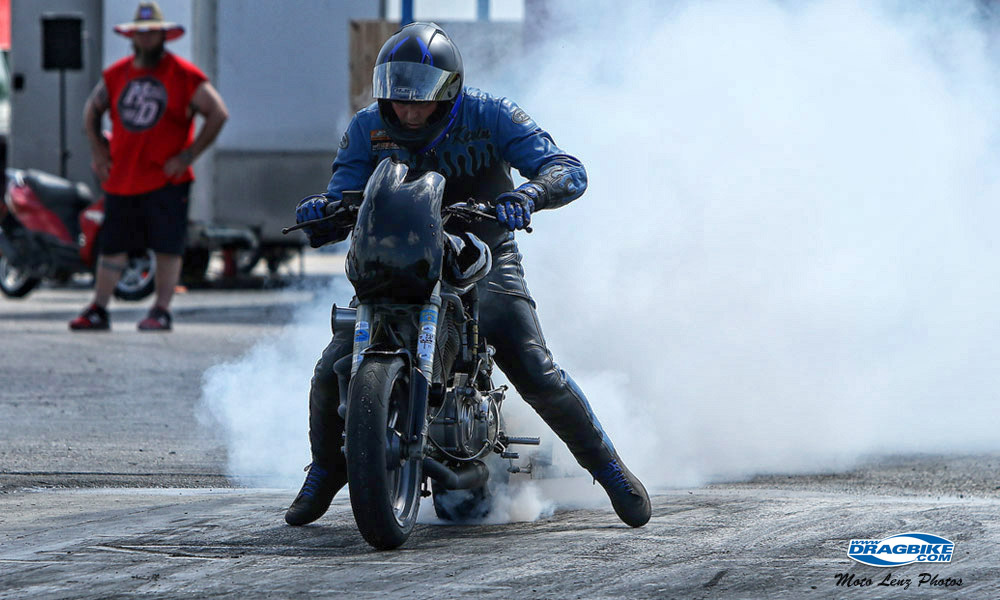 Winters didn’t double up this time, but he did go to another final, losing to Dale Houston in Workhorse ET. 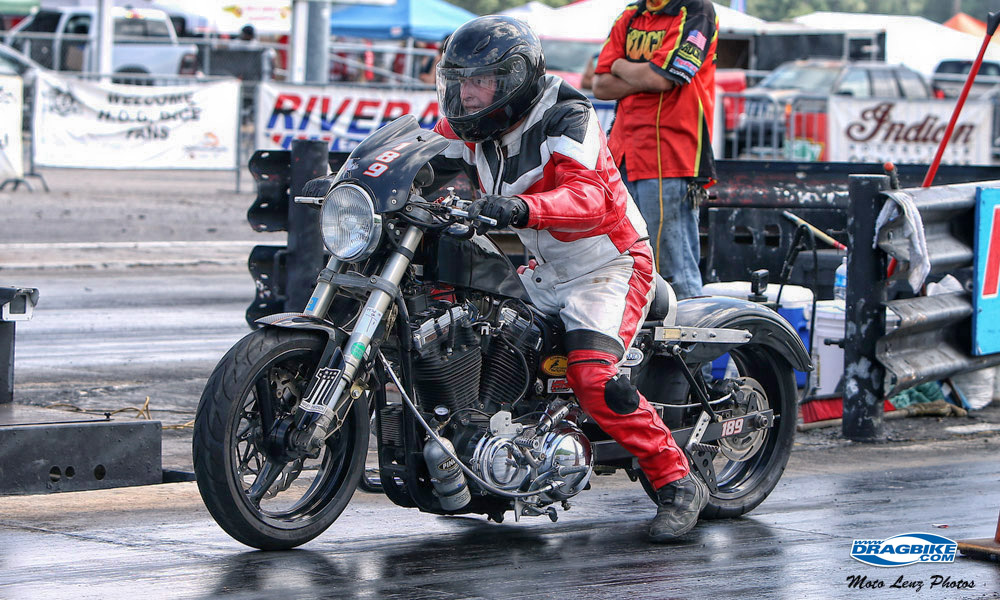 The next race comes up quickly for AHDRA, and it’s Sturgis on August 10-11!

Report prepared by Tim Hailey with photos by Mike Davis of MotoLenz.