Turner wrapped up the championship after qualifying second in the field. Defending event champion Rickey House took the pole with a 6.414 at 190 mph. 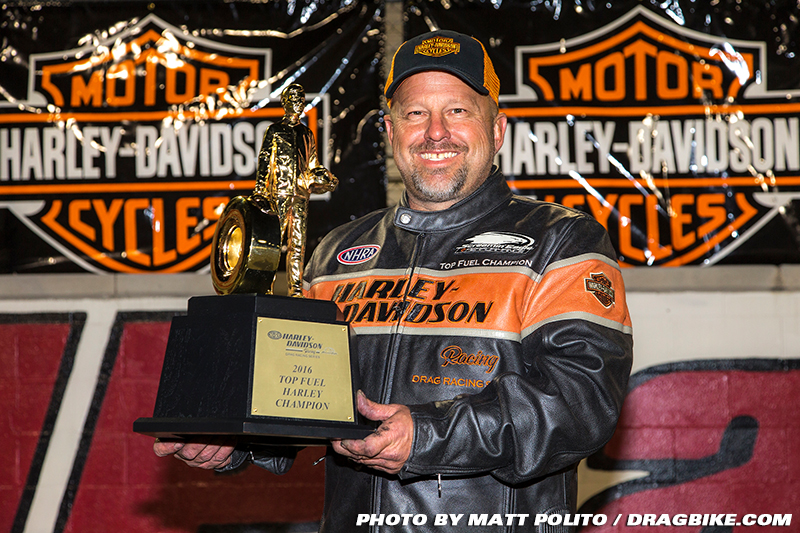 Turner and House met in the final where Turner ran a 6.369 seconds at 223.02 mph for the win as House crossed the centerline.

“We built a new bike for this year and won our first race with it,” said Turner. “We had problems in the middle of the year but we finished like we wanted to.”

It was Turner’s fourth HDDRS win of the season.

Turner held the points lead going into the event but when number two point holder Len Darnell did not make the event, Turner was nearly assured of the championship. Darnell slipped to third in the points when Kevin Boyer, who lost in round one at Vegas, garnered enough points for the #2 plate.

Janette Thornley cinched her second-straight NHRA Pro Fuel national championship after qualifying on the pole with a run of 7.505 seconds at 169.55 mph.

“Its quite an honor,” said Thornley. “People race their whole careers and never win a championship. To win two in a row is humbling.”

Like Turner, Thornley was virtually assured of a championship when the number two racer in the points, Dennis Fisher, failed to make the Vegas finals. 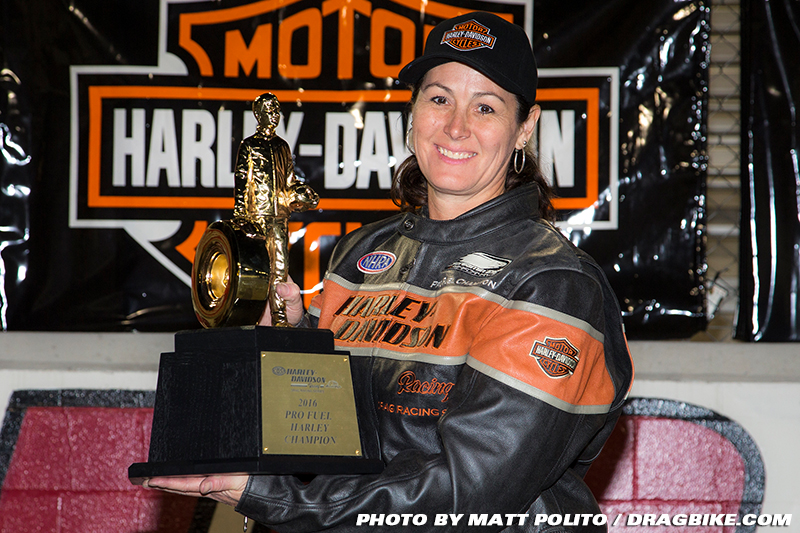 With the championship locked up, Thornley lost in round two of eliminations, falling to Bill Bentz, 7.40 to 7.48. Bentz met Quinn Olson in the final.

Olson earned the win in his only HDDRS appearance of the season.

Pro Gas
Charles Whitfield took the Pro Gas title, qualifying #1 and running a 10.112 in the final round as opponent Ron Roti got out of the groove and could only produce an 11.84.

Street Pro
Street Pro saw Donnie Doubleday take the final round win over Augustine Herrera. Doubleday turned in the quick lap of the event at 9.090 seconds in the final against Herrera’s 9.854.

Hot Street
In the Hot Street class, West Coast motorcycle drag racing icon Augustine Herrera took the top qualifying spot and the event final on his V-Rod. Herrera, appearing in his second final round of the event, got the holeshot and pulled away from Larry Fore in the final, 11.33 to 11.58.

ET
In Motorcycle ET Kahea Woods put together a great package, cutting a .028 light and running a 8.827 on an 8.82 dial in as final round opponent Pete Miclette got a one-thousandths holeshot but was only able to run a 8.860 on an 8.83 dial.