HomeSanctionsNHDROTwo out of Three ain’t bad for NHDRO at Edgewater

NHDRO’s three races in one weekend format has the added advantage of completing races despite weather curveballs. While the Midwest’s largest motorcycle drag racing series provided the Edge at Edgewater Sports Park on Friday and Saturday, Sunday rains brought in plenty of Water. And although not a wheel turned at NHDRO’s July Nationals presented by APE Raceparts on Sunday, racers left the Ohio track with points, NHDRO Big Checks, and no dangling questions about how classes will complete their eliminations.

“NHDRO was a blast as normal,” said Jeremy Teasley. “(NHDRO owners) Niki and Brian Welch did an awesome job.”

In both instances, Edgewater regular Jeremy England was Teasley’s all-Jeremy final round opponent. “Friday they did the Shootout for Top Gas and I made it to the finals with Jeremy England. Due to rain we split. Then comes Saturday and we meet in the finals again.” 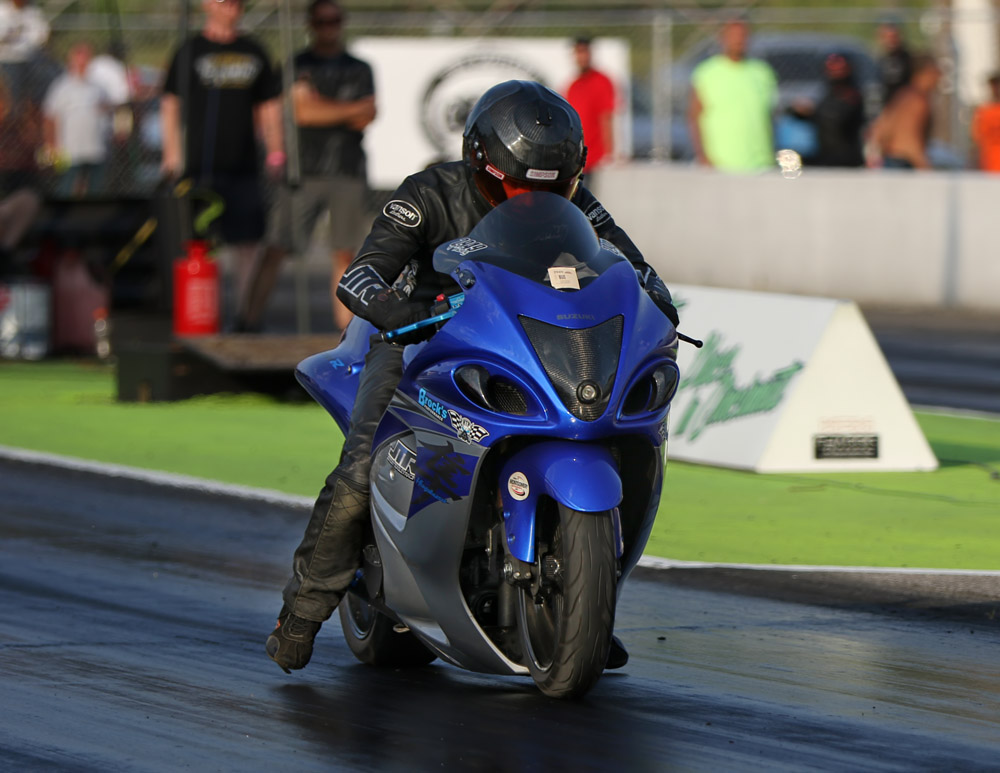 There was talk that the two Jeremys would burn out each other’s similarly prepped, nitrous-huffing, no-bar Suzuki Hayabusas, then mount their own bikes to stage. That would have been fun and cool, but it didn’t happen.

Teasley took the tree .015 to .082, giving him a gap wide enough to back off to an 8.26 and still take the holeshot win against England’s otherwise sharp 8.20. “I knew it wasn’t going to be easy,” said Teasley. “I got lucky and got the tree, and it was enough to hold him off.” 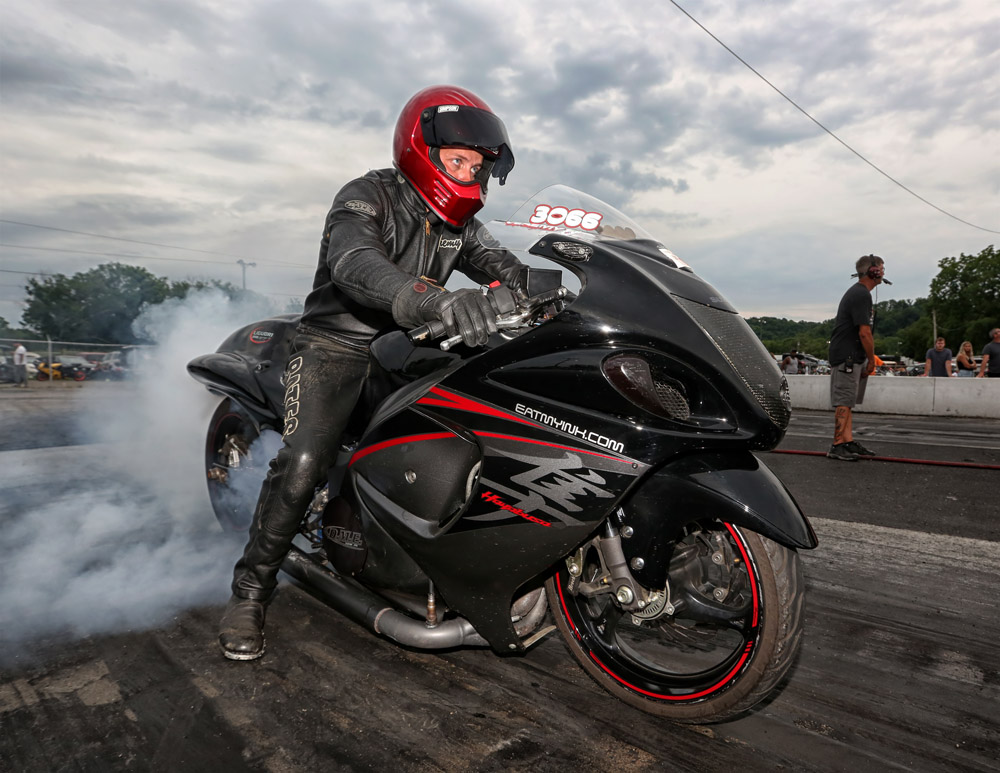 England wasn’t finished splitting Shootout pots, as he and Greg Mallett—also on a no-bar ‘Busa—split the Delay Box Shootout pot rather than wait it out overnight. 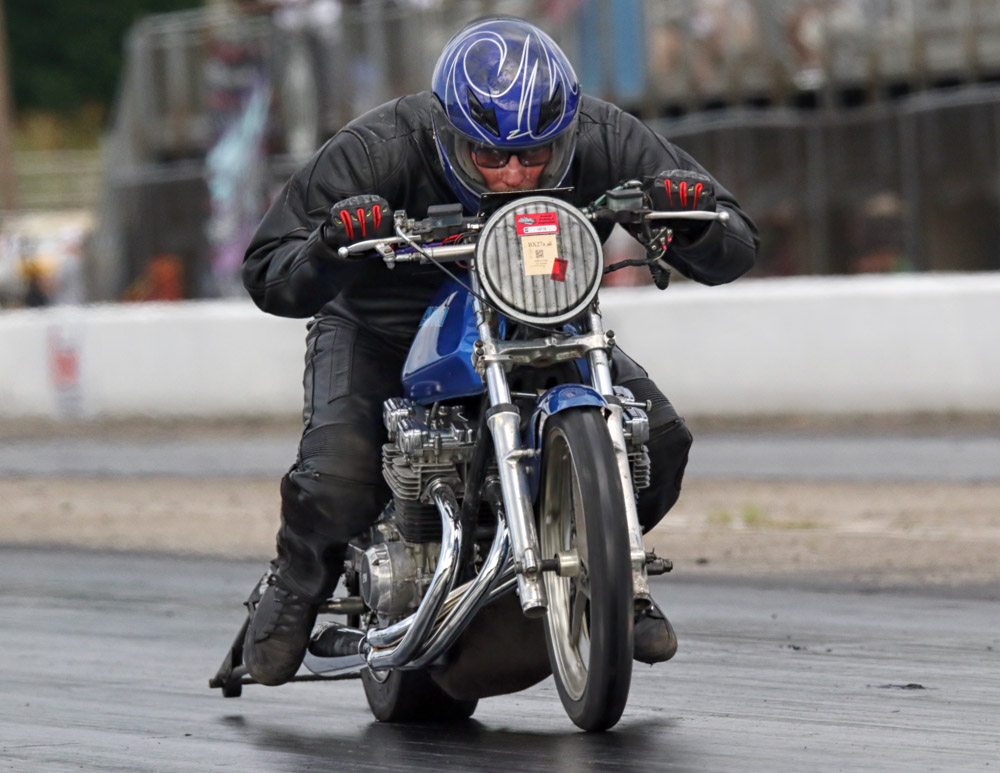 Joe Klemme and Rylan “Birthday Boy” Rowe likewise split the No-Box Shootout, and Klemme backed that up with the Advanced Sleeve Dirty 30 win on Saturday.

“As always, my win was a total KPM Racing team effort,” said Joe. “I would like to give special thanks to my friend and pitman Tim Genung for enduring the heat as we tried to wade our way through three classes, successfully getting it done in one. Also a big thanks to my brother Tom Klemme at KPM, who builds and maintains our stable of dragbikes and our good friend John Mealy who pits for Tom this year and is also the owner of several of the team’s bikes. I would also like to give thanks to my brother in-law Ed Grothus at GDB, who did some fabrication and welding on a part on the winning dragbike that was instrumental in it’s success this weekend. 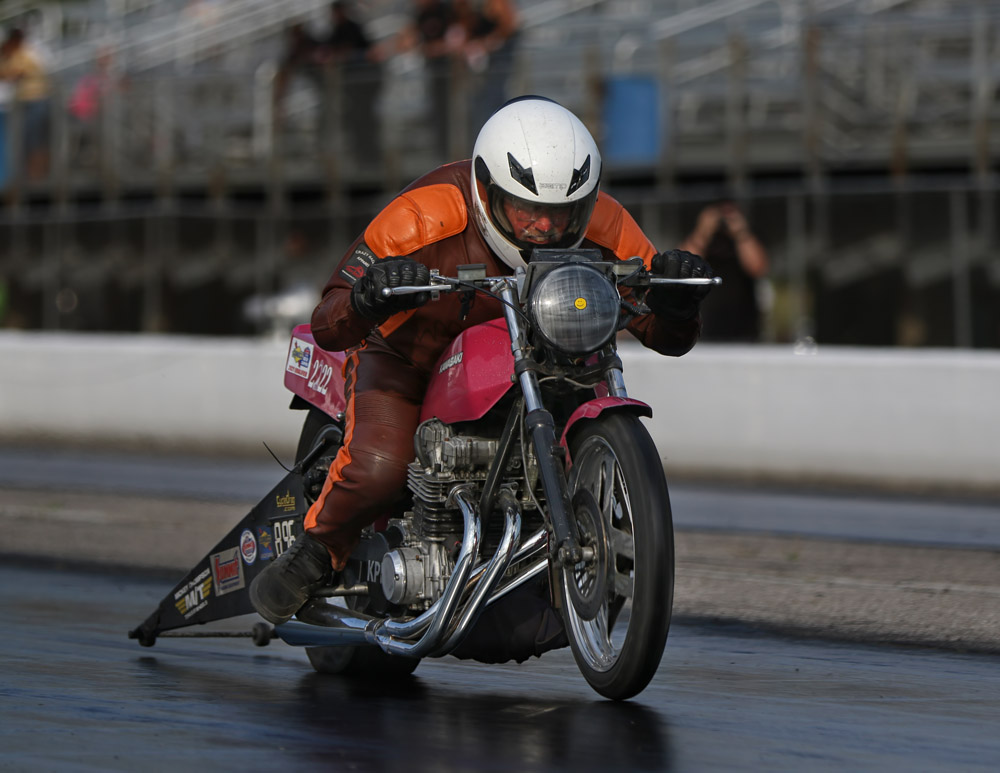 “Last but not least, thank you to Tim Hailey at eatmyink.com and Brandi Neithamer at dragbike.com for the continued media coverage.”

Alongside Joe Klemme in the winners circle you’ll often find his brother Tom, and that was the case at Edgewater. In fact, Tom won MPS Pro ET despite having to race Joe in the first round.

“NHDRO has a hard system to beat, and I had to race my brother in the first round,” reported Tom. “You have to draw cards for pairings for the first few rounds until they get under sixteen bikes. Joe and I drew threes in the 1st round.”

“It is a total team effort. I couldn’t win without great help from Joe, John Mealy and Tim Genung.” 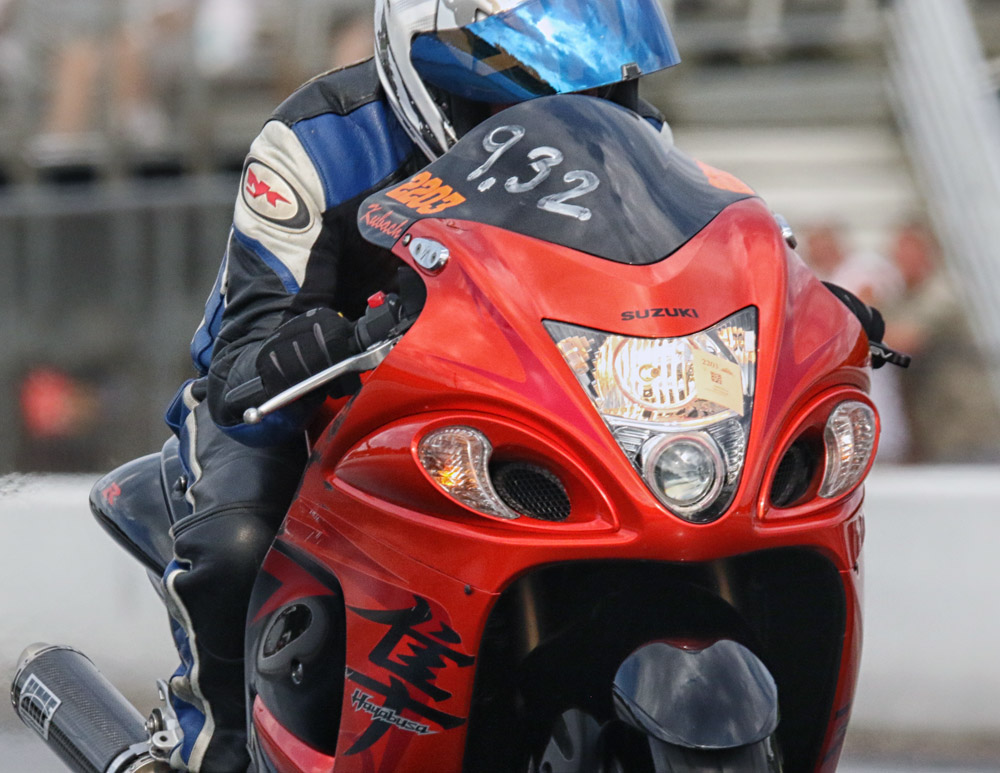 “It’s only my second time out this year,” noted Adams. “It’s been a busy baseball season with my two boys, so I was excited to get out and go racing! Went up against some tough racers in Street ET and came up with the win.

“I would like to thank Greg and Maria Kubach, Tyler Kubach, Joe Marasco, and my wife and kids for all their support.”

“I couldn’t do any of this without my family and team behind me,” said Himes. “Thanks to my dad for supporting me and helping me with whatever I need, Jeremy Teasley with the tunes and constantly helping with the bike, and Brian Welch for putting on such a awesome event! 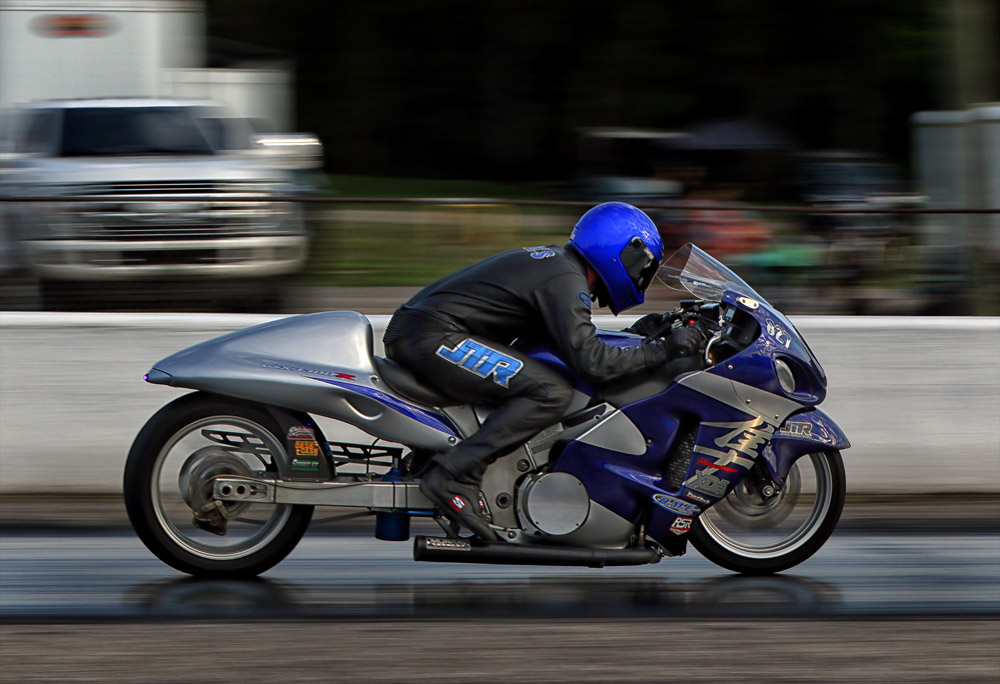 “This bike is basically all new this year and it’s proven itself every race. Hopefully we can keep this win streak going!”

Box Shootout splitter Mallett qualified number one in the 8.90 index class with an 8.905 and lost to Joe Klemme in E2. 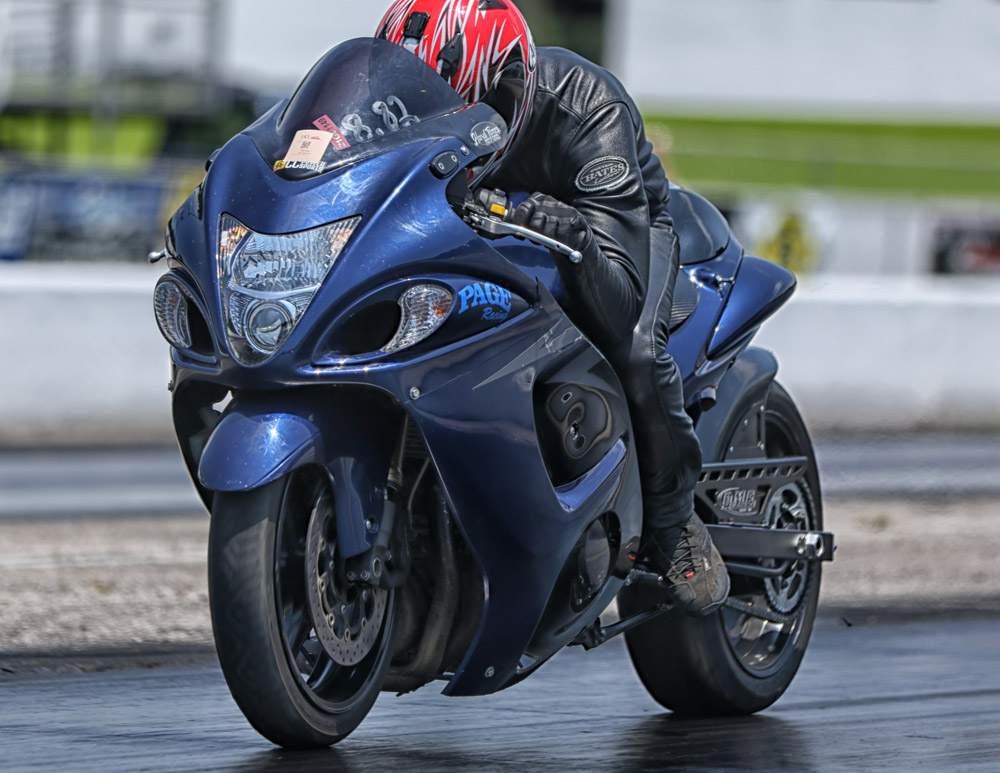 NHDRO Road Course Shootouts were run Friday and Saturday nights under the lights, with the road course requirement run as the sun was low in the sky for the instant green, no-time class.

“I would really like to thank my best friend Bill (Deshong) for building the bike and Nathan (Hollingsworth) for tuning,” said Fleener. 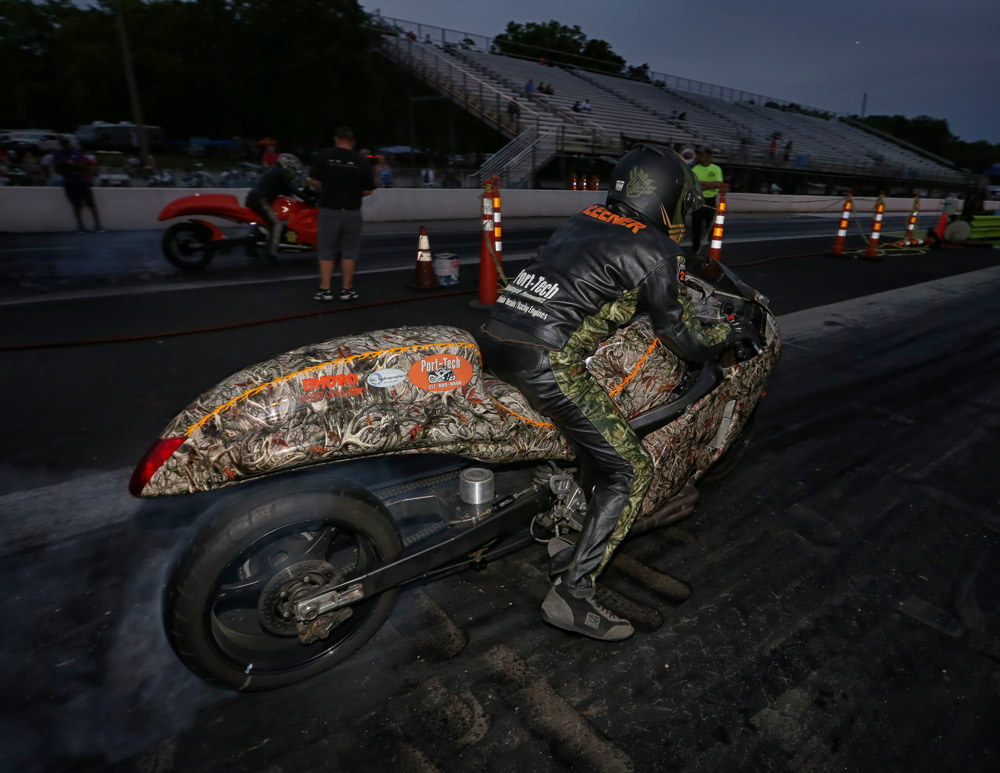 Saturday’s Road Course Shootout final went to Justin Hodge over Louisville’s Brandon Holland. “Thanks to Brian from NHDRO for having the events, and thanks to Joe Marasco from MSP for all his help tuning my bike. And thanks to Tyler Hodge for his help lining me up.” 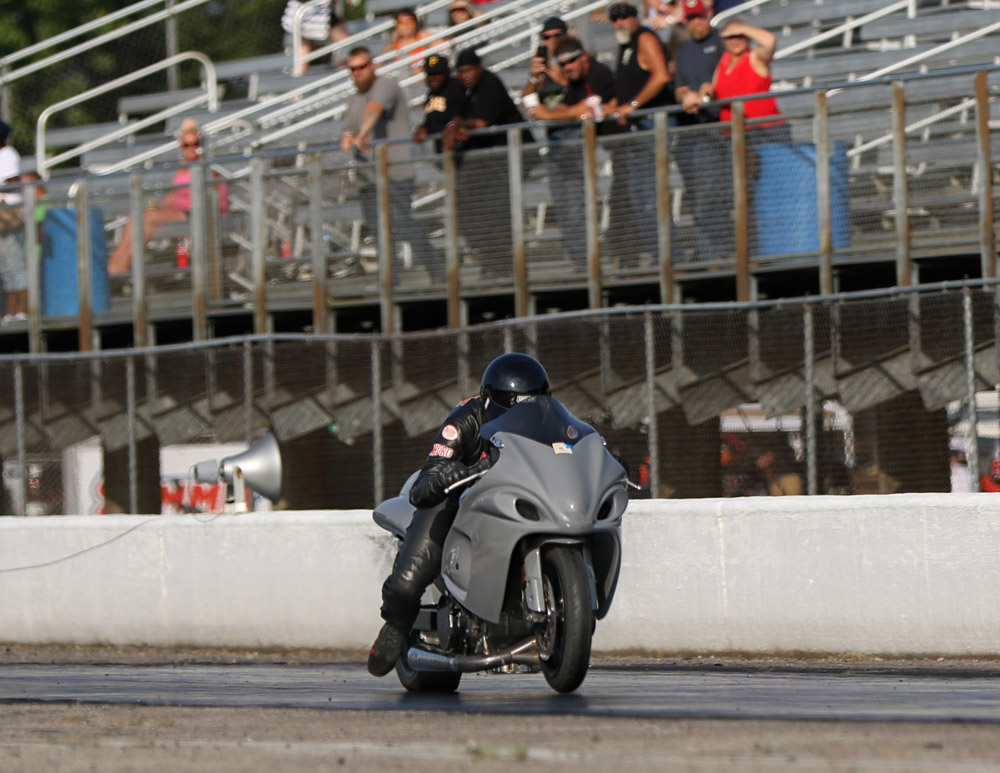 The NHDRO family includes lots of winning lady racers, but Friday at Edgewater saw an All-Female Shootout. Ceslie Shellhaas took the win against Allison Neeld just days before her birthday.

“It was a fun weekend!” said Shellhaas, one of a family of racers. “This was my third time out to race this season, first NHDRO event of the year, and first win on my green bike. 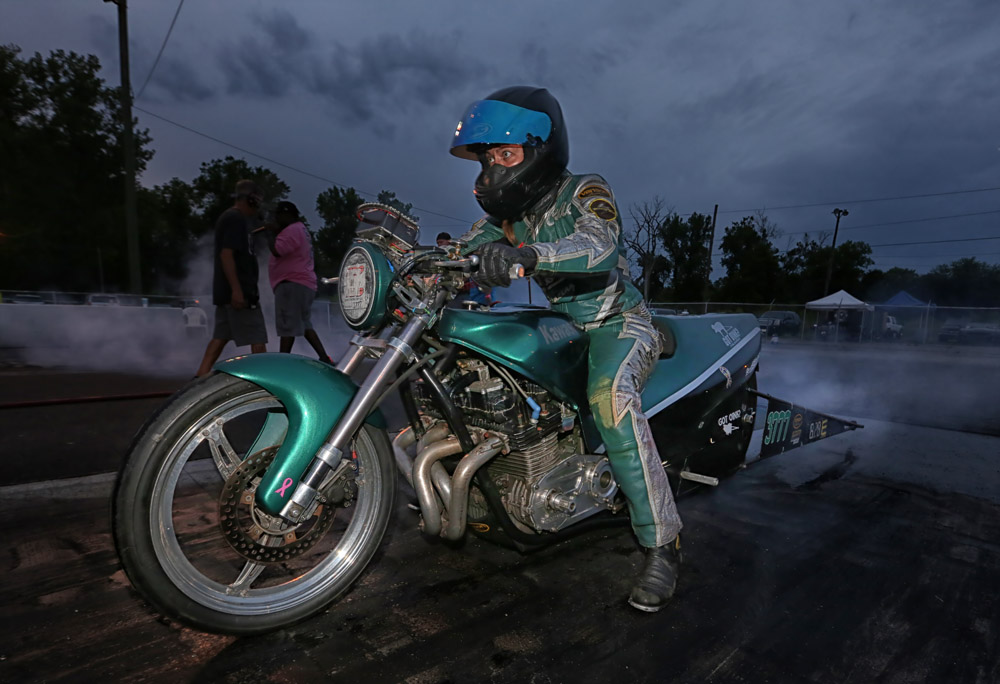 In addition to the pot, Kenneth Smith put up $150 for the All-Female Shootout winner and $50 for the runner-up. High Risk Motorsports offered up a free sweatshirt to Ceslie for the win and there was free beer and pizza for all female entries (pizza and cupcakes provided by Vansboy Racing).

The most interesting VooDoo Grudge race of the weekend must have been the pairing between Odell Williams Sr. and Jr., with the younger Odell taking the win over his old man. 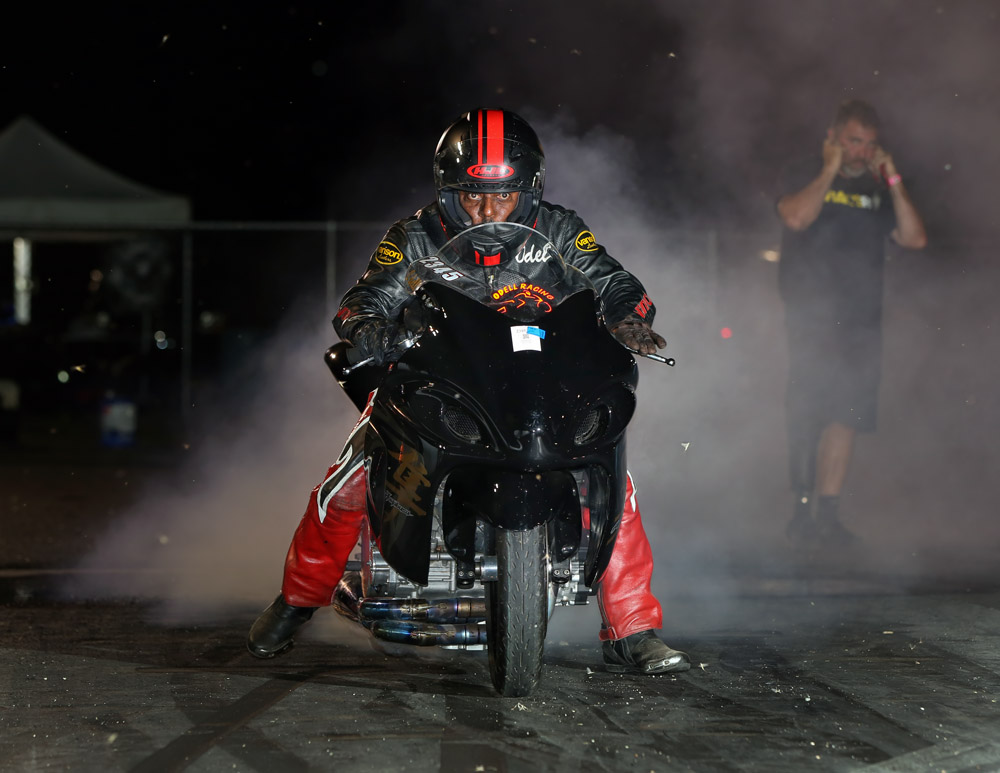 The best news of all is that NHDRO is running round robin at Edgewater, returning to the shady, park-like, family-friendly track just outside of Cincinnati on August 5-7. Join the NHDRO family and show us what you got!