Seven-time land speed record holder Valerie Thompson became the first female member of the Colorado Mile 200 MPH Club with a top speed pass of 201.2 mph on her Quicksilver Powersports Lubricants/CTEK sponsored BMW. Thompson premiered an Iron Horse Motorcycles prepared motorcycle with an all-new hand built racing engine provided by BMW Motorrad, the first of its kind to see competition in the US.

The Colorado Mile, presented by US Mile Racing, is a new competition for the 2015 land speed racing schedule. The event is held at Front Range Airport in Watkins and is Colorado’s first one-mile speed event. US Mile Racing also hosts the Texas Mile where Thompson dominated in 2014 with a personal best speed of 217.7 mph. 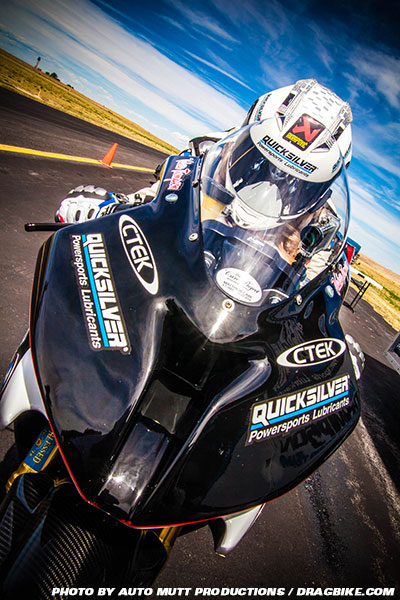 “Valerie is a true champion and fierce competitor, so we decided to provide her with a S 1000 RR Stage 3 HP Race engine, specifically the ‘Power Motor’ variant. This is the first time we have imported a Stage 3 engine to the US from the BMW HP race shop in Munich. Producing 215 hp from 999 cc, it’s the same engine specification BMW Motorrad offers teams participating in the FIM WSBK series,” said Mike Hernandez, Manager BMW Motorrad Parts and Accessories.

“This was our first competition after several months of event cancellations at Bonneville. In addition to the BMW engine, we were testing a new Akrapovic exhaust system and other new equipment,” said Thompson. “The 8300+ foot elevation near Denver is much higher than where we normally compete, so we knew optimal performance would be a real challenge. Despite that handicap, we learned a lot and I know the Quicksilver Powersports Lubricants BMW will go much faster at other venues. I’m very excited about our next race on the salt,” said a confident Thompson.

Thompson’s next competition will be the prestigious Mike Cook’s Bonneville Shootout September 17-21, featuring the world’s fastest streamliners and motorcycles.

Colorado Mile Background
Organized by US Mile racing group, the Colorado Mile welcomes drivers of street legal sports cars, motorcycles, trucks and concept racecars. It features amateur participants, novices and professional racers. The concept is simple: drivers go as fast as possible for one mile. The goal? To set the fastest MPH record at the event, be the fastest car, truck or motorcycle in their vehicle’s class or just to achieve a personal best top speed.