Vance & Hines Inducted to Motorsports Hall of Fame of America 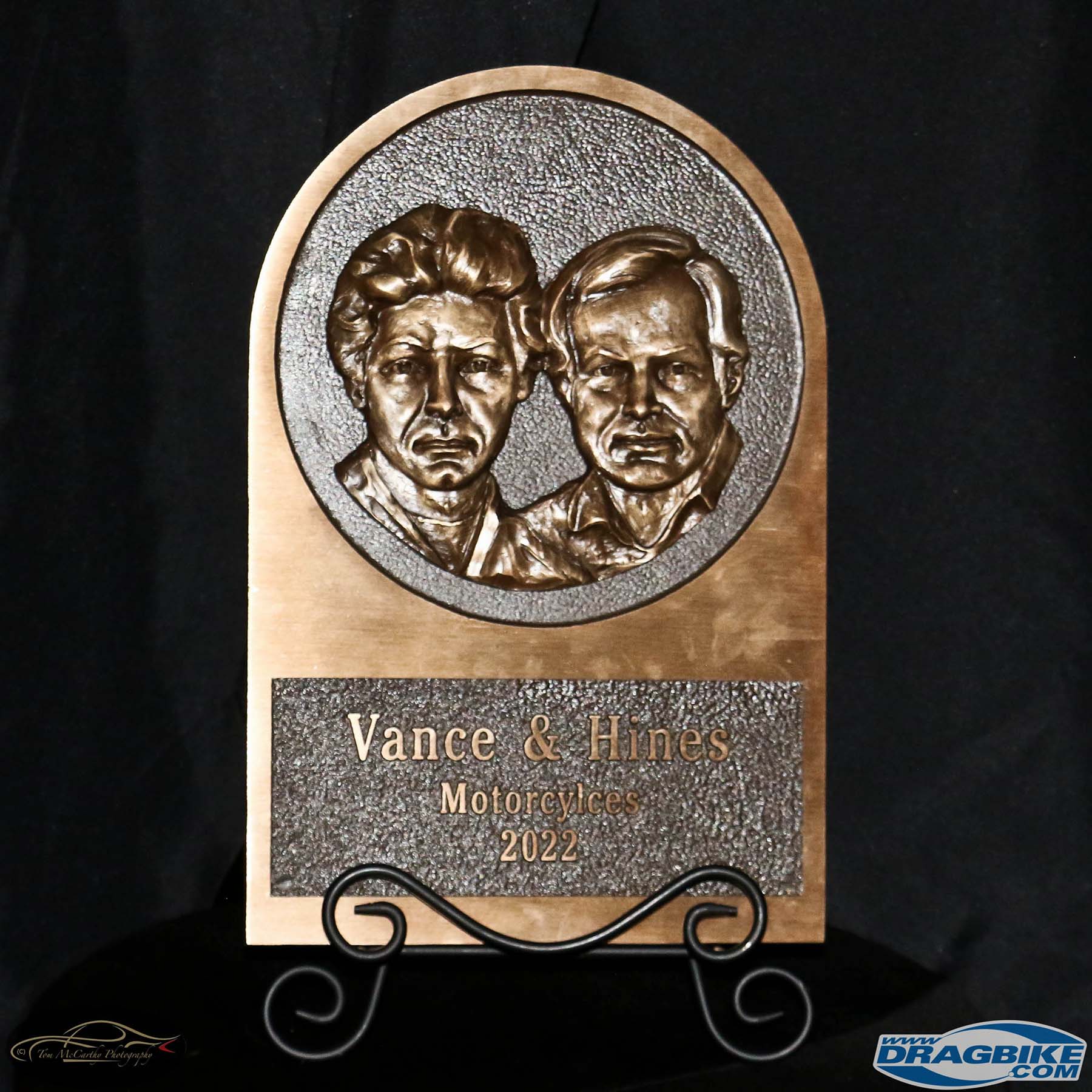 Vance & Hines Inducted to Motorsports Hall of Fame of America

On Tuesday evening, March 8th, 2022, the most prolific team in motorcycle drag racing history was inducted into the prestigious Motorsports Hall of Fame of America, located in Daytona Beach Florida. Terry Vance and his partner Byron Hines took to the stage to receive their richly deserved accolades among the class of 2022, along side racing greats: Dick LaHaie, Jack Roush, Pete Brock, Banjo Mathews, Denise McCluggage, Raymond Parks, and Helio Castroneves.

Persons elected into this lofty Hall Of Fame must be voted upon by 200 members of the MSHFA, one half of them are historians and one half inductees. Names like Mario Andretti, Shirley Muldowney, Parnelli Jones, Don Garlits and Don Prudhomme, as past inductees, should ring a bell with most who love racing. 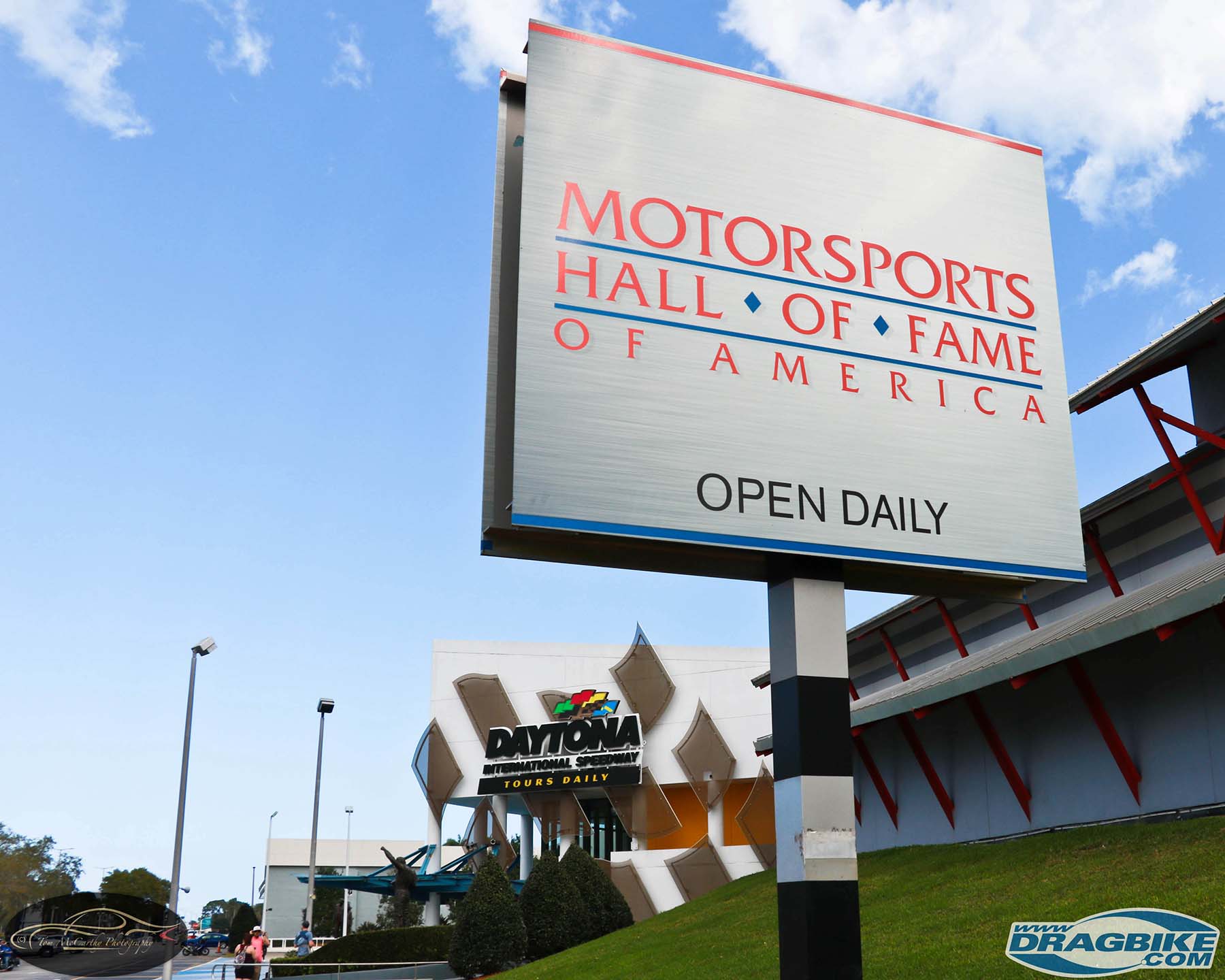 During the gala black-tie evening event, NHRA announcer Alan Reinhart embraced the honor of calling Terry and Bryon to the stage, as family, friends and distinguished guests applauded. “I could go on all night about these guys. They’ve accomplished so much. It would take me days to tell you all about them. It’s not just about their 14 Championships: that was just the beginning,” stated Reinhart. 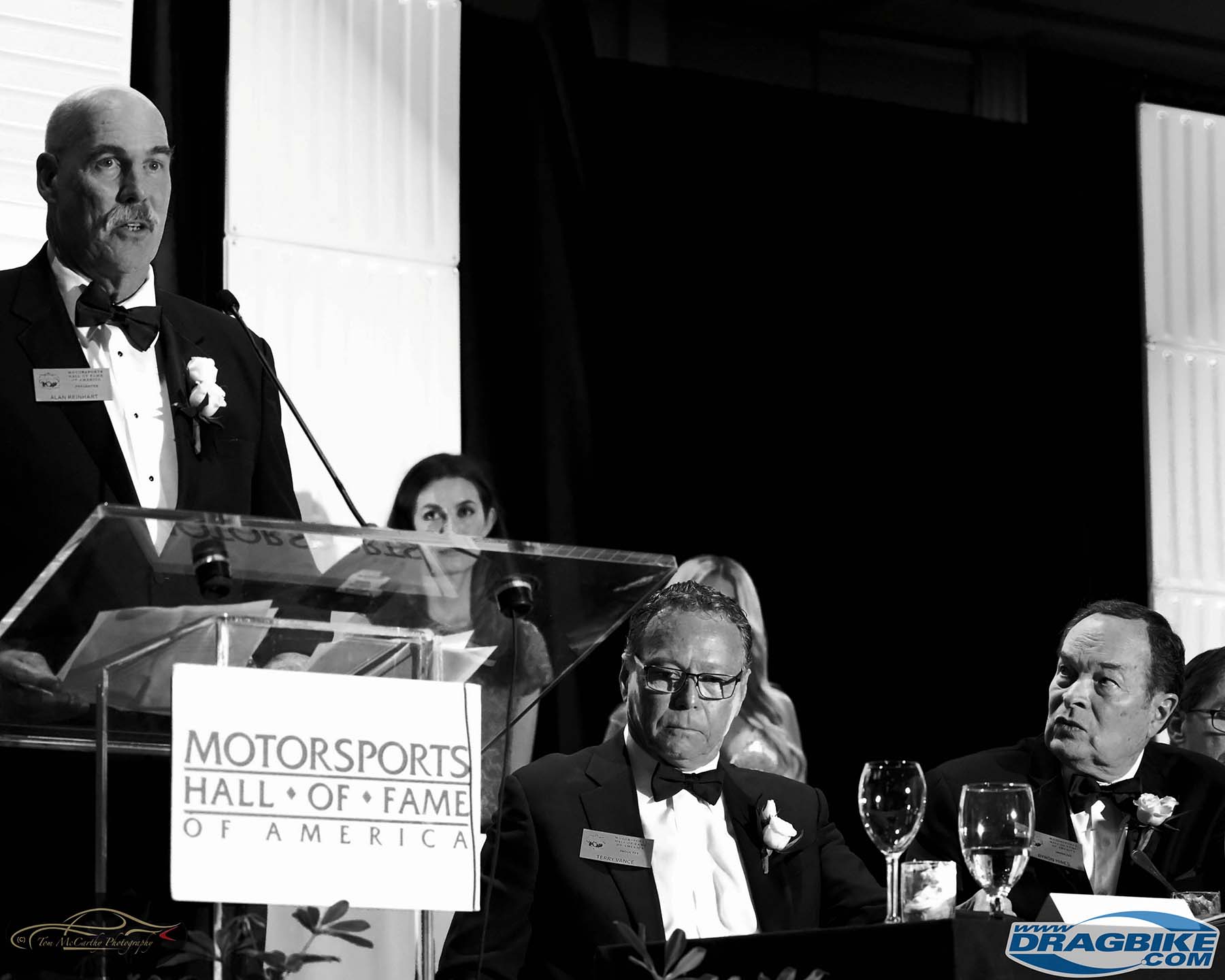 The saga of Vance & Hines began in 1970, as the two drag racing friends from southern California came to work at the new start-up motorcycle performance business, R.C. Engineering. The confluence of events as they came of age as teens, happened to coincide with the same time frame that organized motorcycle drag racing was just beginning.

In 1970 Roy Strawn had just formed the AMDRA, the American Motorcycle Drag Racing Association in conjunction with the NHRA. Terry and Byron were local bracket racers at their home track, Lions drag strip. On Wednesday nights, Byron and Terry could be found out there on the 1320 just getting their feet wet on their street bikes.

Byron had already been hot-rodding his new 750 Honda, that had just been released by Honda to the USA market. Terry was stealthily borrowing his dad’s bike, making a few laps at Lions, when he and Byron first met at the track. Byron needed go-fast parts and heard about Russ Collins new business, R.C. Engineering and dropped by for goodies. Russ recognized Byron’s talent right away, his bike was fast, no leaks and it was immaculately clean. So Russ offered Byron a job doing tune-up work and lacing wheels. 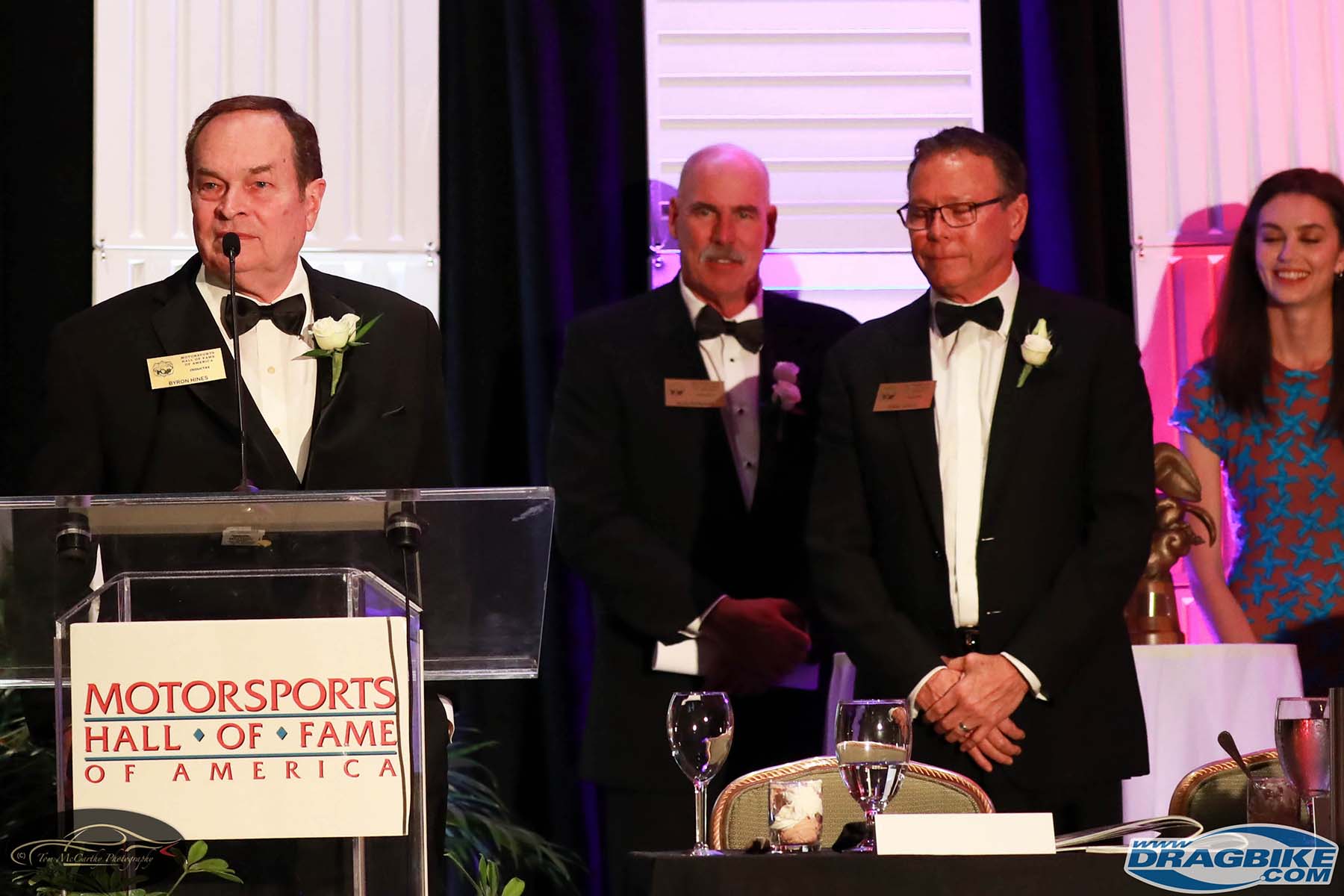 Byron was fresh off his tour of duty in the Army from Viet Nam, where he had extended his two tours of duty. Sergeant Hines spent the better part of two years doing helicopter work, arming Huey helicopters. He grew up on a farm in Nebraska and was no stranger to a toolbox. As Byron worked his way along at R.C., he was turning wrenches by day, while racing at night and weekends at Lions. It wasn’t long before Byron was going faster and quicker than his boss on their 750 Hondas. 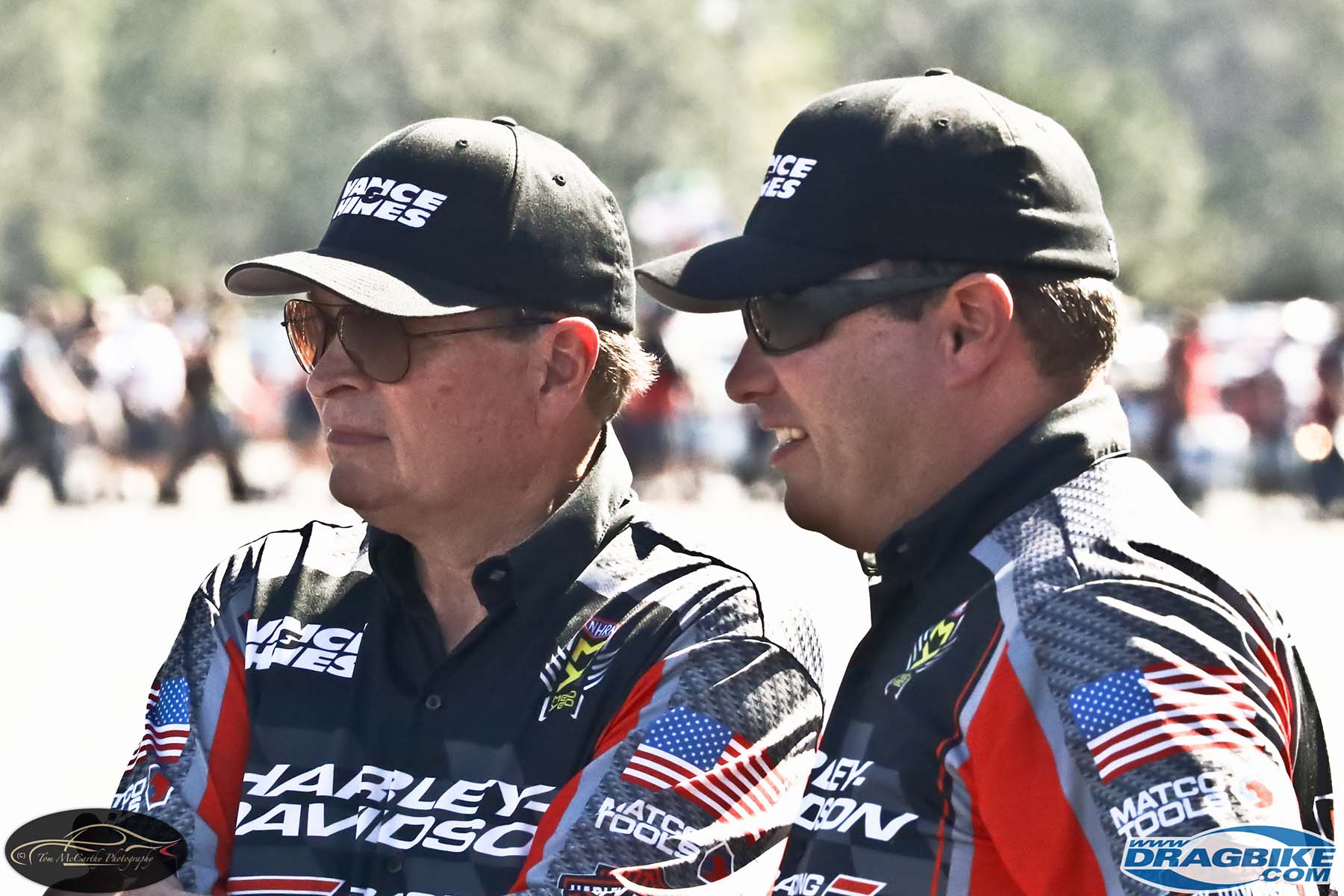 Byron’s good friend Terry Vance was as good with words as Byron was with intuitive mechanics. In short order, Byron introduced Terry to Russ. Terry convinced Russ Collins he could advance sales & marketing for R.C. Engineering and Russ hired him full time. Terry quit his printing shop job and then invested his time and efforts into Mr. Collins new business enterprise with vigor. 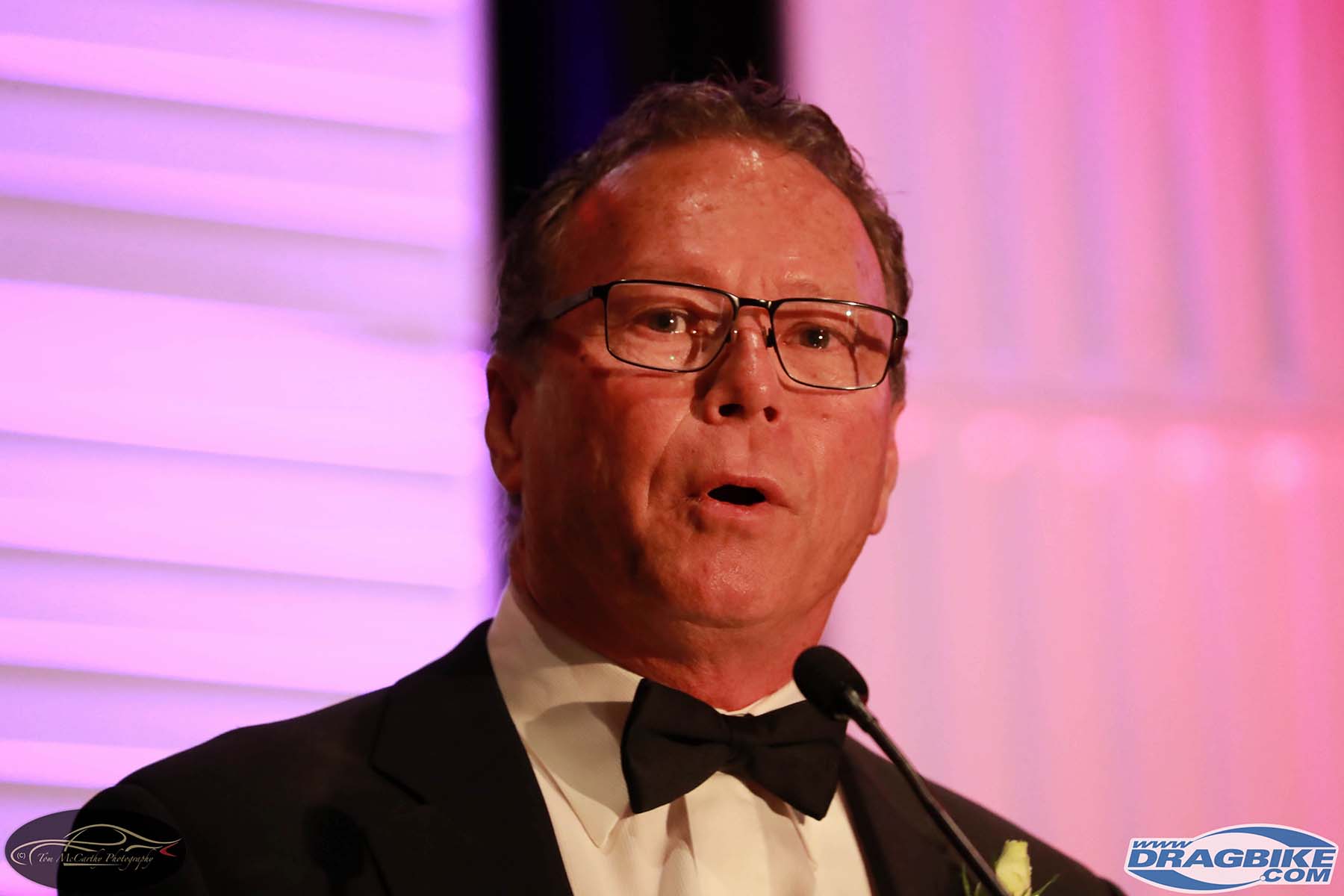 Tom McCarthy caught up with Terry Vance during the event and asked, “Terry, you and Byron are the first from the sport of motorcycle drag racing to be inducted into this prestigious Hall of Fame, how do you feel about that sir?” Vance responded, “It was humbling, very humbling. When you look around and see the level of people here, to be up on the stage with them – simply humbling.”

By 1973 in just a few short years the business was literally exploding and so was motorcycle drag racing as a sport. Now the AMDRA was a fully-fledged coast-to-coast endeavor and as motorcycle drag racers started piling on across the USA, the go-fast aftermarket business began booming exponentially. 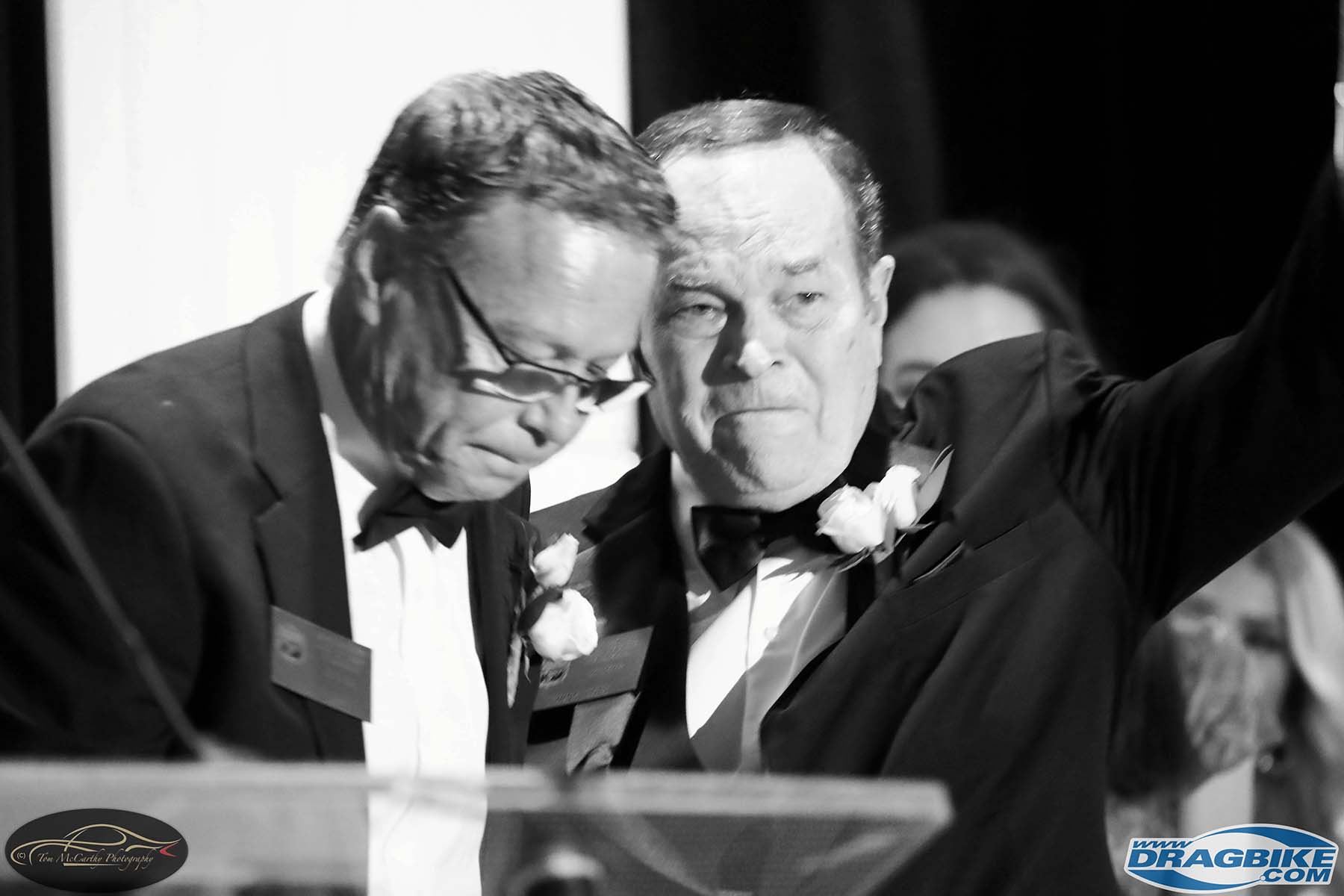 To support this, not only was R.C. Engineering having to hire new people constantly, but as a sales tool, Russ Collins built a three motor Top Fuel bike he dubbed the Atchison, Topeka, Santa-Fe, after a famous western railway. Russ and Slim Moffett did much of the grunt work in building the triple, while Byron and Terry pooled their assets and concentrated their efforts in building, a Top Gas bike for AMDRA competition. This required a hopped-up pair of 750 Honda motors, carbs, gasoline and a two-speed transmission.

In 1974-75, while Russ was flogging the “Tri-Clops” as it was sometimes called, Terry and Byron’s double engine Top-Gas bike was curb-stomping everyone at race tracks nation-wide. They won 22 of 23 races and only failed to win an event when the bike had a magneto failure – once. For two seasons they terrorized everyone in T/G. That bike now resides in the NHRA Museum in Pomona, California. 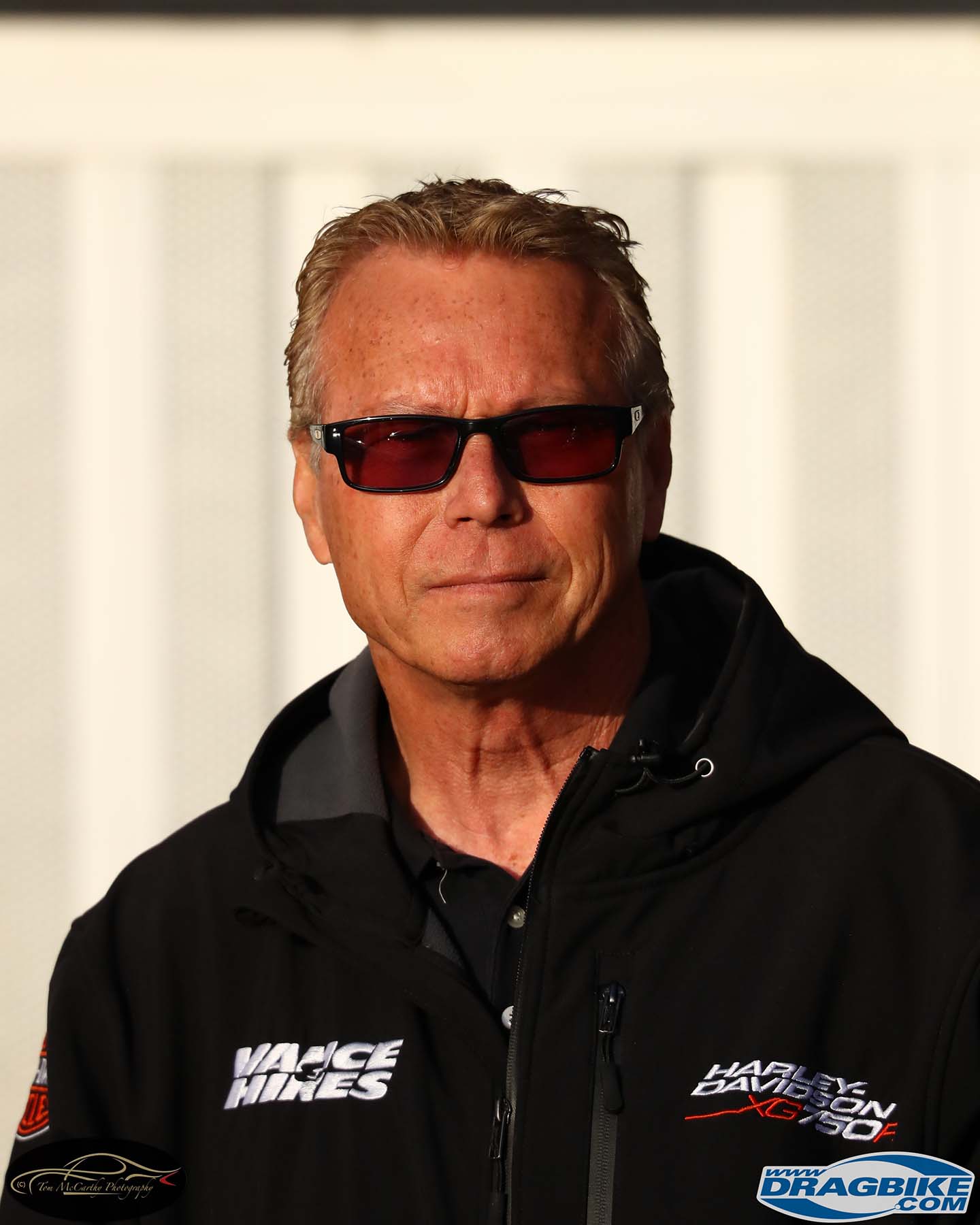 Significantly: in 1974, the AMDRA launched the new Pro Stock Bike class, following on the heels of the NHRA sanction model. Then mirroring the parent organization, by season’s end, in 1975, the AMDRA closed out the Top Gas class. This is when Terry and Byron began turning their focus to Pro Stock motorcycle drag racing, while Russ continued on with his Top Fuel efforts.

Russ felt that the class of Top Fuel was the best place to be as the biggest, fastest motorcycles, always got the most attention from the media and the fans. Terry and Byron could see the connection between aftermarket parts sales and the street bikes the customers rode. They simply saw things differently. So while Russ had designed a new Top Fuel bike to use two motors and a supercharger in 1976, Byron and Terry began honing their skills in Pro Stock motorcycle competition.

When Russ crashed his triple in 1976, while he was convalescing in the hospital, Byron forged ahead in completing the new T/F bike “The Sorcerer” which Russ had already begun. This project featured two highly modified 750 Honda motors. The rear motor had the head turned facing forward and they were secured in place with a supercharger located between them connecting the intake ports which were facing each other mid-line. It was a ponderous beast, brutally powerful.

The Sorcerer went on to not only win a few races and fame for Russ, but it’s 199.77 MPH record set in 1980, stood for close to ten years. It also cornered the shop it’s second “Best Engineered” award from the NHRA. It’s power was evident not only on the race track, but as an effective branding/marketing instrument. Everyone who was anyone associated with motorcycle drag racing by 1979, knew who RC Engineering was and knew of that Top Fuel bike. BUT, it was a money pit, frequently broken, expensive and time consuming.
In 1978, Terry and Byron had very different ideas about drag racing, marketing and how to go forward, and they soon split from R.C. Engineering. They did their best to leave gracefully. Terry and Byron had been investing their money, time and efforts in building their bikes and equipment. And for them, it was time to move on. 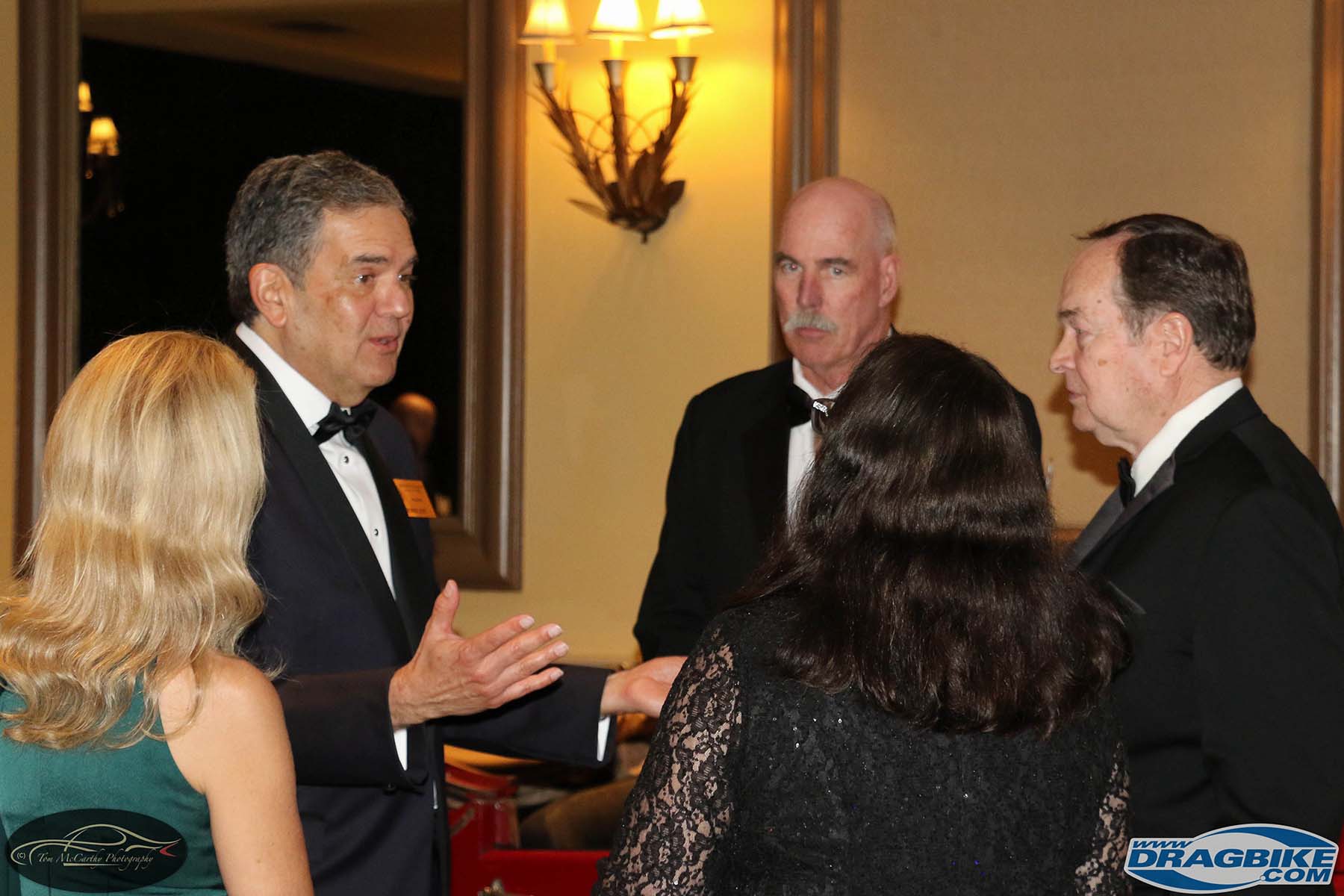 They were solidly concentrating their primary focus on Pro Stock motorcycles and the exploding aftermarket boom of making and selling what they raced to their customers, who were racing and riding the same makes and models of motorcycles on the street. Terry and Byron notched wins in Pro Stock with their P/S Honda first, then two years in a row with their Kawasaki, 1976-77 and in 1978 began racing with Suzuki Motor Co.

In 1979, Terry and Byron launched Vance & Hines as a company and the business took off like one of their drag bike creations. Every year it grew exponentially. While they did their best to put all the new people in the right places, Byron continued to make more horsepower year after year and Terry honed his driving skills.

They were not only in contention for Pro Stock Bike championships every year, they built a Top Fuel motorcycle to go after the 200 MPH mark. They reached it on a Wednesday night at Orange County International Raceway, while testing, stopping the timers with a 6.98 @ 203.61 MPH pass. They even succeeded in winning two Top Fuel motorcycle championships during their short time in the class, 1981 to 1984. But their heart was always with Pro Stock motorcycles. They built the Top Fuel bike, just to prove a point: they can win in any class they race in.

From 1984 on, their focus was decidedly on Pro Stock motorcycle racing. When the premiere motorcycle drag racing sanction of the day, the NMRA ceased racing operations at the end of the 1984 season, Terry and Byron redoubled their efforts in not only building P/S motorcycles, but in building the class as an official race category with the National Hot Rod Association. Which was the biggest racing sanction and the most professional in drag racing, at that time.

Terry and Byron then became the liaison between the racers and the sanction. They made sure Tech was right and answered Tech questions for the class for NHRA. In effect, V&H played a vital role in developing the P/S motorcycle class with NHRA. It took another four years until the NHRA finally adopted PSM as an official NHRA class of competition in 1988. The year Terry finally retired from his role as a drag bike pilot. 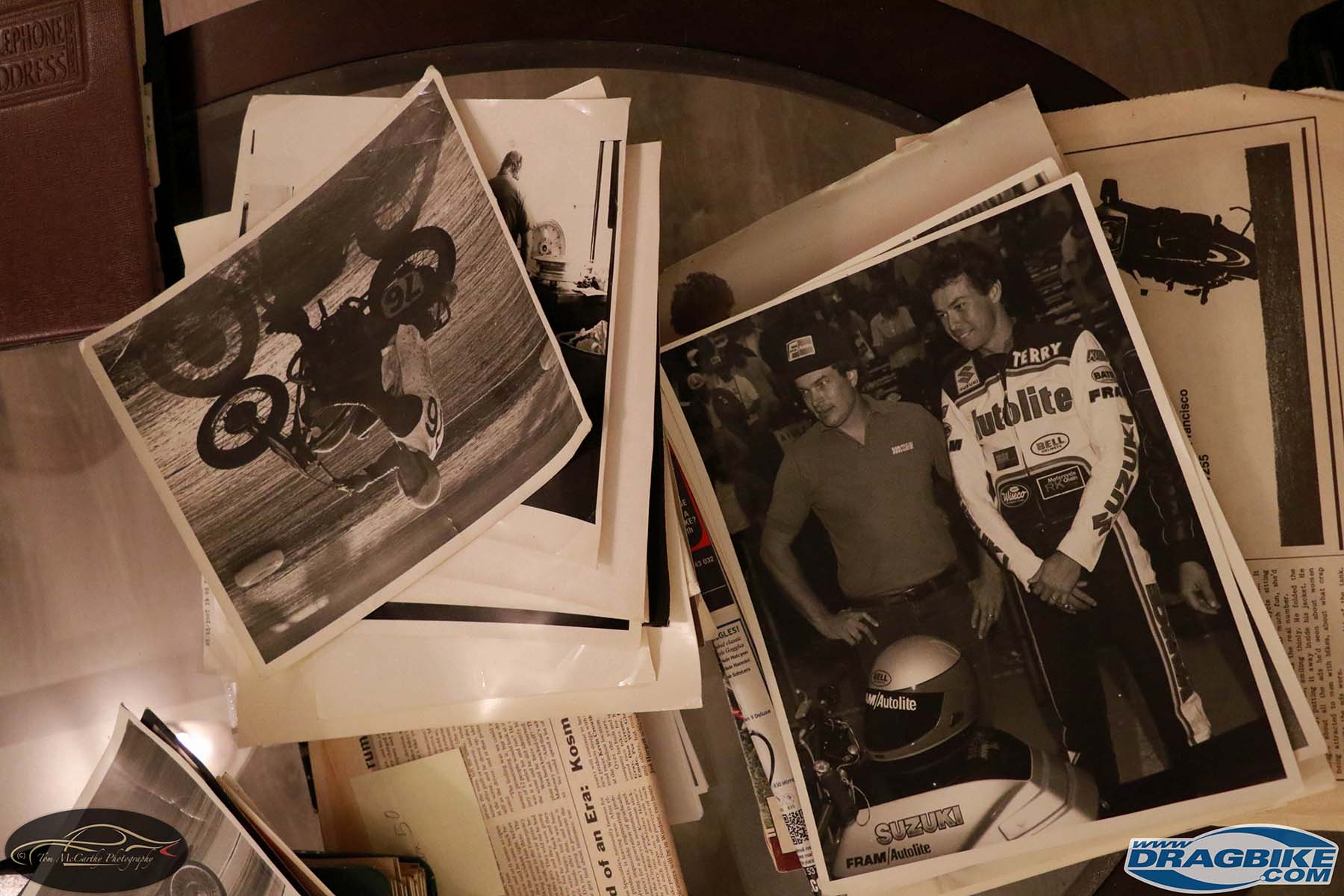 Terry and Byron, while in competition as PSM racers netted 27 NHRA National event wins and amassed 14 National Championships in the process before Terry hung up his leathers at the end of the 1988 racing season.

In the decades that followed, V&H became involved with AMA Pro AM racing, AMA Superbike, and Super Sport. Their competition motorcycles have won titles with Yamaha, Ducati, and eventually, Harley Davidson bikes. The company itself, by the mid 2000 era; the business had close to 600 employees on the payroll. Their success could only be described as stellar.

Terry Vance and Byron Hines have accomplished a phenomenal amount during their 52 years of being involved with motorsports. Terry is very proud of the many long-term employees of V&H who stayed with the company for decades and were able to retire comfortably. Byron has kept V&H horsepower winning races and setting records for over 50 years as of this writing and they continue to do so.

Most racers only dream of such accomplishments. Terry Vance and Byron Hines lived this dream, like the legends they are. Their place in the Motorsports Hall of Fame of America is rightly deserved.